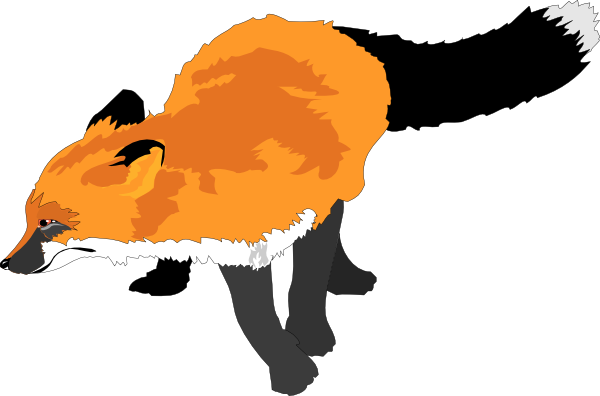 The word shenanigan (a deceitful confidence trick, or mischief) is considered by some to be derived from the Irish expression sionnachuighim, meaning ‘I play the Fox’. That’s by no means the only definition of shenanigan that you’ll find, but – for me – it’s a good one.

The Red Fox stops by Nead an Iolair on most days. He’s such a frequent visitor that he’s trodden a furrow across the lawn – which he follows meticulously in order to keep his feet dry: he’s a fastidious creature is our Ferdia. 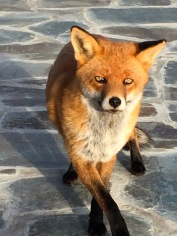 It’s a bit unkind, perhaps, to always think that the Fox is up to some kind of shenanigans. That would be playing up to his reputation of being cunning or sly. Our Ferdia is pretty open about why he takes an interest in us – purely and simply, it’s his stomach. His patter is always the same: he stands at the window and presses his nose against the glass, managing to look somehow downtrodden or neglected (we know he isn’t at all – in fact his current winter coat is magnificent: not just red, but with a silver grey sheen, and his legs, paws and ears are a beautifully velvety black).

The Irish word for Fox is Sionnach, and there are stories that this animal was brought over here by the Vikings, who reputedly used them for hunting. Now the tables are turned: in Ireland Fox hunting is a legal sport (which it no longer is in Scotland, Wales and England), and we have very occasionally seen The Hunt crossing the fields during our travels. If you read the highly amusing Irish RM by Somerville and Ross you will quickly gather that actually apprehending a Fox is something very rare for The Hunt: more usually it results in a loss of balance, life or dignity for the participants. This is probably a realistic picture: Edith Somerville was herself a MFH and therefore had considerable experience in the matter.

Well, Ferdia’s ploy usually works, and he frequently deprives us of the last morsel on our own plates. I’m sure I’ve heard him chuckling to himself as he disappears off into the fields clutching a bone or three. Foxes are good family animals: generations can live together for a few seasons, helping to look after the succeeding offspring – the collective noun for Foxes is A Skulk. Ferdia himself has got his act together: if we give him some scraps he’ll eat a good chunk first and then carry the rest off home – which I’ve worked out is quite a distance away. That’s fair enough: as Alpha Male and number one provider it wouldn’t do if he was debilitated with hunger.

We have on occasion seen Ferdia lead another Fox into the garden – either a wife or a daughter, but they are so nervous that their visits are rare and short. Ferdia, on the other hand, is totally confident that he’s got us wrapped around his little finger… In the summer he has been sitting out with us on the terrace, passing the time of day in a very relaxed fashion. 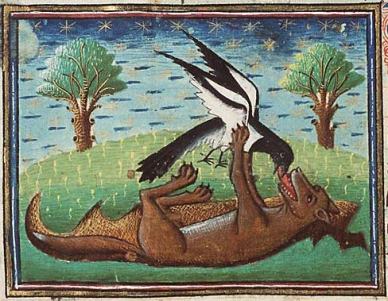 Only yesterday I noticed our Fox sorting out some scraps on the lawn. Suddenly, there came into view two magpies. As I watched, one of them hopped around to the front of Ferdia and he stopped what he was doing to chase it away. Immediately, the other Magpie jumped in and took a good helping. Ferdia rushed at this competitor, and Magpie number One hopped in and had his share… From which I deduce that the cunning of Magpies is equal to that of the Red Fox.

In folklore, the Fox has a big presence. The animal is said to be able to foresee events including the weather and its barking is said to be a sure sign of rain (the only time we heard Ferdia bark was when we hadn’t noticed him standing at the window).

It is thought to be unlucky to meet a woman with red hair when setting out in the morning, especially if you are a fisherman. We may assume that the woman is a Fox in disguise.

There are legends about both St Ciarán and St Brigid finding and taming a Fox, and there are medieval carvings in churches showing Foxes: in one instance a Fox is in a pulpit preaching to Geese! 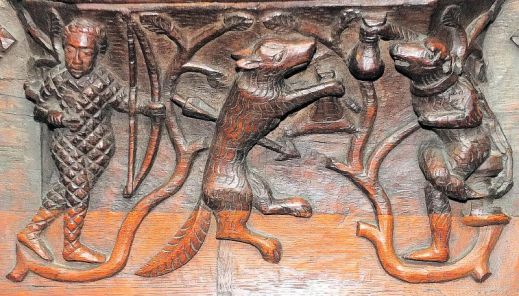 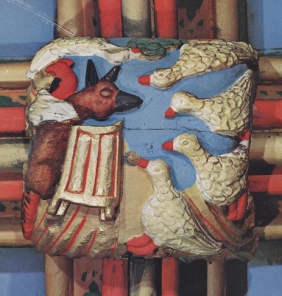 The story of Fox and Goose has been immortalised in what is reputedly one of the oldest folk songs in the English Language: The Fox or Daddy Fox. This version is from the 14th century:

‘for I am comyn to toowne’

It fell ageyns the next nyght

the fox yede to with all his myghte,

whan that he cam vnto the town.

When he cam all in the yarde,

‘I shall macke some of youre berde,

or that I goo from the toowne!’

when he cam all in the croofte,

‘for here haue I be frayed full ofte

whan that i haue come to toowne.’

he hente a goose all be the heye,

faste the goos began to creye!

sche shall go vnto the wode with me;

sche and I wnther a tre,

I haue a wyf, and sche lyeth seke;

many bonys they must pike 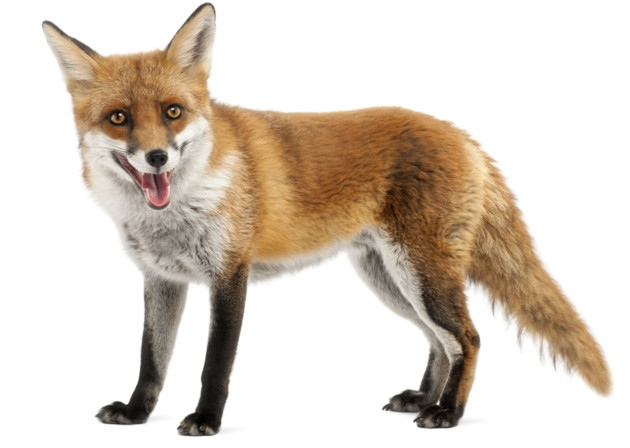 The fox went out on a chilly chilly night

He prayed to the moon to give him light

He had many many miles to go that night

Many many miles to go that night before he reached the town-o.

He ran ’til he came to a great big pen

Where the ducks and the geese were kept therein

He said a couple of you will grease my chin

A couple of you will grease my chin before I leave this town-o.

He grabbed the grey goose by the neck

And he threw a duck all across his back

Out of the window she pushed her little head

And the fox is away to his den-o.

Well, the fox he came to his very own den

And there were the little ones, eight, nine, ten

‘Cause it must be a mighty fine town-o.

Well, the fox and his wife without any strife

Cut up the goose without any knife,

They never had such a supper in their life

They never had such a supper in their life

And the little ones chewed on the bones-o.