The first act of the Irish Free State after independence was to paint all the post boxes throughout the country green. It was a brilliant stroke – royal red replaced by emerald green in one of the most visible and ubiquitous symbols of national administration.

The Penfold post box in Skibbereen, one of only a handful left in Ireland

Ironically, the post boxes themselves did not change, so the royal insignias were simply over-painted by the new colour. The result was a charming mixture of tradition and adaptation that serves as an ongoing reminder of the history of Ireland and its institutions. 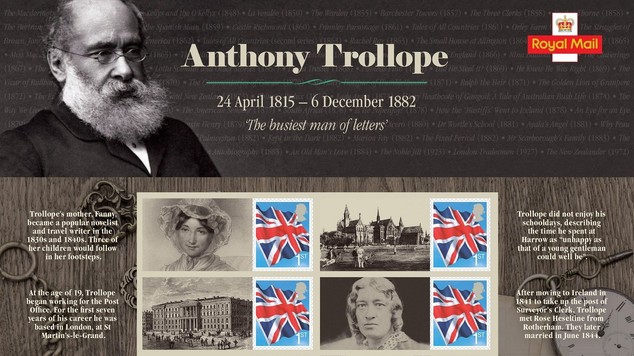 The first post boxes were introduced to Ireland in the 1850s by the novelist Anthony Trollope, then a Surveyor for the Post Office. Trollope was happy in Ireland and wrote several novels and stories set here, although they are not the works for which he is most remembered. 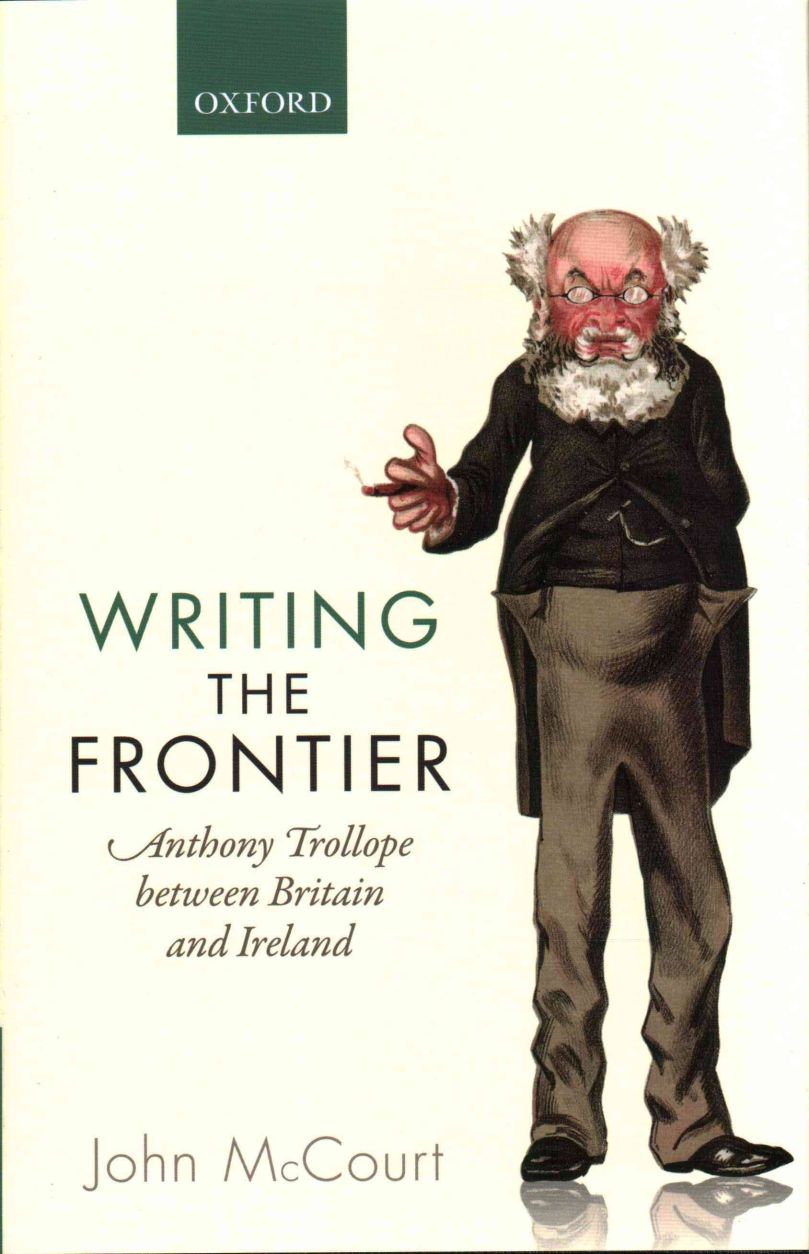 We don’t usually think of Anthony Trollope as an Irish novelist but he lived here for almost 20 years, spent working for the Post Office and writing

One of the earliest models for a free-standing post box came to be known as the Penfold, after its designer, J W Penfold. They were manufactured and deployed from 1866 to 1879 and very few have survived in Ireland to this day – only six are known and of these only three are still in operation. Skibbereen has one of those, and very fine it is: one hundred and fifty years old and still in daily use! 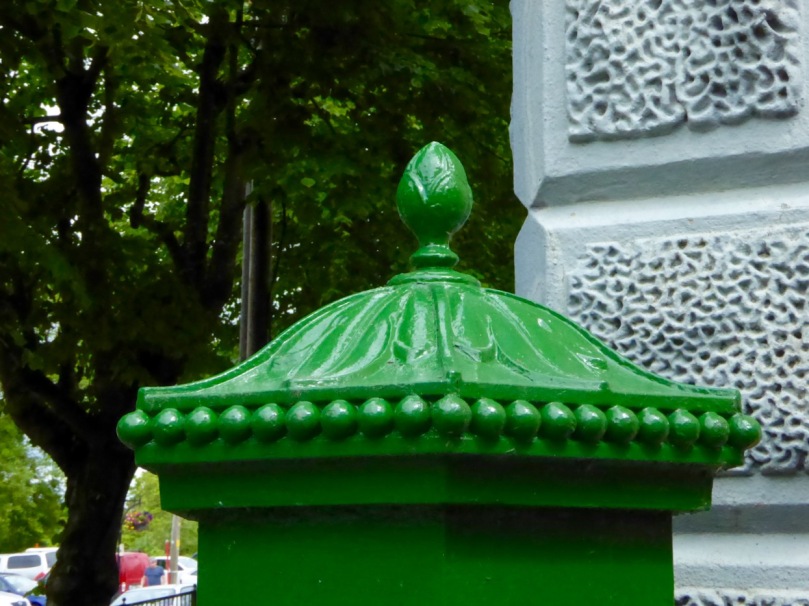 The hexagonal Penfold designed was apparently inspired by the Temple of the Winds in Athens (although the Temple is octagonal), with the addition of an acanthus leaf on the cap and a smart bud-shaped finial and beading.

Photograph of the Temple of the Winds from Wikipedia

Our Skibbereen Penfold is in excellent condition: note the royal insignia and the entwined VR for Victoria Regina.

The Penfolds were replaced by round pillar boxes because there were too many complaints that the hexagonal design caused letters to stick. These cylindrical boxes can be seen everywhere in Ireland still, although mostly in towns and cities. The one below is on Grand Parade in Cork.

In his book The Irish Post Box, which I gratefully acknowledge as the source of much of the information in this blog post, Stephen Ferguson describes the three main types of post boxes that have been developed for use in Ireland: pillar, wall and lamp. In rural areas, such as West Cork, wall and lamp boxes are the most common forms I have encountered.

Here’s a representative wall box in Skibbereen. Interestingly, it’s part of a mini-complex of historical markers including the plaque to the Clerke sisters (see my posts From Skibbereen to the Moon Part 1 and Part 2 for more about these remarkable women and their family) and signs for the Skibbereen heritage walking trail, all mounted together on the wall of what was the main bank in Skibbereen during the Famine period.

The box was manufactured by W T Allen and Co of London and bears the ornately scrolled insignia  and crown of Edward the VII, which places it between 1901 to 1910.

Here’s another nice one in Bantry, a Victorian one, although this time the VR lettering is simpler than on the Penfold. This one has been painted so often that the embossed POST OFFICE on the protective hood has almost disappeared under the layers.

Lamp boxes were designed for remote areas where a suitable wall might not be readily available. Ferguson explains:

Lamp post boxes, based on a design used by the United States Postal Service, were first introduced in 1896 in London as a response to calls for more post boxes throughout the city. Affixed to a street lamp, the boxes were used at locations where the expense of a pillar or wall box could not be justified. In Ireland, however, they were often deployed in rural areas where, attached to a telegraph or specially erected pole by metal clips, they were very useful in extending postal collections to remote and sparsely populated regions. Tucked under hedges or used sometimes as a smaller version of a wall box, these post boxes were relatively cheap to make and easy to install and they symbolise…the extraordinary influence and reach of the Post Office as an institution at the height of its powers.

Driving or walking around rural Ireland, look out for ‘lamp’ boxes. Here’s one from the road near Barley Cove.

A closer inspection reveals this one bears the P & T logo that was in use between 1939 and 1984, before it was replaced by the brand ‘An Post’. Sometimes the old royal initials were ground off the boxes, or sometimes the doors were replaced with new ones bearing the P&T lettering, but it seems that considerations of cost (always paramount with the careful Post Office) allowed many to simply remain in place as they were. In the early years of the new state, some were embossed with the Saorstát Éireann logo (even sharing the door with a VR insignia) but that practice was relatively short lived and I have found no examples to it yet in West Cork. The website Irish Postal History has this example from Washington Street in Cork.

On Cape  Clear – the most scenic post box in Ireland?

If no lamp post or suitable pole existed, a simple stake was erected to which a box could be attached. Cape Clear Island didn’t get electricity until the 1970s, so this post box (above and below) must predate the advent of poles. The logo, however, is that of An Post, which was established as the new brand in 1984. Perhaps the poles were only erected island-wide after the submarine cable was laid in the 1990s.

Not all mail boxes have been retained for active use – so what happens to them? Many simply remain in situ, as a picturesque reminder of times when we actually wrote to each other instead of texting or emailing. The one below at Rossbrin, near Ballydehob, was once attached to the wall outside the old schoolhouse. The first photograph at the start of today’s post shows its location.

And this one, at Ahakista, has been repurposed as a wayside shrine.

But even if it’s still in use, sometimes a mail boxes can’t be used for its real purpose, but has more important work to do! I don’t know where this last photograph was taken or whose work this is – it was widely circulated on the internet – but I would be happy to credit the photographer if I knew who it was. Delighted to have this also as an example of a post box from the reign of George V, 1910 to 1936. 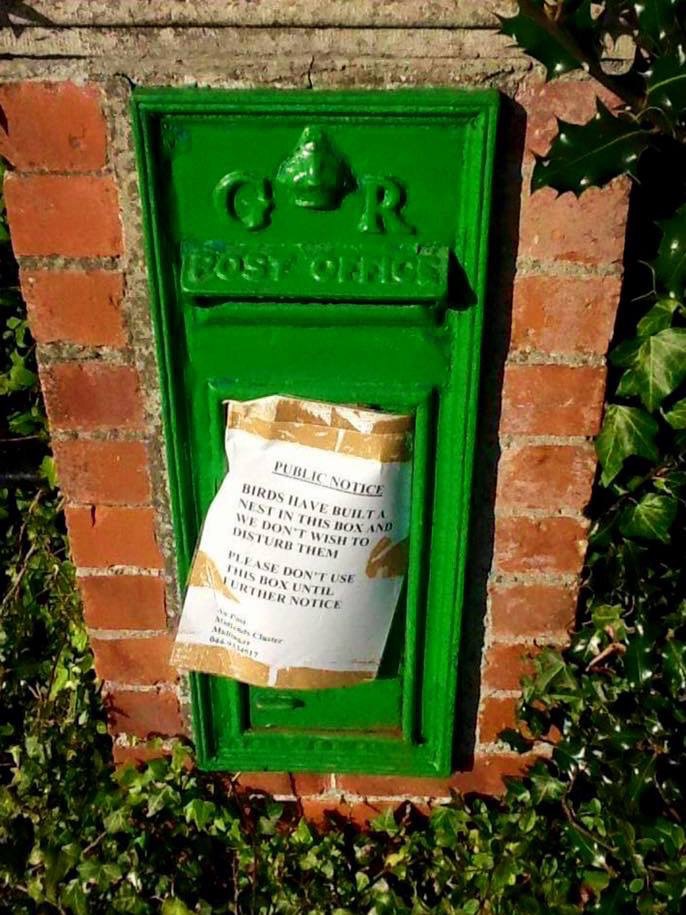