Our walk in Glengarriff Woods opened my eyes to the challenges facing us in regards to ensuring the continuing biodiversity of Ireland. Loss of habitat, invasion of alien species, climate change, and modern farming practices all combine to present our insect life with increasing difficulty in obtaining what they need to thrive. Perhaps the best-known (although not the best understood) example currently is the enormous die-off of the bee population, known as colony collapse.

With this in mind, I have been observing the bees, butterflies and bugs in our neighbourhood, and the role of flowers, both wild and cultivated, in supplying the food and the nectar they need. We have the advantage here that the hedgerows are rich in flowering plants, and that by regulation they must remain uncut until the end of August. 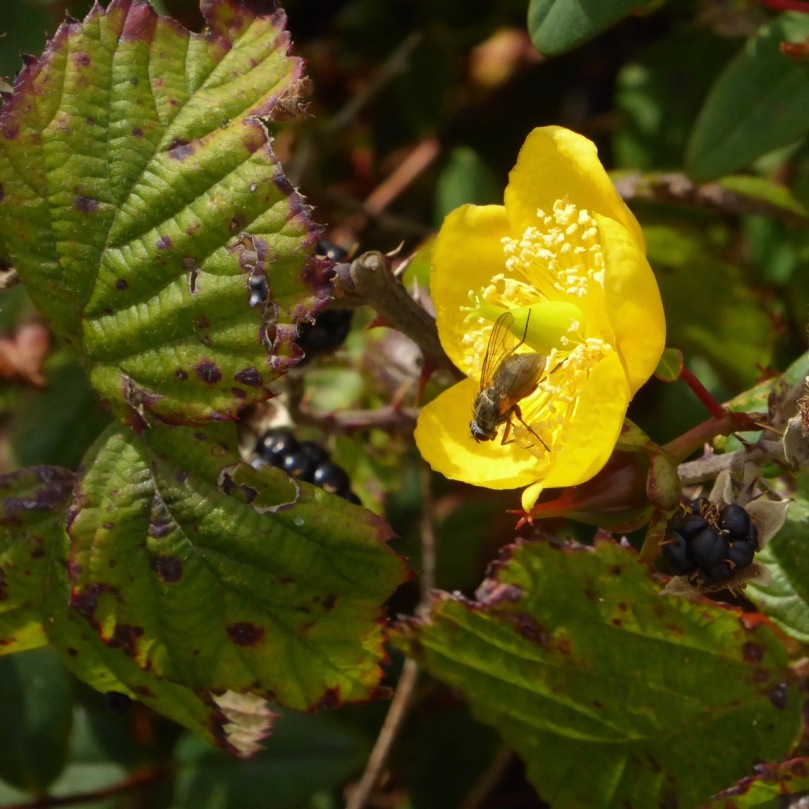 But this has been a short, cool summer and already the flowers that we saw last year in September have gone, to be replaced with the browning bracken. Our Budleia, for example, also known as the Butterfly Bush, was still attracting butterflies in September last year but this year it’s been flowerless since late August.

A speckled Wood Butterfly and a Hoverfly enjoy some blackberry time

On the upside, we’re enjoying a bumper blackberry crop, and lots of insect seem to love blackberries as much as we do. Because of the way blackberries grow, ripening at different times, some brambles are only flowering now, providing nectar for the bees.

This photograph, showing a riotous mixture  of Great Willowherb and Montbretia (Crocosmia) was taken at this time in 2015: this year all these flowers have finished already.

This year the holly flowers are abundant – here they are about to bloom. The berries are honeysuckle berries

The fuchsia is still flowering, providing that gorgeous blush along the boreens that we love. One of the advantages of the fuchsia flower is that it is down-facing. This helps to keep it dry and preserve the nectar (see photo at beginning of post).

We have two types of bindweed here: hedge bindweed in the upper photo; a subspecies, the uncommon hedge bindweed ‘roseata’ is lower right ; lower left is sea bindweed, which grows along sandy shores

We might hate bindweed but it is an important flower for the bees. The hedge-bindweed we see around here has pretty pink and white stripes – apparently the white stripes act like a runway, guiding the insects into the heart of the flower. 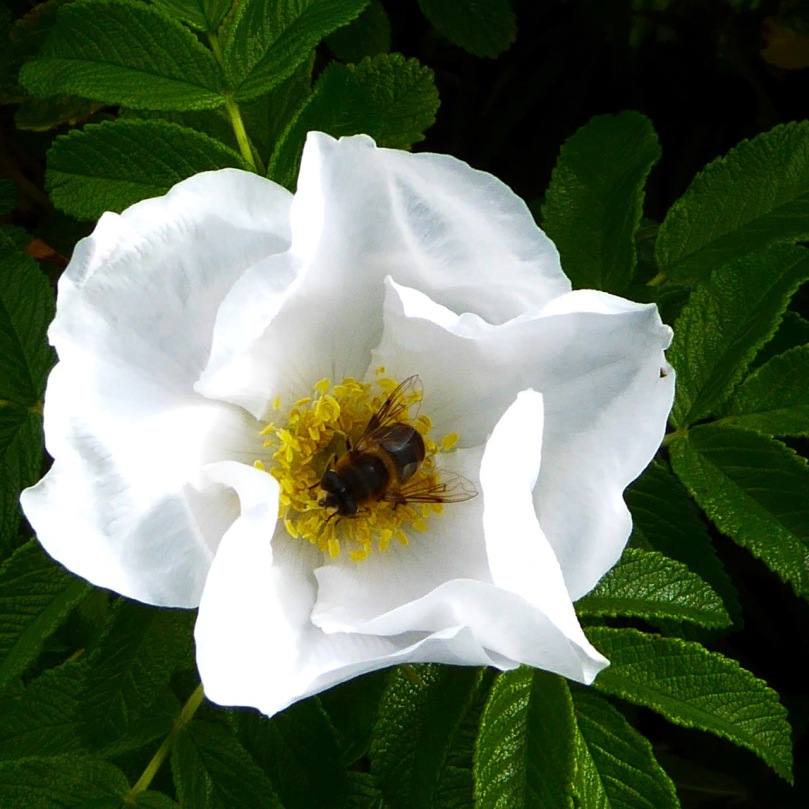 Wild and cultivated roses are still blooming, here and there. This little guy is appreciative.

My  friend Gill grows sedum (upper two photos) and the bees love it. You can hear the hum from ten feet away. Meanwhile, Helen and William’s garden (lower photo) attracts butterflies by the score. I saw my first Red Admiral there last year. 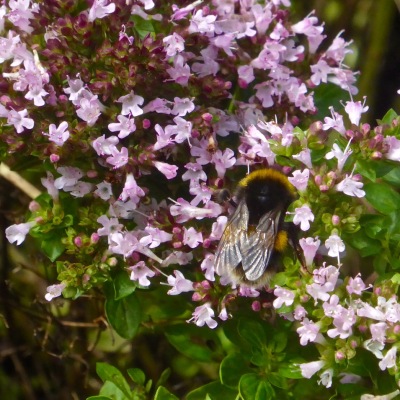 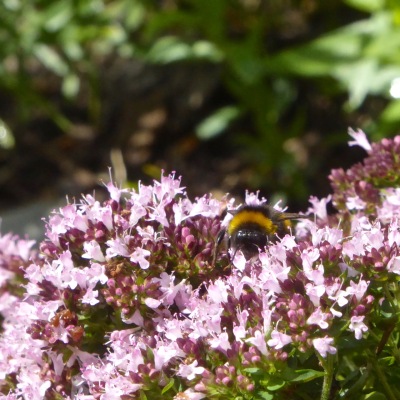 A Small Tortoiseshell Butterfly enjoys my Oregano, along with the bumbles bees

In my herb garden it seems to be the Oregano that is attractive to both bees and butterflies. It’s just finishing its flowering period now, but I still have to be careful when I pick a bunch, not to pick a bee as well.

Flies and spiders need the flowers too. Hoverflies are an important part of the ecosystem, helping to pollinate and preying on aphids and thrips. They (and the wasps!) seem to prefer my fennel. They also like the little pink Herb Roberts that are still to be seen in the hedgerows.

And what about the Honeysuckle? It’s abundant and beautiful, and with a name like that surely it’s a-buzz with bees? No – apparently the flower is too long and the bees can’t reach in far enough to gather the nectar. But the sweet scent, which gets even more intense towards the evening, calls in the moths who take their fill. 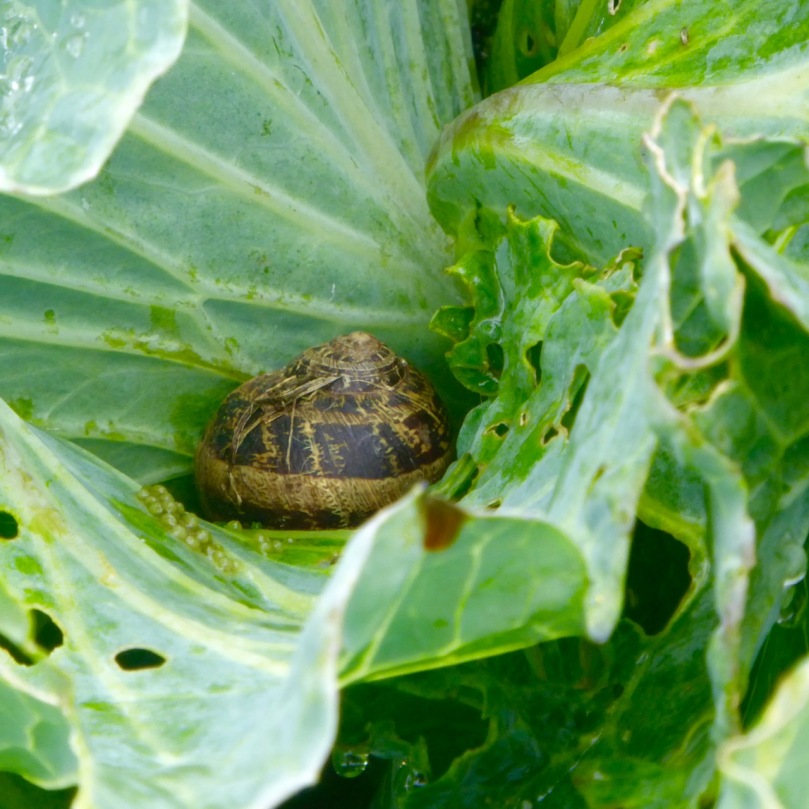 Ah, but y’know – you can’t always welcome little critters to your plants. Sometimes, it’s us against them.

And of course, sometimes the plant isn’t so much food, as a means to an end…