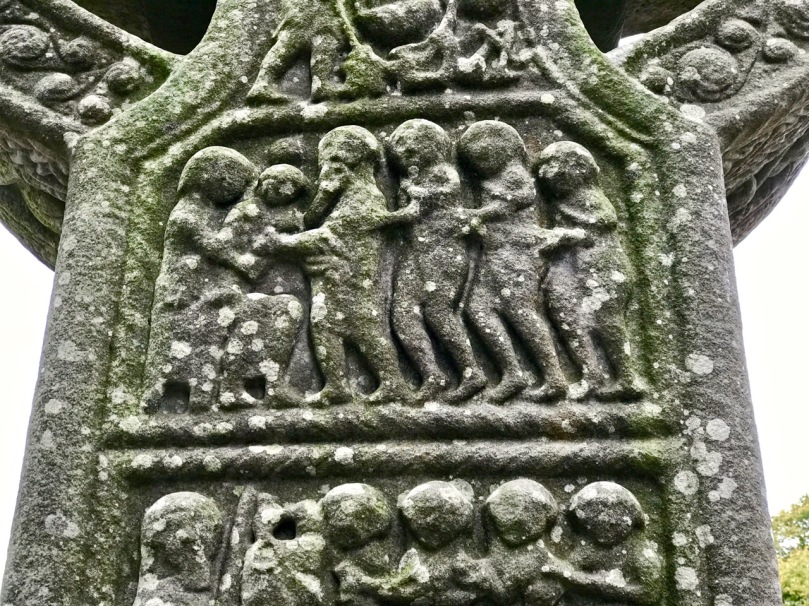 In our recent journeys around Ireland we both had opportunities to indulge our particular interests. Among them, Finola was able to take in some fine examples of stained glass and Romanesque architecture, while I concentrated on the beautiful medieval carving of a number of Irish High Crosses, to add to the examples I have written about recently. 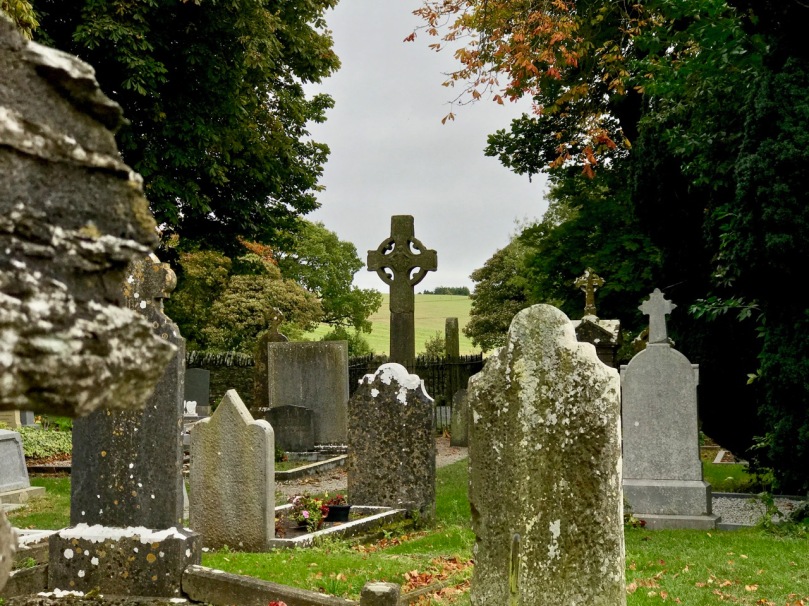 For any Irish High Cross enthusiasts (I suspect that there are many of you out there), Monasterboice in County Louth has to be on the list of ‘must see’ places. It was founded in the 5th century by Saint Buithe, a follower of St Patrick – the Irish Mainistir Bhuithe means Monastery of Buithe – and was an active and important Christian settlement through to the 12th century, when its importance was eclipsed by Mellifont. I found out that St Buithe ascended into Heaven by climbing a ladder that was lowered down to him for the purpose.

Left – a photograph of the great cross at Monasterboice – known as  Muiredach’s Cross – taken in 1905 and, right – the same west face seen today. Finola is there to show its true scale: remarkably it is 5.5m tall

Muiredach mac Domhnaill, who died in 923, was an Abbot at Monasterboice. He is  credited with commissioning the great cross, shown above. It’s not quite the tallest high cross in Ireland, but it’s said to be the finest, probably because of its stature and remarkable state of preservation. The carved panels are all legible, and the biblical stories illustrated have all been identified. An inscription on the lower section of the cross shaft states: OR DU MUIREDACH LASNDERNAD IN CHROS – A prayer for Muiredach under whose auspices this cross was made. Confusingly there was also a king, Muiredach mac Cathail, who owned the lands on which the monastery was built. He died around 867, so it is possible that the cross was commissioned by him, or was made in commemoration of him, rather than by the Abbot.

The Office of Public Works has responsibility for overseeing the site at Monasterboice. The well produced information panel details the carvings on Muiredach’s Cross 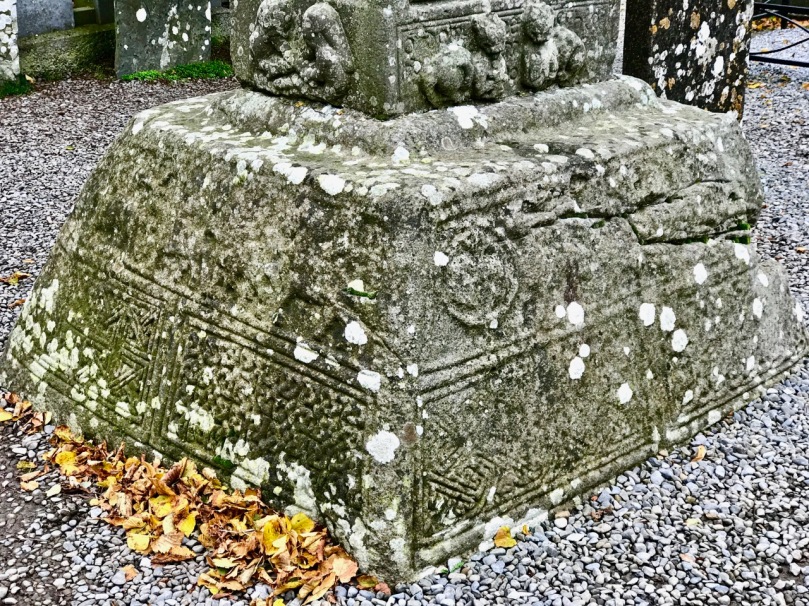 A gallery of detailed carving work from Muiredach’s great cross: the subjects include Adam and Eve and Cain and Abel; Celtic knotwork; Moses striking the rock; the crucifixion and (header) nativity scene with the Magi. The lowest picture, above, shows the decorated base, which is shaped like a saint’s reliquary and the panel with two cats and the prayer for Muiredach

This wealth of medieval art is only part of the site’s wonders. There are two more complete High Crosses, fragments of other carvings and slabs, and a round tower. The Tall Cross or West Cross is the highest in Ireland, at nearly 7 metres. Because of its size it has the greatest number of carved panels of any Irish High Cross. However, these panels are suffering from weathering much more than Muiredach’s Cross, and their present state must raise concerns for all the carvings at Monasterboice. At other sites, crosses have been sheltered (Moone) or moved into buildings (Clonmacnoise, Durrow). 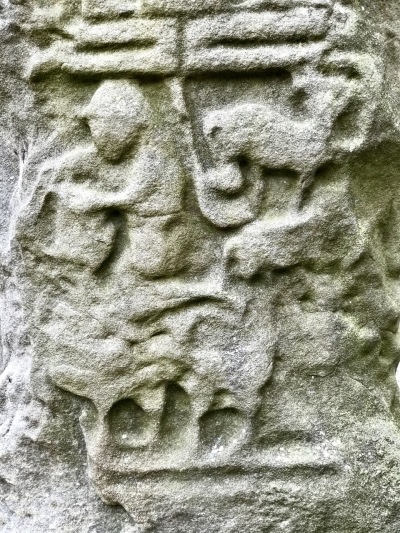 The Tall Cross (or West Cross) at Monasterboice; left – in context with the round tower beyond; right – an example of a badly weathered panel on the Tall Cross

Upper – the west face of the Tall Cross cross-wheel, which is in comparatively good condition, and lower – the east face. The number of scenes depicted on these panels alone is remarkable 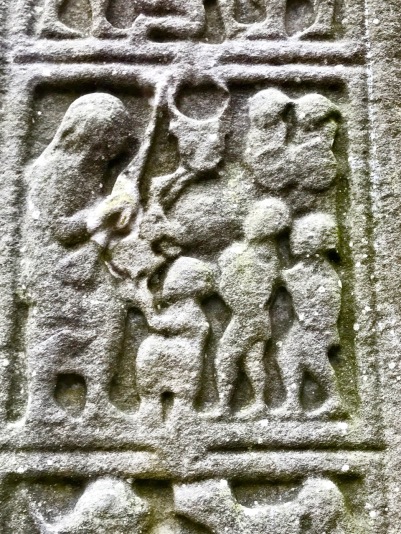 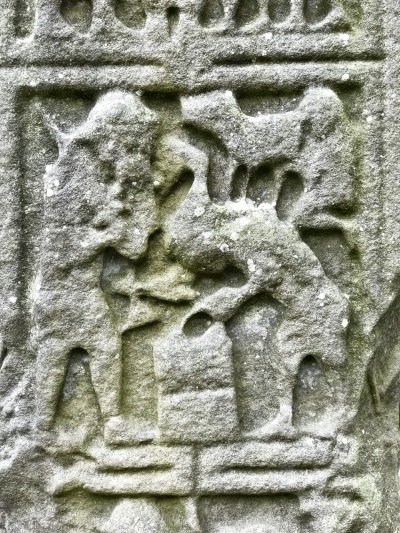 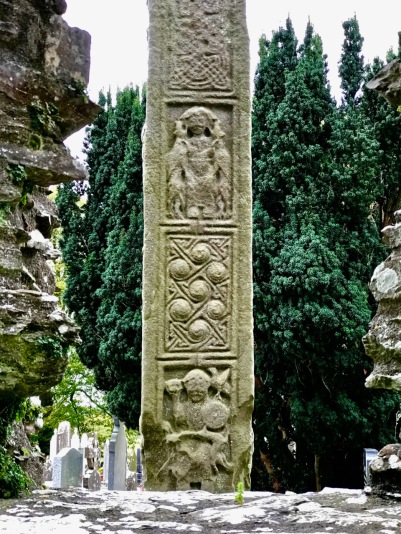 Carved panels on the Tall Cross at Monasterboice and – lower – a study of Celtic knotwork found on Irish High Crosses, taken from MUIREDACH – Abbot of Monasterboice 890-923 AD by R A S McAlister MA FSA, Dublin 1914

There is a third High Cross at Monasterboice, known as the North Cross. It is less spectacular, perhaps, than the large ones, and the carvings are comparatively minimal. Nevertheless, its modesty gives it a somewhat more refined character. Close to the North Cross are some fragments, including part of a medieval sundial – reminiscent of the one we saw at Kilmalkedar, County Kerry, earlier this year.

Upper – the North Cross with the round tower in the background; lower left – North Cross east face and, lower right – nearby fragment of a medieval sundial

Monasterboice displays so many wonders. Yet, in some ways, it’s an uneasy site. It’s probably not helpful – but perhaps essential – that the parking area a little way off is rife with warnings about thieves, and broken glass is evident. There have also been reports of vandalism against the monuments themselves – emphasising their vulnerability. The place is of major importance: during the summer season the site is attended, and guides are available. We were there in early October, when no-one was around. 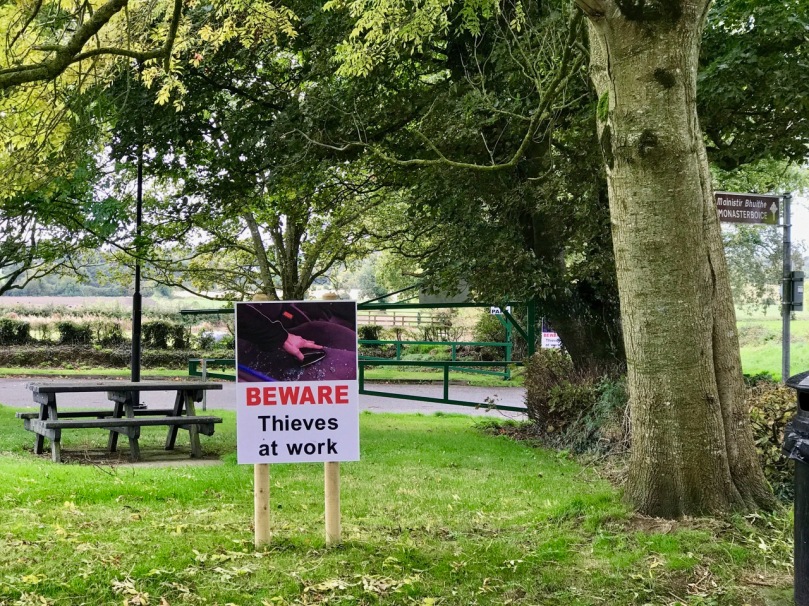 This site – and similar ones all across Ireland – are vitally important to the heritage of this country. The artefacts are irreplaceable, yet too little resource is given to protecting them – from weather and people. As we know from our forays into the world of Prehistoric Rock Art, stone carvings are fragile, and under-appreciated. There’s no obvious easy solution, apart from them being given higher status and priority by the empowered bodies such as the Office of Public Works. They, in turn, need to be given more support by the State, particularly in terms of funding: they do the best they can with very limited resources.

Cats on the base of Muiredach’s Cross, recorded  by McAlister in 1914: 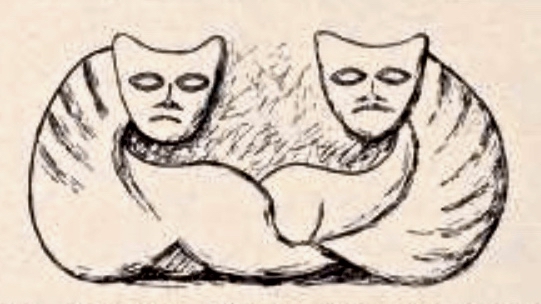