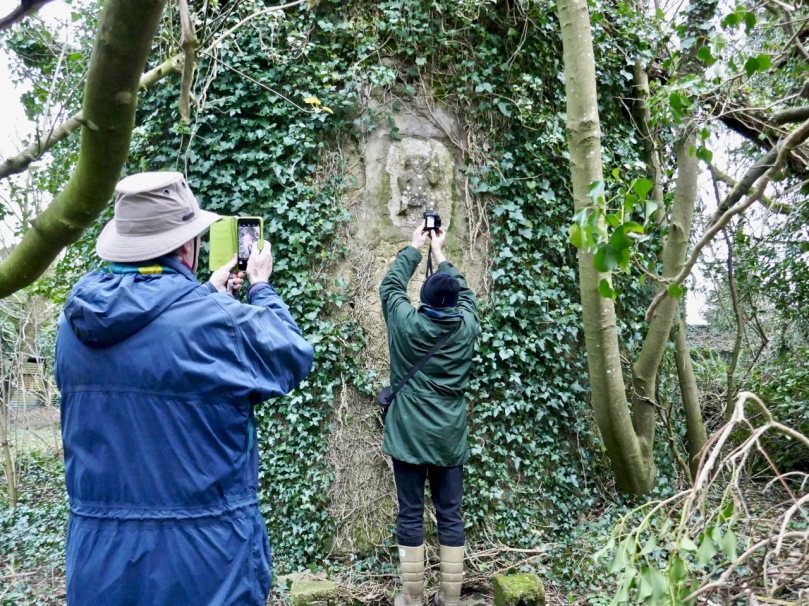 The sheela-na-gig is one of Ireland’s most mysterious historical artefacts, and one that has fascinated professionals and amateurs alike since the antiquarian days. What is a sheela-na-gig? It’s a carving of a female figure (mostly – there are also male figures, or seán-na-gigs), often crudely executed, with the focus on the hands reaching down to display the vulva. The female is often described as aged, or a ‘hag’ and the carvings have certain features that are common to many, such as staring eyes, ribs, stylised hair and breasts. 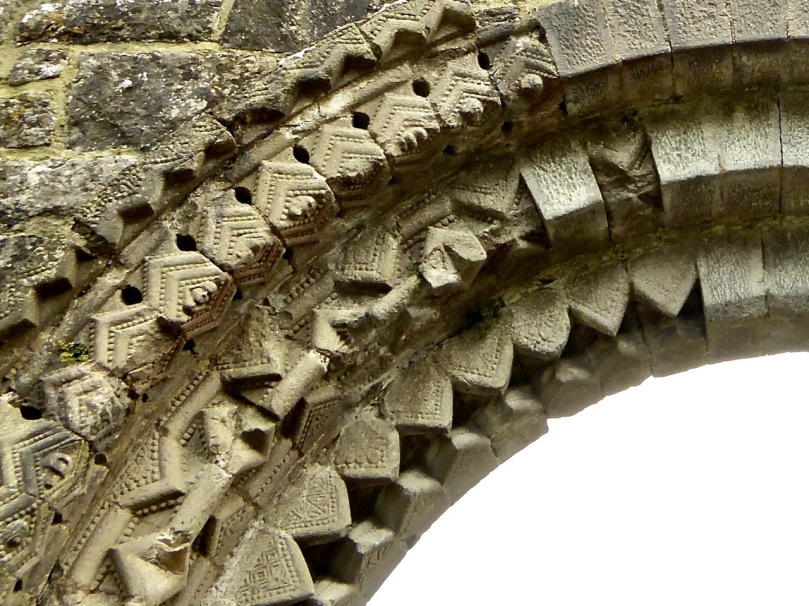 This is a romanesque arch at the Nuns’ Chapel in Clonmacnoise. Can you make out the tiny exhibitionist figure carved into one of the lozenges?

The carving of Sheelas probably started in the 12th century, as part of the corpus of fanciful or grotesque carvings that were used to decorate romanesque churches. Some are still found in romanesque contexts, especially outside of Ireland. In Ireland, two possible romanesque examples I have seen are at Liathmore and at the Nuns’ Chapel at Clonmacnoise. However, most Irish sheelas appear to have been either separated from their original locations or carved later, possibly up to the late 1500s. They are found on medieval churches, 17th century castles, the sides of old barns, at holy wells, and indeed in museums. Sheelas have been stolen, lost or destroyed and many of the existing sheelas are damaged. 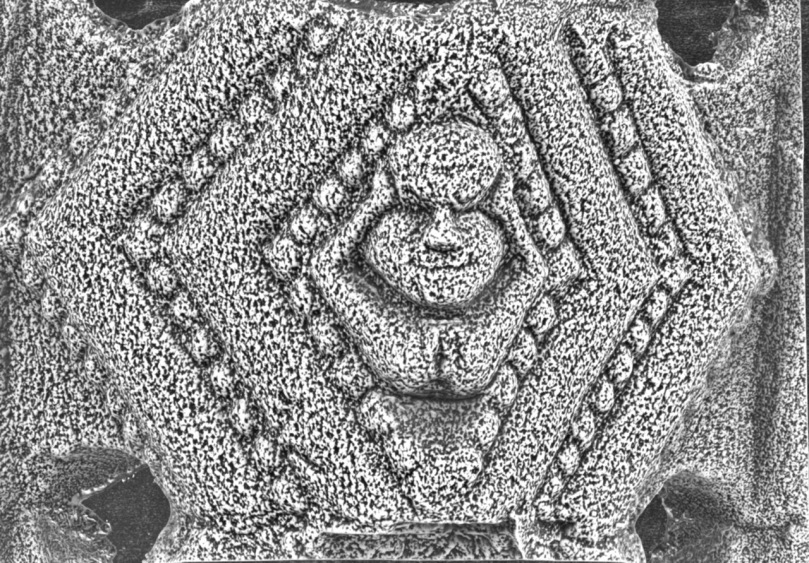 Does this help? This is just a screen capture of one of DH_Age’s 3D renderings – view it properly online here. This may be a very early sheela or simply one of the grotesque figures associated with romanesque carvings. The tiny figure is grinning and has its legs over its head, exposing the vulva and anus

There are multiple theories as to what a sheela represents and how they were ‘used’ on structures. Were they intended to attract and ward off the evil eye? To serve as a warning against lust? To invoke the sacred feminine through the powerful image of the vulva? The hag, or cailleach, is a vibrant motif in Irish mythology as a form taken on occasion by a goddess. Several sheelas are associate with saints, and believed to be representations of them. 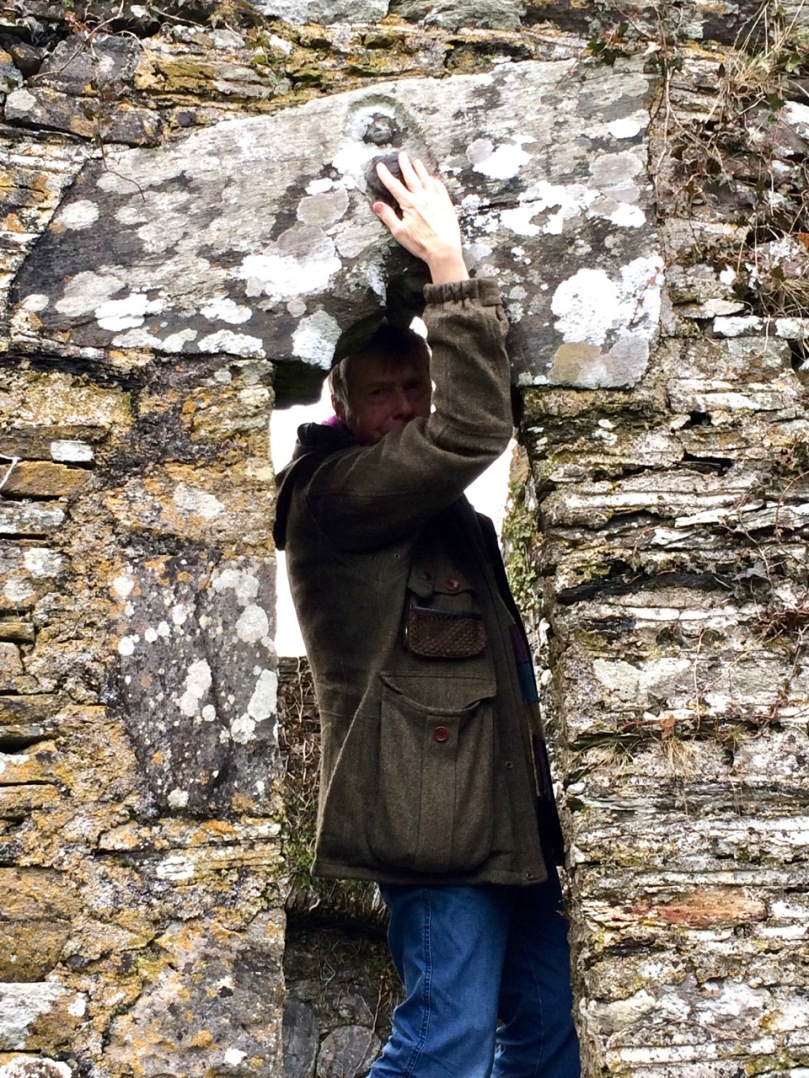 We have visited many sheelas (and one seán) and noted that it is always difficult to photograph them well. They are invariably out in the open and very worn. The details are difficult to discern and often obscured by lichen. Even where they are indoors, they show the signs of of exposure to the elements, so it is impossible to view them in what would have been their freshly-carved state. And of course they are deteriorating with every passing decade. 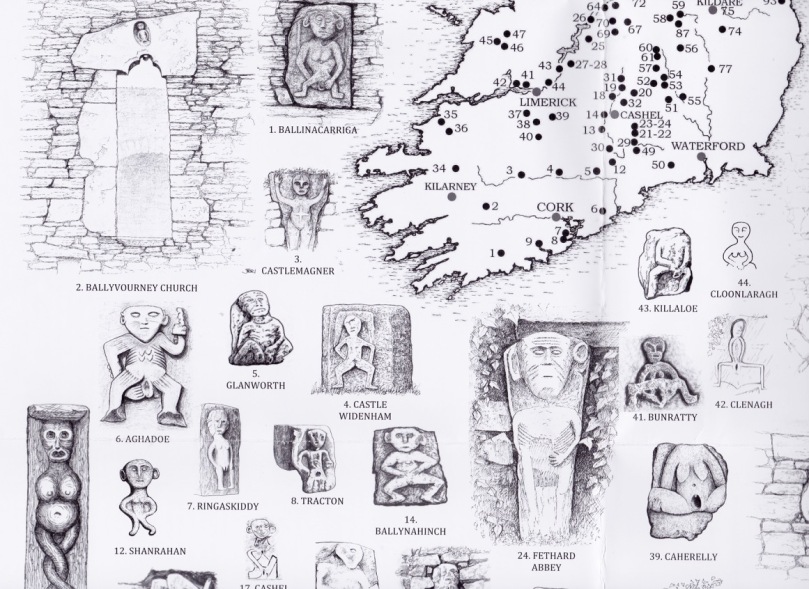 Fortunately, there’s this great project out there run by DH_Age, or Digital Heritage Age, to record all the sheela-na-gigs using the latest 3D imaging technology. Hats off to Gary Dempsey and Orla Power for undertaking this incredibly important initiative with the support of The Heritage Council. They are working away on visiting all the Sheelas in Ireland and already have a substantial body of images to view online. 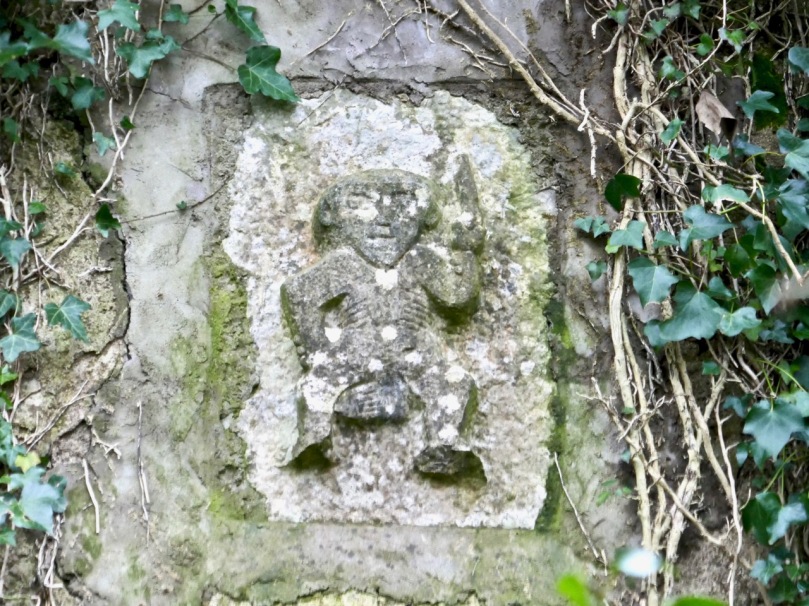 Take a look at their collection of Cork sheelas to see how a good 3D image can reveal the true nature of a carving. The Aghadoe (Co Cork) example is particularly striking to me, because we visited it recently and I found it quite hard to photograph. The 3D image shows the breasts, the ribs, how one arm goes behind the legs to display the vulva while the other holds something aloft, and the curious bumps on the wrists that defy interpretation. 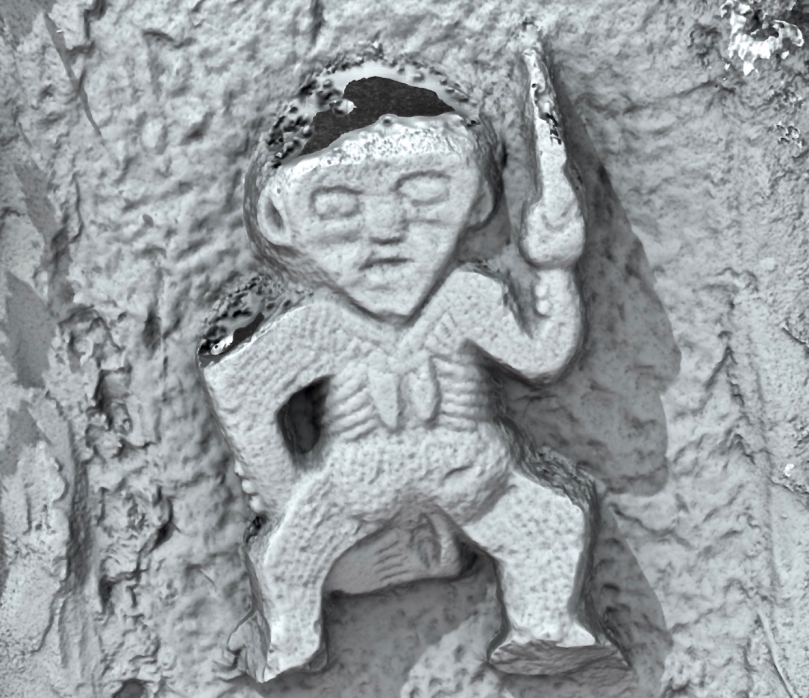 The DH_Age’s 3D rendering of the Aghadoe Sheela: the clarity of detail is impressive, but view it online for the full effect

The Aghadoe Sheela-na-Gig has a complicated history of being placed in different locations but it is currently on the side of a dovecote of indeterminate date and looking like at any moment it will be covered by the thick growth of ivy all around it. There was a tower house here at one point, and the sheela was reported as ‘probably from the castle’ and as ‘lying beside it.’ It’s a little tricky to track down now, so it’s a big thrill to find it and to see that, for the moment at least, it’s in the relatively protected position of being cemented into the dovecote wall. 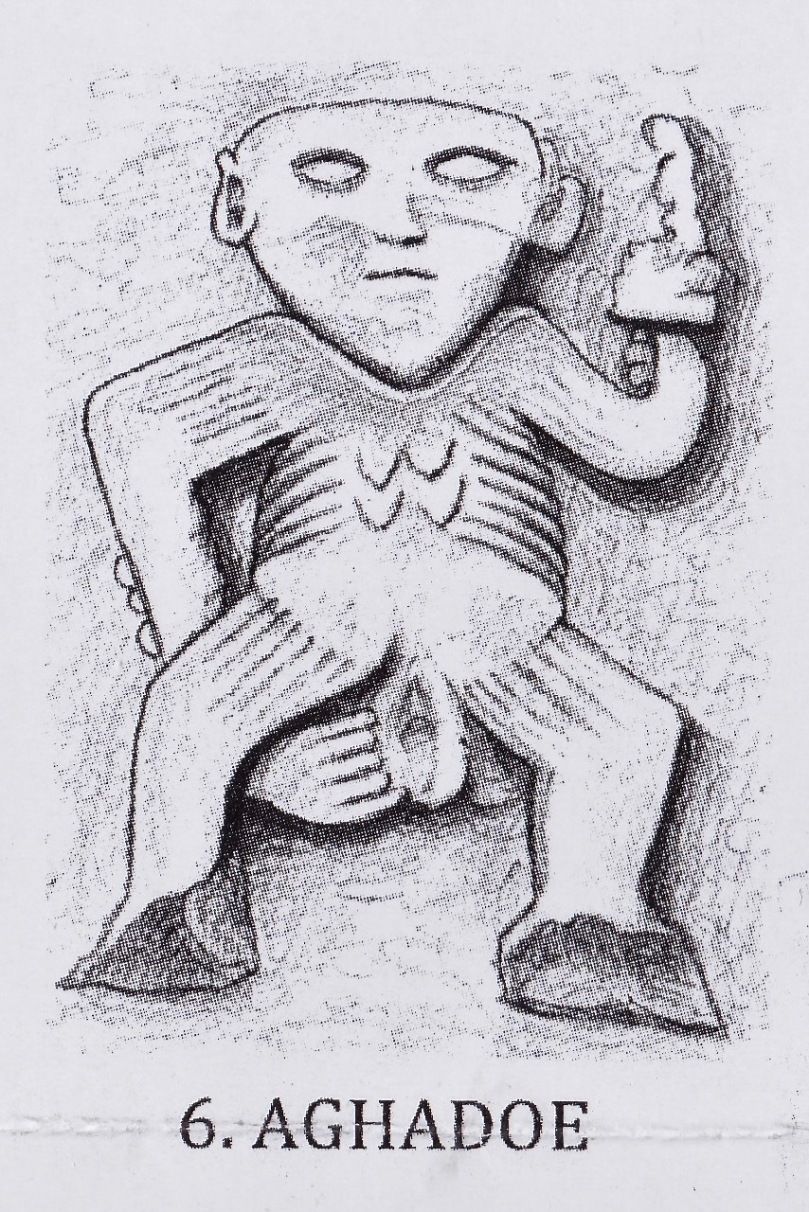 Our old friend Jack Roberts has written extensively about sheela-na-gigs and has published a marvellous resource – a one page fold-out map of the Sheela-na-Gigs of Ireland. You can order this from Jack’s site. His illustrations, as usual, are superb, and his artist’s eye managed to make out much of the detail that my camera couldn’t catch. 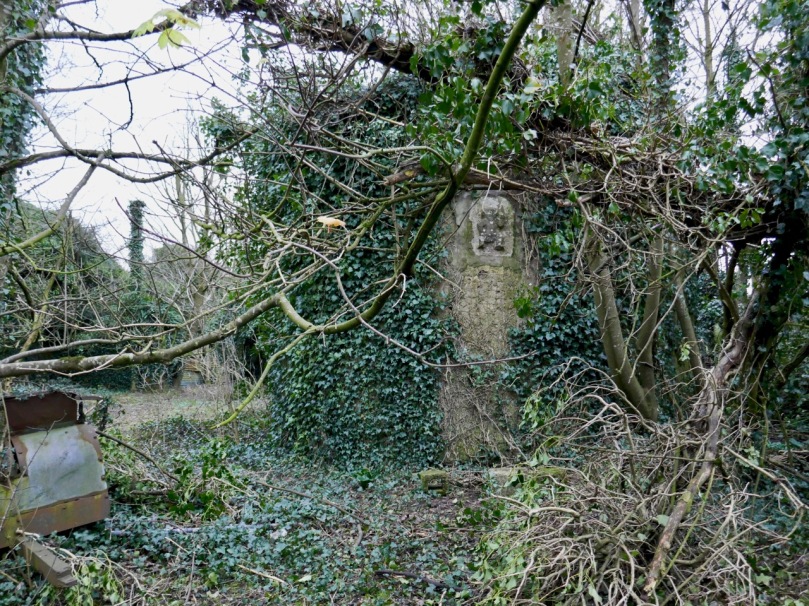 The Aghadoe Sheela is currently cemented on to a dovecote

I will come back to sheela-na-gigs in a future post but for now, you can check out these resources, for Ireland and for Britain, to learn more.