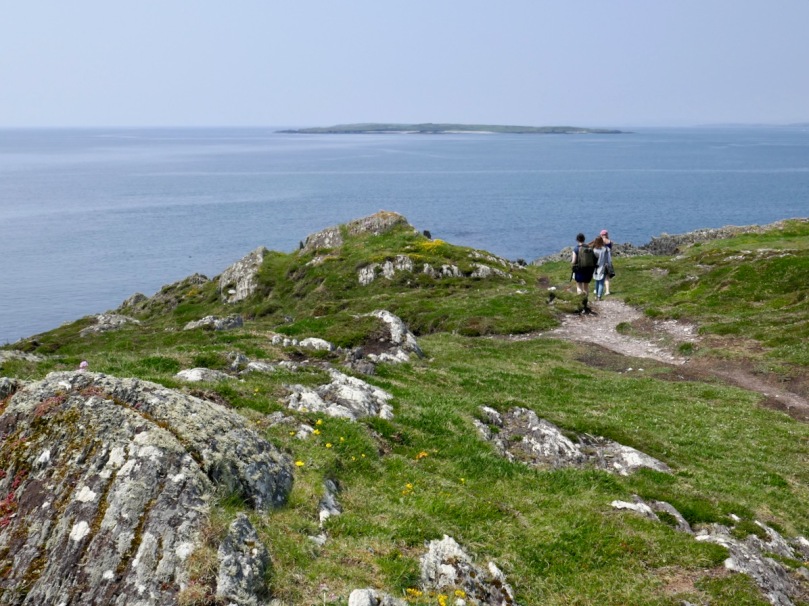 You know that term, Island Paradise? Well, this week I went there. It’s called Heir Island, and it’s one of the inhabited islands of Roaringwater Bay. It was the first of many visits, I hope, and it was taken in the good company of Trish Punch and two Islanders, Christine Thery and Sarah Mathews.

This is the view of Heir Island from our own home – the grouping of houses behind the sandy beach is called Paris!

Heir (sometimes rendered as Hare) is Inis Ui’Drisceoil in Irish, and indeed it was very much part of the O’Driscoll territory up to the 1600s. The population has dwindled, along with that of all the islands, until now there are only about 20 permanent residents. But it’s a popular destination in the summer, with an active sailing school, a renowned restaurant (the Island Cottage) and of course the Bread-Making School that Robert and I attended and enjoyed enormously. 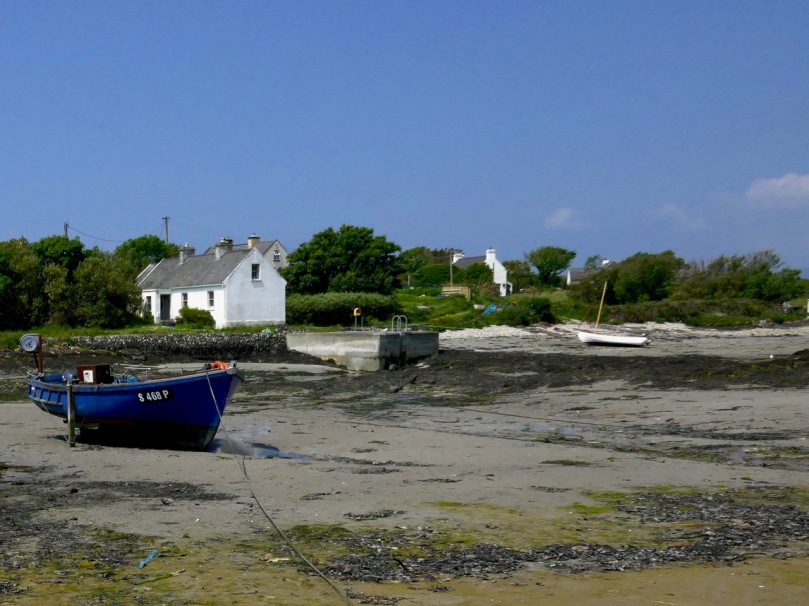 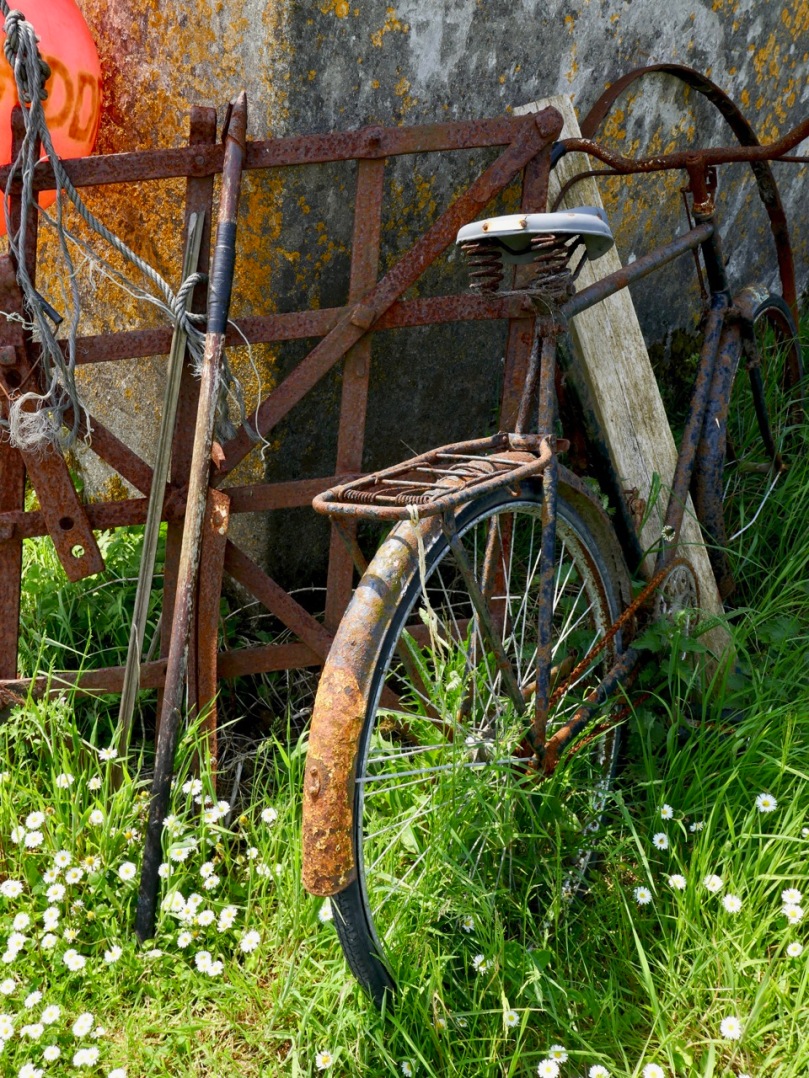 It’s got wonderful peaceful boreens, picturesque cottages, panoramic views over Roaringwater Bay and to the other islands, golden beaches – all this and it’s only a four minute ferry ride to the mainland. But shush – don’t tell anyone else or they’ll all want to come. 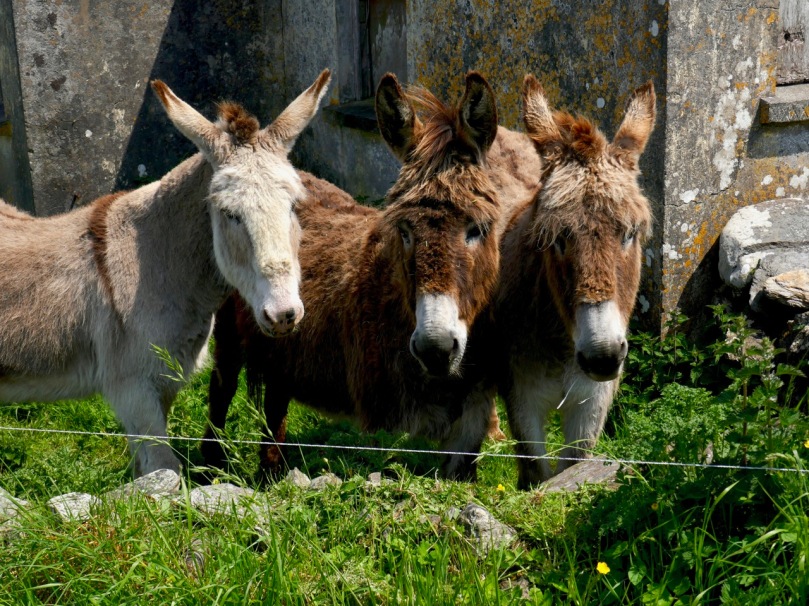 Trish is doing a long-term photographic project focusing on the islands of the Wild Atlantic Way and was keen to get back to Heir to capture the views. I had been following a Facebook Page called Heir Island Wildlife Project and had contacted Christine and Sarah, two of the admins on that page, to see if they would meet us when we came and tell us a little about their project. They did better than that, walking the length of the Island with us, and answering all our questions. (Not to mention the coffee and those Portuguese buns!)

I had boned up a little on the island plants, with the help of The Wild Plants of Sherkin, Cape Clear and adjacent Islands of West Cork by John Akeroyd et al, a publication of the Sherkin Island Marine Station that we had visited way back. The book outlines the habitats and growing conditions of the islands, and enumerates the “astonishing” richness of plant species that are to be found on them. Heir is second only to Sherkin in the number of Flowers and ferns to be found, several of which are nationally rare.

The islands ‘specialise’ in heathland species, due to the dominance of open ground, the lack of trees and the broken rocky nature of the terrain. As Akeroyd explains, Thin soils dry out during the summer, thus preventing encroachment by more vigorous species and allowing the plants themselves to die down and the seeds to ripen. Most of this group of plants are annuals more characteristic of southern Europe and the Mediterranean region. . .

And indeed what I found was an astonishing variety of wildflowers. When I got home I counted that I had taken photographs of 45 different plants! But that was only part of the wildflowers we saw, since I didn’t photograph everything we came across. Several were new to me, including the Amphibious Bistort and the Pond Water-crowfoot that had arrived unbidden in Sarah’s newly-dug pond.

Butterflies, hover flies and bumble bees seemed to be everywhere we looked. The orange-tip butterfly (the one that loves the Cuckooflower) wouldn’t stay still enough for a snap, but a Common Blue Butterfly with its iridescent wings, and a Cinnabar moth with bold stripes both cooperated.

At the West end of the Island rugged cliffs provide a perfect breeding ground for European Shags. These birds have been amber-listed in Ireland because breeding populations are very localised. Therefore, it’s important that they have found a suitable nesting site on Heir and it’s wonderful to see that this small colony seems to be successfully hatching their young. Looking quite like a cormorant and similar in size, up close they have a striking green gloss to their feathers.

The headland from which we observed the shags provided a carpet of spring heath on which to loll about and admire the views across the Cape Clear and the Mainland. My eyes were immediately drawn down, however, to the ground beneath me. Orchids, Wild Thyme, Thrift, Lousewort, and a beautiful rose-coloured Kidney Vetch provided swaths of pink and purple, while Milkwort and Dog-violet yielded hint of blue and Scurvygrass (Common, I think) rounded it all out with a mat of white flowers.

I didn’t find (or didn’t recognise) some of the very rare plants that grow on these islands, like Wormwood, Deptford Pinks and Spotted Rockrose. Obviously another expedition is called for! 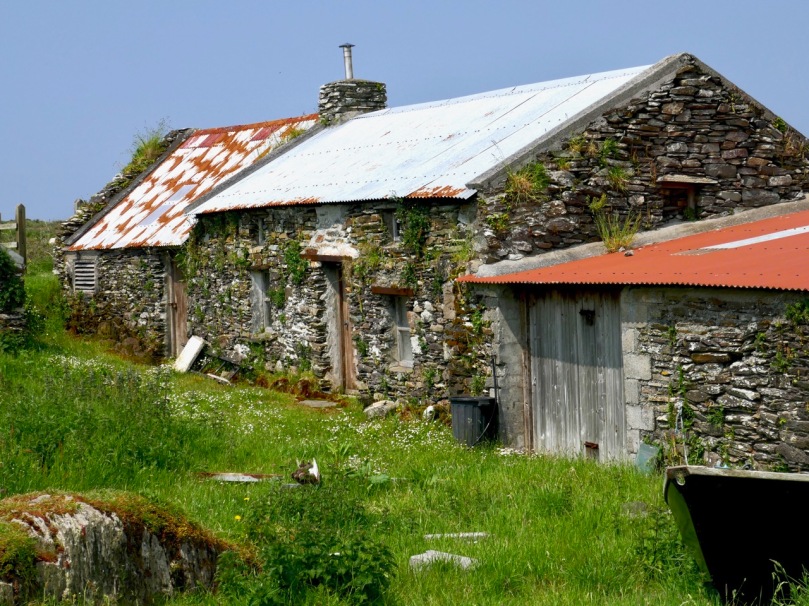 I worry all the time about habitat loss in West Cork. The sound of the rock breaker is a constant in our lives, carving out new fields where there was heath and hedge, and thereby reducing food and shelter for our pollinators and small mammals. I feel despair when I arrive at my favourite place to see a certain set of wildflowers, only to find that someone has been in there with Roundup and it’s now a brown wasteland. Places like Heir Island have a unique opportunity, perhaps even a responsibility, to stay as pristine as possible, to remain an Island Paradise as long as possible for all our sakes. Fortunately, lots of the local residents think so too and that make me hopeful.

Thank you, Sarah and Christine for a wonderful day, and Trish for your excellent company. Let’s do it again soon!