St Brendan was a favourite subject for Harry Clarke. Four of his windows depict the saint: a prizewinning student piece from 1911; his Honan Chapel commission of 1916; the Ballinrobe windows from 1924-25 (pictured above); and the windows designed for the Rathfarnham Jesuit Retreat in 1928 and subsequently relocated to Tullamore (pictured below).

The Tullamore Brendan (above) is recognisably based on that from Ballinrobe, but in this window a youthful Brendan, as described by Paul Donnelly, ‘engages the viewer directly with a penetrating look’

Harry researched his subjects extensively and ensured that anyone working on his windows did too. Paul Donnelly, in his fascinating essay Legacy and Identity: Harry Clarke, William Dowling and the Harry Clarke Studios (in Harry Clarke and Artistic Visions of the New Irish State) tells how he sent his apprentice, William Dowling, off to the National Library to read all that was available on his subject when he was working on the Rathfarnham window (above and below).

Nicola Gordon Bowe, in the Life and Work of Harry Clarke, felt that Harry was influenced by Matthew Arnold’s poem, St Brandon, when he set about designing his student piece, now in the Crawford Art Gallery. Based on the Medieval best-seller (there are over 100 versions still extant and many translations) Navigatio Sancti Brendani Abbatis, Arnold’s poem tells of an incident on the voyage in which the Saint meets with Judas, tied to an iceberg in the ocean. There are several slightly different accounts of this part of the voyage, but Arnold’s poem is compelling, and beautifully told.

From the Ballinrobe window, a detail showing what Brendan was seeking – the Land of Promise

Both in his poetry and criticism, Arnold explored issues of morality versus religion, and themes of alienation and redemption. Clarke was constrained to work on religious subjects since most of his stained glass commissions came from churches, but revelled in the chance to introduce details from mythology and ancient hagiographies (such as O’Hanlons Lives of the Irish Saints which he consulted exhaustively) and to use those details as a springboard for his own imagination.

Also from the Ballinrobe window, the bottom panel shows Brendan praying  at the bow of the boat and an angel appearing

We can see the progression of his art, and his growing interest in the macabre, in the two depictions of Judas. Both are emotive and powerful, but in the first, from 1911, Judas is shown as a fully human, tortured man. In the Honan window, from 1916, he has turned into a monster with scales, feathers, fur and claws. One constant is that Brendan’s companions look on in shock and horror in both pieces, while the saint remains unmoved, gazing thoughtfully and perhaps compassionately on the scene. 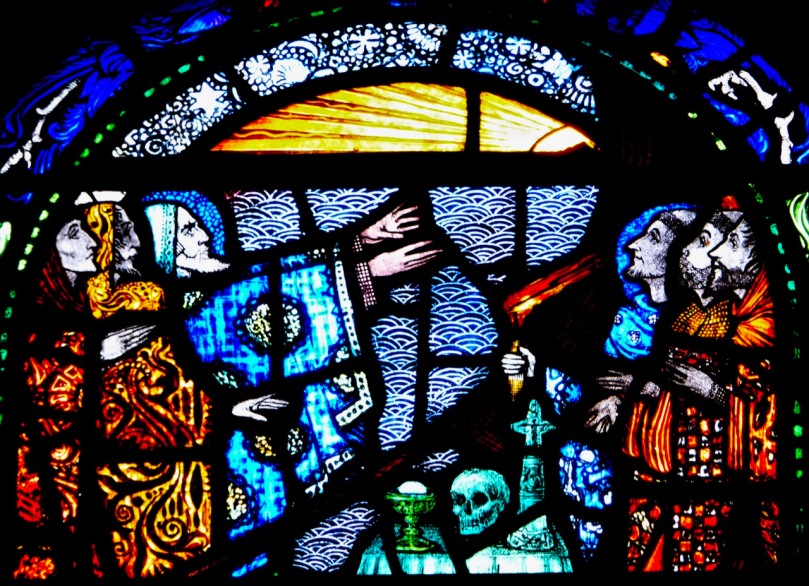 From the Honan window, according to Gordon Bowe: ‘The upper panel which perhaps represents Brendan’s vision of Paradise, is spanned by a golden hemisphere and depicts the saint at sea in his coracle, preaching to his companions as they approach the skull-ridden coastline of America in their search for the Islands of the Blessed’

Harry went on to design two more Brendan windows, but chose different details for them. In fact, he wrote to Monsignor D’Alton at Ballinrobe, ‘The meeting with Judas I have done too often to do again with enthusiasm.’  Arnold’s poem was first published in 1860. He died in 1888 and Harry was born in 1889, so their lives did not overlap. But Harry was very well read and Arnold, at the turn of the century, was still considered one of the major poets of the Victorian era. I think you will find that the poem and the windows are a successful collaboration between two iconic figures of art and literature. I give the poem now in its entirety, illustrated by Harry Clarke. [The first image is from a panel in Tullamore, originally part of the St Brendan window but separated from it when the windows were relocated. The second and third image are from the 1911 student piece; the next three from the Honan Chapel 1916 window.]

The brotherhood of saints are glad.

He greets them once, he sails again;

He heard, across the howling seas,

He saw, on spray-swept Hebrides,

And now no bells, no convents more!

The hurtling Polar lights are near’d,

The sea without a human shore. 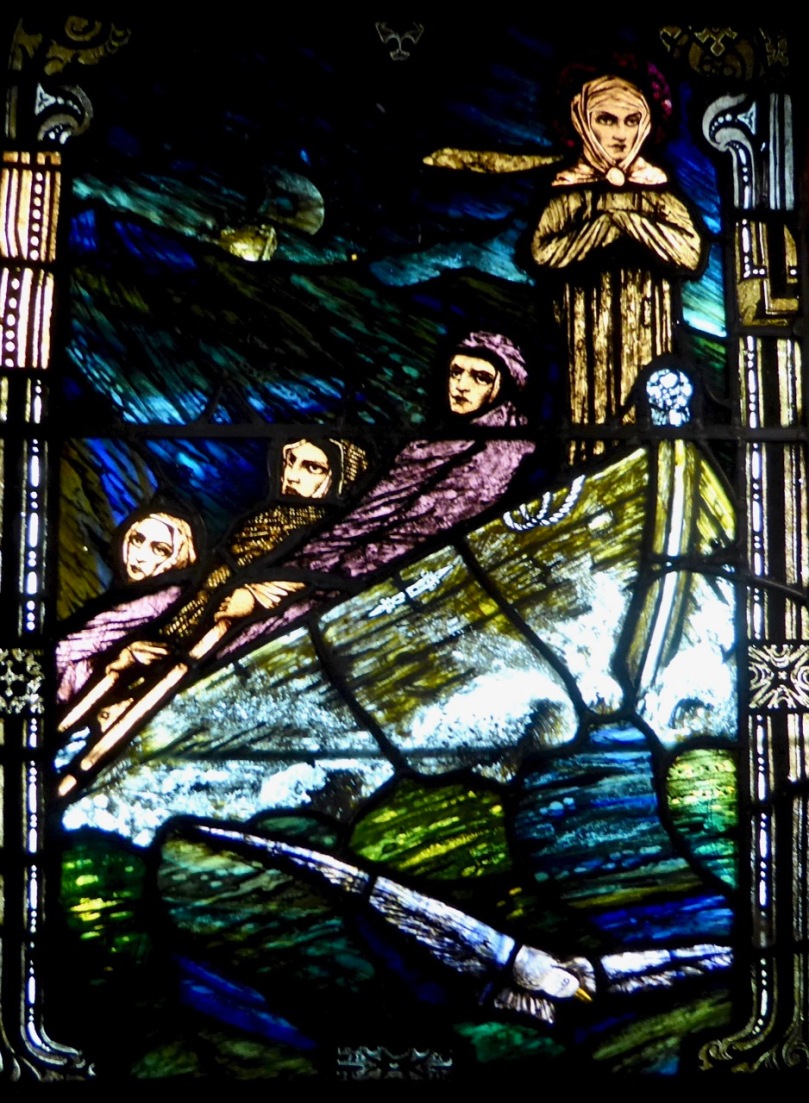 At last—(it was the Christmas night;

Stars shone after a day of storm)—

He sees float past an iceberg white,

And on it—Christ!—a living form.

That furtive mien, that scowling eye,

Of hair that red and tufted fell—

It is—Oh, where shall Brandan fly?—

The traitor Judas, out of hell!

The moon was bright, the iceberg near.

By high permission I am here.

‘One moment wait, thou holy man

On earth my crime, my death, they knew;

My name is under all men’s ban—

Ah, tell them of my respite too! 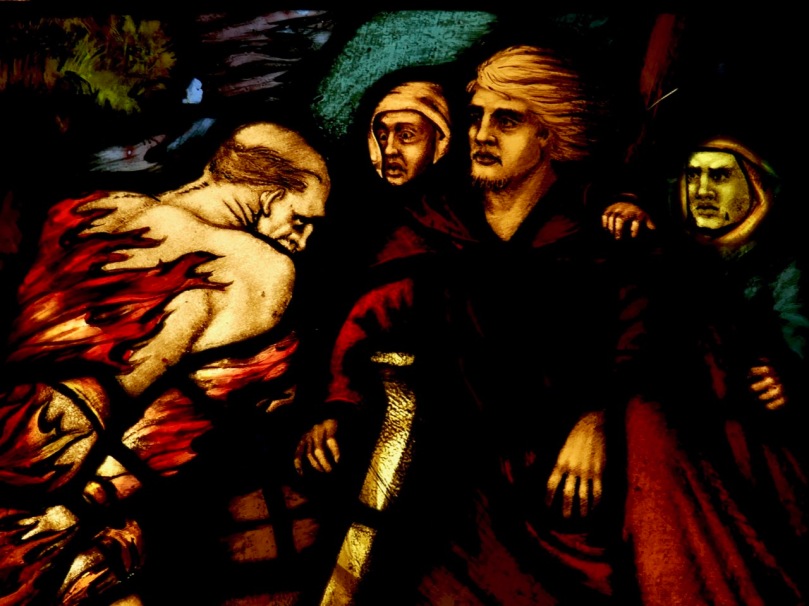 ‘Tell them, one blessed Christmas-night—

(It was the first after I came,

To rue my guilt in endless flame)—

‘I felt, as I in torment lay

An angel touch my arm, and say:

The Leper recollect, said he,

Who ask’d the passers-by for aid,

In Joppa, and thy charity.

‘Then I remember’d how I went,

In Joppa, through the public street,

One morn when the sirocco spent

Its storms of dust with burning heat;

‘And in the street a leper sate,

Sand raked his sores from heel to pate,

The hot wind fever’d him five-fold. 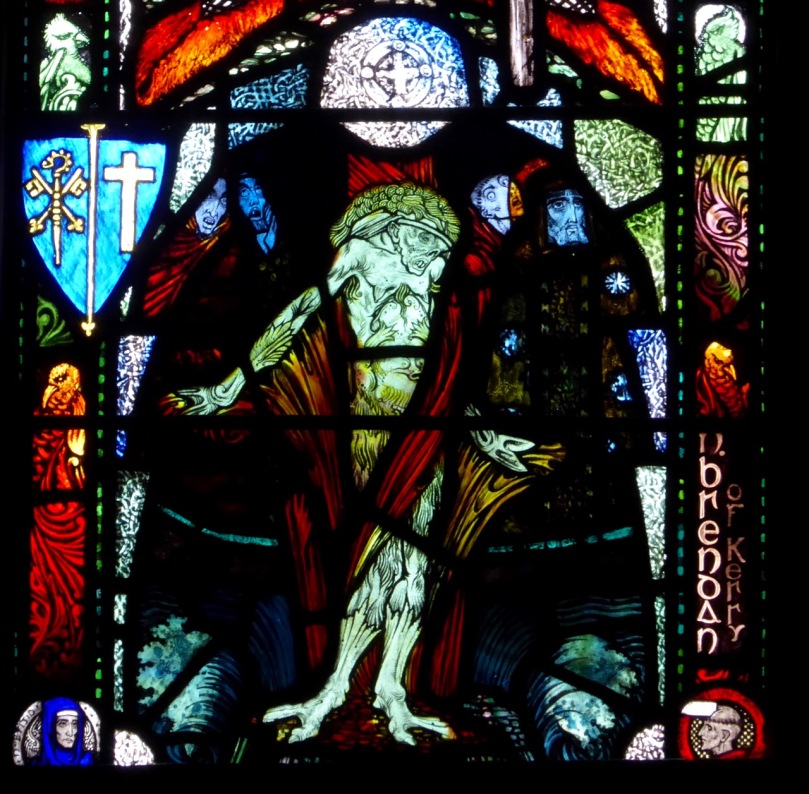 ‘He gazed upon me as I pass’d

To the poor wretch my cloak I cast,

Saw him look eased, and hurried by.

What blessing must full goodness shower,

Did that chance act of good, that one!

Then went my way to kill and lie—

Forgot my good as soon as done.

‘That germ of kindness, in the womb

Of mercy caught, did not expire;

And friends me in the pit of fire.

‘Once every year, when carols wake,

On earth, the Christmas-night’s repose,

Arising from the sinner’s lake,

I journey to these healing snows.

‘I stanch with ice my burning breast,

With silence balm my whirling brain.

Oh, Brandan! to this hour of rest

That Joppan leper’s ease was pain.’—

He bow’d his head, he breathed a prayer—

Then look’d, and lo, the frosty skies!

The iceberg, and no Judas there!