Out of the blue, we have a day of brilliant sunshine, with no rain in the forecast (although the forecast has a tendency to change hourly) so we decide to take advantage of the day and get out for a good walk.

We have bought West Cork Walks by Damien Enright, the Schull and Ballydehob edition, and decide on a walk that takes Rossbrin Cove, only a couple of miles away, as its starting point. The book is well laid out, almost step-by-step. This proves to be a little distracting in places, with constant references to spring-blooming flowers and wildlife seen on one evening in April; however it pays off in the level of detail offered, without which we would undoubtedly have missed small features and background facts which enhanced our enjoyment of the walk.

Rossbrin is a sheltered harbour, greatly used in the past by the islanders from Cape Clear, Horse Island, Hare Island, Castle Island and others that we can see once we reach the higher points. The most dominant feature of the cove is the O’Mahoney castle, an impossibly romantic tower house that rises from the western side of the inlet and that was, in the sixteenth century, the centre of a learned court led by Finghin O’Mahoney, the ‘scholar prince of Rossbrin’. Now, the cove is lined with houses, all of which have great views of the harbour, but many of which appear to be uninhabited. This is one of the legacies of the Celtic Tiger years, when the local economy was fuelled by a building boom of ‘holiday homes’ and Ballydehob was a thriving town with bookstores, galleries and prize-winning eateries.

Leaving the cove behind we climb the steep hill behind the houses and are rewarded by expansive views across to the Baltimore Beacon and Sherkin Island. A mile or so along a pleasant country lane we come to Stouke Burial Ground. Among the gravestones, many for islanders, we find a bullaun stone, with two jars full of coins on top. A bullaun is a rock with a bowl-like depression in which water collects and that water is supposed to have curative powers. Robert dipped his finger in the Clonmacnoise bullaun and his wart was gone in a couple of weeks, although I tried it too and my wart still adorns my thumb. I give it another go, and we both add coins to the jars, a little in awe that in this remote place jars of money can remain untouched. Folk customs like this probably pre-date Christianity. A defining characteristic of Irish Christianity was that it blended the old pagan beliefs with the new religion in a seamless mosaic of customs and mythology. St. Brigid was probably a pre-Christian goddess; the old celebrations based on the solar calendar became saints’ days; the bullaun made an easy transition from the magical to the miraculous. 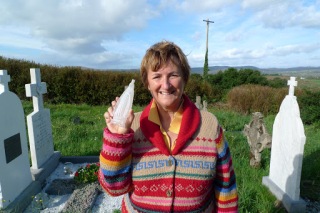 Carrying on, we come across two roadside stands and once again marvel that money can remain untouched as we deposit our coins into jars for honey and for apple chutney. We start on the downhill path back to the cove with the magnificent vista of Roaringwater Bay and its islands spread before us. Back at the cove we have time to sit on an upturned boat in the sun, munching on an apple and cheese, adding yet another waterfowl (a tufted duck) to the list of those we have seen since we arrived in West Cork, and contemplating the good fortune that has allowed us to fetch up in this extraordinary place.