This post was first published in October 2013. Since then I have found more material, so have decided to update it.

The non-fiction book, White Goats and Black Bees by Donald Grant is set on the Sheep’s Head. Donald and Mary Grant, a couple of journalists based in New York, impulsively decided to jump off the career treadmill and become farmers in Ireland in the 1960’s. They bought a small acreage on the Sheep’s Head, where they raised goats and ducks, cultivated an enormous vegetable garden, and by degrees and sheer hard work turned themselves into ‘peasants’.

This out-of-print book was drawn to my attention by my friend, Aideen, whose father, while in New York, had encouraged the Grants to consider West Cork. Aideen visited the Grants as a young woman and still has memories of their gorse wine.

Dooneen, on the Sheep’s Head – this was the view the Grants looked out on. It could be fierce and desolate in the winter

As a Back to the Land narrative, this is a classic. Earnest urban professionals consulting Department of Agriculture pamphlets, conducting slug patrols, keenly observing the social structure of their goat herd and duck flock, battling the wild Atlantic storms, making cheese and smoking hams: this is the kind of thing that sent thousands of idealistic young people into communes all over the world, or in the case of Ireland, into the hills behind Ballydehob. The need to be accepted by the locals, a thread that appears in so many Year in Provence-type books, is coupled with the outsider’s puzzlement at the impenetrability of some aspects of local behaviour.

Grant is not a gifted writer when it comes to scenery: …Trees wore their autumn colours. Streams tumbled down rocks, sparkling… Nevertheless he does slowly build up a picture of a man coming to grips with his place in the natural world and his relationship with animals and the elements. Perhaps the strongest sections of the book are those in which he chronicles the hard work and resourcefulness that it takes to sustain life on a smallholding, the setbacks and difficulties he and Mary encounter, and the support of the neighbours and community without which it would be impossible.

Donald and Mary, although not Catholic, attended the Star of the Sea church in Kilcrohane. This window from that church depicts the struggle against the elements that was such a part of life on the Sheep’s Head

The story of Donald and Mary took a strange turn for me when I decided to Google around a bit, digging for more information about them. Astonishingly, Mary was convicted in Israel in 1956 of spying for Syria! She spent a year in an Israeli prison, eventually applying for a pardon. According to one account, she had fallen for a Syrian diplomat who persuaded her to take photographs in Israel for the Syrians. She was so unsophisticated a spy that she was captured almost right away.

She claimed to have been married to the Syrian: one newspaper account referred to her as Mrs. Caleb Kayali, the former Mary Frances Hagan of Huntington, W. Va. However, Kayali denied that they were married. The trial took place in secret, although the US authorities were kept apprised of the situation. Mary was eventually released when she had served much of her sentence. Once free, she denied that she had been spying, and described her prison term as “boring.”

Donald and Mary on their farm. Note the photographer, Mark Fiennes, who was also living on the Sheep’s Head around this time

She and Donald met when they shared a desk at the United Nations, where they were both correspondents: he for the St. Louis Post-Dispatcher and she for Look Magazine. Little did the people of Doneen know of the chequered history of the American woman who introduced goat’s cheese to their far-flung parish. The story which starts White Goats and Black Bees – the one where Donald and Mary take a sudden notion to move to Ireland and farm – may not have happened quite as related. According to one account, Donald had been “given early retirement” when the Jewish community complained of and investigated what they saw as his “extremely anti-Israel” coverage, and declared that his marriage to a former convicted spy put him in a conflict of interest situation. 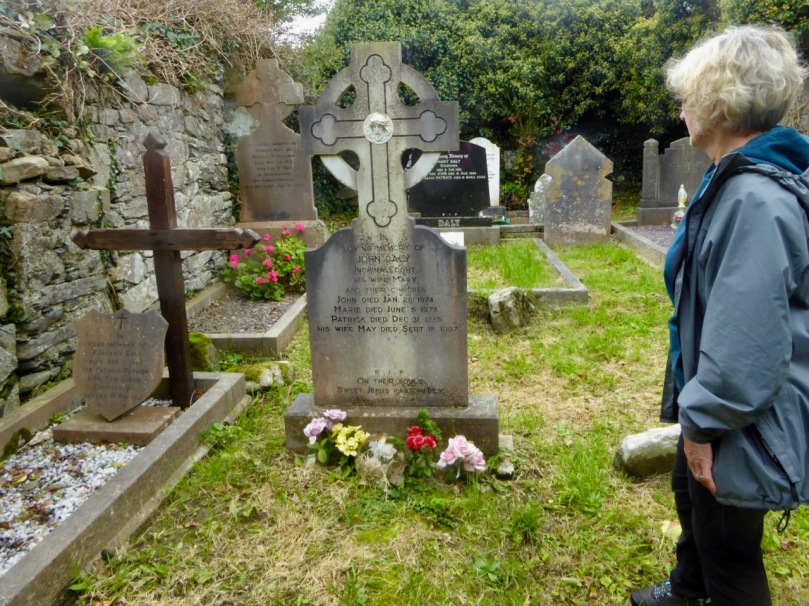 The old graveyard in Kilcrohane, centred on a ruined medieval church, is a beautiful and peaceful place

Whatever the truth behind how they got there, Donald and Mary continued to live happily on the Sheep’s Head and eventually in Bantry for the rest of their lives. While Donald died in 1983, Mary lived until 2012. Both are buried in their beloved Kilcrohane.