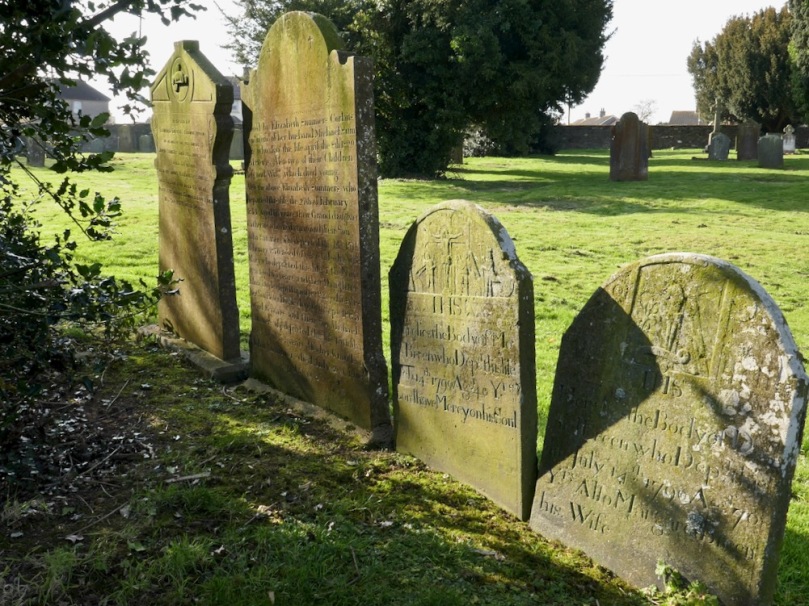 Ferns, in Co Wexford, is an historic town that boasts many fine heritage attractions including an Anglo-Norman Castle, an Augustinian Abbey and other medieval ruins, high crosses and associations with the McMurroughs and the Marshalls. Not least among its delights is the Cathedral graveyard, which has one of the best collections of eighteenth century headstones I have ever seen.

Look at the headstone above and the one below. The elements used in the carving are identical except that the central image in the first is a crucifixion scene and in the second it’s an IHS in a sunburst. Note the J Byrne signature under the carving to the left above and the Pat Byrne signature below. How were J and Pat related? Does the difference demonstrate anything other than the preference of the person who commissioned the headstone? I’m tempted to see the gradual replacement of the crucifixion image with slightly less ‘popish’ symbols, but I’m probably overthinking this

In our post Memento Mori, I introduced you to Irish headstones and the practice, which really only dates back to the 18th century, of routinely placing headstones on graves. Even then, only those who had the means to pay for a carved headstone were memorialised in this way – most still lay in graves with simple field stones at their head (and sometimes feet).

In Headstones or Folk Carvings? we visited Kilcoole graveyard to Co Wicklow, home to many fine headstones including one by Dennis Cullen, an acknowledged master carver. In Ferns we found many of the headstones had been carved by J Byrne (or J: Byrne, as he styled it) and although his technique does not quite have the refinement of Dennis Cullen, his carvings have a charm and energy that make them recognisable even where the headstone is not signed. 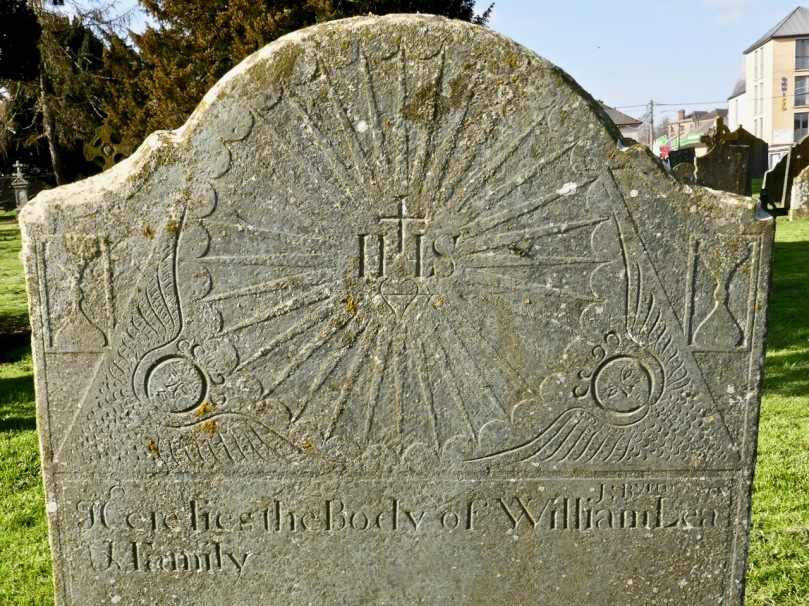 See the ‘J: Byrne’ signature just below the carvings to the right. There is no date on this headstone for William Lea (or Leacey? See the tiny superscript above the ‘Lea’). The detail on the angels is very fine and I love the little arrow in the centre of the sunburst, just below the IHS

The most common image is, of course, the IHS. Known as a Christogram, IHS is shorthand for the name of Jesus. It is often surrounded by a sunburst, or surmounted by a cross. Interestingly, the earlier and later headstones are more likely to feature the IHS as their main element.

Two early headstone, from 1758 and 1773, starting with Here Lieth. Mogue is a local name, for Saint Mogue of Ferns, whose well lies across the road. Note that the final Y of Mercy doesn’t quite fit on the line so a superscript is used

Many of the most interesting headstones date from the 1790s and where they have a signature it is that of J Byrne. There must have been a vogue for crucifixion scenes at the time, because they appear here and there throughout the graveyard and date to this period.

The J: Byrne signature is almost obscured by lichen. This is a typical J Byrne carving, with a crucifixion scene: Jesus on the cross, Mary and possibly John on either side, all three with halos. Sun and moon round out the carving

Jesus is on the cross at the centre of the tableau, with Mary on one side and John on the other. Occasionally other figures appear – Roman soldiers, a man on horseback, angels.

The dress, as is common with carvings of this period, reflects eighteenth century styles – observe the soldier in the frock coat in the Moses Breen scene (above) and the angel in the seamed jacket on John Kehoe’s stone (below).

There are a couple of headstone with horses in the crucifixion scene, but it’s unusual

The most frequent other symbols are the sun and moon, often with faces. The sun/moon symbols can be the main elements or can be wedged into available spaces on either side of crucifixion scenes.

The lettering styles vary, although generally they become tidier over time. Occasionally, the lines incised to keep the carver straight can be discerned. Words that don’t fit are either carried over, or a tiny superscript finishes them so they can stay on the same line. 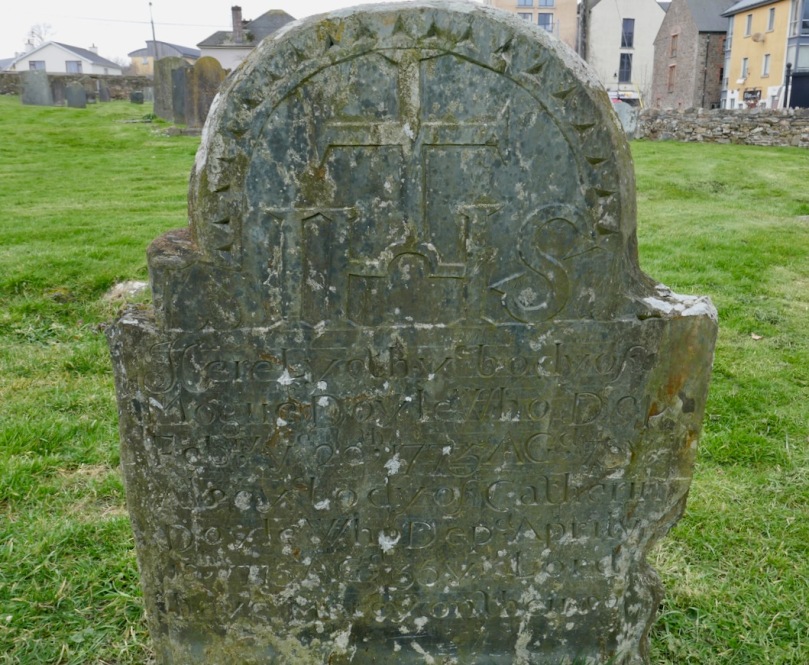 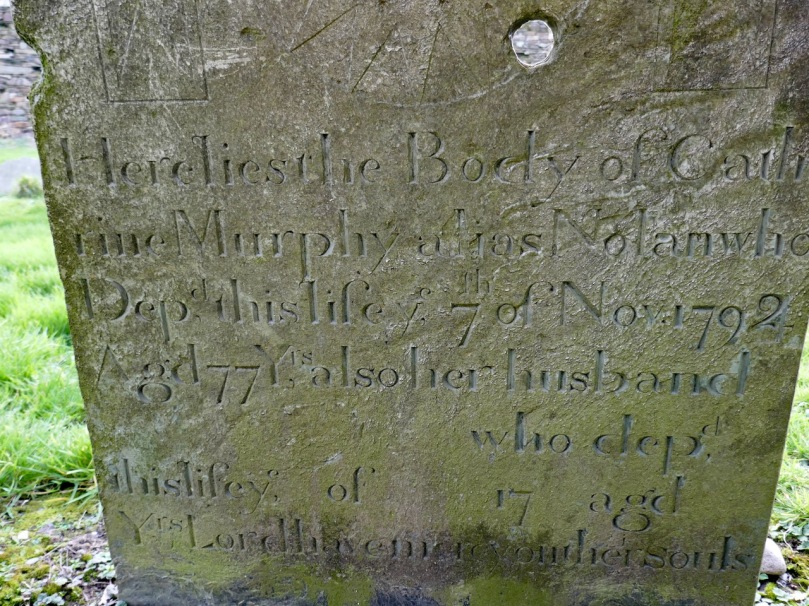 This 1792 headstone is for Catherine Murphy. But it is also for her husband. However, none of the husband’s details appear. I can understand that he would have been added to the headstone at the time of her death, for efficiency perhaps, with his dates to be added later – but the fact that his name is missing gives rise to all kinds of speculation!

One mysterious element of several of the gravestones in Ferns is that at some point in the past someone has drilled holes in some of the headstones (see the two examples, below). If anyone can tell us the significance of this, we would be grateful to know it. 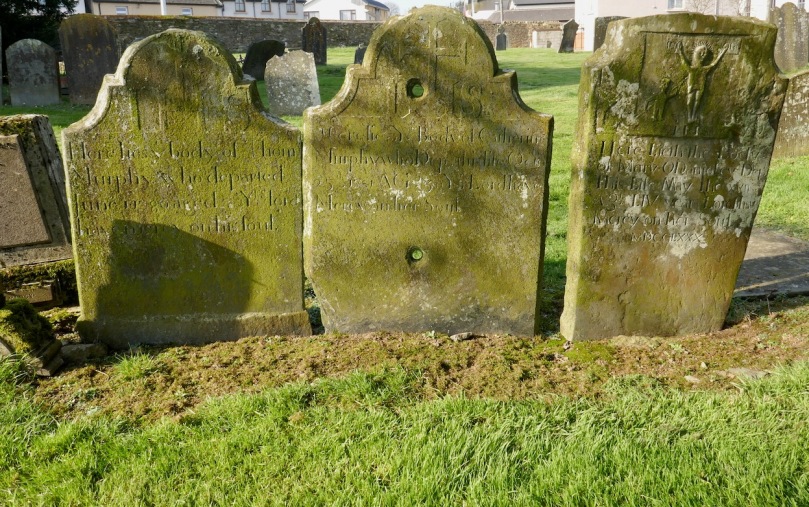 We highly recommend a visit to Ferns. Give yourself a day to take in all that’s there, but don’t forget to have a good wander around the old graveyard. Morning is best, as the light goes behind the headstones in the afternoon. 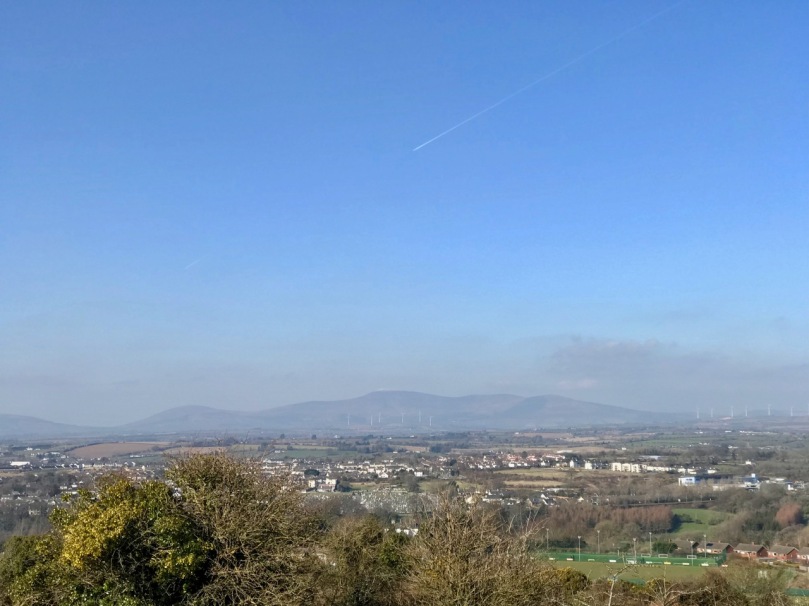 Recent travels took us to County Wexford, and we immediately immersed ourselves in the locality. For years I have played the tune usually known as Boolavogue, without fully understanding the significance of the piece – and its place – in Irish history. Firstly, here’s a masterful rendering of this most heartrending of airs  by Davy Spillane and Aly Bain (from the Transatlantic Sessions) – enjoy the beauty:

That’s the instrumental but, according to the history books, the tune was originally called Eochaill (Youghal Harbour), used as the melody for a song written in 1898 by Patrick Joseph McCall to commemorate the centenary of the Irish Rebellion: the song was known as Fr Murphy of the County Wexford, and became ‘Boolavogue’ in more recent times. Here is Eochaill beautifully played by Paul Davies who I met on my first visit to Ireland back in the 1970s: he took me on a musical trail around County Clare where I met and heard some of the then ‘greats’ of Irish Traditional Music, including concertina player Paddy Murphy. Sadly, both Paddy and Paul have passed away now, but it’s good to keep their memories alive.

It may not be immediately obvious that Eochaill and what we now know as Boolavogue are the same melody, but comparison of the tunes is a good exercise in the study of evolution in musical traditions. What’s more important to our subject is the words of the song, and the reasons for the writing of it.

At Boolavogue as the sun was setting
O’er the bright May meadows of Shelmalier
A rebel hand set the heather blazing
and brought the neighbours from far and near
Then Father Murphy from old Kilcormack
Spurred up the rock with a warning cry:
“Arm! Arm!” he cried, “For I’ve come to lead you
for Ireland’s freedom we’ll fight or die!” 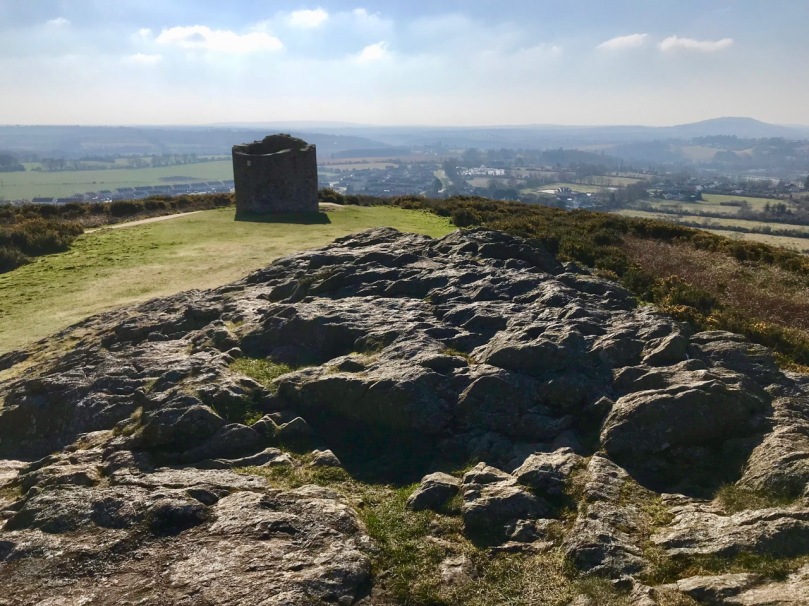 The header picture is a view from the top of Vinegar Hill, just outside the town of Enniscorthy, Co Wexford. Above is a view of the summit of the hill: it’s peaceful in the wintry sunlight. In 1798, however, it was a scene of carnage, as the United Irishmen, led by Father John Murphy, gathered to meet the British forces. George Cruikshank, the British caricaturist, produced illustrations for a history of the Irish Rebellion written by William Maxwell in 1845: he was not kind to the Irish cause but his drawings are probably accurate in their depiction of mayhem, slaughter and atrocities which were reportedly committed by both sides.

Cruikshank’s first drawing shows the Irish encampment on the summit of Vinegar Hill: women and children are evident. The windmill, which became the rebel command centre, dates from the 1600s and can still be seen on the hill today (shown in the photograph above). Disused probably since the time of the Rebellion, it fell into serious disrepair in the 1960s and a notice was affixed to it:

“Vinegar Hill, scene of glorious battle in 1798 between Insurgents and British Crown Forces. Carefully maintained by British Government from 1803 to 1922. Abandoned by the Irish Office of Public Works when freedom obtained. Only historic monument in the care of Irish Government in Enniscorthy area. Thank God for it.”

In our travels we chanced upon the ruins of another old windmill not too far away from Enniscorthy – in Tagoat. Today it’s in poor shape (but surely worthy of conservation) – we were unable to get close to it, but Finola managed to take this view:

Cruikshank’s imagining of the Battle of Vinegar Hill (above) could be a fair depiction. The engagement took place on Midsummer’s Day in 1798 and saw a rebel army of up to 20,000 – mainly armed with pikes – pitched against military forces of 13,000. Further military forces attacked nearby Enniscorthy.

Look out for hirelings, King George of England
Search every kingdom where breathes a slave
For Father Murphy of County Wexford
Sweeps o’er the land like a mighty wave 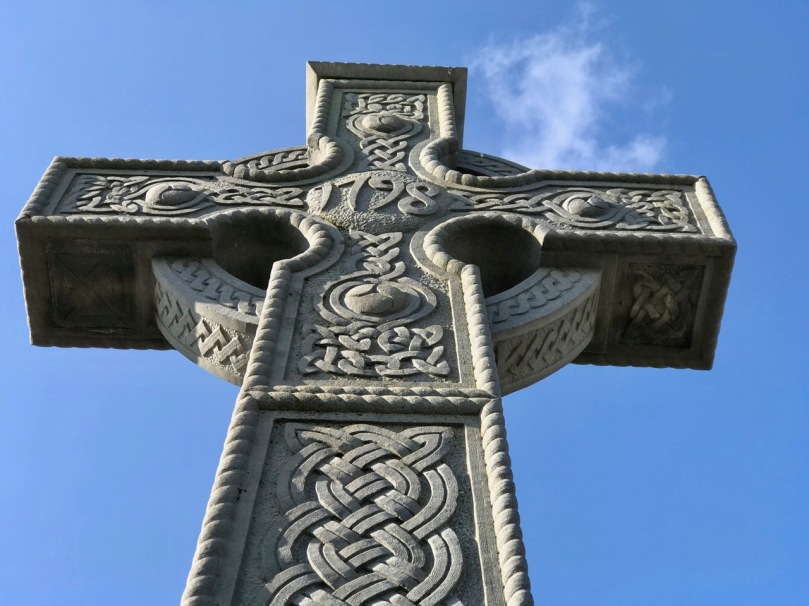 Father Murphy is remembered everywhere in Wexford. He has a fine memorial in Ferns (above), and a centre dedicated to him at his former home near Boolavogue. No lives were spared by the British at Vinegar Hill; rebels who escaped marched to the midlands but dissipated after failing to garner enough support to continue the uprising. Father Murphy and a companion were captured but not recognised. Even when mercilessly tortured neither man revealed their identity. Both were hanged in the market square in Tullow. The yeomen cut off Father Murphy’s head, put it on display on a spike and burned his body in a barrel of pitch.

At Vinegar Hill, O’er the pleasant Slaney
Our heroes vainly stood back to back
and the Yeos at Tullow took Father Murphy
and burnt his body upon a rack

God grant you glory, brave Father Murphy
And open Heaven to all your men
the cause that called you may call tomorrow
in another fight for the Green again 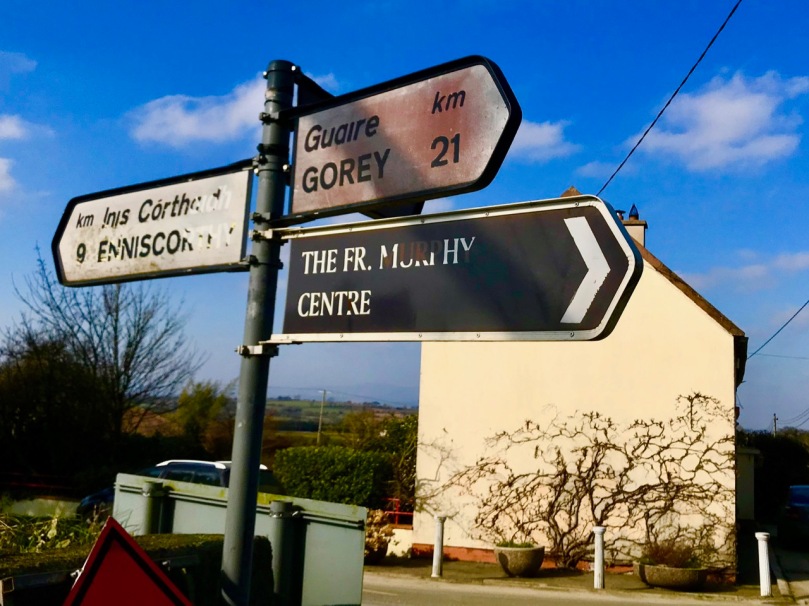 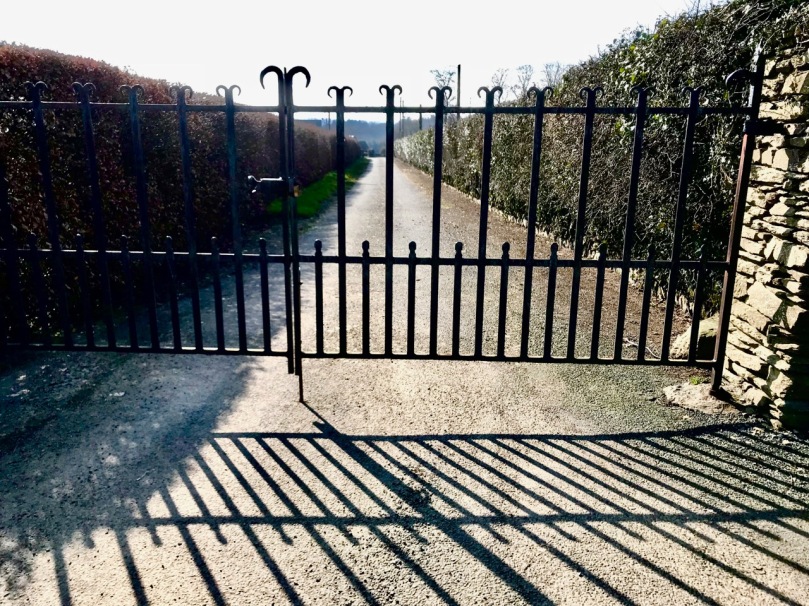 There’s a 1798 Centre in Enniscorthy, but it was closed on the day we visited. We also looked for the Father Murphy Centre at Boolavogue, but the fine iron gates leading down to it were locked up for the winter. This Irish Rebellion deserves more exposure in this Journal – something we will address in the not-too-distant future. But I am pleased to have gained a greater insight into one of my favourite Irish airs: Boolavogue. Here’s an interesting rendering of P J McCall’s version, by ‘Flying Column’ dating from 1972: it’s preceded by Seamus Heaney’s sonnet Requiem for the Croppies, inspired by these same events.