…Across the canal bridge there was a large corn mill which had seen better days but which I was pleased to see was still at work. Moreover it was not, as our few surviving [British] watermills are, relegated by the milling combine to grinding cattle meal. Cloondara Mill was grinding 100 per cent extraction flour for the village bakeries of the district. As we walked over the bridge a small water-turbine was churning merrily, driving the dynamo which provided electric light for the mill and the miller’s house. But the great undershot wheel which drove the mill from the waters of the Fallan River, a tributary of the Shannon, was still and silent. I knew why because, from somewhere in the dim recesses of the rambling stone building I could hear the chip chip of a mill-bill tapping away like some busy woodpecker. This Irish miller, like the English country millers who I have been fortunate enough to meet, was obviously proud of his mill and was delighted by our interest. Having assured himself that the stones being dressed were out of gear, he insisted upon opening the sluice for our benefit, setting the giant wheel revolving with a rumble and surge that wakened the mill and which, via a complex of wooden gearing, shafts and pulleys, set screens and sieves shaking and revolving to the very top of the building…

…There were four pairs of stones, two sets of ‘Peaks’ for meal and two sets of French Burrs for wheat. The runner of one pair of Peaks had been swung off the bedstone, and the dresser sat on a sack, legs astraddle, as he tapped away at the worn furrows with his bill. I had expected to find that the language of the miller’s craft was different in Ireland, but this was not so. Thus the stirrup and shoe which feeds the grain into the eye of the runner stone and whose cheerful clink clack contrasts with the rumble of the stones, our miller, like his fellows in England, called the ‘damsel’. In an earlier book I described how the miller of Minshull Mill in Cheshire used apple wood to renew the teeth of the wooden mill gearing. Here beech wood was used for this purpose… 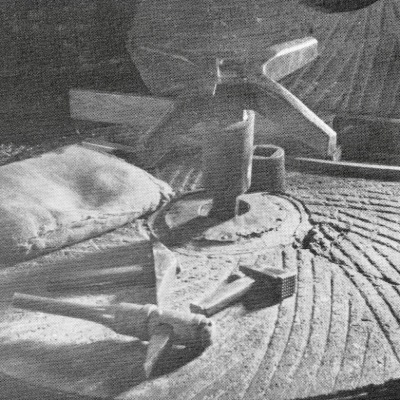 Header photograph: Cloondara Mill, Richmond Harbour, 2016; above, photographs from Windmills & Watermills (John Reynolds, Hugh Evelyn, London 1970) showing a miller and his bills, working much as Rolt described in his book

We spent some weeks in the summer exploring the waterways of Ireland, following in the wake of Tom and Angela Rolt who had made a pioneering voyage in 1946, when the canals were in a state of decline. In fact, the Rolt’s boat Le Coq was the last to make the complete journey through the Royal Canal, which became derelict and finally closed in 1961. When they passed through Richmond Harbour in County Longford – the junction of the Royal Canal with the River Shannon – they paused to visit the corn mill at Cloondara: this mill ceased operations in the 1950s, not long after the Rolts’ visit. 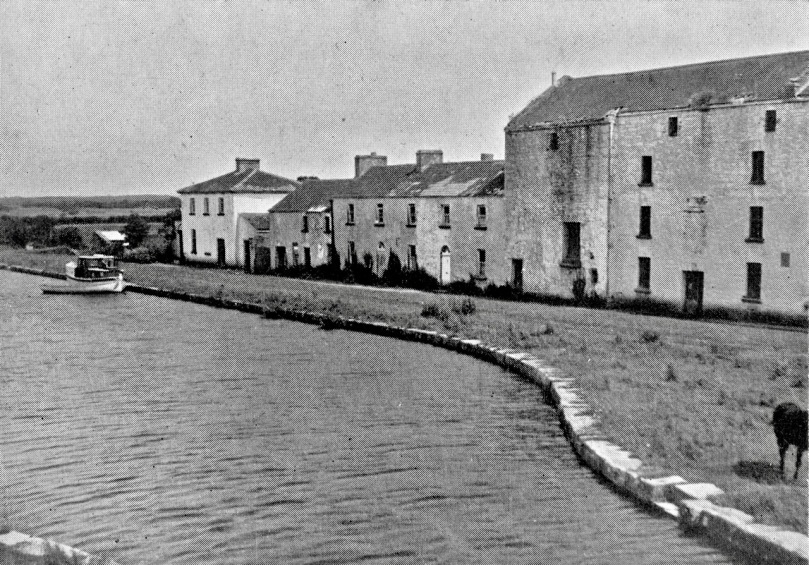 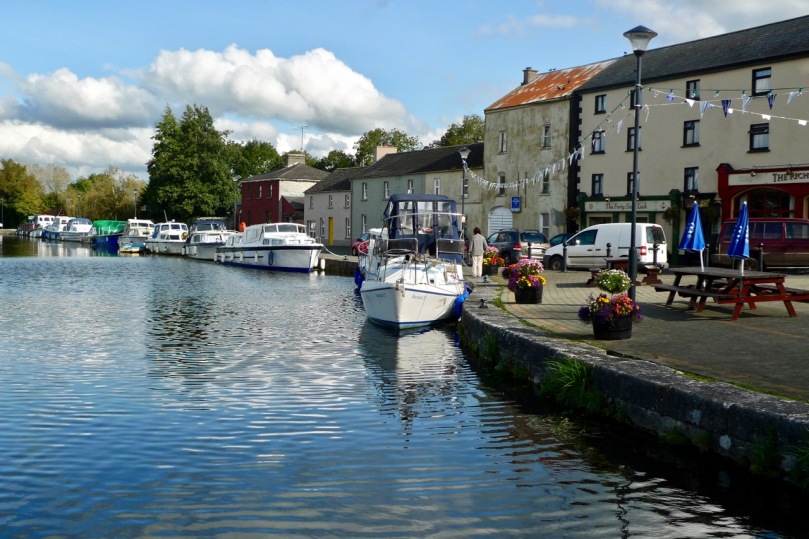 Upper photograph by Angela Rolt: Richmond Harbour in 1946 – the single boat is Le Coq. Lower photograph shows the same scene in 2016, seventy years later; the Royal Canal (which closed in 1961) has been fully restored, re-opening in 2010

We found Richmond Harbour to be a thriving small community; a boating centre which has benefitted from the restoration of its canal. Comparing the two pictures above – separated by a span of seventy years – the architecture of the place has hardly changed: only the buildings on the right seem to have been significantly updated, although they retain the structural form of their predecessors.

The settlement retains its focus on the water, and there is evidence of some economic activity based around the canal harbour. I was particularly keen to see what had happened to the mill which Rolt describes in such detail; it remains, converted to an apartment complex. This seems to be an ambitious undertaking within such a small community: there are vacant apartments and signs that maintenance is falling behind in places, but it has to be a good thing that the project has respected and built on to the original industrial architecture. The impressive building is largely intact and continues to hold its original character, while some of the machinery has been retained to provide historical visual references. 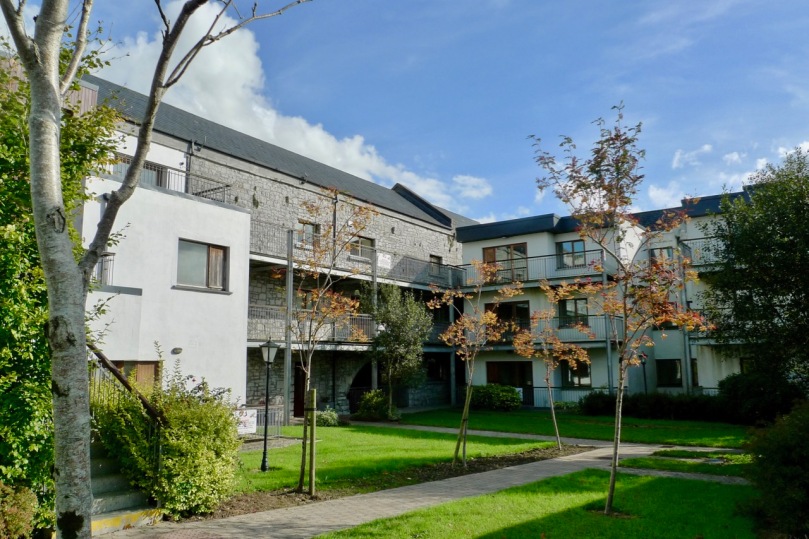 This series has given me a fascinating project to research and record (there’s more to come!). I only wish the Rolts were still around – I would like to discover their own reactions to the evolution of Ireland’s waterways system in the years since they travelled here.