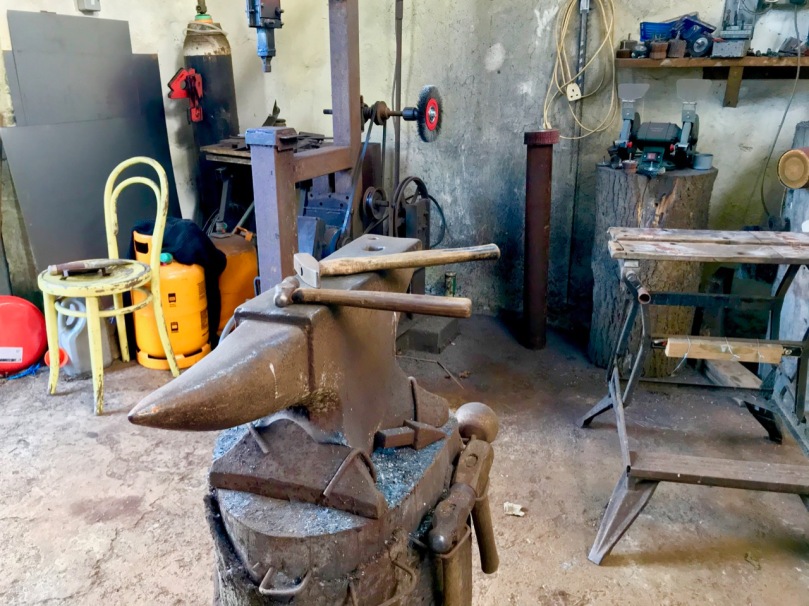 I admire workshops. And I admire the creativity that goes on in them. Here’s one that’s not too far away from us in West Cork: it’s just outside Skibbereen, on the road to Lough Hyne. It belongs to Paddy McCormack, who is a metalworker producing functional and decorative items. His preferred material is copper, and that comes with a historical connection that puts him right back with some of the earliest craftspeople who dwelled in this western part of the land thousands of years ago! 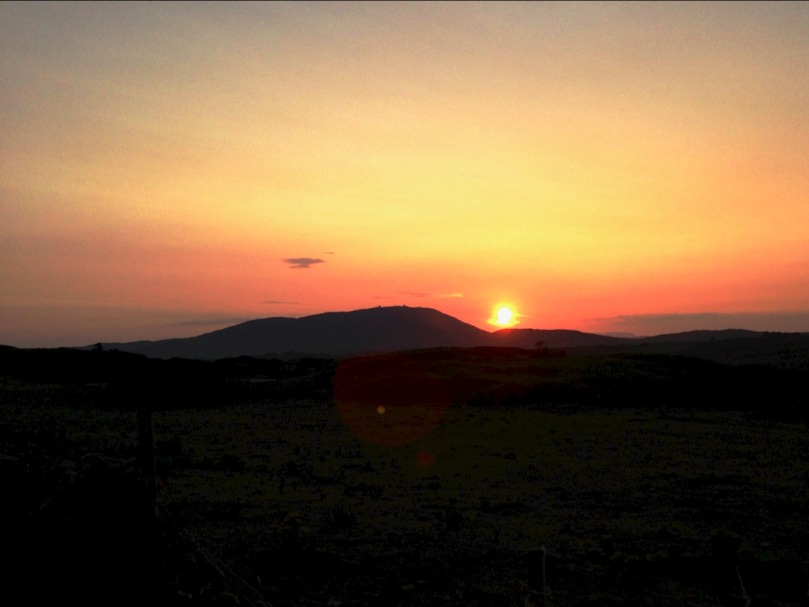 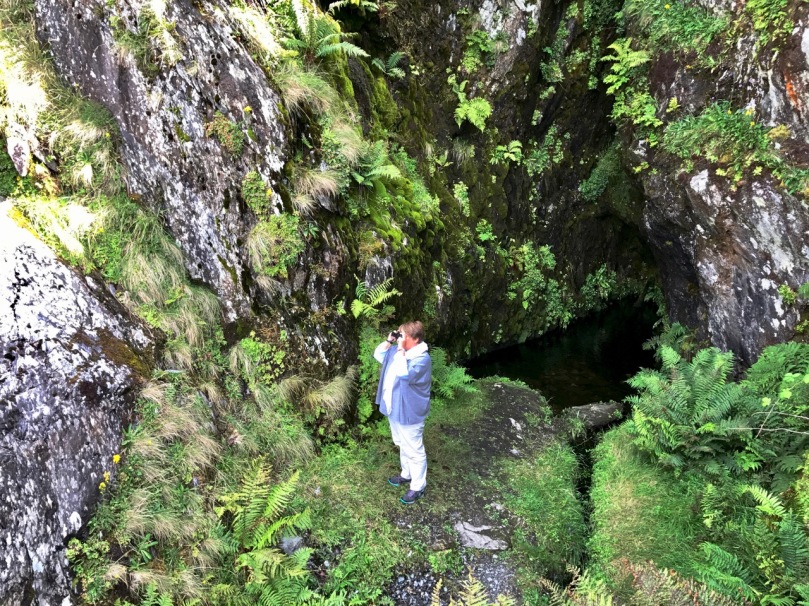 Mount Gabriel, the Mizen’s highest outcrop of land, silhouetted against a copper-coloured winter sky (upper picture) is the site of ancient copper mines dating from the Bronze Age. In the lower pic, Finola is standing at the entrance to an old mine adit driven into the side of this mountain. If you want to see the techniques used by the early metalworkers, have a look at this post which I wrote back in 2015. You’ll find that the methods dating from three and a half millennia ago are recognisable today. Here’s Paddy continuing the tradition: 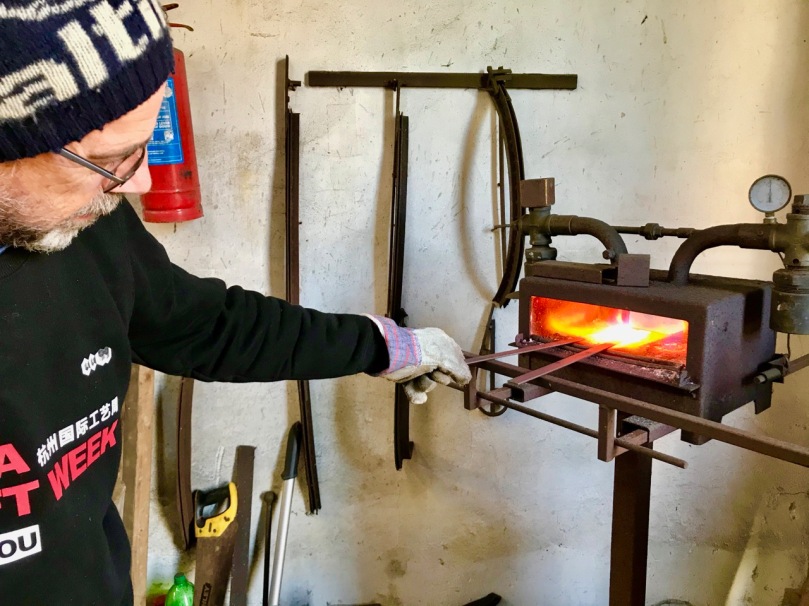 We first came across Paddy at the 7 Hands Exhibition held in London, Dublin, Cork and Ballydehob. In this post written by Finola at the time you’ll see him with one of his unique pieces, a chess set, but it was at another exhibition this year that we became aware of his beautiful, hand-beaten copper bowls. Once seen , never forgotten: we asked Paddy if it would be possible to produce a large bowl for us, more the size of the now much sought-after copper ‘chargers’ produced by the Newlyn artists colony in West Cornwall during the late 19th and early 20th century. I lived in Newlyn before coming here to the west of Ireland and much admired the copper work from that time. 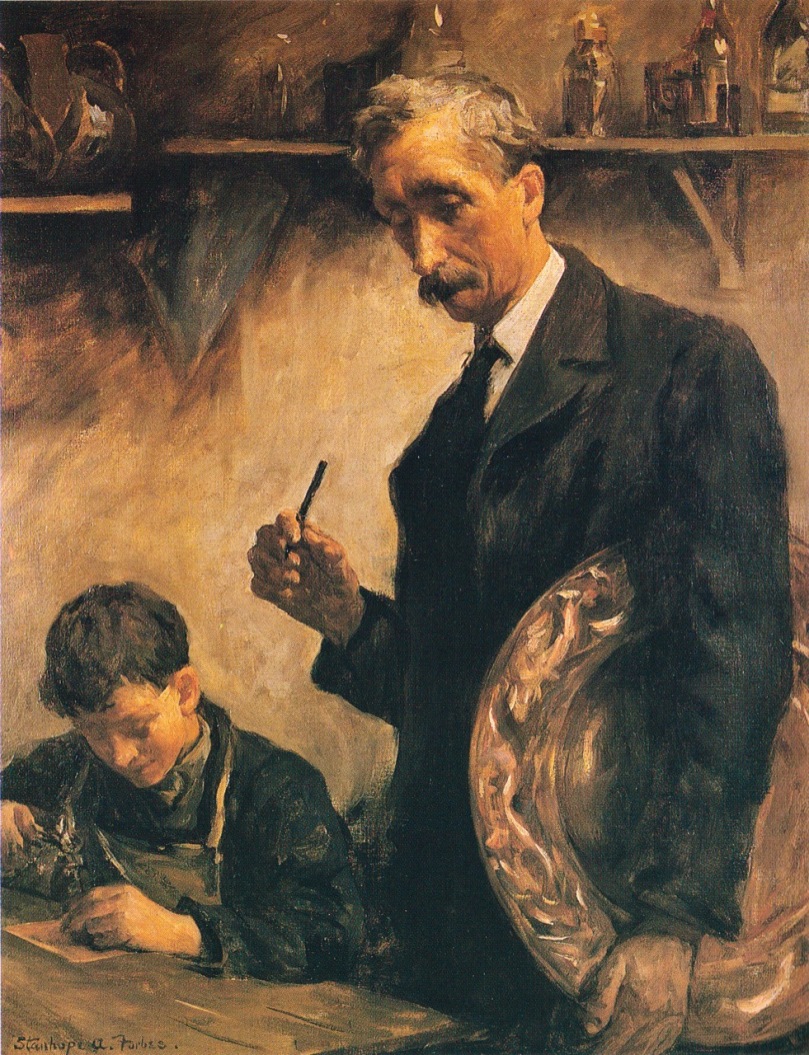 The Young Apprentice a painting by the Irish-born founder of the Newlyn School, Stanhope Alexander Forbes (above). The painting dates from 1908. There is still a copper works in Newlyn today. First established in the fishing village in 1890, copperware production gave us some of the most outstanding work created in the Arts and Crafts tradition of its day. One of the things that impresses us about Paddy’s work is his own way of working the metal surface, creating organic textures and colours which are exquisite. 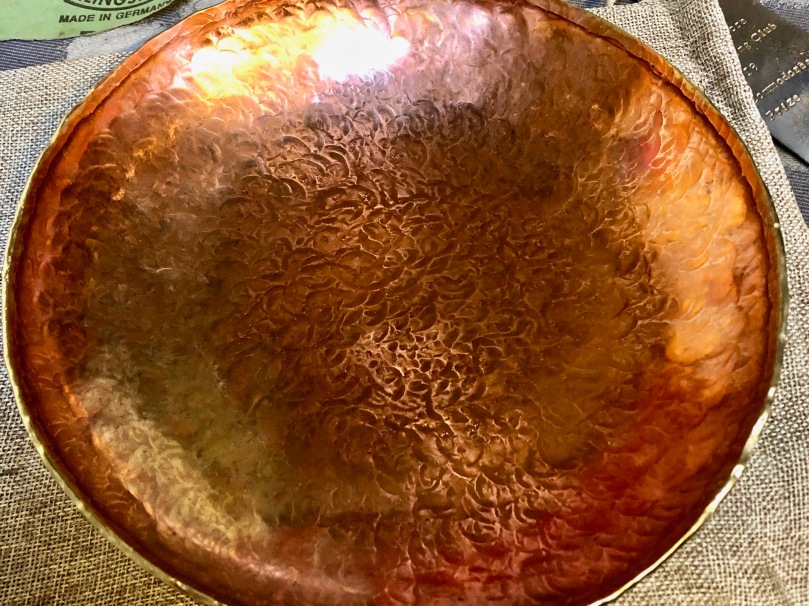 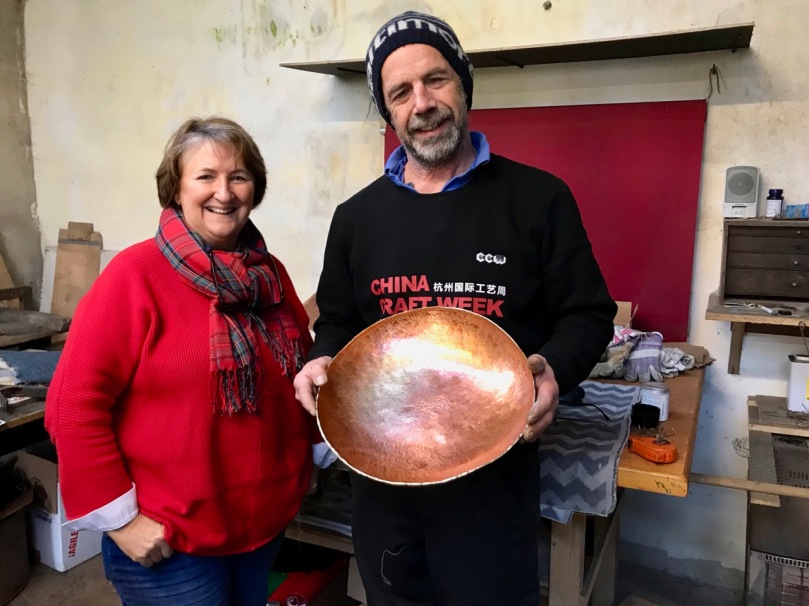 Paddy presenting us with the large bowl which we commissioned. It is elegant and unique, and we are delighted! The richly textured surface shows the marks of the copper being worked and provides an organic finish which will evolve and change colour over time. Paddy has developed his own design for his bowls, with a double skin and welted rim. 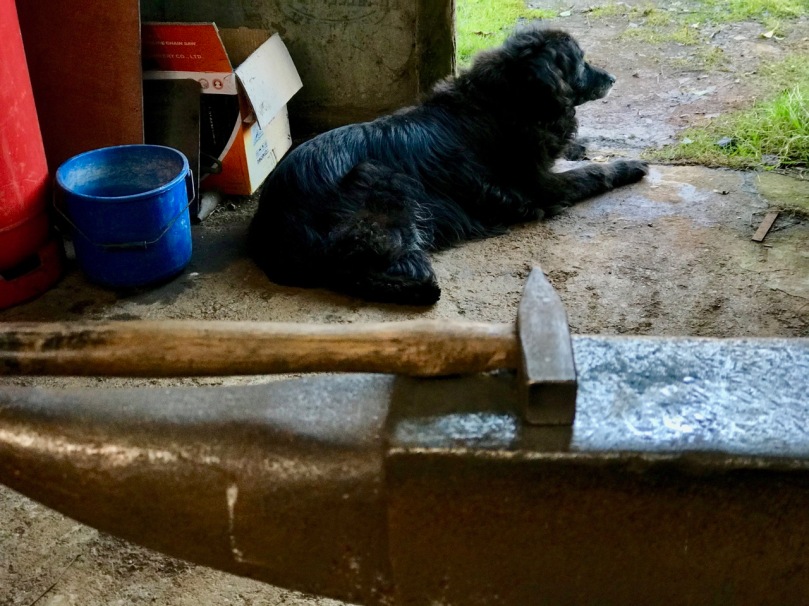 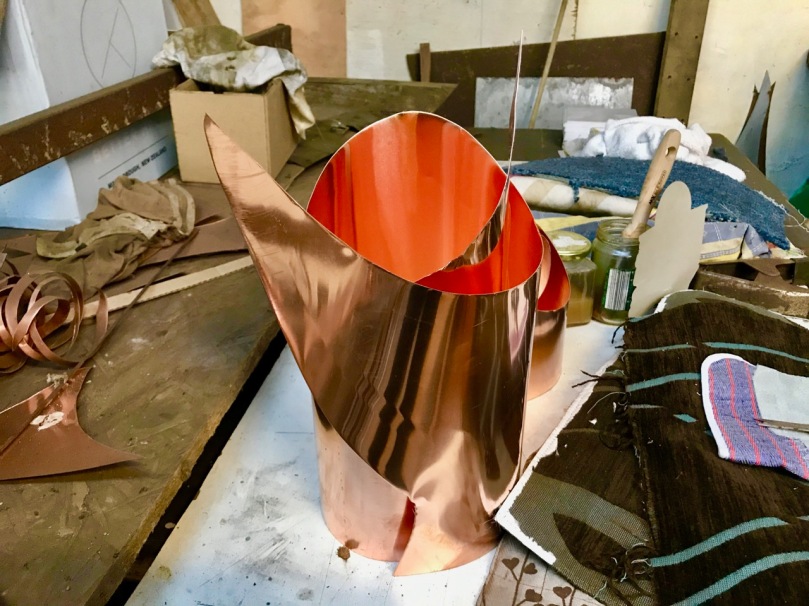 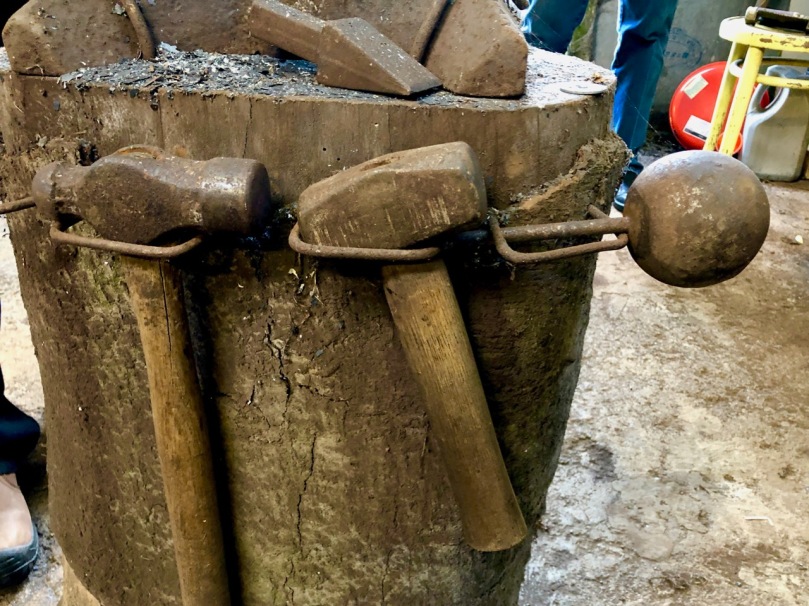 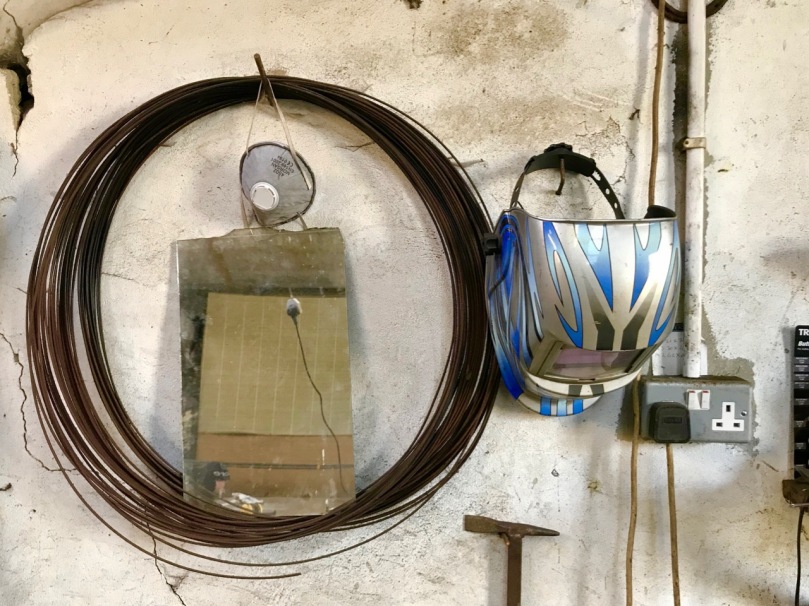 Raw materials and the tools of his trade form Paddy’s working environment. He is comfortable within these surroundings. We felt privileged to meet him in this environment, and could sense his ability to transform his visions into reality through complete mastery of his chosen medium. Examples of his work in the open air show the distinctive patina that develops on copper when exposed to the elements. 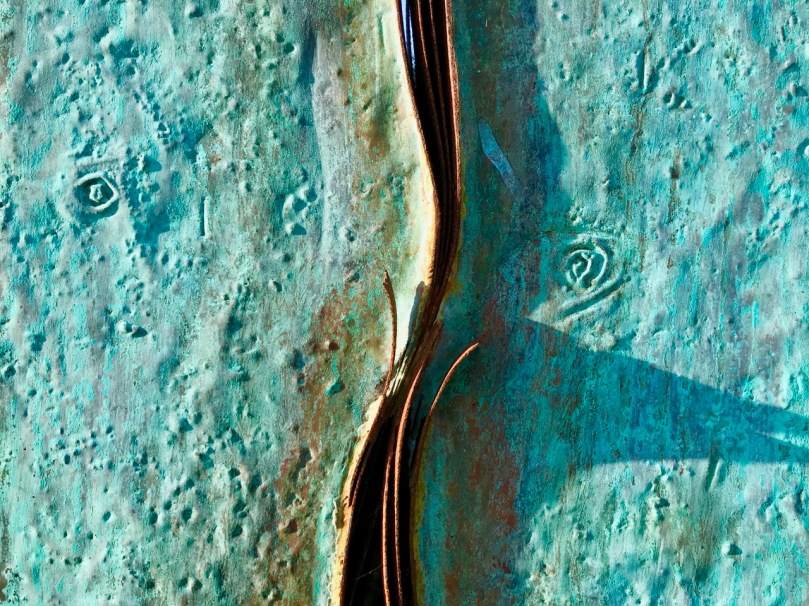 Paddy markets his bowls and decorative copper work through craft outlets and fairs. He recently travelled to China with a group of locally based fellow artists and craftspersons. It’s a small world when a master artist / craftsman from rural West Cork is in demand on the other side of the planet! 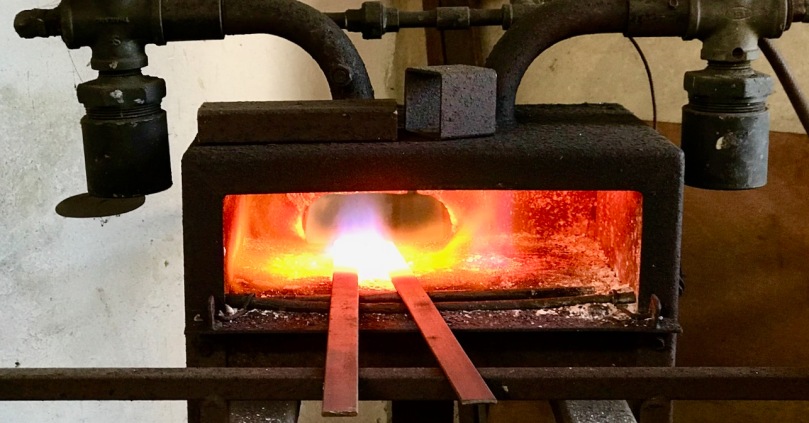