As a student of rock art I am often asked whether a cupmark, the central motif of all Irish rock art, could be just idle ‘doodling’. In response I have usually asserted that making a cupmark is quite a lot of work and therefore unlikely to be the result of simply whiling away time. But I must admit I based that answer on my own guesswork about of the time and difficulty involved, rather than on solid evidence. Well, no more! The scientific evidence is in – read on to see what we found.

First of all, let’s recap what a cupmark actually is. It’s a semi-hemispherical indentation on a rock surface which has been made by a human in the past. In Ireland it’s the most common motif found in prehistoric rock art, often on its own, and also associated with one or more concentric rings, lines extending from the cupmark through the rings, and other lines and grids. It’s usually circular in outline, sometimes perfectly so and sometimes rough and approximate. For a thorough discussion of Irish cupmarked stones, take a look at our post The Complex Cupmark, which has lots of illustrations of cupmarks, both on their own and with cup-and-ring marks. It’s a good introduction to what we are talking about and where they are sited in the Irish landscape.

Oliver found that the first part was the hardest – almost, he said, as if there was a skin you had to break through

Grand so – now you know all about cupmarks except for how, really, they were made. Our friend Oliver Nares became interested in this topic having read our blog posts, and decided that this question should be answered once and for all. In doing so, he has provided a real service to science. 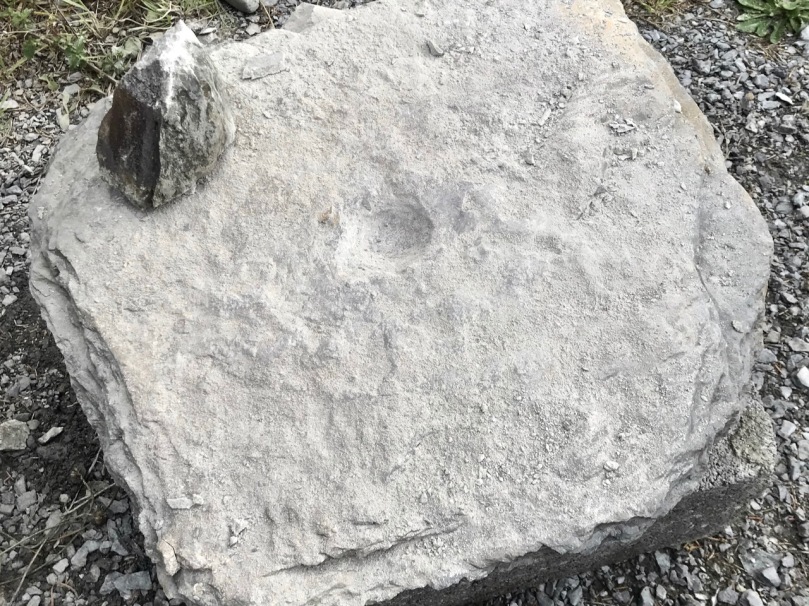 Once through the ‘skin’ things went a little faster and the hammering action raised lots of dust. In some ethnographic studies of cultures that carve cupmarks it appeared that the dust was one of the desired outcomes and played a part in whatever rituals were involved

Believing that he should replicate as closely as possible local conditions, Oliver selected a piece of local sandstone as his base. The technique used to carve is often described as ‘picking’ – that is, repeated taps on the surface of the rock by a stone ‘pick’. No metal was used: the cupmark tradition, although it persisted in time well into the Bronze Age, started in the Neolithic before the invention of metal tools. Copper or bronze would not have been strong enough anyway. 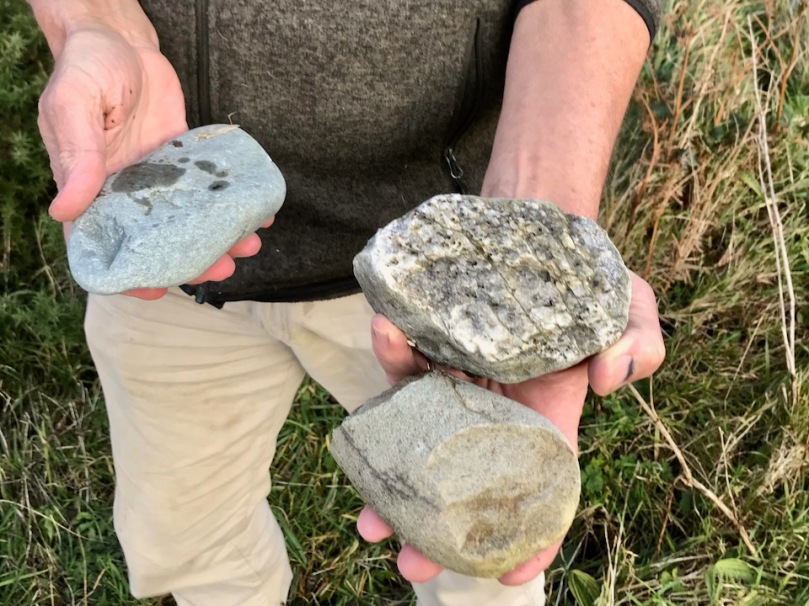 Oliver started with a quartz pick, reasoning that, as one of the hardest local minerals, this would be the ideal stone. However, he soon realised that the quartz stones he could find were not large enough to make a serious impact on the sandstone surface.

He gathered a variety of water-rolled cobbles from a local beach and worked away until they became too chipped, or until they broke. In this way he went through at least a dozen cobbles, perhaps as many as twenty.

On one visit to watch progress I took a turn. What I found hard was maintaining the round shape – as you can see my hammering was turning Oliver’s lovely circle into an egg-shape

A pick is generally a pointed tool – a bit like a hammer but with a pointed tip that allows a geologist, say, to split rock to take samples. Modern picks are made of very hard steel. In practice, it is almost impossible to find a stone that will mirror the pointy-ness and the hardness of a steel pick. Oliver found that hammering or bashing with a cobble was actually the only way he could make headway on carving out the cupmark. Perhaps picking, in fact, is not quite the right was to describe the technique.

Once the cupmark was as deep and round as he wished, his next step was to smoothen the inside. We have noted this as a feature of cupmarks – when you run your fingers around the inside they do feel more smooth than rough. In fact, a rough surface is often an indication that the ‘cupmark’ is actually a naturally occurring geological anomaly or solution pitting rather than the product of human labour.

At first Oliver used only water to grind away at the surface (above), but soon added beach sand (below) and saw an immediate improvement. His finished product – a cupmark 12cm across and 3.5 com deep – was nice and smooth inside. In terms of size, this cupmark falls well within the normal range of variation in the cupmarks we have seen.

So, how much time did this actually take, and how much work was it? Oliver estimates that he put between 20 and 25 hours into making this cupmark. Despite being tall and strong, he couldn’t work on it for too long at a stretch because, as is obvious in the videos, repetitive strain and muscle damage was a real hazard.

What Oliver has shown is that nobody would carve a cupmark unless they were deeply motivated to do so. It must have been an important activity associated with some aspect of the culture that required the kind of labour involved. Perhaps long practice enabled prehistoric carvers to make a cupmark in less than the time that Oliver took but there’s no denying that even for an expert this is a significant undertaking.

Thank you, Oliver, for all that effort! And thank you too for the cupmarked stone itself, now occupying a space outside our door. it looks great – but more than that it is a constant reminder of both your generous donation of your time in the cause of science and the age-old tradition of cupmark carving and the mysteries that lie at its heart.