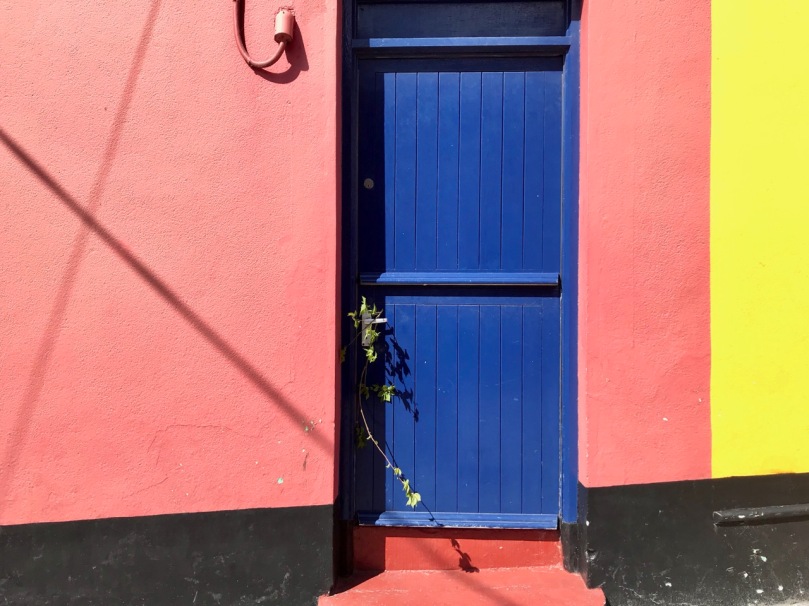 Surviving tradition in Ireland – a May garland seen on a threshold in Schull, West Cork. on May Day this year

We are in the month of May. How significant is that here in Ireland? Well, if it’s any indication, it’s a fact that Irish folklorist Kevin Danaher (1913 – 2002) gives far more space in his writings to May and traditional May customs than to any other single subject or season.

Kevin Danaher of Athea, Co Limerick, at the Irish folklore Commission in 1954. the photographer was Dorothea Lange, who features in this post

In the west of England, which has always had close links with Ireland in terms of language, culture and industry – the month of May has long been celebrated with a strong focus on the ‘Hobby Horse’, a phenomenon which bridges the worlds of superstition, spectacle and folklore. In two places – Padstow in Cornwall and Minehead in Somerset – Hobby Horse (or, colloquially ‘Obby Oss’) festivals are huge events – usually. In 2020, sadly, both had to be cancelled due to Covid19 restrictions: probably the first time in hundreds of years that they have not taken place. The Minehead Oss has a recorded history that goes back to at least 1465, while in Padstow they will tell you that the Obby Oss has been revered forever on the First of May with never a break. 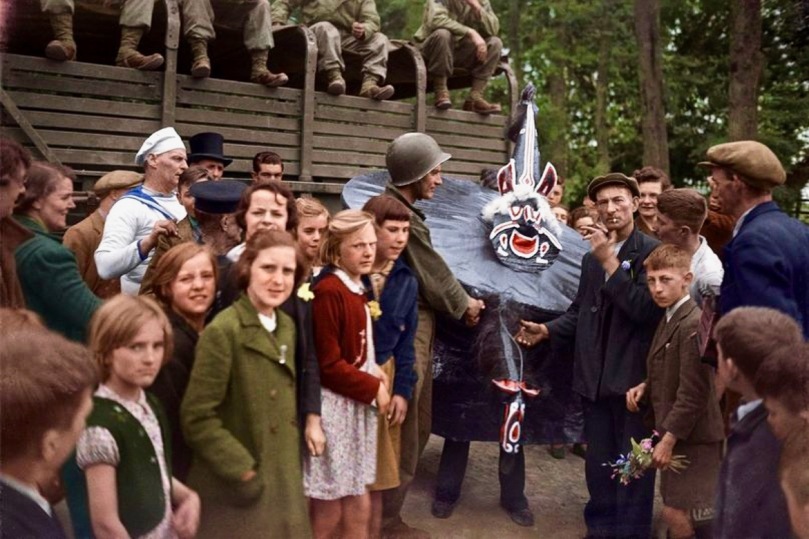 The Padstow Oss has survived through peacetime and wartime. This rare photograph (above) – attributed to Joshua Barret – was taken in 1944, while the early 20th century photograph (below) of the Minehead Oss is my all time favourite of a folk custom: the Oss always has and always will perambulate the town every year, even if no-one is interested in watching it!

As we find this very strong May tradition thriving (usually) in the west of England, we might expect to see an equivalent in Ireland, but you can’t immediately think of a Padstow or Minehead equivalent. Oh, yes – the Hobby Horse is purely Irish, in that there was once a now extinct breed – called a Hobby – which is said to have been the genetic source of all race horses since pre-Roman times!

. . . It is possible to trace the root of the Irish Hobby back to the northern Iberian Peninsula where this peculiar population of horse seemed to first be recognised about 700 BC, identified as the Celtic Horse. It was a small horse, gaited and exceedingly fast. It was the fastest horse in the known world back then, by 400 BC the Greeks called them the Thieldones and immortalized them on the frieze of the Parthenon, and this breed was already the Roman’s preferred steeds for racing. Pliny even writes about them in 77 AD, and we know when the Romans invaded Britain they brought those horses with them. But the Romans found that when they arrived they were met by the natives who had Celtic Horses already–horses which had been brought to Britain centuries earlier in trade from Spain by the Phoenicians for the metal mined there . . .

I won’t dwell on this idea that the Irish Hobby Horse was the ancestor of all modern pure bred sports horses – and was probably responsible for the innate Irish love of everything to do with horses and sport – as I am getting completely out of my depth here, and it’s all a bit off-topic anyway! Although, who knows how and where that name might have migrated over the centuries?

The culmination of the Padstow ceremony on May Day is the ‘meeting’ of the Red and Blue Oss at the huge maypole in the Town Square on the evening of the day (above). They have to close the town to all traffic because of the enormous crowds who attend, and you can see why the ‘social distancing’ rules could never have been applied to the event. Let’s hope that in future years ‘normality’ will have returned sufficiently to our lives to ensure that these ancient customs continue. In my lifetime I have been to Padstow on May Day at least thirty times, and also to Minehead on many occasions: I have good memories of them both. 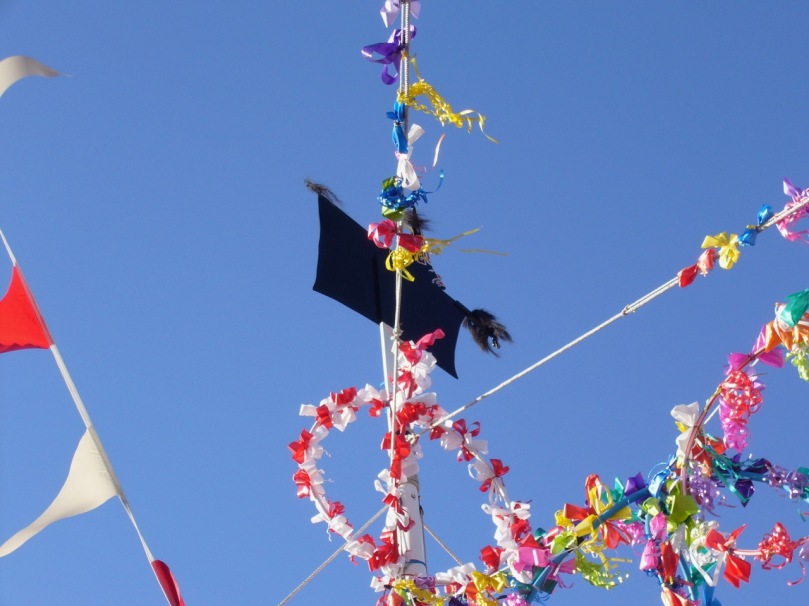 In order to find a precedent in Ireland for a traditional Oss, I have mined the enormous archive that Kevin Danaher left behind in the Irish Folklore Commission, and I am pleased to report a whisper of success! Danaher uses various sources to summarise an account of traditions taking place in Ireland on May Day:

From the diary of Joshua Wight, a Quaker, we learn that so late as the middle of the eighteenth century, propitiatory rustic processions took place in the south of Ireland. The observer records, that about noon in the month of May, 1752, there passed through the streets of Limerick many thousand peasants marshalled in companies, representing various branches of agriculture…

And Thomas Crofton Croker (1825) tells us of what he calls mummers:

‘They consist of a number of the girls and young men of the village or neighbourhood, usually selected for their good looks, or their proficiency, – the females in the dance, the youths in hurling and other athletic exercises. They march in procession… Two of them bear each a holly-bush, in which are hung several new hurling-balls. the bush is decorated with a profusion of long ribbons which adds greatly to the gay and joyous, yet strictly rural appearance of the whole. The procession is always preceded by music; sometimes of the bagpipes, but more commonly of a military fife, with the addition of a drum or tambourine. A clown is, of course, in attendance: he wears a frightful mask, and bears a long pole, with shreds of cloth nail to the end of it, like a mop, which ever and anon he dips in a pool of water, or puddle, and besprinkles such of a crowd as press upon his compassions, much to the delights of the younger spectators… The Mummers during the day parade parade the neighbouring villages, dancing and receiving money. The evening, as might be expected, terminates with drinking’.

Patrick Kennedy, in The Banks of the Boru, describes a similar procession:

‘After a reasonable pause we had the delight of seeing twelve young men come forth, accompanied by the same number of young women, the boys dressed much more showily than the girls… To heighten the beauty of the spectacle, out sprung the fool and his wife, the first with some head-dress of skin, a frightful mask, and a goat’s beard descending from it. Though we knew that the big bluff, good-natured countenance of Paudh himself was behind the vizard, we could scarcely refrain from taking flight, not being able any more than other children to look on an ugly mask without extreme terror. His wife (little Tome Blanche, the tailor) was in an orange-tawny gown, flaming handkerchief and mob-cap, and had a tanned, ugly female mask, fitting pretty close to her face. Paudh’s first salute to his friends was a yell, a charge in various directions, and a general thrashing of the crowd with his pea-furnished bladder suspended from a long stick. Mrs Clown had a broom, and used it to some purpose when she found her friends disposed to crowd her.’

There is also mentioned by Sir William Wilde, together with something like a hobby horse (Popular Irish Superstitions, 67):

‘From Monaghan we have a graphic account of a somewhat similar proceeding: there the girls dressed up a churn-dash a s a “May babby” and the men, a pitchfork, with a mask, horse’s tail, a turnip head, and ragged old clothes, as a “May boy” but these customs have, we believe, long since become quite obsolete.’

The mask worn by the Obby Oss at Padstow could have evoked the description by Patrick Kennedy, above: some head-dress of skin, a frightful mask, and a goat’s beard descending from it . . . This particular representation, once used in the Padstow processions, is now a museum piece. So here I present my argument that we can find descriptive evidence of traditional Hobby Horses in Ireland as part of the May festivities. If anyone finds other instances or has direct personal experience or stories passed down which involve Hobby Horses, or activities which sound like the examples described in Danaher’s reports, above, please let me know.