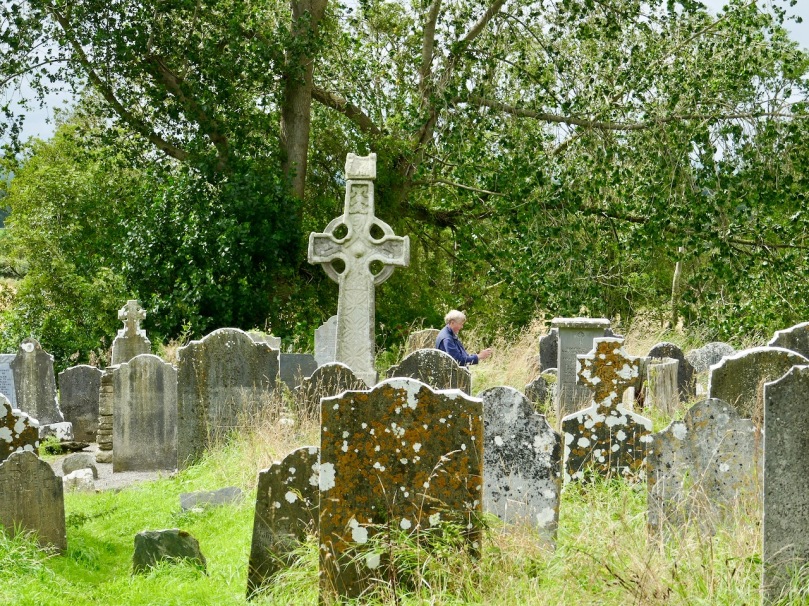 We haven’t had an ‘Off the M8’ for quite some time. You remember that, on our journeys from West Cork to Dublin, we would go (literally) off the beaten track to find new places of interest to visit – making a ‘grand day out’ of every trip. However, the unexpected arrival of the Covid19 pandemic severely curtailed our travelling – and everyone else’s – for many months. Covid is by no means over, even now, but we are slowly venturing further afield and, last week, made the trip up to the Dublin area, following all the guidelines. Nevertheless, we couldn’t resist trying out a fresh route which adds about 40 minutes to the overall journey but which takes in a new (for us) medieval stone cross and a historic site with thought-provoking associations. It is situated with fine views of the Slieveardagh Hills to the west.

We followed the normal route as far as Cahir, on the M8, then headed off east on the N24 and N76 towards Callan. Just after Ninemilehouse (Ireland has some wonderful place names!) you cross from County Tipperary into County Kilkenny and, within a few minutes (watch carefully), you’ll see a small signpost directing you off to the right down a tiny boreen to Killamery High Cross.

The first thing you’ll see, at the end of this lane, is the ruin of a significant church. Some distance beyond it you’ll make out the distinctive shape of the large, carved stone cross but also many other treasures including old grave slabs, bullaun stones and a very fine holy well dedicated to Saint Nicholas.

The site is associated with an Irish holy man, as you would expect: Saint Gobhan, Gobán Fionn, Gobban – or even Gobanus – who lived from c560 to c639AD. Foundations associated with this saint were many, including Portadown, Co Armagh, in the north; also as Abbot to the monastery of Old Leighlin, County Carlow, where in 633AD he presided over a great Synod held to debate the timing of Easter (we seem to remember only the later Synod of Whitby – 664AD – which also set out to regularise the date but which led to irreconcilable disagreement between the Irish and Roman factions). Latterly, Gobhan was linked to the Kingdom of Kerry – near Tralee, but we are interested today in the monastery he set up by a holy well in Killamery. He had a thousand monks with him and it is said that an army of angels helped build the walls.

The angels must also have helped to eradicate that monastery as there is now no trace of Gobhan’s foundation in County Kilkenny, just a lonely 19th century church, the well (pictured above), a burial ground and this very fine High Cross. The cross is well worth a visit: some say it’s the oldest of the Western Ossory high crosses, which are themselves considered to be a distinct group. I have looked previously at the Kilkieran examples. Here at Killamery there is just the one cross and, perhaps for that reason, it stands out in the memory. Some scholars reckon it could be 8th century, but most attribute it to the 9th. It’s ancient by any standard, certainly, and it’s probably unavoidable that the carving is so weathered. 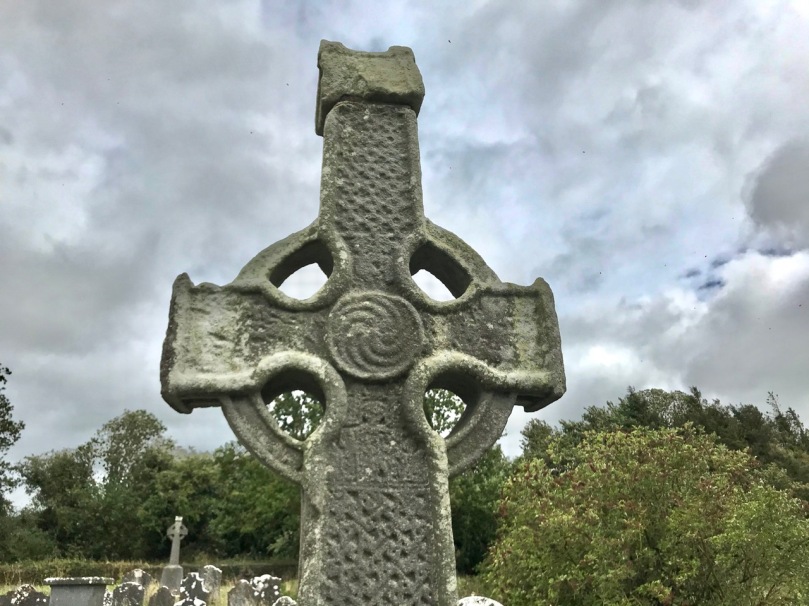 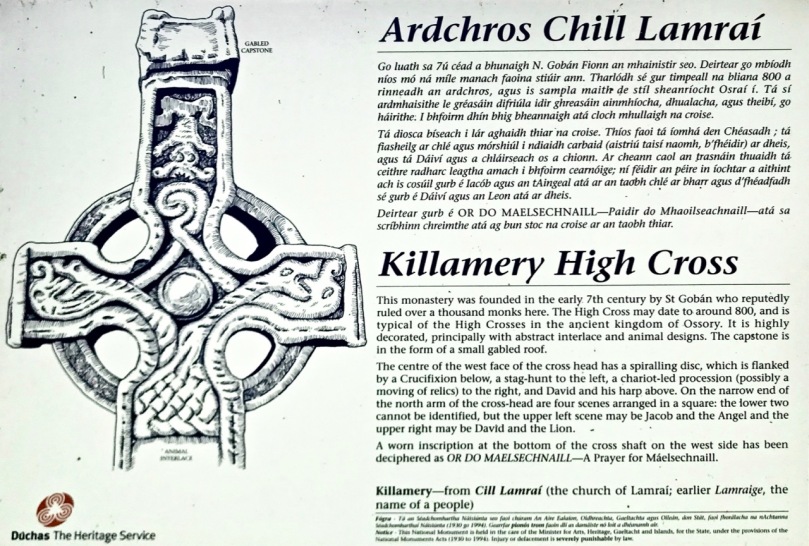 The Duchas signboard (above) describes the scenes depicted on the various elements of the cross,  but most of what we can decipher today is limited to geometrical patterns – very much in the ‘Celtic’ tradition. There may have once been other visible motifs: the large plinth stone is completely worn on all surfaces. 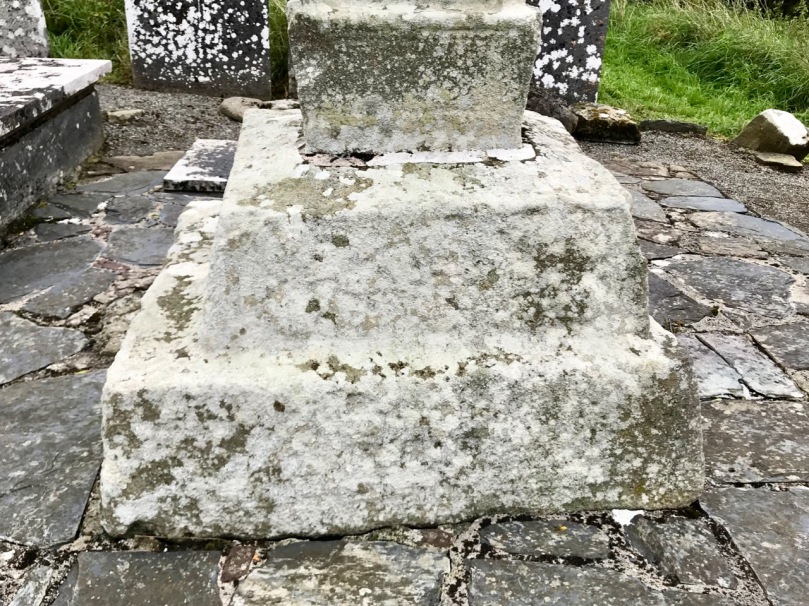 The cross certainly predates any of the other artefacts, bullauns and stone markers which surround it today, but it is likely that the adjacent holy well is even more ancient: it is dominated by an intriguing, large shaped monolith.

Among the artefacts which have arrived at this site is a fine 17th century (probably) cross slab and a memorial to the United Irishmen who lost their lives at nearby Carrigmoclear in 1798 – both shown below.

The origins of Gobhan himself merit some consideration. He has associations with metalworkers and, of course, we know that Saint Gobnait was their patron saint. Could there be some fusion of names in folk history and oral tradition? Like Gobhan, Gobnait is revered at many sites around Ireland and undertook diverse travels around the island in search of the nine white deer which set her destiny. 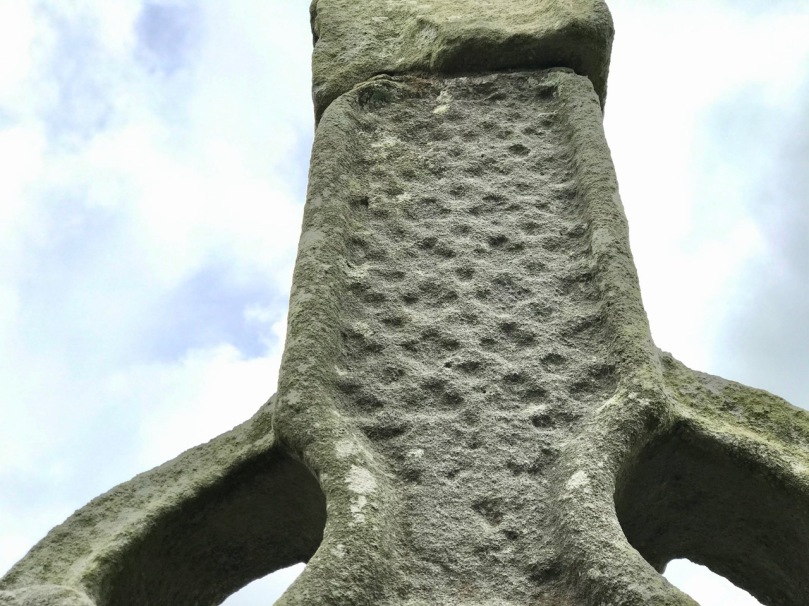 There’s nothing more Irish than the experience of finding references to hundreds of years of history hiding down a lonely boreen to nowhere in the rural heart of this land. More than anything, it makes us want to know more. What is real? What is myth – although made to seem logical and credible through stories which are still told? Of course, we can never know the reality, but we can share in the spirit of the stories, and wonder at a piece of stone beautifully carved, perhaps, thirteen hundred years ago . . . 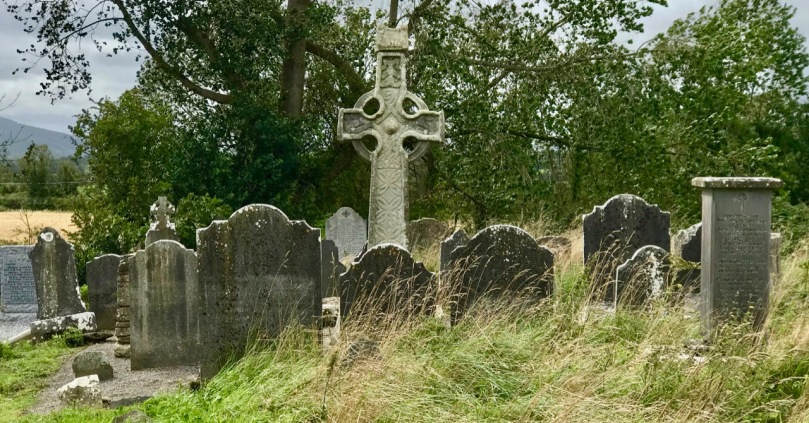 Once you have visited this fascinating site, find your way across to the M9 (it’s straightforward enough) and you’ll be up to the big city in a jiffy!