This post was originally written in 2017. I have provided an update at the end.

All the names in this story have been changed. However, it is a true account of how we came to lose one of our ancient monuments – at once a family and a national tragedy.

This is my drawing. It shows an excellent example of Irish rock art, a classic cup-and-ring design, deeply carved – a thing of beauty, antiquity and intrigue. I know it now as The Broken Stone.

The drawing was done in 1972, while I was recording all the known examples of rock art in Cork and Kerry, travelling on a Honda 50 with with my equipment in a backpack. The sun shone every day that summer. Everywhere I went I was received with kindness and friendship, nowhere more so than at the big farm house owned by Tim and Clair Flynn. The stone was in their garden, having been found in a bog a short distance away and brought to the house in Tim’s grandfather’s time.

Tim ran the farm, and Clair looked after everything else, including three small children. They were lovely people – they took me in, fed me, took a great interest in the research. I felt I had made friends. On a second visit I observed Clair giving two of the children antibiotics and asked why. She explained that two of the three, Niamh and Shane, although not the youngest, Ciara, had a genetic disorder called Cystic Fibrosis. I had never heard of it, and Clair explained that both parents had to carry the gene, that it primarily affected the lungs, and that it was eventually life-limiting. In fact, at that time, life expectancy for those with the disease was about 20.

Through 40 years, mostly spent in Canada and in arenas far removed from Irish archaeology, I never forgot the Flynns or their wonderful stone. It was a happy memory, coloured by the sadness of the inevitability of the progression of the children’s’ disease.

When Robert and I re-engaged with rock art again in the last few years, I knew that sooner or later we would work our way from Cork to Kerry and I would have an opportunity to go again to Flynn’s farmhouse. In anticipation of this, I went to the National Monuments record, to remind myself of the details. To my surprise, I found a record that stated: There are no visible remains of any cup-marked stone here. It was set between two rocks in a prominent position in the garden but was subsequently broken. Its present location is not known. This made no sense to me: a stone like that, which could not be mistaken for anything except an ancient and significant artefact, could not just disappear. Perhaps it was simply not located by the surveyors. Perhaps it had been moved for some logical reason – it was less than a metre long and it was moveable. If it had been ‘broken’ that would make it more moveable yet.

Then, recently, I met Alison McQueen, tasked with updating the rock art records, and asked her about the stone. Since it had disappeared, it was not on her list to visit, but it turned out that she herself had visited the Flynns years before, although her interest was not in the rock art, but in the trough that was also located on the yard. It was a medieval basin that had been brought, over a hundred years before, from Mount Brandon to be presented to Tim’s Great-Grandfather in recognition for his political work and his support for causes such as Catholic Emancipation and land reform. Alison was able to tell me that the Flynns, ageing, and with Tim no longer able to farm, had sold the house and moved a short distance away, taking the trough with them. Of course! They must have taken the stone too, I realised, and that’s where I would find it.

And so, on a recent trip to Kerry, we travelled to the farm. There was nobody home (and a quick snoop around the garden confirmed there was no stone) so we knocked on a neighbour’s door and were kindly directed to the new house, where we were told, Tim and Clair’s daughter-in-law lived, who would be able to help us.

This is how we met Ciara, the surviving member of the Flynn family, and came to hear the story of the stone. Ciara just happened to be there, that day, spending time with her brother’s children. Her brother, Shane, despite all the health challenges he faced, had defied all predictions and only passed away last year. He was, by her accounts, an adventurous and determined man who lived every moment to the fullest and fought the good fight as long as he could, including undergoing a double-lung transplant. He worked and travelled and married – his two children were bright and curious and charming. His widow was not there when we called.

It has taken Ciara a long time to come to terms with the story of the stone – many many years – but she finally felt ready to tell it. She loved it as a child. She and her brother and sister didn’t know how old it was exactly, or anything about rock art, but they made it the centre of many imaginative games, as children the world over do with special features in their surroundings.

As an adult Ciara moved away in the course of her work. During this time, her sister, Niamh, became a staunch member of a Christian Fellowship church. Gradually, Niamh became convinced that the stone represented something evil. It worked on her mind until she was certain that blood sacrifices had been performed there in pagan rituals, and that it continued to exert some kind of malign influence, and in this she was supported by her church. She determined that it must be destroyed. Her parents were aghast, and refused to countenance this plan. However, by this time, Tim was ill and unable to participate in any real decision-making. Niamh launched a campaign to convince her mother. It was relentless and highly charged and Clair, in desperation, finally gave in.

A neighbour with a large digger agreed to destroy the stone. When I asked Ciara if anything was left, she said, she had never been able to find any remains and had been told by her family that it had been ‘reduced to dust.’

When Ciara returned from a term in Belfast shortly thereafter to discover what had happened, she was heartbroken: so distraught, in fact, that it caused a rift with her family for a time. Over the next few years, however, loss piled upon loss, as she lost her parents, her sister, and finally her brother. (In a typically Irish twist to the story, the neighbour who had crushed the stone was himself killed in an accident.)

In the face of grief the issue of the stone receded to the background but was never forgotten. Ciara has brooded over it in the intervening years and when we knocked on the door that morning, she decided she was finally ready to let go of the secret of what had really happened to the stone. I applaud her grace and courage, and I have immense sympathy for the Flynn family and the difficult path they have travelled.

As far as I know, this drawing is the only record we have of The Broken Stone. One of the questions we face as we study rock art is – Is it safe? The answer is complicated: while most of it has enjoyed a measure of protection due to its remote location and relative anonymity, there are many real threats that can negatively impact on rock art in the field, from weather to overgrowth, land clearance, forestry and outright vandalism. But I could never have written a script like this, or predicted that a fundamentalist form of Christian belief would be responsible for the destruction of a beautiful and iconic piece of rock art.

As regular readers know we bought our house in West Cork in 2012. However, I continued to have a base in Canada and had not fully moved over all my possessions until several years later, after I had written this piece. Among the boxes were a lot of slides (remember those?) dating mostly from my life in Canada. They sat, waiting for me to go through them, in a corner of the study until recently, when I could put the task off no longer (and yes, all you organised people, I can hear you silently judging me).  One of the boxes contained old black and white slides from the early 70 and my heart beat a little more quickly as I realised that it might contain a photograph of the Broken Stone – and it did! I have had the old slide digitised and here it is. The stone may be gone, but at least we have the drawing – and now the photograph. 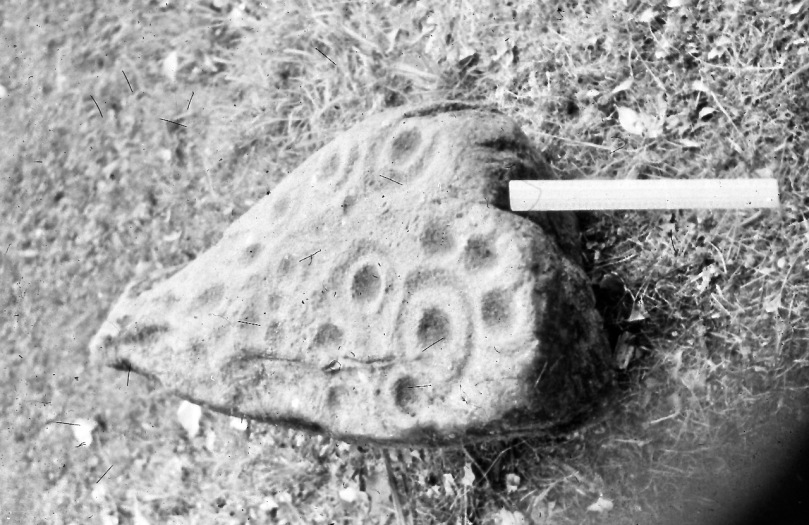 For more on the topic of Irish Rock Art, see our Navigation Page, Section C2