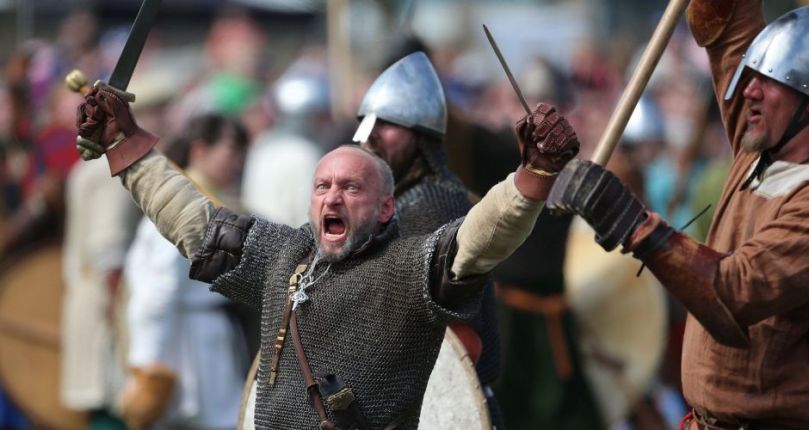 …Fierce is the wind tonight, it ploughs up the white hair of the sea – I have no fear that the Viking hosts will come over the water to me… 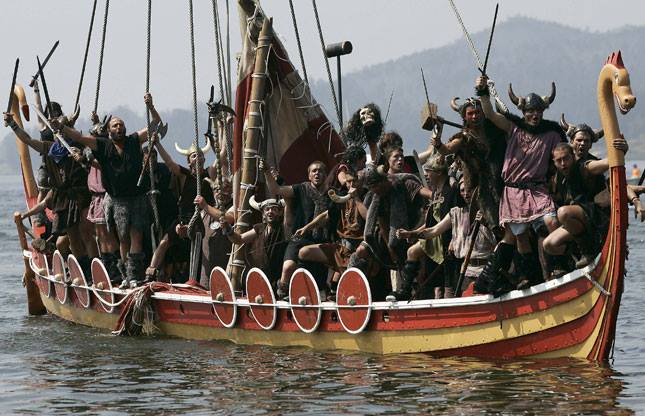 The Vikings are coming!

There was a great battle fought in Ireland on Good Friday.

I don’t think that’s very likely in this day and age.

It is in Ireland: the Battle of Clontarf was re-enacted this Easter – 2014 – exactly 1,000 years after it took place. 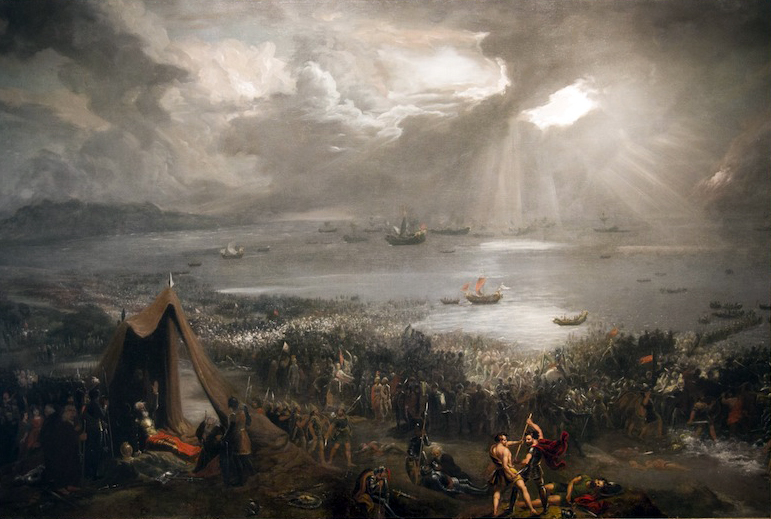 So what’s the connection with West Cork?

Well, the victor of the battle was Brian Boru, and he was at one time the King of Munster – crowned on the magnificent Rock of Cashel. That is, before he became the High King of all Ireland – seated at Tara, County Meath, and before he decided to take up arms against the Vikings. 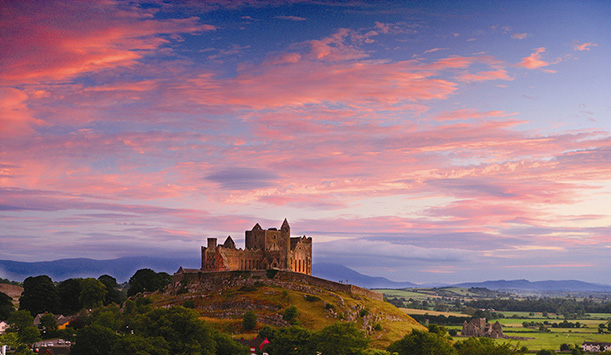 The Rock of Cashel

So, this was a battle between the Irish and the Vikings?

Irish history has always been complicated. The first Viking raids on Ireland took place in the eighth century. Initially they were aimed at the rich ecclesiastical centres but eventually the raiding parties became colonising parties, and by the tenth century there were many settlements of Norse people in Ireland who mingled, married and traded with the locals. As always there were factions within factions and the Irish clans – who frequently picked fights with each other – formed allegiances with some of the colonisers while falling out with others.

So, who won the Battle of Clontarf?

Well, in 2014 everybody did: there were no casualties. But in 1014 Brian Boru’s forces (which included some Viking allies) lost 4,000 of his 7,000 followers while on the other side the opposing mainly Viking forces (but including a contingent of Leinster men who had fallen out with Brian Boru) lost 6,000, leaving them only 500 standing on the field. You could say that it was a rout – and legend has it that Brian Boru drove the Vikings out of Ireland.

So we’ll put that down as a win for Brian then?

In a way, but sadly he didn’t live to see it. At 74 he was too old to fight and he spent the day praying in his tent. Brodir of Mann, one of the fleeing Vikings, found him there and murdered him.

That’s a bit much…

Yes, not exactly the end you’d like to see for such a hero. But I suppose it made him a martyr for the Irish cause and has certainly assured him a top place in history and legend. 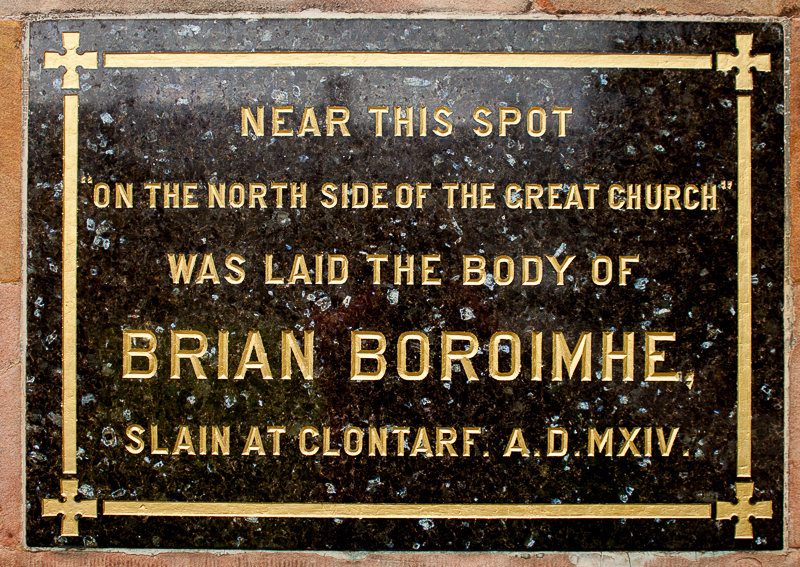 You haven’t mentioned any legends.

To be honest the whole Brian Boru story was once considered to be a complete legend. No archaeological remains have ever been found of the battle; its site is disputed; and no-one knows exactly where Brian Boru has been buried – although there are various stories about all this which are still told in good faith after 1,000 years.

Didn’t he play the harp?

Well ‘the Harp that once through Tara’s Hall the soul of music shed’ was supposedly played by King Brian. It’s kept in Trinity College Dublin – where you can also see the Book of Kells. Unfortunately it’s been dated to the 15th century and therefore could never have belonged to Brian.

The harp has been used as a national symbol by the Free State but is perhaps most familiar in its incarnation on Guiness bottle labels. It has a chequered history itself: it was restored (very badly) and played for a time on special occasions but is now considered too fragile to allow the wire strings to be fully tensioned. In March 1969 it was stolen! 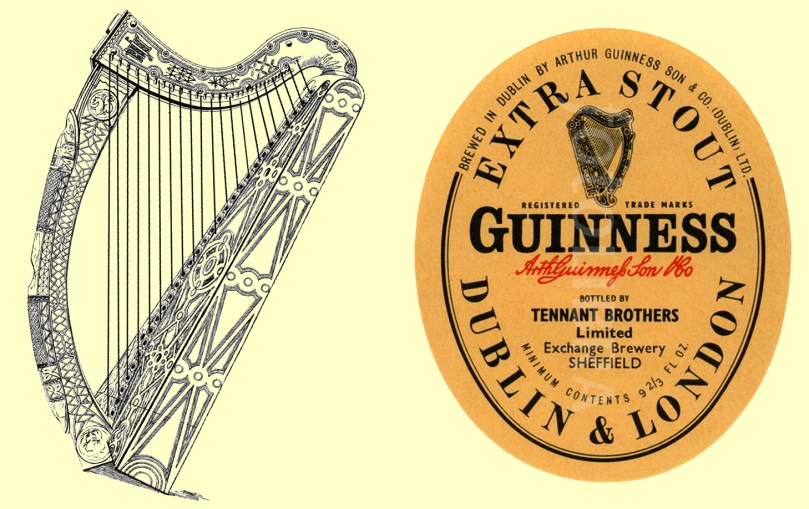 Oh no! Did it come back?

Yes: after some very cloak-and-dagger antics involving large sums of ransom money being left in a dustbin in a Dublin back street it was eventually found wrapped in a sack in a sandpit.

Did they catch the dastardly thief?

They did, and he was given a two year suspended sentence as his defence counsel argued that he should be allowed to flee the country or he would be lynched…

A sensible approach to matters of law!

Indeed. And we can be happy that the whole Brian Boru / Battle of Clontarf story has given rise to huge media coverage, hopefully boosting tourism in Ireland.

Why do I feel a little ‘guilty’ about being English while dwelling, for the moment, in Ireland?

This morning I shared a car ride with a friend – Irish – so I started off our conversation by voicing this feeling and pointing out my ignorance of Irish History, having learned nothing about it during my education years. The ensuing journey then consisted of me listening to an erudite and most entertaining blow-by-blow account… Remember Aenghus, the Red Bard? It was as though he was sitting in the car with me, recounting the history lessons of his seven year apprenticeship in the Bardic School at Dumnea. 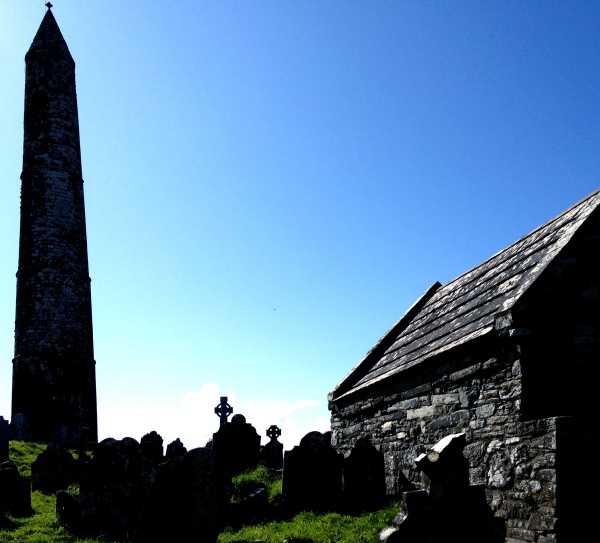 Round towers helped to defend against Danish raids

My personal induction began with the Danes. I hadn’t understood, before, that there had been a ‘special relationship’ between Ireland and Denmark, based on trade and education. This had started in the so called Dark Ages and flourished until the time of the High King Brian Boru (c941 – 1014). I already knew about him – in connection with a harp: the Brian Boru Harp sits in Trinity College, Dublin, along with the Book of Kells. Oh – and a traditional tune: Brian Boru’s March. The relationship became an invasion, and the Danes were despatched by a rare coming together – under Brian Boru – of tribal kingdoms, who afterwards reverted to their more usual squabbles.

Now we come to the time of the Normans – well established in England by the 12th Century – and the only English Pope: Adrian IV – who in 1155 issued a Papal Bull to Henry II of England giving him authority to invade Ireland in order to rein in the dissident church there, who were not toeing the line with Rome on a number of matters. This coincided with a feud between a petty King of Connacht – Tiernan O’Rourke – and Dermot MacMurrough, the King of Leinster. O’Rourke’s wife Derbforghaill was abducted by MacMurrough (but evidently at her own instigation, and during which, while being carried off, she provided realistic and convincing screams). MacMurrough had to flee to Wales from where he beseeched the English King to mobilise the Bull and invade Ireland. This actually suited Henry’s empire building ambitions quite well and he dispatched Strongbow (no – not the cider but the Earl of Pembroke, Richard de Clare) and the result of all this was that the Normans arrived in Ireland – where their descendants have caused disruption ever since. Of course – it’s by no means that simple, and this strand of the story will have to be amplified in a future post….

Confused? Well – I haven’t even mentioned Cromwell or William of Orange yet! But perhaps that’s better left until another time… And where does West Cork fit into this jigsaw puzzle? It seems that it was so far away from Dublin and Cork that it didn’t feel the ripples of what was going on for a long time, and local politics were largely sorted out between the O’Driscolls and the O’Mahonys (descended directly from Brian Boru) who built a line of castles along the coast and did very nicely out of charging dues from the Spanish and Portuguese fishermen who reaped an abundant harvest from the seas of those days. And – perhaps surprisingly – the clans built up a reputation for scholarship and knowledge of the arts and sciences. Just around the corner from Ard Glas is an actively disintegrating stone ruin, a single teetering wall: this was the home of the famous ‘Scholar Prince’ Finian O’Mahon, Chief of Rosbrin who lived in the late 15th Century and who was described then as one of the most learned men of his time – not just in Ireland but Europe and beyond. Across the water and central to our view is Kilcoe Castle – formerly an O’Driscoll stronghold: some years ago it was superbly restored and is now the home of actor Jeremy Irons. In order to prevent the ingress of damp (which seems to have been an essential feature of castle life in the Middle Ages), he has treated the walls with an external render which glows yellow, orange and gold as the sun moves round. It is visually prominent in the land and seascape, and this was no doubt an essential element of all the castles in those days when Kings and clansmen had to project their status in order to shore up their often precarious positions in society.