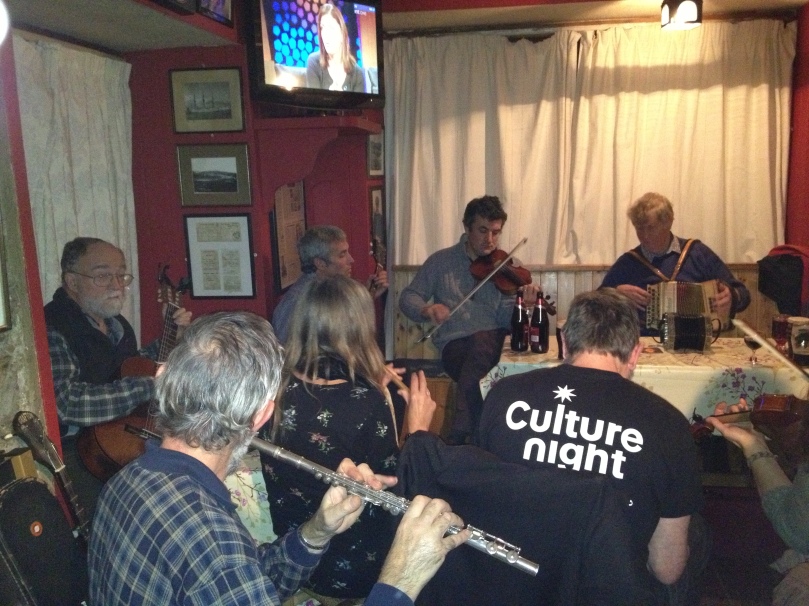 This is written from the perspective of one who sits in on music sessions (or ‘Seshunes’) and attempts to find some commonality in repertoire with the other musicians. Usually, there is no commonality: every session has its own pool of tunes with which the regulars are familiar – I hide in a corner and play along, very approximately and as quietly as possible until I achieve a semblance of the relevant melody, by which time the moment has passed and the tune has changed to something else. It’s a struggle, but the experience of making music with a whole crowd of enthusiasts is a good one.

We first sat in at Levis’s (local opinion seems to differ as to whether this is pronounced as Leeviss or Levviss – or even Leevies) and admired the aesthetic: 1950’s decor and accoutrements. The bar was very much one room of a private house – and a trip to the loo meant going into the domestic quarters of that house. About ten musicians sat around in a circle and took up most of the available space; some bar stools provided a little room for spectators.

There were a few ageing and fascinating paintings and photographs on the back wall – many with political connections – and a little grocery section to the side where, in the daytime, one could purchase cornflakes and other necessities of life. The bar was manned by a niece of the two Miss Levis’s who had presided over the establishment well into their nineties. The Music itself was traditional, and mainly Irish. Instruments spotted included fiddles, guitars, flutes and whistles. The pace was fast and the hour late. Proceedings commenced at a theoretical 9.30pm – actually closer to ten. We were not there for the finish: we had a bed to go to.

Last night I played my first note at the Ballydehob Seshunes. The venue was Vincent Coughlan’s – a more robust setting with ample space and a roaring stove. Also a television set, which remained on throughout the due process, although the sound was muted while The Music was played. This time there were more players and banjos and squeeze boxes added to the melee – including my own melodeon and concertina. I produced many wrong notes, but I coped. I have always felt shy and reticent about playing Irish traditional music in Ireland, as I am not Irish. But perhaps I needn’t worry: a brief headcount showed that of the musicians there last night eight percent (one person) were Irish, another eight percent were German, and the remaining majority was English! But music is after all a universal language – and we are all Europeans….