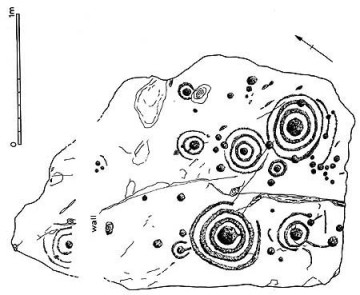 This week we are writing about the same topic – each from our own perspective.

One of our reasons for choosing this area to live was for me to re-engage with Irish rock art. I am incredibly lucky in that this is a subject that Robert, an architect by profession, finds as interesting as I do, so it has become a joint project.  As background, in 1973 I completed a Master’s thesis at University College Cork on the ‘Rock Art of Cork and Kerry’. I was 23, and I conducted my field work for two summers on a Honda 50 motorcycle belonging to my brother, Hugo.

What IS rock art? Glad you asked!

Can you see the carvings?

About 5000 years ago, Ireland was populated by early farmers. This era was known as the Neolithic (new stone age) period, and it was characterised by the emergence of a settled, or partially settled, way of life growing crops and herding animals. No longer nomadic and with a secure food source, Neolithic people developed a stratified society in which a noble or priestly class was able to commandeer the labour of large numbers of people to build great stone monuments featuring intricate carvings and often oriented to celestial occasions such as a solstice sunrise. Another tradition arose of carving on rocks – boulders or outcrops – not associated with monuments and with a different set of motifs. This tradition of rock art stretched along the Atlantic Coast, from Spain to Norway, with many fine examples in Ireland. When I undertook my research in the early 70s, it was thought that most Irish rock art was concentrated in Cork and Kerry (the two most south-westerly counties) but since then there have been major finds in Wicklow, Carlow, Louth, Donegal and elsewhere.

So how, 40 years later, does one ‘re-engage’ with this fascinating topic? Well first, we’ve a lot of reading to do, to catch up with the state of current knowledge. Second, we need to re-visit the sites I recorded in the 70’s, as well as those discovered since then. Third, we have to connect with the Archaeologists at UCC to discuss the nature of our project. All of these steps are under way, and we will be charting our progress occasionally through this blog.

The same rock as recorded by Finola in 1973