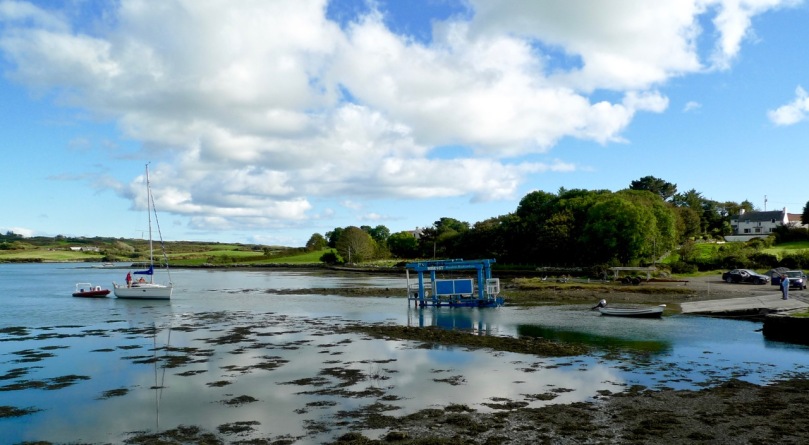 As you all know, boys can’t resist toys, especially radio-controlled ones. Sorry if this sounds sexist – I’m quite sure that there are many girls out there who like them as well. But, when it comes to Boys’ Toys nothing can quite compare to the piece of equipment which we have just down the boreen in Rossbrin Cove…

Up here in Nead an Iolair we are well placed to keep an eye on all the nautical coming and going in and out of the Cove through the spring and summer, and extending into the autumn. There is considerable activity because, at the end of the Cove, is Jimmy Murphy’s boatyard – and that’s where many of the boats that ply the waters of Roaringwater Bay during the sailing season are ‘laid up’ during the winter months. Just occasionally we have seen a single boat riding out – and surviving – the January gales afloat, but that’s not to be recommended. Far better to be safe and sound out of the water – and out of harm’s way – in the security of the yard.

Rossbrin Cove – the viewpoint from the terrace of Nead an Iolair: the main October activity is bringing the boats into the yard for winter storage

So, what’s the boys toy? Well, if you are technically minded, the full description is a Wise 16T immersible slipway boat hoist. This may or may not fill you full of excitement with the heart beating a little faster than usual but, let me assure you, it’s a fine sight to behold when it’s doing its stuff. I had the opportunity to behold it yesterday when I looked down from our terrace and noticed a sailing boat (with sails furled) making its way through to the far end of the Cove, where the boatyard is situated. That’s a sure sign that the Wise 16T is coming out and is on its way down to the slipway. Not wanting to miss a good photo opportunity (it was a beautiful October day), down I went as well! 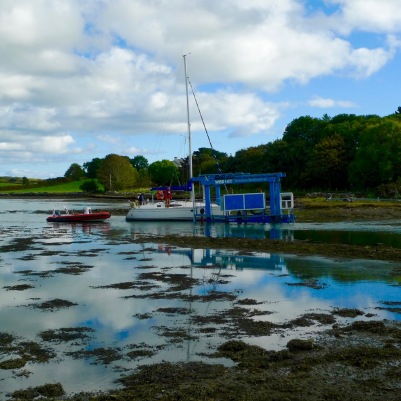 Header picture – the Shaughraun approaching its winter quarters. Above left – expert navigation: the Shaughraun entering the boat hoist; above right – the slings are tightened to secure the boat ready for its journey up the slipway

I suppose what makes the Wise 16T such a compelling draw for this boy is the sheer size of it, and the fact that the whole contraption is controlled from a little box hanging around Jim Murphy’s neck: he doesn’t even have to be on board to operate it! For me it somehow brings back memories of travelling by steam train in the days of my distant youth when I always made sure I got to see the driver and the fireman on the footplate handling the huge monster that was the hissing, thundering locomotive (I did achieve my dream of travelling on the footplate once, but that’s a completely different story). Rather, though, the Wise 16T is probably more akin to my youthful aspiration to be in charge of a radio controlled model plane and to be able to make it loop, dive and spin spectacularly, thereby thrilling the admiring crowds. Sadly, this aspiration was never fulfilled. All the more reason, therefore, to hurry down to the water and catch a glimpse of the Wise 16T in action.

The boat hoist looks a bit like a giant insect, albeit having only four legs. At the end of each leg is a wheel, and each wheel is turned – and steered – by hydraulics powered by a diesel engine mounted high up in the frame of the hoist: this is to keep the engine above water while the main body of the lift is immersed as it negotiates the slipway. Hydraulics also operate the slings which secure the boat once it has been expertly navigated into the lift. All this can be done by the remote radio controller, although there is also a driving position on the structure itself – again, mounted high enough to be out of the water. 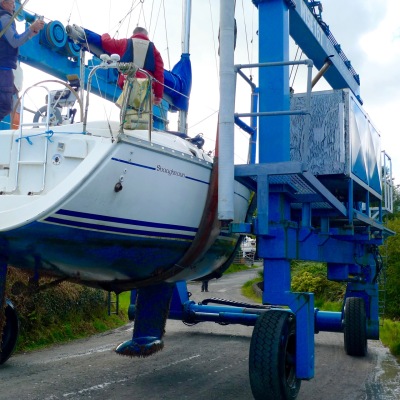 Top left – the driving wheels (it’s all done by hydraulics); top right – the diesel engine casing can be seen mounted high up in the frame to avoid immersion. Above – Jim steers the machine up the slipway using a radio controller

I was able to closely observe the whole operation: the boat (the Shaughraun) approaching the immersed lift, being secured by the slings, then raised clear of the water as the Wise 16T climbed up the slipway; the crew were still on board. The boatyard is a little way from the slip and along one of Rossbrin’s narrow lanes, so I was able to see how Jim – walking in front – expertly drives the whole ensemble using his little remote box. There was quite a lot of activity on the water on the day, with small boats being pulled out and mounted on trailers, and soon there was a bit of a traffic snarl-up on the lane with the small boats following along behind the big ‘insect’ going – understandably – at a slow pace as it made its way round bends and past overhanging trees and bushes. 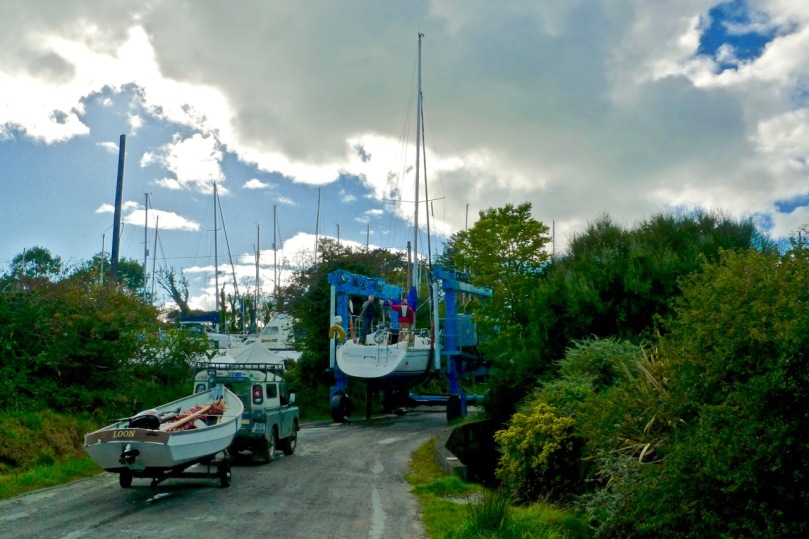 Top – West Cork traffic jam! Below – safely entering the gates of Rossbrin Boatyard, and ready to settle in for the winter

However much of a hold-up it might have been to the traffic following behind (and it was barely a couple of minutes) the delay must have been more than outweighed by the sheer spectacle of the machine in action. I was delighted to have seen the Wise 16T from a close vantage point. Many thanks to Jimmy Murphy, Rossbrin Boatyard Ltd and the crew of the Shaughraun for allowing me to share the experience.