With the West Cork History Festival just around the corner (this coming weekend – July 28 to 30: hurry! – there are still some tickets left for a whole host of compelling events), I thought I would concentrate today on a little piece of very local history which has fascinated me for some time.

Header picture: looking down Staball Hill to the colourful and thriving community of Ballydehob in West Cork; above – Chapel Lane, just on the edge of town: a haven for wildflowers with – lower picture – the intriguing sign Lacha Bhuí

Mounted beside the road on Chapel Hill in Ballydehob is a slate plaque, which is inscribed Lacha Bhuí. I asked Finola to translate the Irish for me: it says Yellow Duck! Intrigued, I asked around to see if anyone knew why there should be such a sign in this place; eventually, I was transported back to 1642… 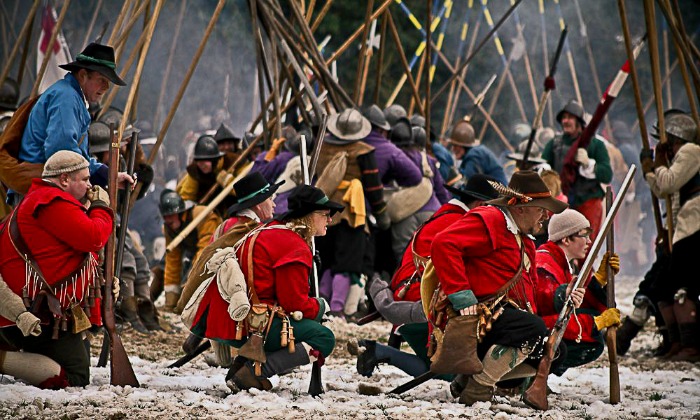 Reenactment of the 1642 Battle of Stratton, in Cornwall: it’s not Ballydehob, but perhaps it portrays something of the atmosphere of the skirmish that took place here in the same year

My principle informant is Noel Coakley – a local historian and a mine of information. He it was who told me the story of a battle that took place in Ballydehob, on Staball Hill in 1642. He couldn’t remember where he had the information from but this is the account he gave me:

…In the days of the old Clan system, the McCarthys and the O’Mahonys held sway in this area and a string of castles bears testimony to their strength and dominance. In 1602, an army, led by Sir George Carew, the English President of Munster, descended on the area and were successful in breaking the power of the gaelic Chieftains.

The arrival of the sixteen hundreds saw an influx of settlers, mainly from England, but a significant number were protestants fleeing persecution from Catholic France.

A powerful family named Swanton, from Norfolk in England, came and succeeded in subjecting much of the area to themselves and even changed the name of the village to “Swantons town”. The last use of this name was in the census of 1821.

As always the natives resisted the dominance of foreigners. In those days before police forces, a garrison of twelve British soldiers attempted to uphold and enforce the law and order in Ballydehob. Robert Swanton the leader of the Swanton group, who had quite a few questionable projects to his name, and had earned for himself the nickname ‘Black-hearted Bob’, enlisted the help of the garrison to take over Ballydehob for himself. A group of six local men, who were trained to arms, issued a challenge to the garrison and Black-hearted Bob and a pitched battle was fought at Staball Hill. The year was 1642… 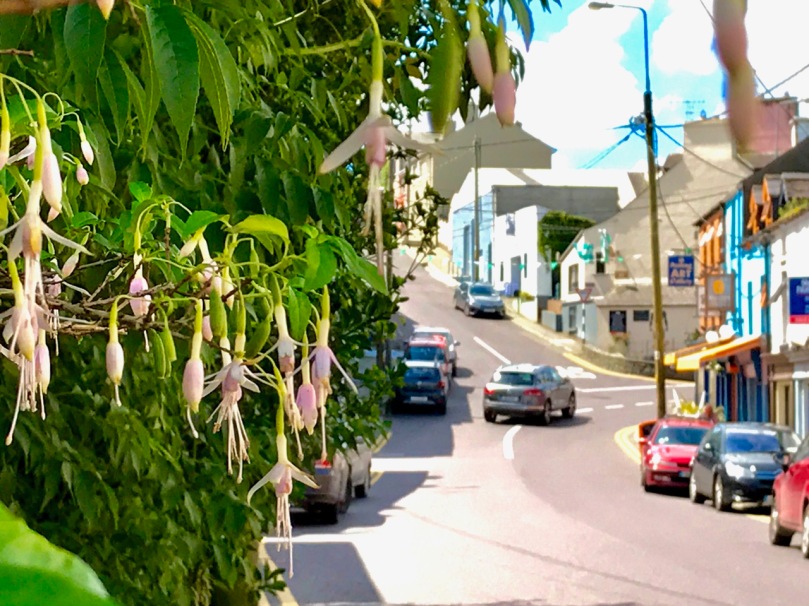 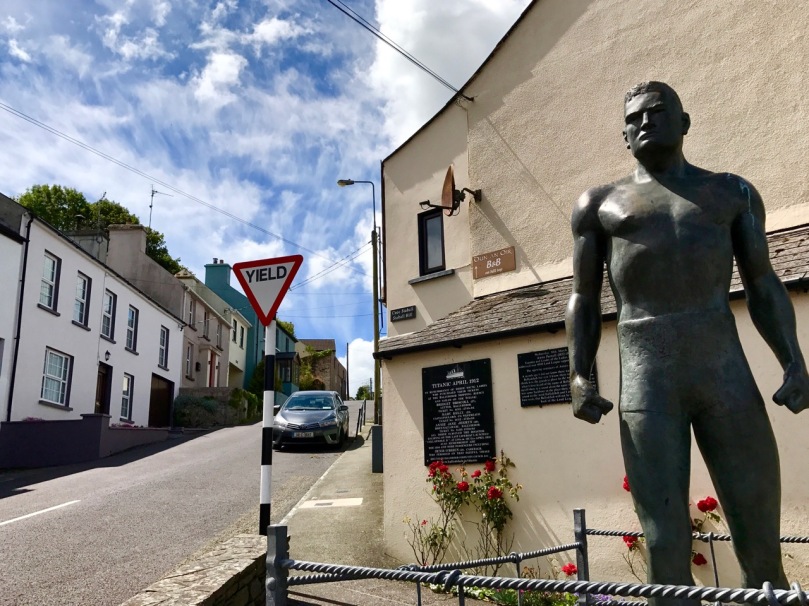 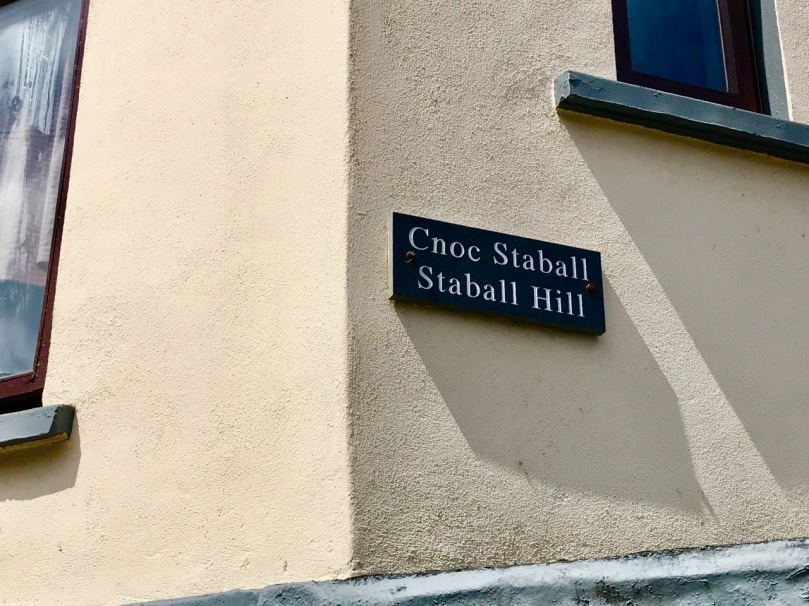 …In 1628, the first Huguenots appeared on the southwest coast, mainly in small boats, to escape detection from the French. They brought with them jewellery and other valuables which they traded with the Irish for plots of land. They were entrepreneurs and set up small industries.

One of their number Pierre Camier noticed the exploitation of the natives and took sides with the Irish defenders in the battle of Staball Hill. Black-hearted Bob took flight from the fray and Pierre Camier pursued him and caught up with him between the present St Bridget’s Church and the Garda station and there he attacked him and killed him. He came back to the fray and shouted “I’ve killed the yellow duck”.

Meanwhile the battle was going well for the Irish band. They killed all the garrison losing just one man of their own. The leader of the Irish band shouted “stab ‘em all” and it is alleged that this was how Staball Hill got its name. The term yellow duck is often applied to a coward in France and to this day the spot where ‘Black-hearted Bob’ was killed is known as ‘Lacha bhuí’ which is the gaelic for ‘yellow duck’… 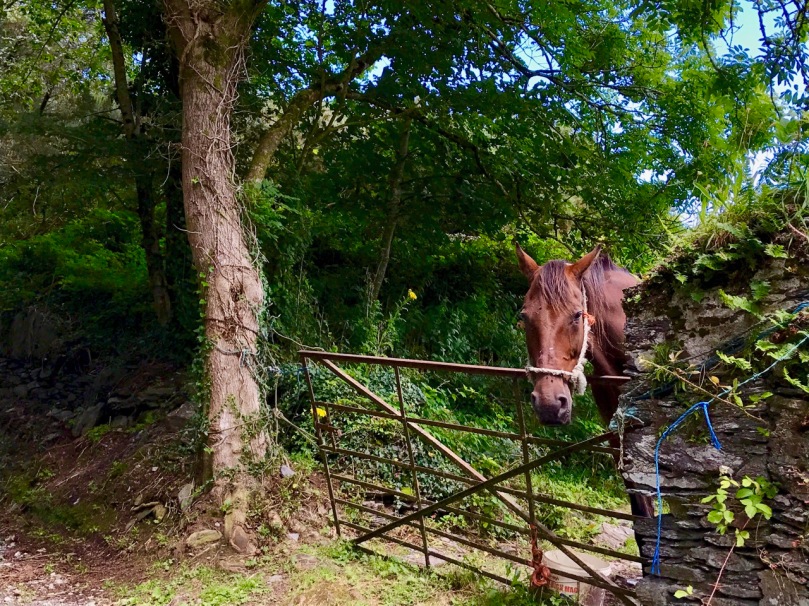 You’d never know it, but this little patch of West Cork tranquility was the very spot where Black-hearted Bob Swanton met his bloody end, at the hands of Pierre Camier

After some searching I found another account of the battle, in From West Cork Through Time by Kieran McCarthy and Daniel Breen – Amberly Publishing, UK 2013:

…The seventeenth century saw the arrival of a number of settlers, mainly from England, but many were also Protestants (Huguenots) fleeing persecution in Catholic France. The Swantons from Norfolk emerged as the most prominent family in the area and, by the late eighteenth century, they had even changed the name of Ballydehob to Swanton’s Town. A garrison of twelve British soldiers attempted to uphold the law. Robert Swanton, the leader of the group, enlisted the help of the garrison to take over Ballydehob. A group of six local men, who were trained in arms, issued a challenge to the garrison and ‘Black-hearted Bob’, and a pitched battle was fought on Staball Hill. The year was 1642…

In rural Ireland history is never far below the surface. Here in Ballydehob there are still reminders of the Huguenot and English proponents in the ‘Yellow Duck’ affair

As a little addendum I can’t resist pointing out that there is a Staball Hill in Castlebar, County Mayo. It has a story, too:

…According to folklore, Staball Hill got its name from the ‘Races of Castlebar’ during the Rebellion of 1798. General Humbert, with an army of 1000 French soldiers, landed at Killala and fought his way to Castlebar with the help of some Irish recruits where an army of British soldiers were waiting for him.  After the battle, the British contingent fled so fast that the episode became known as the ‘Races of Castlebar’ and is often described as one of the most ignominious defeats in British military history. During the battle a blockade was erected by the British in one last stand at Bridge Street.  As the Irish soldiers, armed only with pikes, charged the British the residents of the street are said to have shouted ‘Stab them all’. This was shortened to ‘Staball’.  On the Ordnance Survey Map c1900 the hill is called ‘Stab all’ – the words separated… 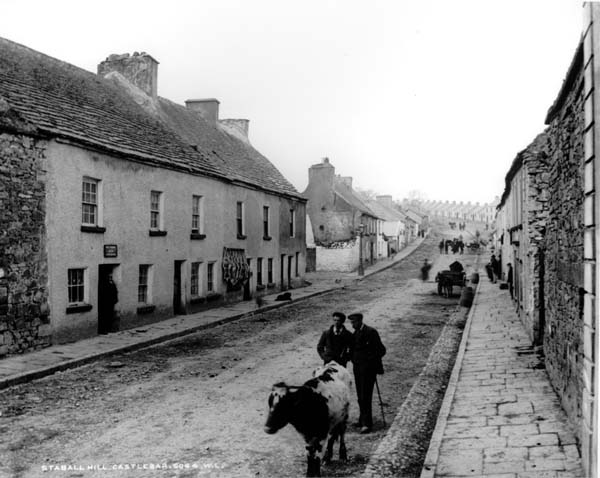