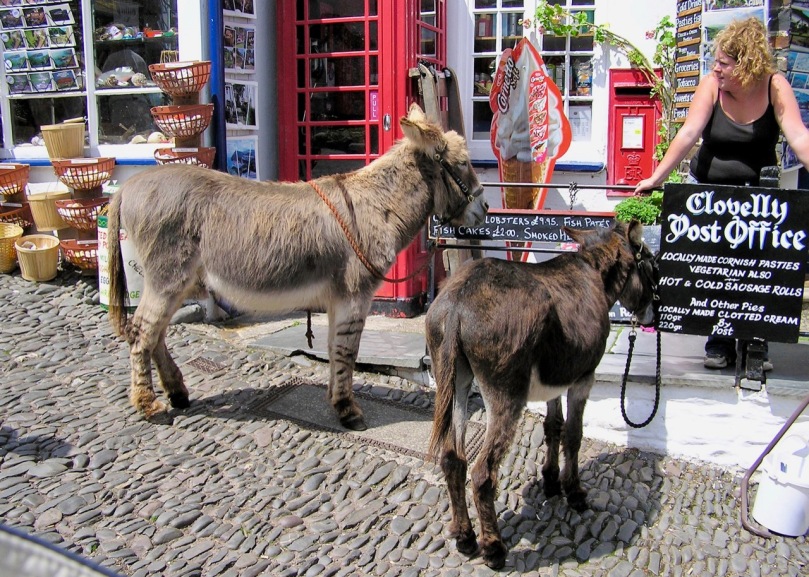 Question: what’s the connection between these rather lovely donkeys in a little North Devon (UK) village, and our own beautiful Roaringwater Bay (below)? 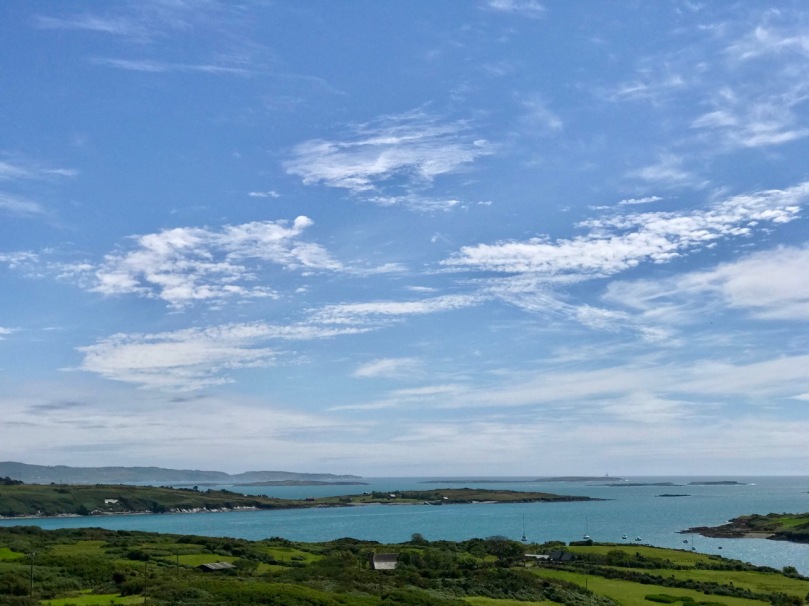 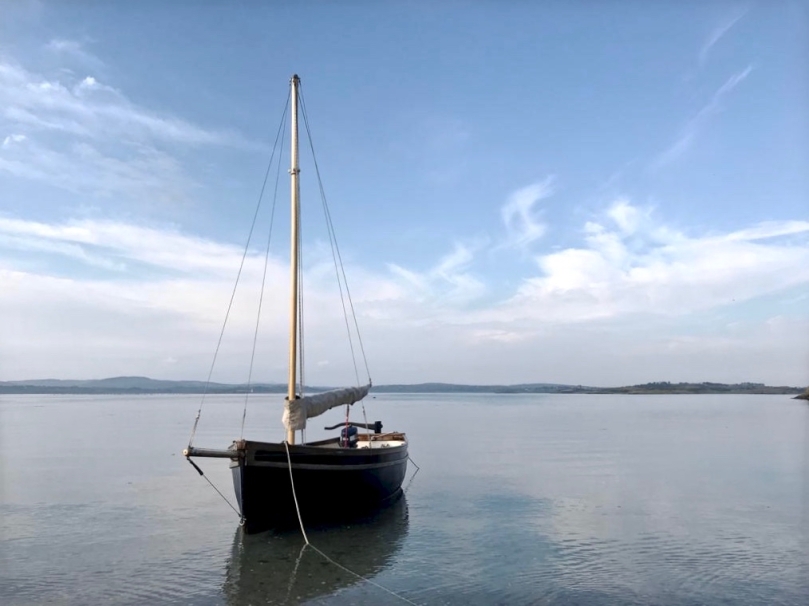 Selkie belongs to our friends and neighbours, Oliver and Susie Nares. It has a mooring at Audley Cove – just over the hill from us. It has been out of the water during the winter receiving some refurbishment and a new colour scheme (it’s shown above in last year’s livery). I was pleased to get an invitation to the launch this week, down at Rossbrin Cove. 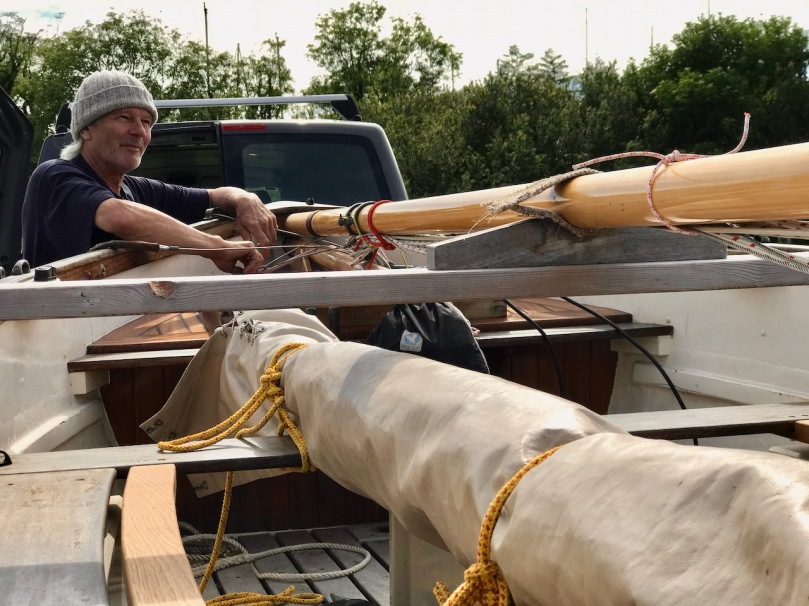 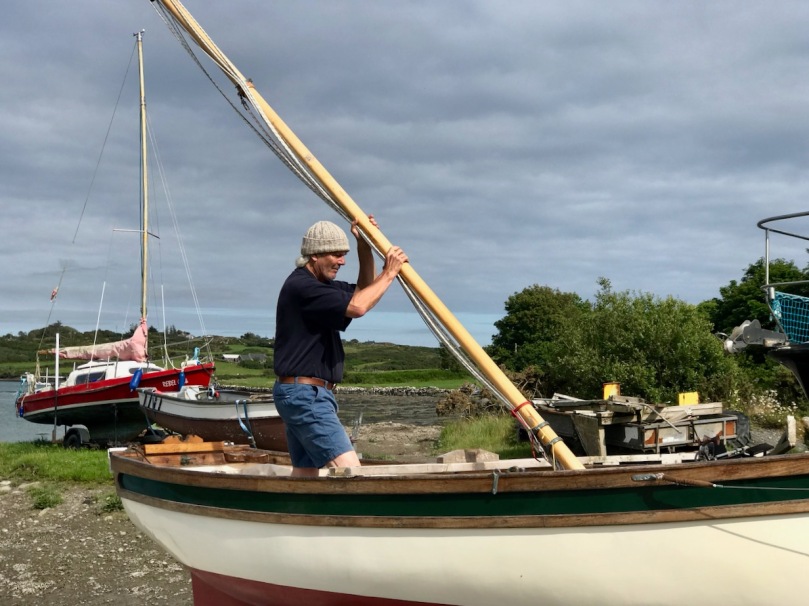 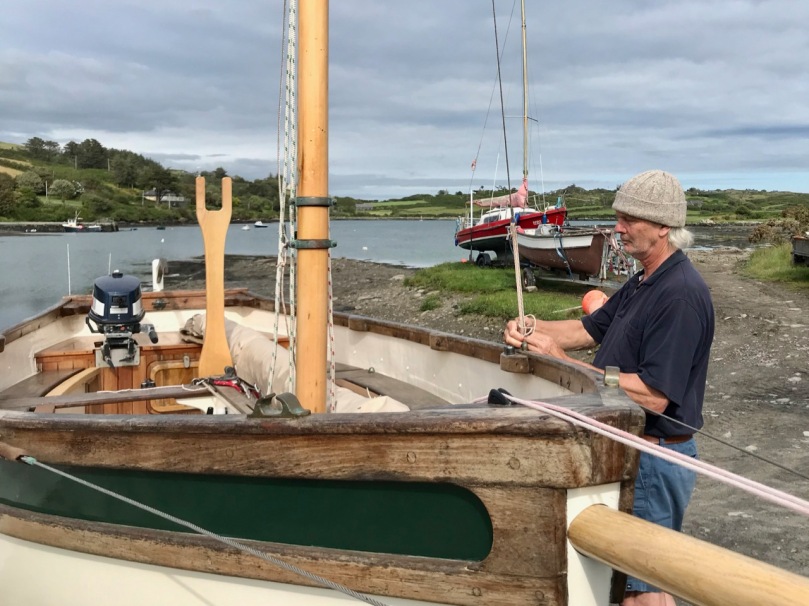 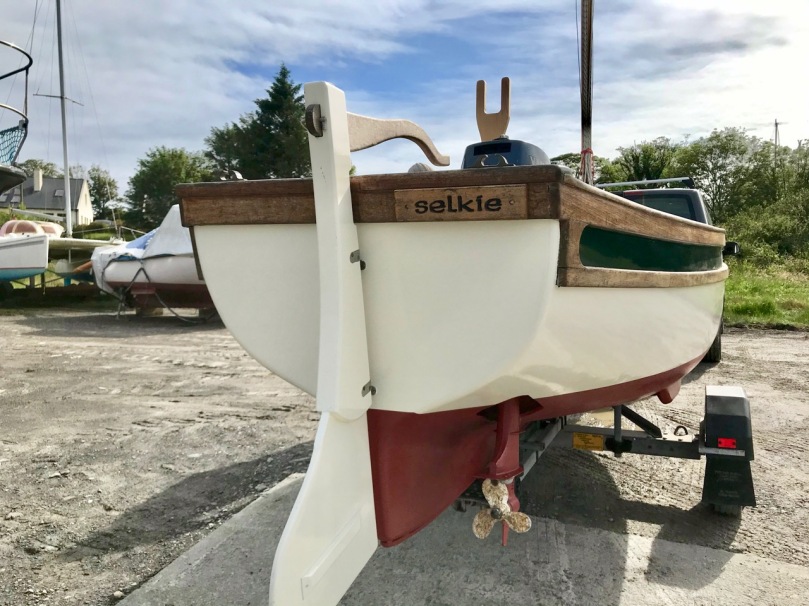 Oliver and Selkie, getting ready for the launch

A Picarooner is a small fishing boat which has a long history. The name is reportedly the corruption of a Spanish word and means ‘sea chaser’ or ‘sea robber’. These boats are now associated with the North Devon coast and, specifically, the fishing village of Clovelly, where they still bring in catches – mainly of herring – using sustainable methods. But there is a fascinating etiology legend – which they will tell you in the West Country – that they were originally the ‘cockboats’ or shore tenders carried on board the galleons of the Spanish Armada which foundered on the west coast of Ireland and the southwest coast of England in the summer of 1588 while trying to return to Spain by circumnavigating the British Isles and Ireland. These endeavours were confounded by exceptional storms and lack of local knowledge of treacherous coastlines together with the effects of a strong gulf stream pushing them off course. There were many attempted landfalls in Ireland – in County Clare, Kerry, the Blasket Islands and Valentia Island – resulting in numerous wrecks. It is logical that their cockboats, which were stored on deck, would have survived the destructions and taken on lives of their own, wandering the lonely seas until they landed up on strange shores. One such landing was at Clovelly – or so the story goes – and the local fishermen and boatbuilders there were so impressed with the construction of the craft – its size, shape and manoeuvrability – that they established their own fleet of them to seek out the enormous shoals of herring which had arrived off that coastline due to a medieval climate change bringing warmer waters. That same climate change also brought a similar influx of fish to the south west of Ireland and – particularly – to Roaringwater Bay, allowing the Gaelic chiefs here to prosper. 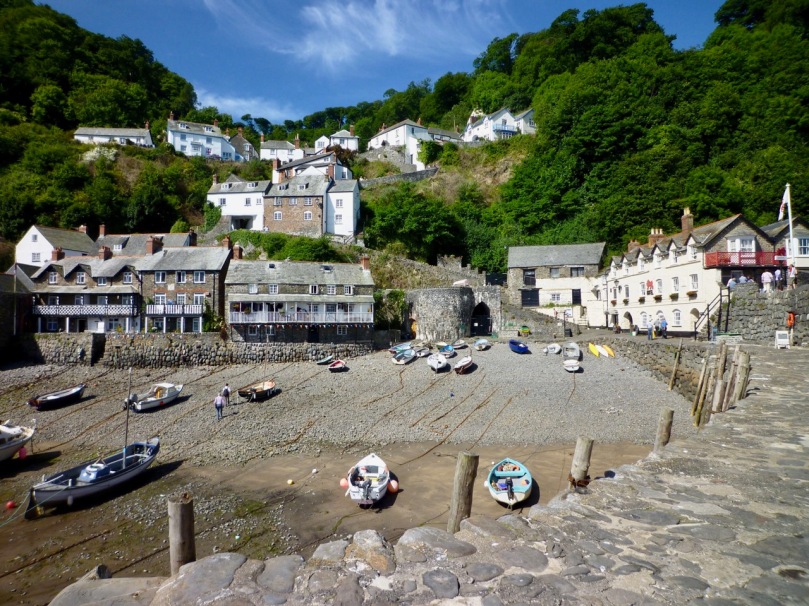 This is the fishing village of Clovelly, probably little changed from the times of the Armada and the herring bonanza. It is built into the side of a cliff and the one cobbled main street is so narrow and steep that only donkeys and pedestrians can negotiate it. I know it well, as I spent numerous years of my architectural career working on projects in the village, restoring scores of cottages, boating facilities and the two village inns. The village is owned to this day by a descendant of Zachary Hamlyn who, born to a farming family in Higher Clovelly, made his fortune as a lawyer in London and returned to purchase the whole estate for around £9,000 in 1738. 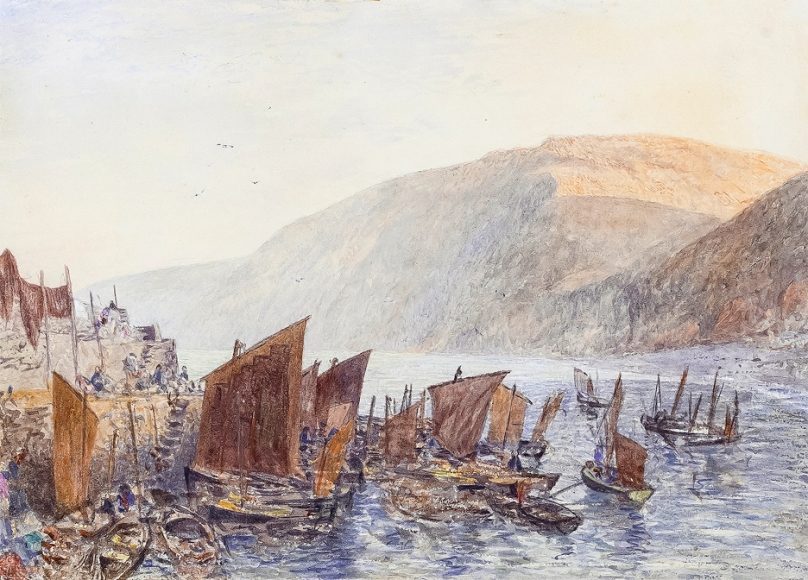 It’s very fitting that the Nares should launch their Picarooner herring boat under the shadow of Rossbrin Castle, as Finnin O’Mahony, who occupied it in the fifteenth century, became fabulously wealthy through the medieval herring and pilchard fishing industry. The O’Mahonys and their fellow Gaelic overlords levied dues on visiting fishermen from Spain, Portugal, France and England and provided victuals, barrels, salt, liquor – and fish palaces for processing the catch. 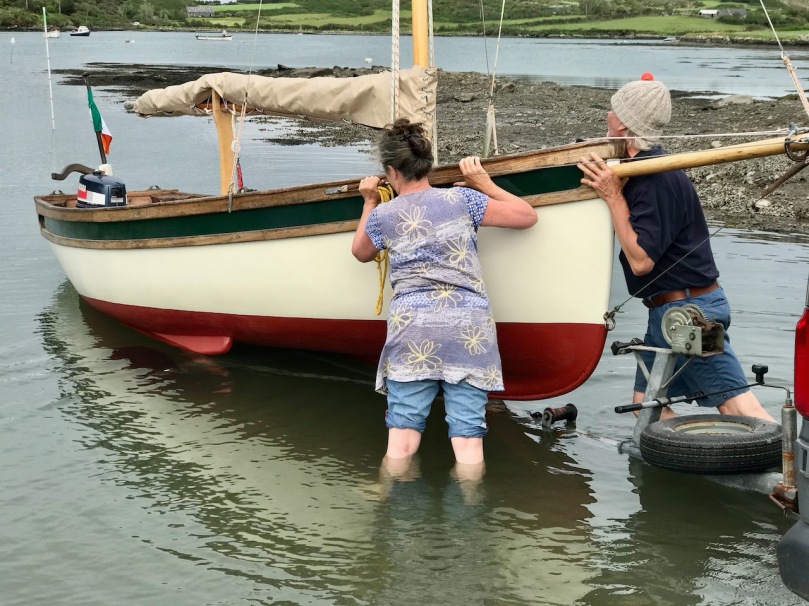 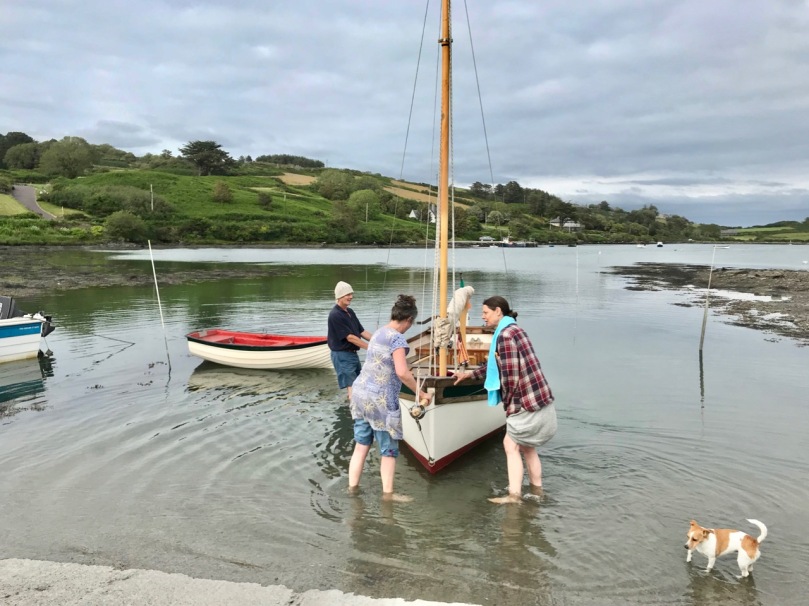 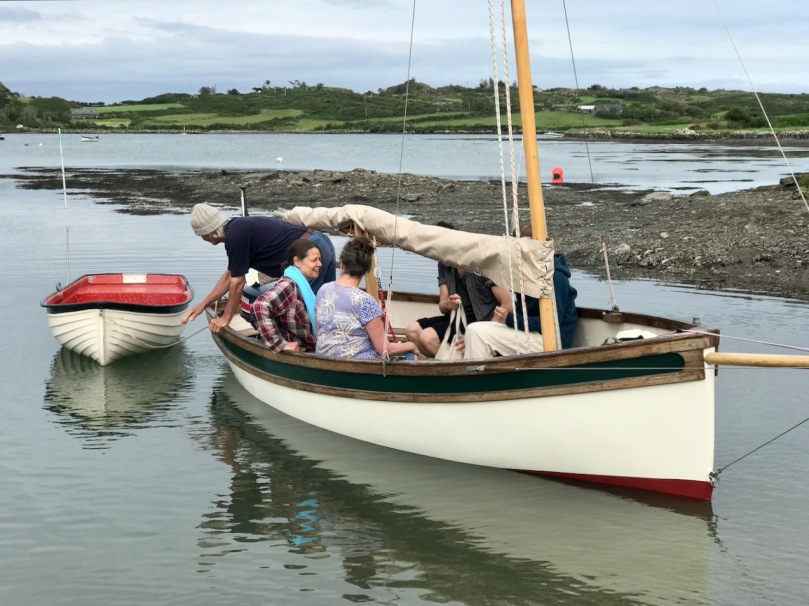 The Nares family getting their feet wet, and preparing to run back to Audley Cove. Interesting to note that the Picarooner has a ‘cockboat’ of its own!

It’s worth going back to Clovelly before finishing off this post. Here is a gem: the village Harbourmaster, Stephen Perham, giving us a first-hand account of using a Picarooner for its traditional purpose – fishing for herrings. I remember Stephen well from my Devon days.

Oliver and Susie’s boat was built by Martin Heard of Tregatreath, Mylor Bridge in Cornwall. Martin sadly passed away in 2009, but the yard still builds and maintains traditional boats. This is another connection for me as I had cousins living in nearby Perranarworthal, and spent idyllic summer holidays there in my youthful days. 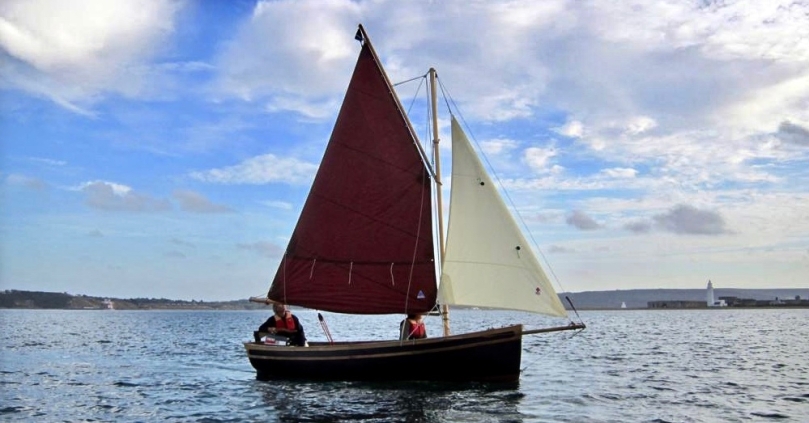 Many thanks to the Nares for inspiring this post and providing some of the material, including the view of Selkie under sail (above)