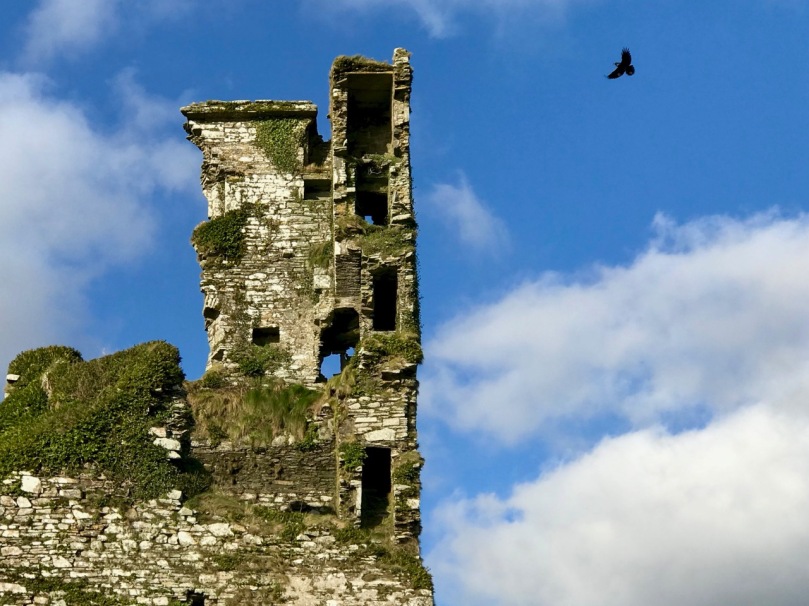 It was just Raven and I, down at Rossbrin today. We were both inspecting the O’Mahony stronghold which has stood here for, perhaps, 800 years in one form or another. Peter Somerville-Large explored the area and its history in the early 1970s:

Down beside a narrow inlet which empties at low tide stands Rosbrin, the most easterly of the O’Mahony castles. Like the O’Driscolls, the O’Mahonys had a passion for building castles: they built twelve, and six survive, all overlooking or right on the edge of the sea. They shared with the O’Driscolls one of the finest fishing grounds in Europe, controlling the waters and exacting dues from visiting fishing boats in much the same way. ‘None of the fisheries of Munster are so well known,’ wrote an observer in 1688, ‘as those of the promontory of Ivaha, whereto a great fleet of Spaniards and Portuguese go, even in the midst of winter . . .’

Neither Raven nor I would be deterred by the winter weather. On a day of hard frost followed by blue skies and sunshine, nowhere could be more beautiful than Rossbrin, and nothing could be more poignant than the quiet remoteness of this western corner of Ireland, once considered ‘the greatest centre of learning in Europe’. I walked in the company of the wisest of the corvids over the vanished ruins of a great university.

Finnin O’Mahony – Taoiseach, or chieftain, of the clan – as he may well have looked in the latter part of the fifteenth century (above): cultured, fashionable, flamboyant even, and powerful. It’s sobering to think that, while Columbus was following in the footsteps of Saint Brendan to rediscover the New World, scholars and scribes were busy on the shores of Roaringwater Bay writing and translating treatises, medical manuscripts and historical accounts of travellers busy in their quests to prove the earth may not be flat after all . . .

From an article by Alfie O’Mahony in the Skibbereen and District Historical Society Journal, Volume 6, 2010 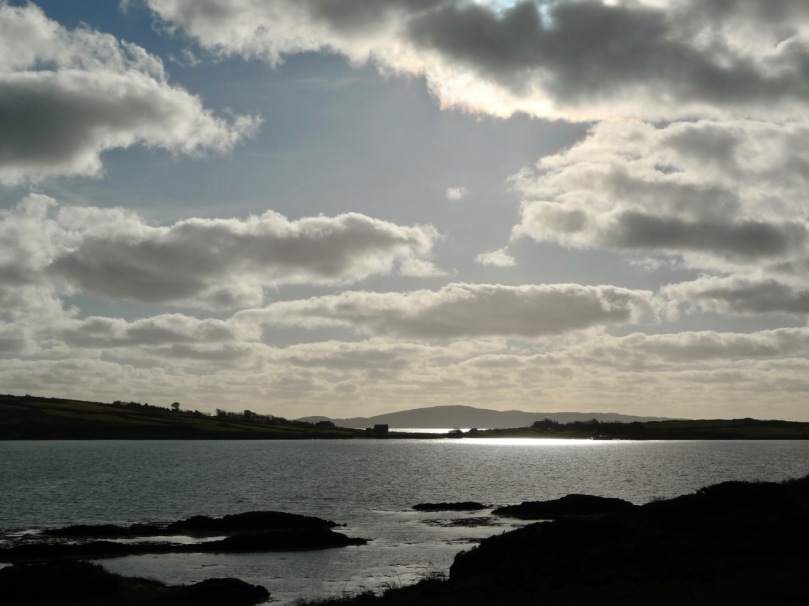 Roaringwater Bay – the view to the south, today, from Rossbrin. In the foreground is Horse Island, and beyond is the profile of Cape Clear, also a place of learning to this day: students of the Irish language spend time on the island, one of the Gaeltacht areas where Irish is still the native tongue. One of the reasons for Finghinn being so expert in languages himself was the desire to communicate with the visiting fishermen whose needs provided him and his clansmen with a good living. As well as a celebrated place of learning, Rossbrin Cove would have supplied fish palaces and all the trappings of the industry: barrels and salt for preserving, victuallers, alehouses, brothels . . . It must have been a boisterous and vibrant place. 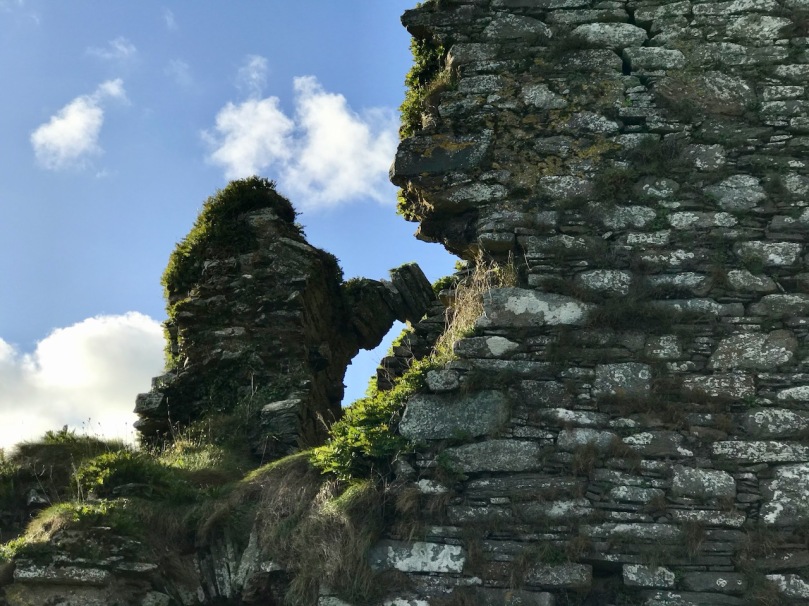 Peter Somerville-Large gives a commentary on the more recent history of the castle:

One wall of the splintered tower has a crack running down the side. Another was partly blown down by a storm in 1905. If there is another great storm like that one, Rosbrin might well disappear without trace, like the O’Mahony castles at Ballydevlin, Castle Meighan and Crookhaven. It is sited on an area which is very difficult to approach from either land or sea, standing on a rock. Contrary to what might be written in Holy Scripture, buildings on rocks have little in the way of foundation, and when they fall down or are swept away there is nothing left of them except a memory . . . 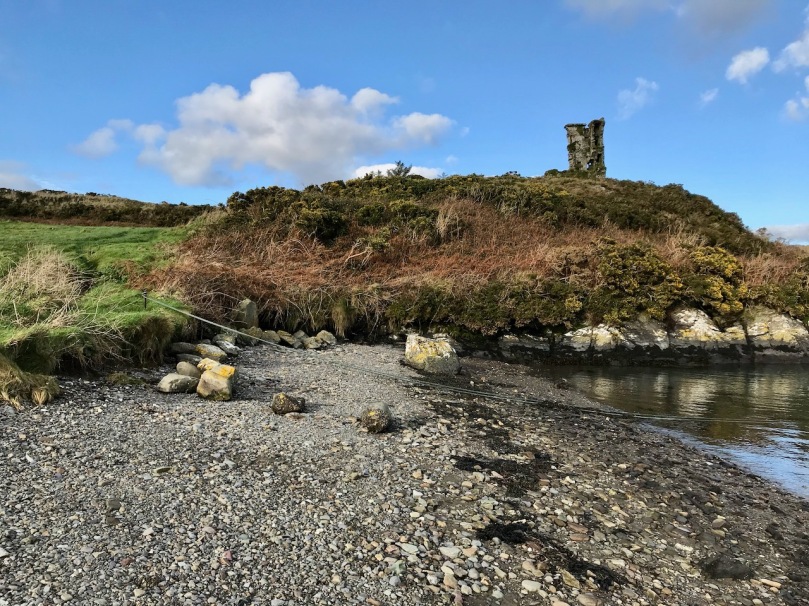 To the south of the rock on which the castle stands are the vestigial remains of an ancient stone quay (above), still in use as a landing place. The Cove itself – a natural haven – would have been the main harbour area serving the fishing fleets. The castle stands sentinel above the harbour entrance, ensuring that no-one could approach unseen.

I have been looking for older illustrations of the castle, in order to ascertain how much erosion is taking place as the years go by. Here’s a fascinating record of an O’Mahony Clan Gathering, photographed in 1975 by Michael Minihan of Skibbereen. There is a lot more of the building intact at that time. Can you see the spectators high up on the walls and roof? [Note: I was mistaken – this is actually Leamcon or Black Castle before reconstruction. I am leaving it in to illustrate what Rossbrin may have looked like before it started to fall apart.] 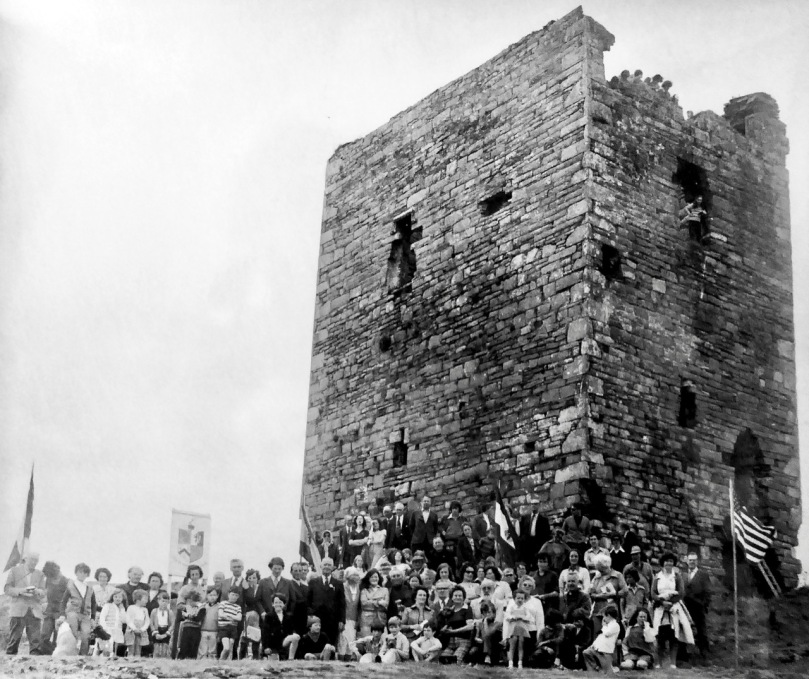 As most of you will know, we look down on Rossbrin Cove and Castle from our eyrie up at Nead an Iolair. We consider anyone living on or by the Cove a neighbour. One of these is Julian, the first to welcome us when we arrived here many years ago. On my walk today I called in on him – he lives next door to the Castle Farm. I was over the moon when he showed me a portrayal of the Castle which his mother, Geraldine, painted in the 1970s, only a year or so after the gathering at Leamcon, above. A substantial part of the Rossbrin castle walls has collapsed in relatively recent times.

Rossbrin Castle, painted by Geraldine van Hasselt in the 1970s (above). Best of all, though, is a photograph of Julian – her son – taken at Easter, 1969: significant parts of the walls have collapsed since this picture was taken. 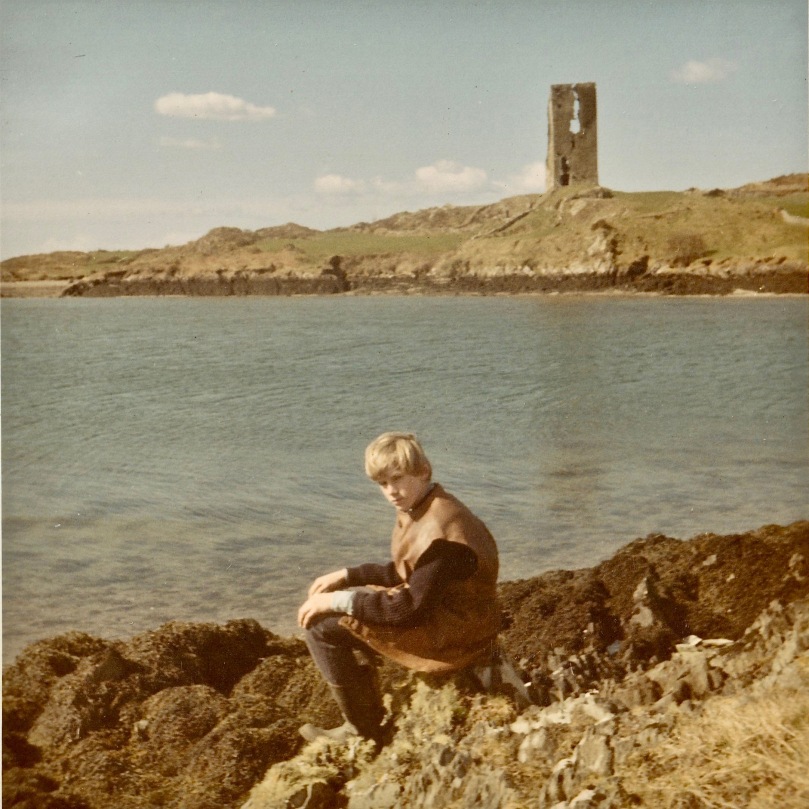 Julian van Hasselt on Rossbrin shore: behind him is a clear view of the castle. You can see the vertical crack which eventually led to the collapse of half the tower.

At this time of the year we get excellent sunsets when the weather is right. Today’s was a good one! I reluctantly said goodbye to Raven, my companion whose constant cronking seemed to follow me as I perambulated this place of deep history. I wonder: was it just Raven? Or might it have been Finghinn himself, speaking to me in yet another of his languages? I think I’ll have to return to Rossbrin to find out!

With many thanks to friends Julian and Raven . . .