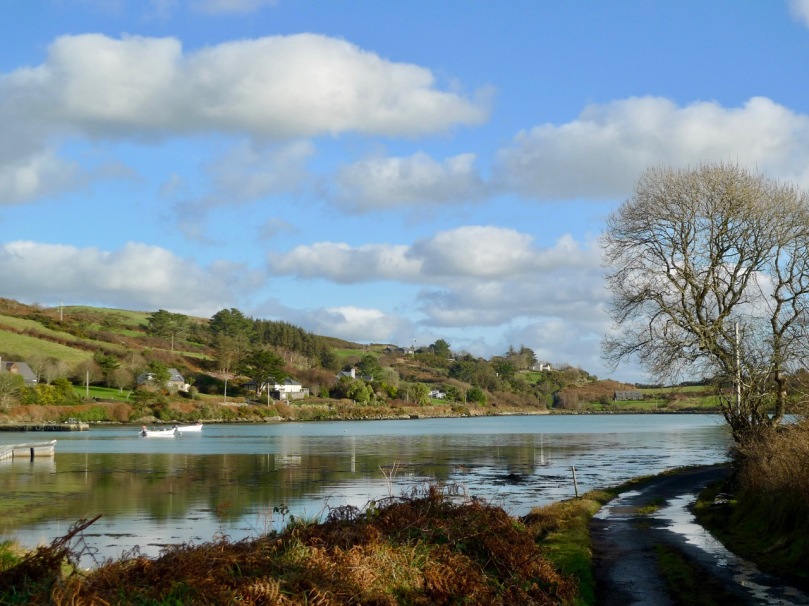 Last week we talked a little about the history of Rossbrin’s medieval castle, and the importance of this natural inlet as a historical centre of fishery, scholarship and European culture. Rossbrin Cove stills serves as an anchorage and refuge for sailing boats on the edge of Roaringwater Bay, but is now a peaceful haven, with only the sounds of the shore birds and slapping masts to lightly disturb an overriding tranquility that gives the place a very particular atmosphere. Our photograph (above) is taken on the boreen going to the castle; on the skyline in the centre is a wind turbine, and just below that is Nead an Iolair (Irish for Eagle’s Nest). The picture below shows the eagles wheeling over our house, with Rossbrin Castle and our view to the Cove beyond. 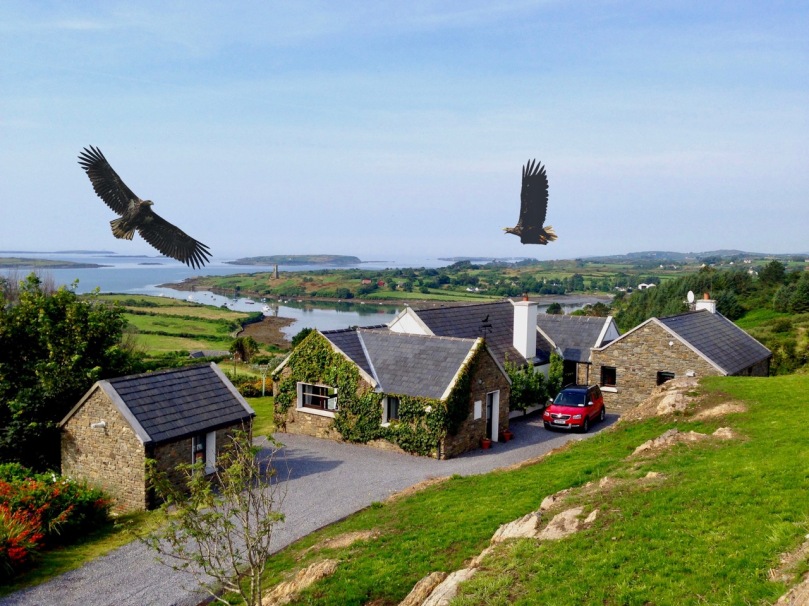 I have been exploring images of the Cove and its castle – some historic photographs and a few artists’ impressions. As it’s right on our doorstep, we have taken many pictures of Rossbrin during our years here. I am also sifting through a few of these. 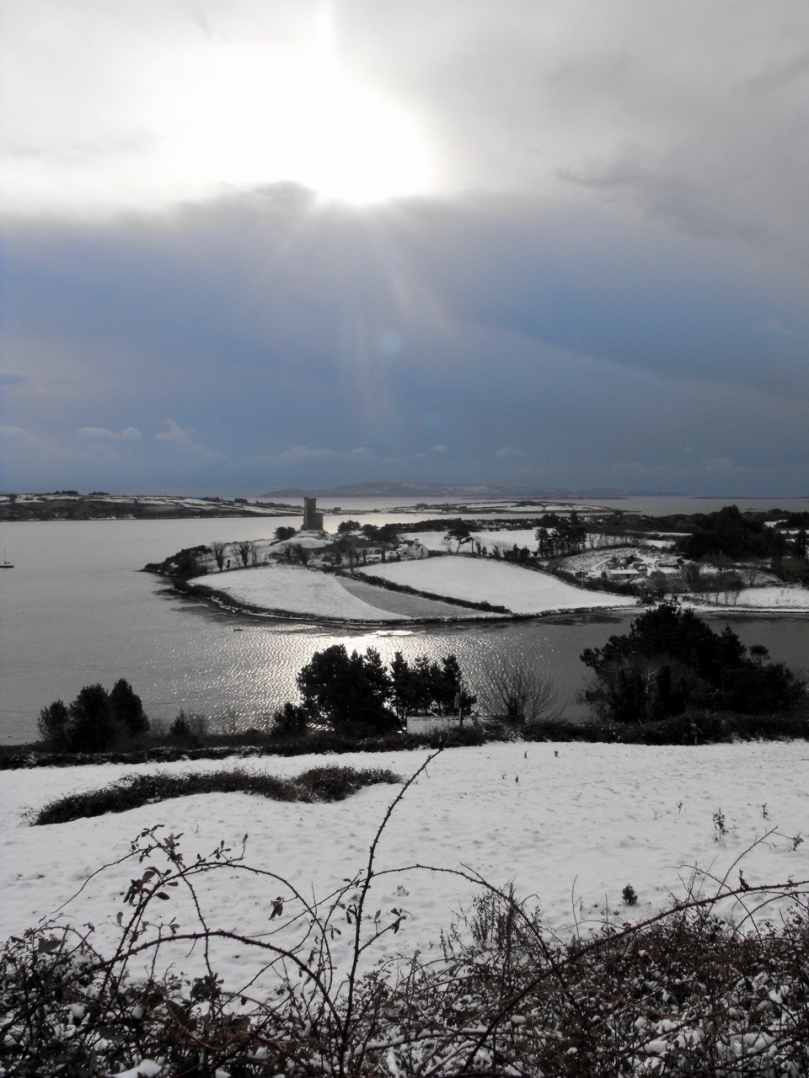 Ten years ago, the west of Ireland experienced an exceptional snowfall, and above is a photograph taken by our near neighbour, Julian van Hasselt, before we arrived. Mostly, our weather is relatively mild due to the effects of the gulf stream on the south-western coast. The castle can clearly be seen here, beyond the fields of Castle Farm. This view of our house (below) was also taken in 2010 by our neighbours Dietrich and Hildegard Eckardt: 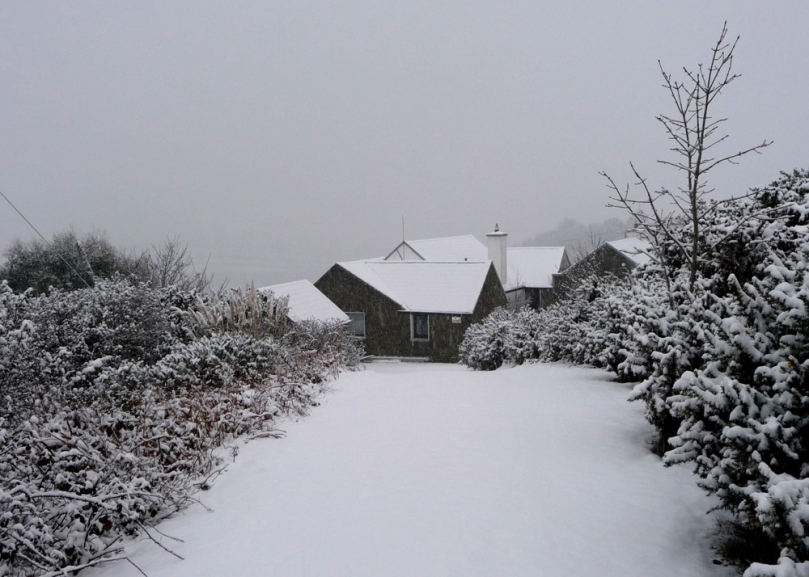 I showed a couple of early photographs of the castle last week. Here are two more taken before a substantial part of the ruined structure was toppled by a storm in the 1970s: 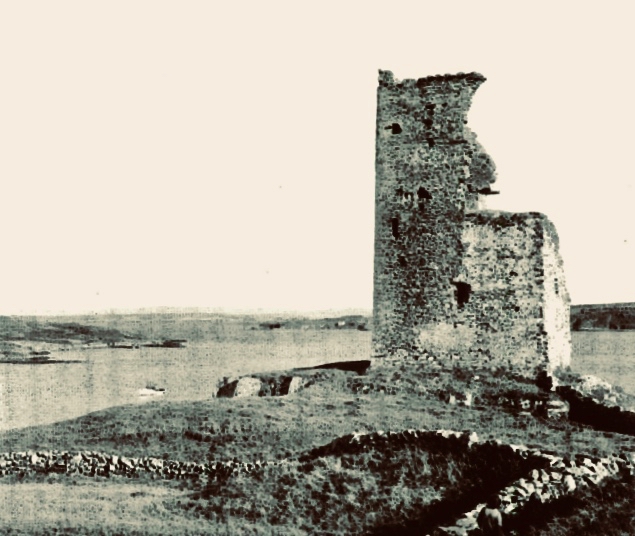 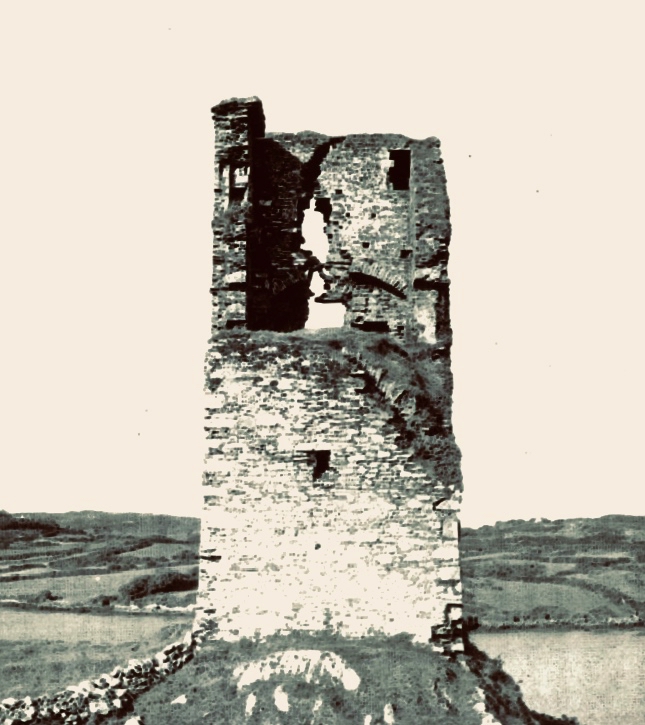 It’s good to see a bit of context, so here is another winter view of the castle on its rock with Castle Island behind. That island was also part of the O’Mahony territory. It is farmed by its present owner but no-one lives there now. You can make out the ruined castle on the island by the shore, just to the right of centre; it’s one of many that can be seen on, or close to, the shores of the Bay. 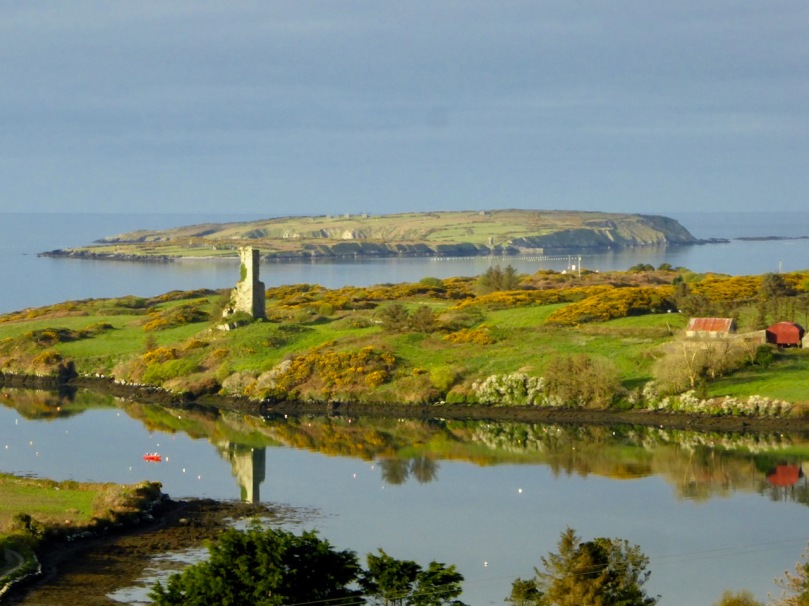 Let’s have a look at some of the art works that feature the Cove and the Castle. Jacqueline Stanley was one of many artists who was attracted to the beauty of West Cork. Now in her nineties, she moved from England to Ireland in the mid 1970s and purchased the old School House at Rossbrin as a country retreat: it has only recently changed hands.Here are two of her works, depicting Rossbrin. You can find more on her website. 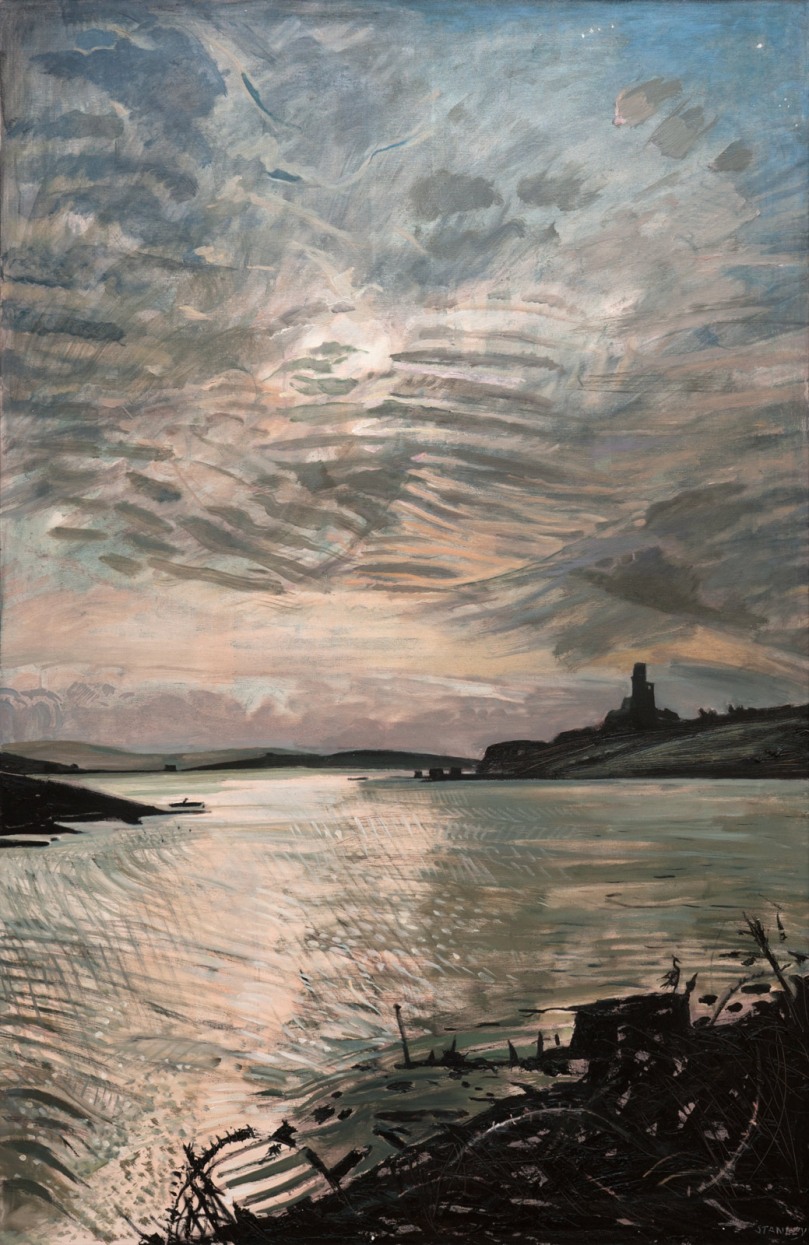 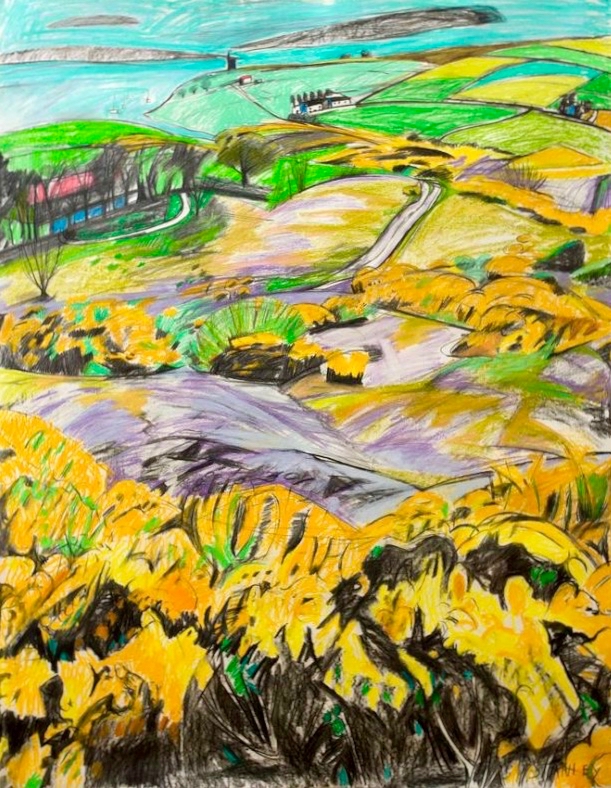 I particularly like this view (above) which was painted by Jackie from the vantage point above the high road going down to the Cove, close to the remains of the copper mine at Ballycumisk. Last week I showed a painting by Geraldine van Hasselt, Julian’s mother, also from the 1970s. Every painting or photo is a historical document – and important to retain, in view of the fragile nature of the structure today. 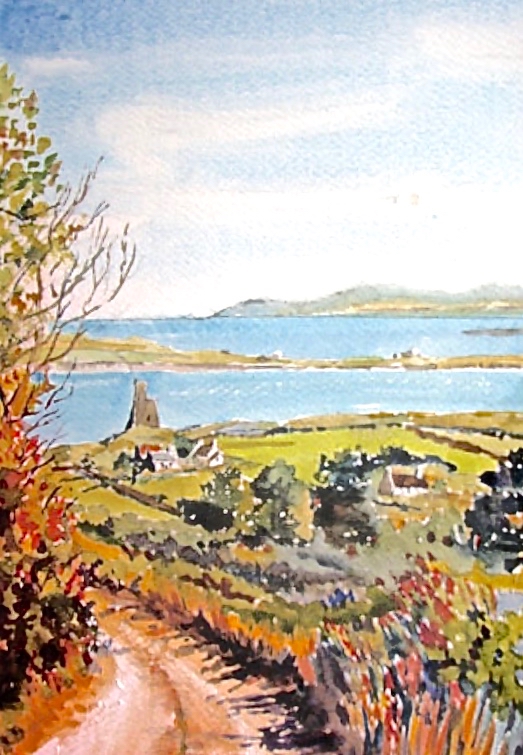 Our friend Peter Mabey is an architect and artist. He has lived in West Cork for a long time: he and I were at college together in Kingston, Surrey, and were surprised to meet each other by chance in Skibbereen market a good few years ago now. Above is one of his attractive watercolours looking down towards the Cove. The vantage point looks remarkably like the one chosen by Jackie Stanley. Below is a drawing of Rossbrin from the monumental work The Castles of County Cork by the late James N Healy, published in 1988 by Mercier: 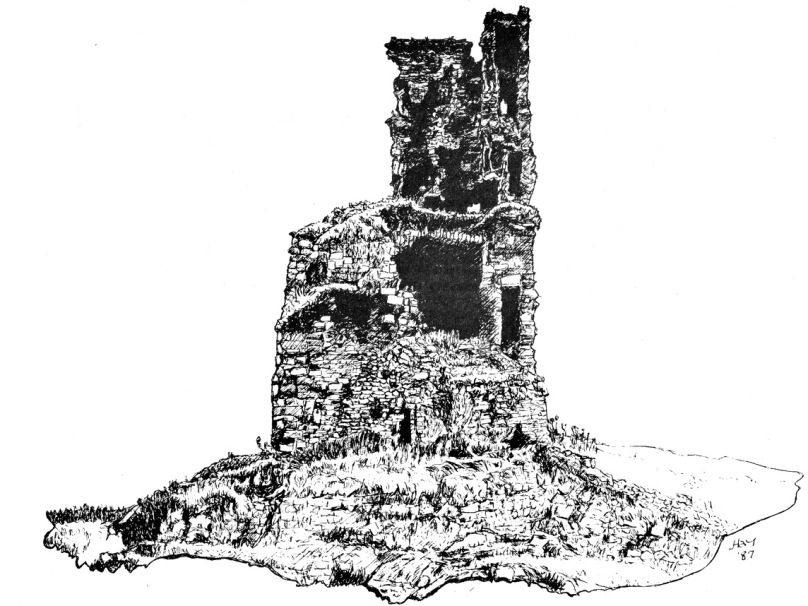 The ruin is a romantic reminder of past times, enhanced by the changing weather moods of Roaringwater Bay. This photograph, by Finola, emphasises the character of the place: 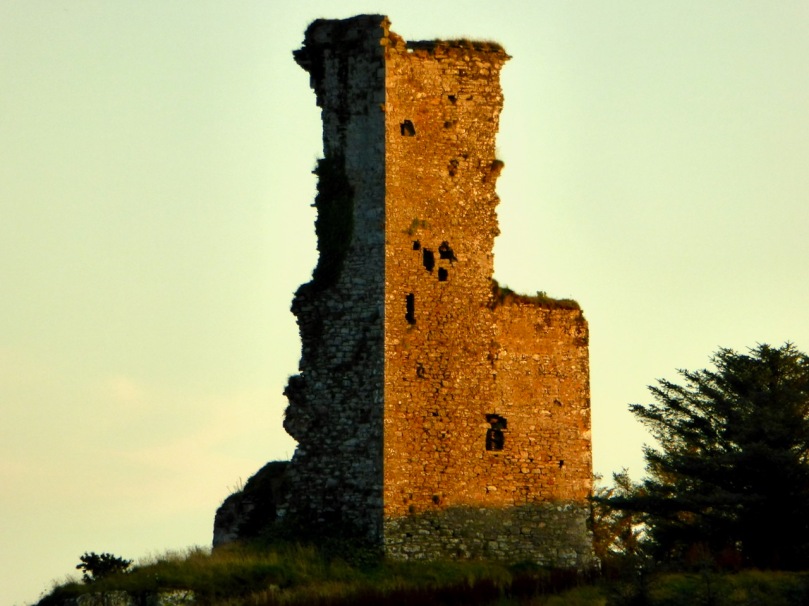 I can’t resist finishing this little two-part foray into the medieval remnants of our historically significant ‘centre of culture and learning’, which now languish on the edge of the waters below us with an artist whose work we admire: Peter Clarke, who writes and illustrates the Hikelines blog. His watercolour sketches are exquisite and always atmospheric. He has kindly allowed me to use his portrayal of Rossbrin Castle as my tailpiece. Thank you, Peter – and thank you to all the other artists who have been inspired by this remote and beautiful part of Ireland.