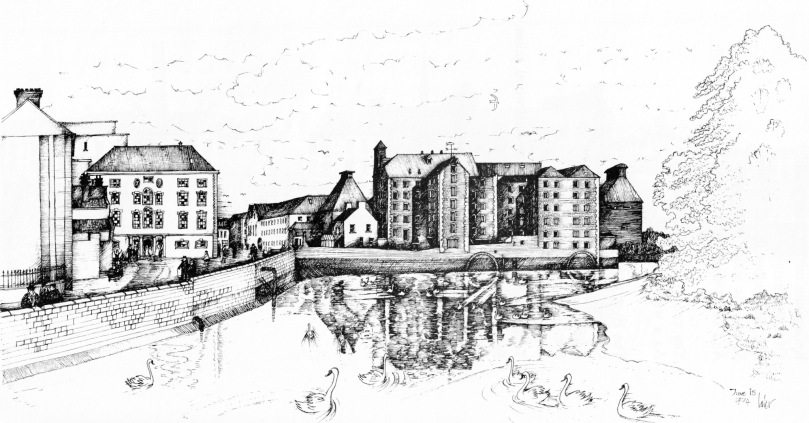 Like Brian Lalor, the poet Eiléan Ní Chuilleanáin*grew up in Cork in a house alive with art, scholarship and republican ideals, in a city yet to emerge into modernity. As a poet she returns often to the subject of Cork, immersed from childhood, as Brian, in its unique character. She has said . . . there is a poetry, and I include my own, which can only be written out of the sense of the absolute proximity of the real past, and the place which is home, from which history can be seen. 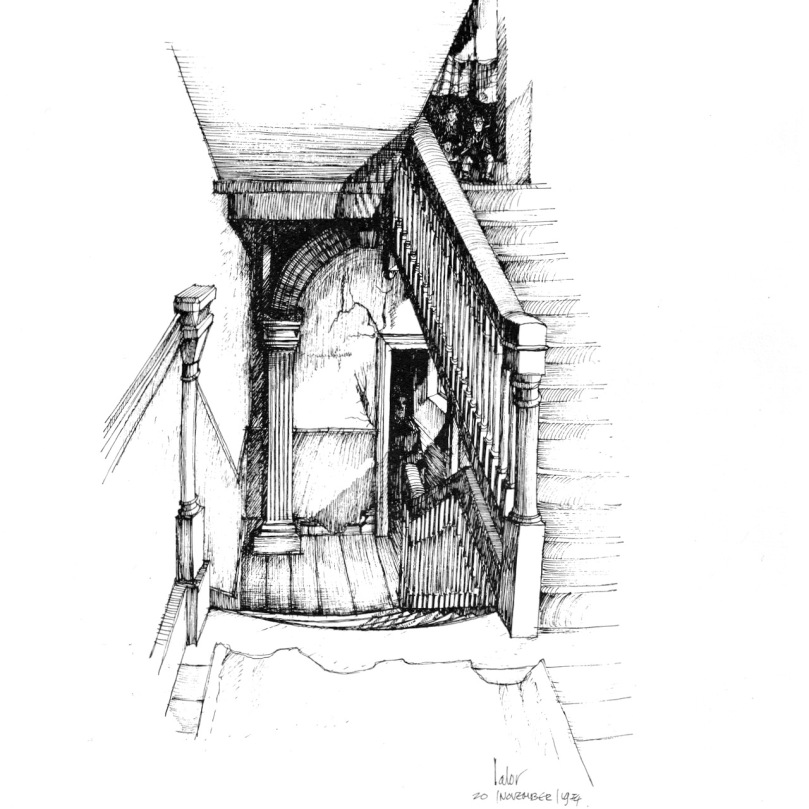 In a poem that begins ‘In the graveyards of the city’ she writes,

Tablets fixed on their boundary walls,

They are shouldered by tall square houses

Chimneys nodding to each other

Over the heads of gesturing

Angels, all back and no sex.

And we instantly see what she describes, although we hadn’t before.

In 2007 the poet and critic Thomas McCarthy wrote in the Irish University Review**:

The Gallery Press book, Cork, was certainly one of the most beautiful local books of 1977. Written to accompany Brian Lalor’s subtle, and sometimes very slight, drawings of Cork, the poems were full of a sunlit magic. The book itself, as an object, was one of Gallery Press’s finest hours. It marked a restoration of dignity to the world of Irish poetry publishing just at the moment when standards of production and presentation had begun to decline everywhere. I remember the display copies of the limited hardback of this book in the old Cork Craftsman’s Guild shop in Patrick Street: how fine it looked, how fitting it was that this volume of poems and drawings was displayed with the best ceramics and wood-cuts of the day. The opening poem is probably as complete an evocation of Cork as will ever get published:

The island, with its hooked

Clamps of bridges holding it down

Packed as tight as a ship

With a name in Greek or Russian on its tail

In a lingua franca of water –

And now the river, flat and luminous

At its fullest, images the defences:

Within are narrow lanes, man high

By the prudent stonecutters, . . .

McCarthy concludes, It is a perfect description, pencil-like and deftly matched to the delicate drawings of Lalor. The latter give Ní Chuilleanáin free rein; they allow her to soar with that light method, the elusive and evocative, and even retiring, loose line.

There are gestures at consistency. But much of the city is a haphazard succession of buildings dating from a mixture of periods, still following the medieval pattern of streets and laneways, crammed on their island site, churches, markets and houses. On the hills that surrounded the town suburbs grew up: some respectable, terraces with British Army names recalling Wellington and Waterloo, inhabited by the officers from the barracks higher up again; some grim and filthy with names like Brandy Lane, Spudtown, Cat Lane. I still remember the smell of the lanes and tenements, the public houses and their truculent customers, the shadowy shawled women making off down an entry clutching drink or money with equal desperation.

One of her poems seems to translate these thoughts from prose. As McCarthy puts it, Psychologically and socially, Ní Chuilleanáin’s Cork is a complex and evasive place, made concrete only through the most intense observation

Geometry of Guilt, the windows

Daylight sucked in and lost, a bird astray;

The knife edge of the street, blinded

Dropping to infinity, down

And the facades are curves of seeping stone

As damp as a scullery

Or a child’s game of windows and doors arranged

Matching the caves of womb and skull

I will finish with another of McCarthy’s astute assessments of Eiléan’s work: Ni Chuilleanain maintains a psychic bridge between two cranky and petulant discourses, Dublin and Cork. Her poems have become that undelivered Golden Box, forever on its way from Cork to the good Dean, a box of poems which, when opened, reveals sunlight, cloisters, avenues, water channels, and sites of ambush.

We are soft-footed and busy as dogs

The faces I meet are warped with meaning.

We turn away from each other,

Our shoulders are smooth as the plaster veils of statues

That are turning their backs in the windows and doors.

As in the previous post, Cork, Part 1: Brian Lalor, all the drawings are by Brian Lalor and reproduced here by permission of the artist.

***Home and Places, in Home/Lands, A collection of essays commissioned by the International Writing Program at The University of Iowa to mark the third New Symposium held on the island of Paros, Greece, in May 2008.