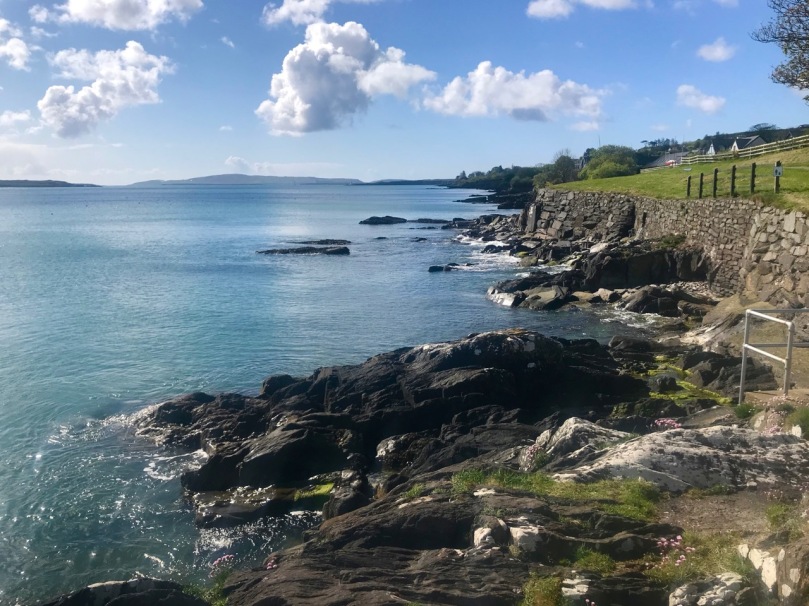 The harbour town of Schull, in West Cork, is wonderfully located on a naturally sheltered inlet looking out to Long Island Bay and ‘Carbery’s Hundred Isles’. From the pier you can take the Foreshore Walk (above) – a significant community asset – and follow a route which encircles the settlement, passing, on the way, another surviving piece of sculpture from the West Cork Arts Centre Living Landscape exhibitions, dating from the 1980s to the 1990s and masterminded by Cóilín Murray. We are indebted to Cóilín for providing an archive of photographs to the Ballydehob Arts Museum, and for being willing to contribute his own memories of the installation of the West Cork Sculpture Trail, which has greatly helped in putting together the story of this venture, over a quarter of a century later. 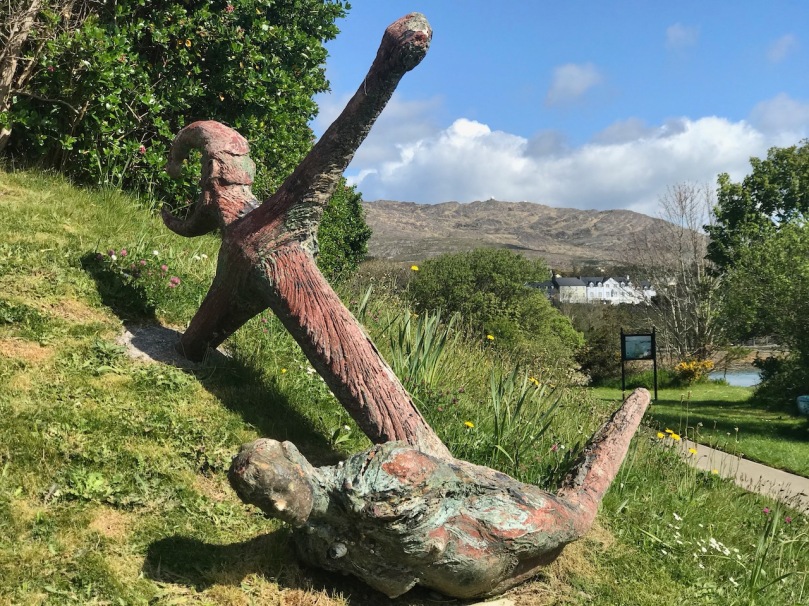 This is the second in a series of posts being published simultaneously by Roaringwater Journal and the Ballydehob Arts Museum, celebrating an important aspect of art history in West Cork. The first article – Behold, Their Bright Shining Future Rising Before Them – discussed Michael Bulfin’s ‘Pyramid’ sculpture beside the N71 road at Skeaghanore East between Skibbereen and Ballydehob. That work can still be seen, but is in a very overgrown state. The subject today is a piece by Mick O’Sullivan, titled Anchor, Mermaid and Lunachán. This is at present a well preserved surviving work from the Sculpture Trail although, like many others, it has suffered in the past from vandalism. 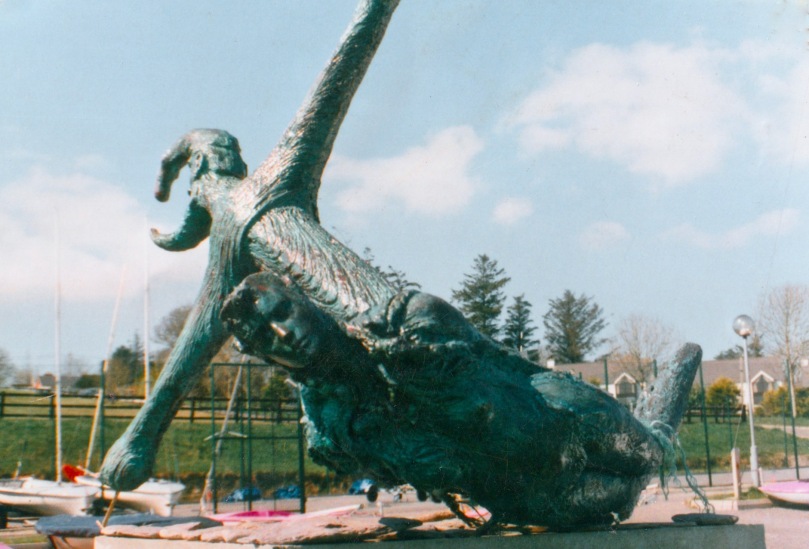 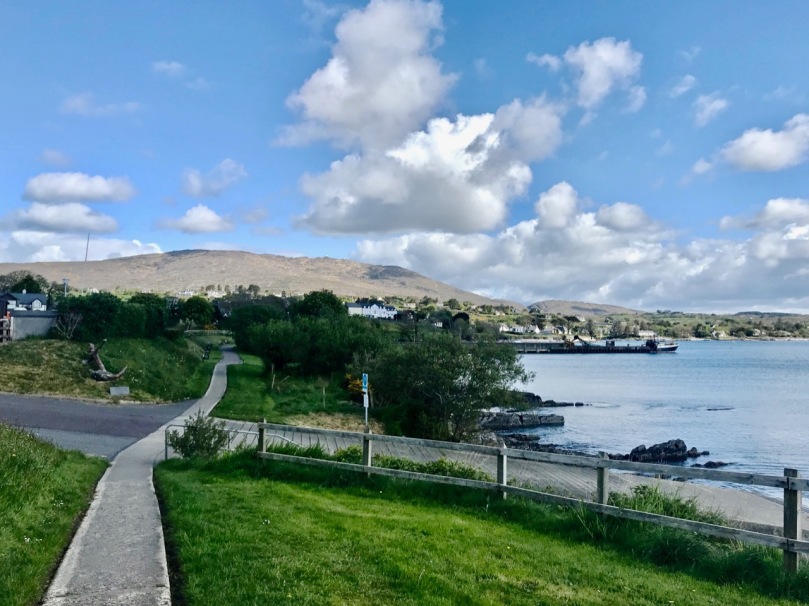 Upper – this photograph dates from the time of installation of the Anchor sculpture in Schull: it was originally situated close to the water below the Sailing School. Lower – the restored Anchor sculpture (far left of picture) is now sited above the Foreshore Walk, by the top of the slipway

The Anchor has the remarkably realistic texture of a corroded and barnacle-encrusted ancient piece of ironwork which might have rested on the ocean bed for countless years… In reality, it is fabricated from glass-fibre resin and – if dropped into the sea – it would float! 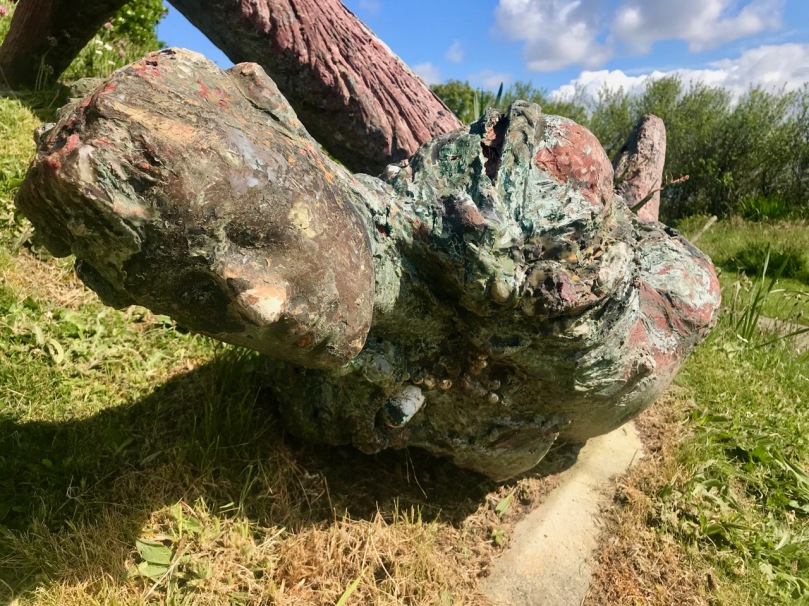 It was, in fact, sent out to sea… Deliberately damaged in the late 1990s, it was broken into two parts and thrown in the water. The two sections ‘sailed’ side by side towards Long Island until they were rescued by one of the Schull fishing boats. Eventually the remains of the artwork arrived in Cóilín’s garden in Skeaghanore, awaiting a saviour. 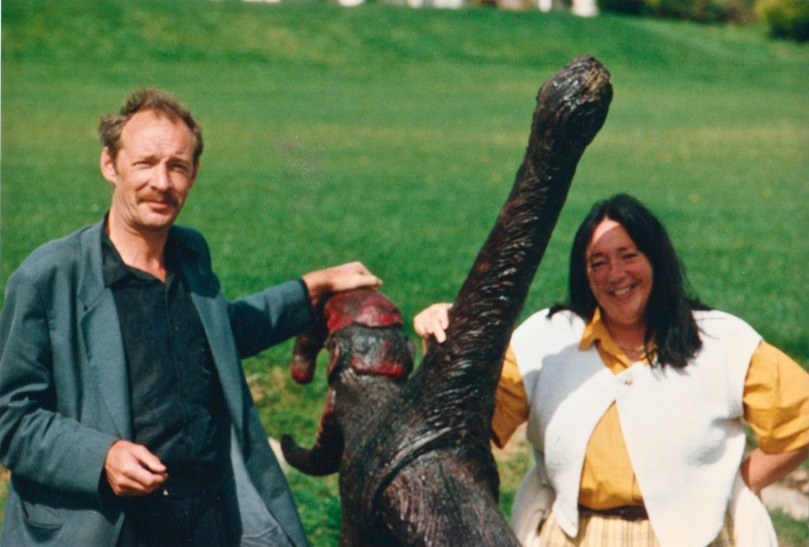 Upper – Michael O’Sullivan at the launch of his ‘Anchor’ sculpture, together with Christine Choice, board member of WCAC. Lower – a 1982 watercolour by Michael O’Sullivan: St Brendan Discovers the Crystal Pool (IMMA Permanent Collection)

Michael O’Sullivan was born in Dublin in 1945. He gained a Diploma in Sculpture from the National College of Art and Design (NCAD), and was a lecturer there until his retirement. He has been greatly influenced in his life and art by the works of James Joyce, and is a noted scholar and lecturer on Joyce. Cóilín Murray and Michael O’Sullivan remain good friends and when the pieces of the anchor were recovered Michael came back to Schull to help in a restoration project on the sculpture instigated by a staff member at Schull College. The Anchor was reassembled and placed in its present position, where it is hopefully less vulnerable. A plaque there commemorates the 2000 ‘resurrection’ project and gives the names of the students who were closely involved in the reconstruction work. 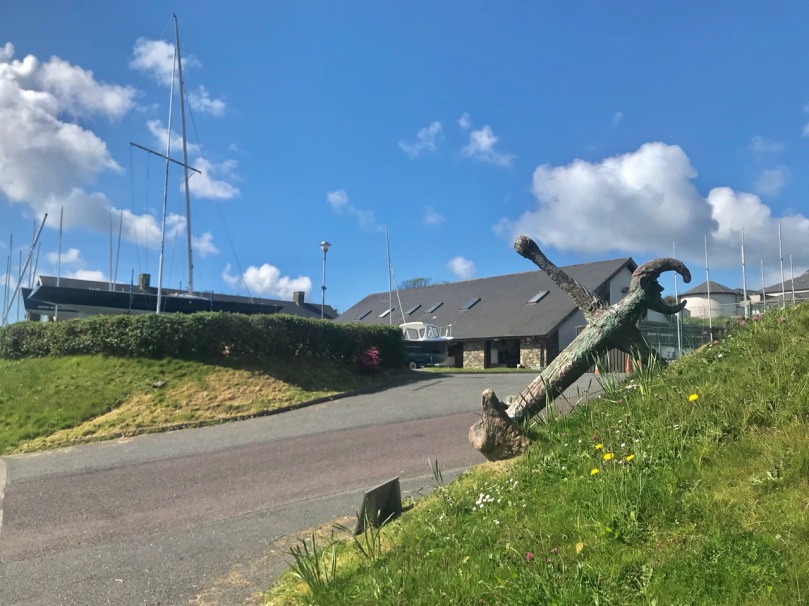 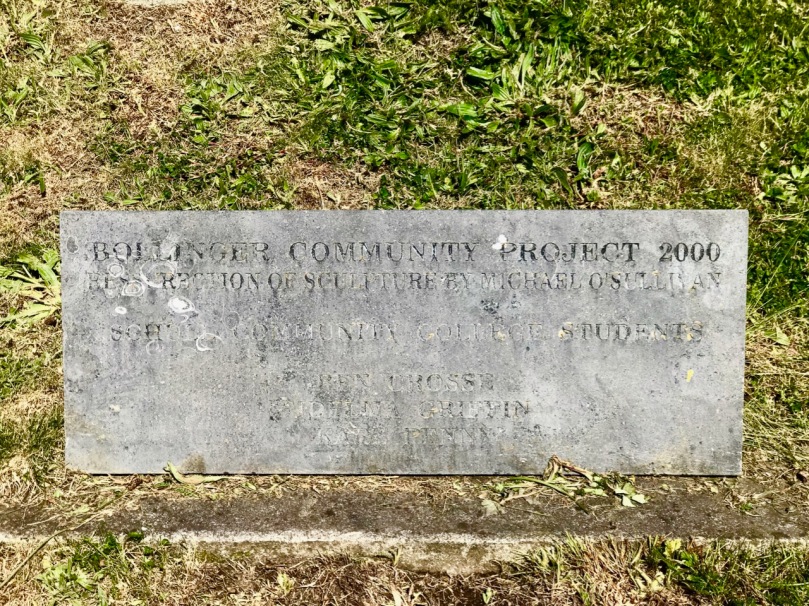 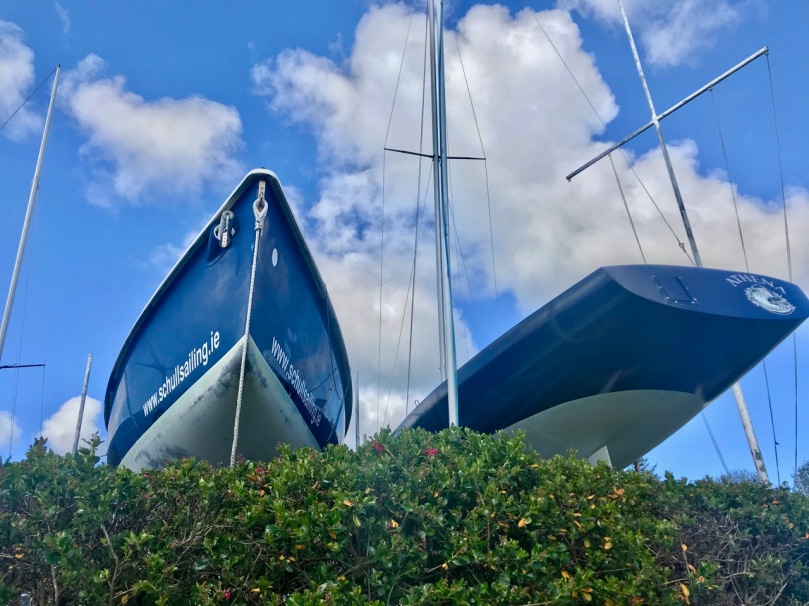 The word Lunachán – referring to the topmost part of the Anchor sculpture – is made up (by Michael)! I asked Cóilín for clarification and here is his response:

The word is an invention of his …Witty? ….
Amadán …in Irish …a bit of a fool …
Luna …the moon …
Lunachán …the reference to the moon and the howling at the full moon etc … Most of Mick’s work has layers and riddles… 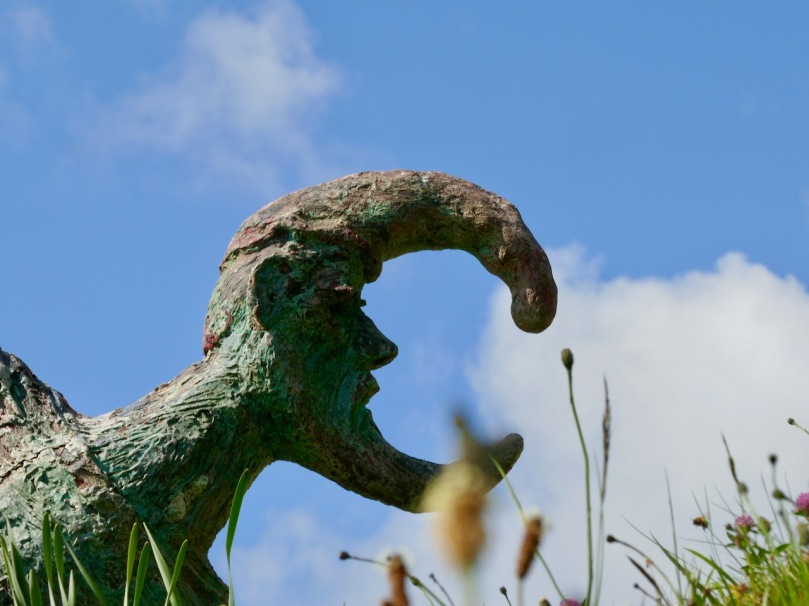 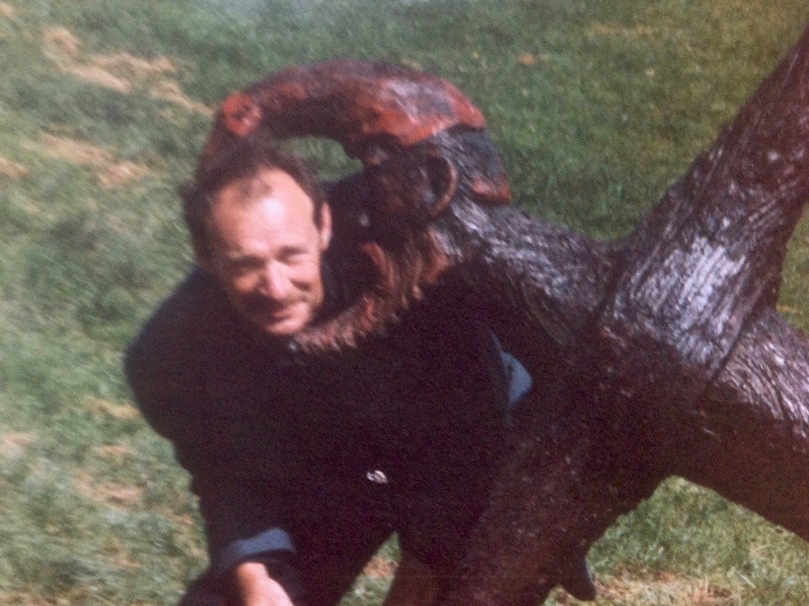 Upper – the Lunachán today. Lower – Michael O’Sullivan and Lunachán – shortly after the sculpture was first installed in Schull

It’s good that the community in Schull was sufficiently enthusiastic about the restoration of this sculpture to support its reinstatement in the Millennium year. Twenty years later, perhaps we should consider a revival of the West Cork Sculpture Trail with new artwork to link in to the few surviving pieces? The overall Living Landscapes project – of which this was just one part – helped to give the West Cork Arts Centre its still vigorous identity and national reputation. Surely – when tourists return to the Wild Atlantic Way post-Covid – such a venture could provide a stimulating cooperation between art and landscape? 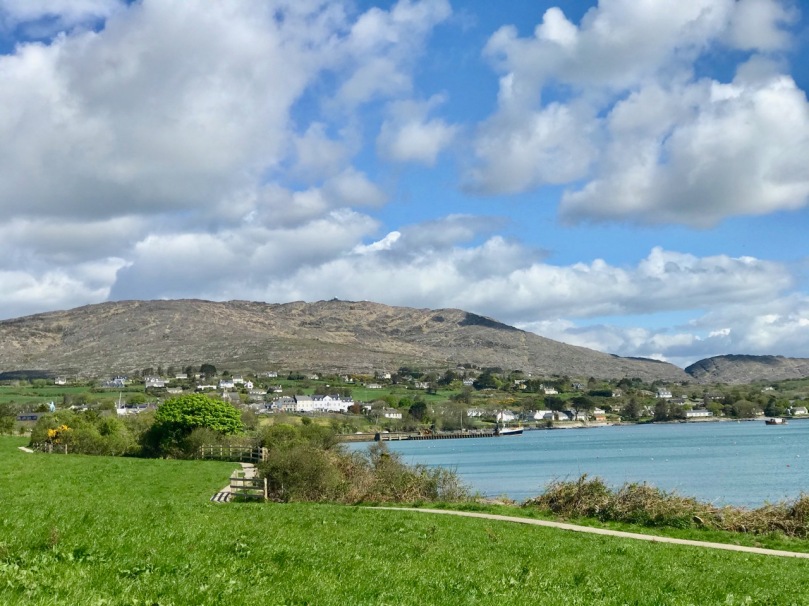 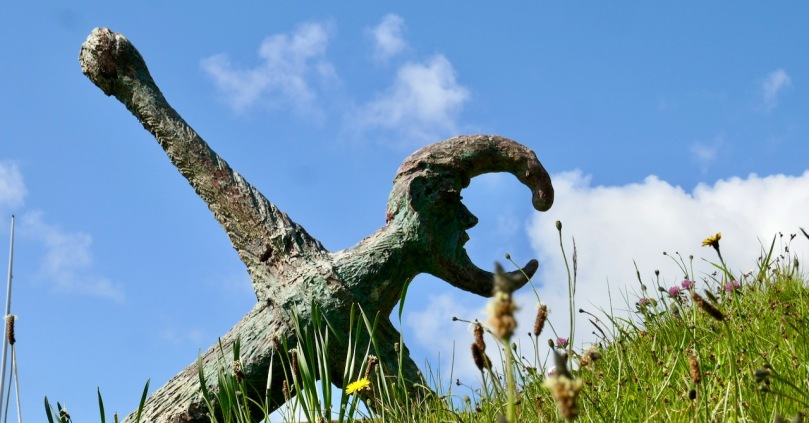