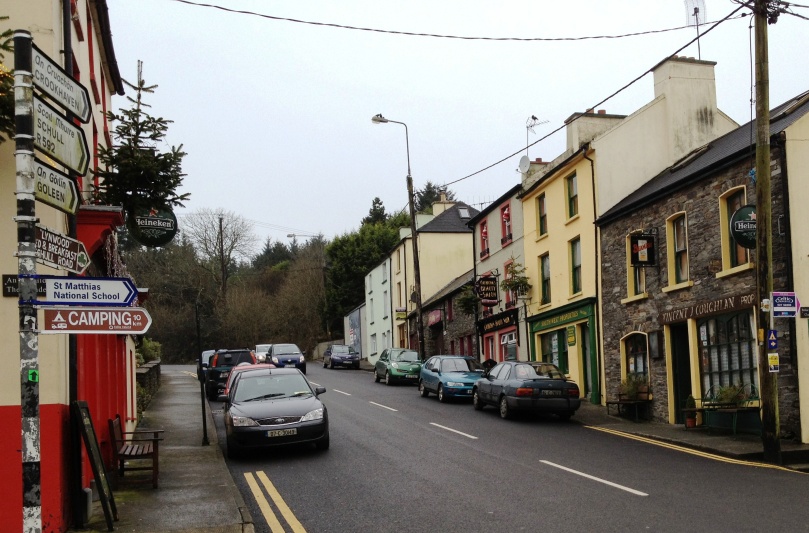 Directional signs in Irish and English, cars parked every which way, street names in small print on the wall. Welcome to driving in Ireland!

This post was first published way back in 2013. Recently, it came to light that a Government Minister was stopped for drink driving in 2016 and was found to be driving on a Learner Permit. He was 48 and had been driving for many years on that permit. Many years before, it had been (inexplicably) permitted to drive in Ireland on what was then called a Provisional License and people just kept renewing them, year after year. Sometimes they had failed a driving test and often they had never taken one. The law became more stringent in 2013, provisional licenses were discontinued, but multiple crackdowns have failed to convince Irish people, especially those from rural areas, to adjust their thinking. What makes my blood boil about this case is that I, who had been driving legally and safely for 40 years, was put through a rigorous, expensive and wholly unnecessary process in order to earn an Irish driver’s license, while so many people here simply ignore the law.

Update: As I was hitting the publish button, the Minister was being sacked.

The following was written and published in 2013. Since then, progress has been made and some Canadian licenses are now recognised in Ireland, with provisos.

In my Driven to Distraction post I alluded to having to get an Irish driver’s licence. I can drive legally for a year on my Canadian licence, but if I intend to stay longer, and if I want to get insurance at reasonable rates, I have to get an Irish one.

No Overtaking (Rules of the Road/RR Page 79)

I have driven for almost 40 years without incident, in all kinds of conditions (Northern Canadian winters!) and vehicles, standard and automatic. I have rented a car every summer in Ireland year after year. I was prepared for some kind of process whereby I would be asked to demonstrate my competence and my knowledge of the Irish road rules – a process which I assumed would also acknowledge my experience and skills. The first part of that last sentence was a realistic assessment; the second part was a hopeless dream. It turns out that I must start from scratch, as if I was 17, as if I had never driven before.

Double yellow lines: no parking at any time. RR p115

Perhaps, you surmise, this is because we drive on the right in Canada and in Ireland we drive on the left. But anybody with a European driving licence can simply swap it for an Irish one, no matter what side of the road they drive on. This also applies to those in possession of licences from Taiwan, New Zealand, Japan and South Korea. Within Europe, all countries have agreed to the principle of mutual recognition for all sorts of qualifications and Ireland happens to have concluded agreements with several other countries for mutual recognition of driving licences. But with the US and Canada, it has not yet happened. There are “talks” apparently, but no real progress. This also means that Irish drivers who emigrate to Canada must go through a staged testing process.

You MUST not park on a footpath. RR p116

Right – fair enough – I must prove my knowledge of the road and my driving competence. OK, theory test now passed, when can I take the road test? Wait, not so fast! First I must take, and pay for, a series of 12 driving lessons from an approved instructor. The lessons must be documented and they should occur two weeks apart: that will take six months. In the meantime, I must have L plates on the car and I cannot drive alone or on Motorways. Did you get that? I CANNOT DRIVE ALONE. I have, in effect, lost my independence. I must rely on Robert to drive me everywhere (we live three miles from the nearest village) or to sit beside me while I drive.

In a future post I will describe the lessons – a whole experience in themselves! Meanwhile, I must admit that studying the Irish Rules of the Road has been a salutary experience. I leave you with some photographs to illustrate the Irish approach to road signage and to the observation of the Rules. 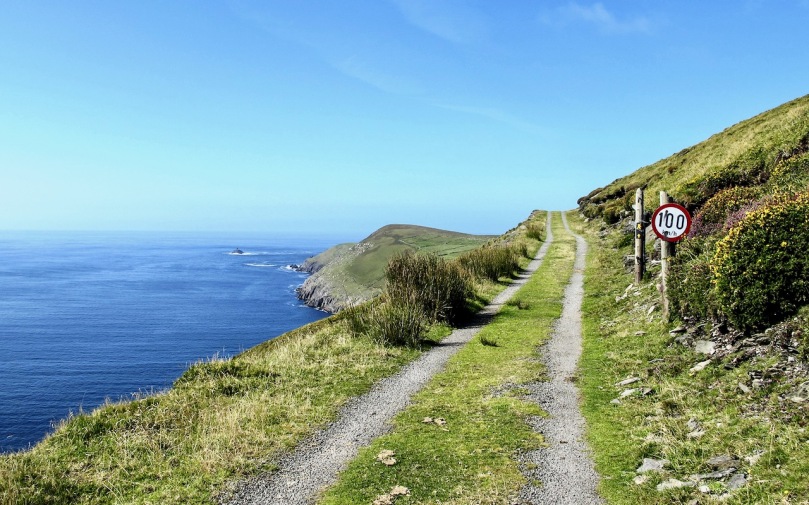 Drive at a safe speed. RRp88 (photo by Amanda Clarke)

Readers will remember my travails with the Irish driving system. I wrote about having to apply for an Irish Driving License and then about the mandatory driving lessons and passing the driving test. I promised myself that when it was all over I would write to the Minister for Transportation and make recommendations about how people like me could be treated respectfully and flexibly.

Yes, we do have to come right through the village.

I’ve finally written the letter and have extracted my recommendations below. I would be interested in whether readers agree with them. I’d also love to hear your personal experiences of driving in Ireland. It’s a unique experience in many ways – I am constantly bemused by what I observe as I navigate the boreens and village streets of this part of the world.

EXTRACT FROM LETTER TO MINISTER OF TRANSPORT, TOURISM AND SPORT

There is no justification for such an inflexible approach to holders of foreign licenses. I know Ireland is committed to negotiating mutual recognition agreements with other countries over time, and that Canada may be a little more complex since licensing is handled by individual provinces, thus  requiring recognition of ten provincial licenses rather than one national one. I also understand that progress is being made, but slowly.

Since my license happens to be Canadian, I will venture now to make some recommendations on an alternative approach to how holders of Canadian licenses (and by extension others) could be treated.

The Road Safety Authority is doing a good job of raising the standards of driving in Ireland. In doing this they are battling decades of deeply-engrained negative attitudes to careful driving and to adherence to licensing regulations, especially outside the major metropolitan areas. I applaud this progress towards real change to the culture of driving in Ireland. But please, allow flexibility in how the regulations are applied so that someone with 40 years of driving experience is not treated like a  beginning driver. 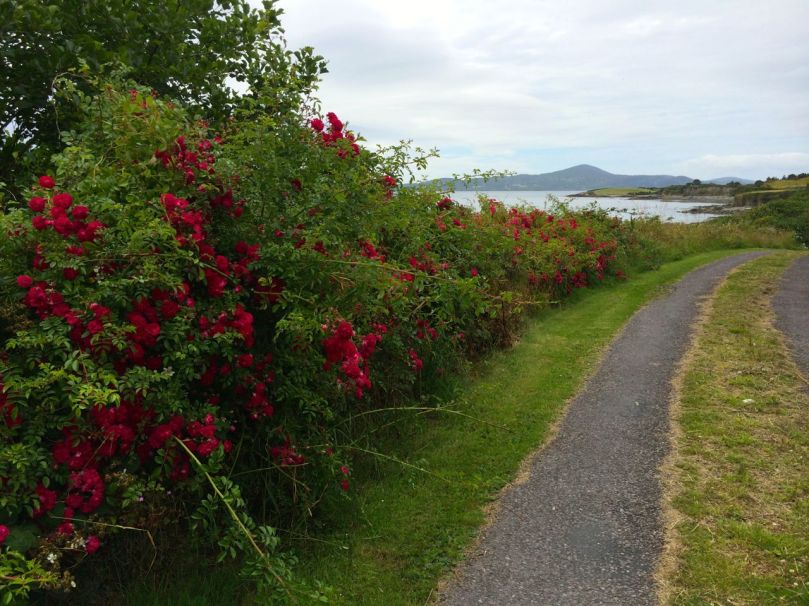 Don’t get distracted by the scenery

I wonder if I will get a response. I will let you know. 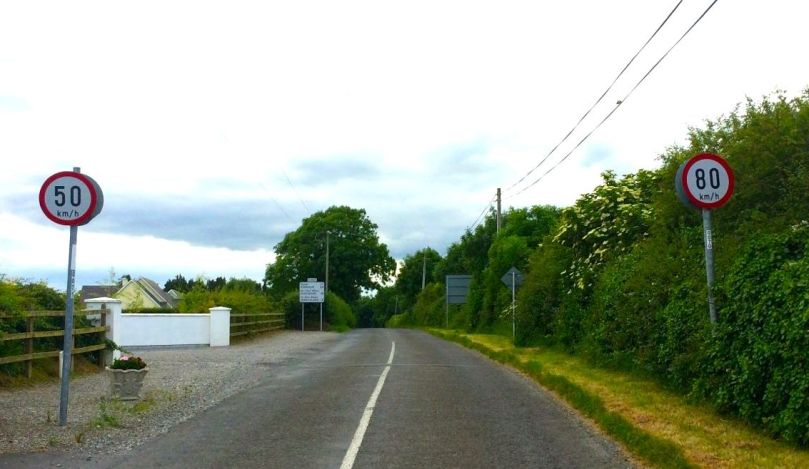