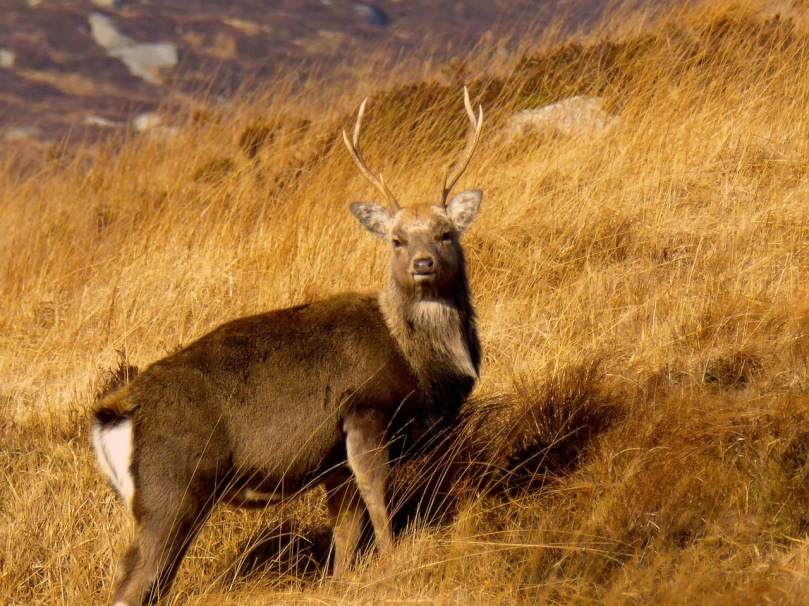 Sika stag in the Glendalough Highlands

Having spent many years in Northern Canada, surrounded by moose, elk, caribou and deer, I was intrigued to learn that Ireland also has a significant population of deer. The Red Deer is our only native species, preserved thanks to the work of private conservationists in Kerry and now reaching healthy population numbers. Fallow Deer are the ones you see in parks (like Dublin’s Phoenix Park), although there are lots of wild ones too, descendants of those introduced by the Normans in the 12th Century. Finally, there are Sika Deer, introduced by Lord Powerscourt in Wicklow for his demesne, but now numerous in wild herds in the Wicklow Mountains and elsewhere. Here in West Cork there are occasional sightings of both Red Deer and Sika Deer – including narrow misses by drivers.

Sika hind and young one

Deer hunting has become a sport in Ireland and the licensing laws are constantly being examined and refined. Deer in parks are generally protected, and Red Deer may not be hunted at all in County Kerry. The Wild Deer Association of Ireland, an ‘independent, national organisation for deer management and conservation,’ represents ‘those involved  in deer management, deer stalking and people with an interest in the conservation and well-being of Ireland’s wild deer herds.’ Their excellent website is packed with information for any questions you might have about wild deer. Deer management is not uncontroversial in Ireland, as attested by a recent article in the Irish Times by naturalist Michael Viney.

Having grown up in Wicklow, I had become interested in the work of Fran Byrne, a wildlife and landscape photographer of the highest calibre, and when we saw that he was leading a Deer Photography Workshop in the Wicklow Mountains we jumped at the chance to enrol.

Deer on the horizon!

The word ‘workshop’ conjures up an image of earnest participants wearing name badges and writing on flipcharts, but Fran had warned us that this was not what we were signing up for. Having met our fellow participants (great group!) on Friday night, we gathered on Saturday morning, picked up our packed lunches from the hotel and set out, equipment in hand, to hike up to the highlands above the Upper Lake at Glendalough. (Glendalough, one of the most historic and beautiful places in Ireland, deserves its own post some day.) Once I saw our route I was glad to be carrying my tiny Panasonic Lumix camera rather than the enormous equipment of the other enthusiasts, because this was a HIKE. 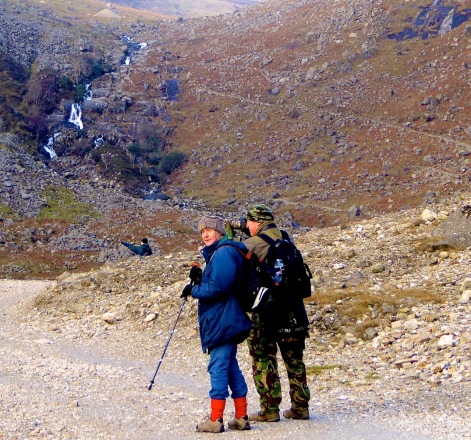 At the start of the zigzag trail

Getting up to the head of the glen was arduous enough, but then we struck out across the trackless wild country. It was rough and wet, there was a biting wind (this was January, after all!) but Fran promised us that the deer, after recent snowfall, would be down from the higher ground and we had a good chance of sightings. And suddenly, there they were!

At this time of year the stags are rejoining the females and hanging out in herds. We saw male-only groups, females with young ones, and mixed groups. Our eyes gradually tuned in to the tell-tale white rumps moving through the bracken and rocks as we scanned the hillsides. Some of the deer, particularly one doe, seemed unbothered by our presence, others ran skittishly when we approached. I was grateful for the long lens on the Lumix, which allowed me to get some good shots where we couldn’t get too close.

Back at the hotel we downloaded our photos, Fran gave us pointers on processing the images and we admired each other’s captures. An excellent dinner and lots of chat later, we were all yawning after our exertions. But back we went again the next day, groaning and stiff but determined to get up to the high ground again. 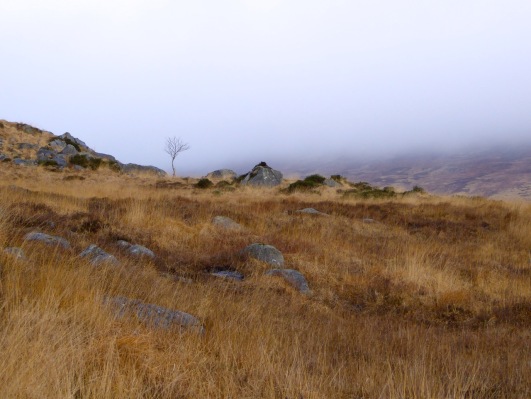 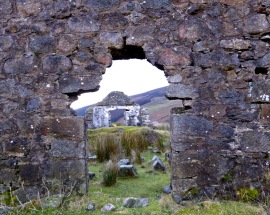 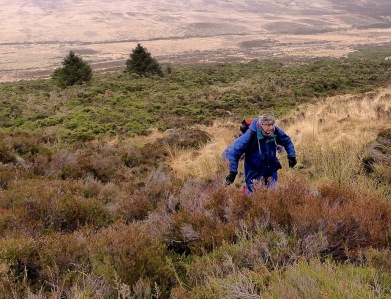 Climbing the hill on Day 2

After the clear blue skies of the previous day, we were presented with a mist that descended on us and worsened during the morning. Nevertheless, having taken  a different route we were rewarded again by good sightings.

We were particularly lucky to be joined by Joe Murphy, a deer expert and leading member of the Wild Deer Association. He filled us in on the current state of Irish deer populations, what threatens them (their only predator is humans), modern management practices and hunting regulations. He also volunteered to climb above one small herd to see if they would move away from him and towards us. Unfortunately, a lone hiker heading up into the hills scattered them before they started down.

Browsing near the stream

I’m not sure when I was last as footsore and achy as I was last Monday morning, but it was worth every creaking bone and every throbbing muscle. If you’d like to do the same, contact Fran Byrne through his Facebook page. And don’t worry, you won’t have to slog up the mountain to take a workshop with him as he also does woodland rambles and garden walks. Mind you, he did describe our exertions as “leisurely” at one point, so be prepared!

There are wild goats on the cliffs too