During our anniversary trip to Ballymaloe (over the other side of Cork) we couldn’t resist a diversion to Cloyne, where Finola remembered having visited a round tower in her youth, just a few years ago. At that time it was possible to climb up inside the tower, after calling in at the local post office to collect the key. Round towers are a significant archaeological feature of Ireland and I like the enigma of them: no-one knows quite when they were built or why (a bit like Rock Art), but there are 65 of them still standing in the Republic in various states of repair. We proceeded to the post office to be told that it had been possible to climb up the tower up until ‘just a few years ago’ – now, health and safety regulations prevented it. Later, I read an account of someone who went to see this tower in 2004, 10 years before, and was told that it had been possible to climb up the tower ‘just a few years ago’… which shows that time and memory are relative.

Although we were disappointed in our aspirations to climb the tower, our visit to the post office turned up a very friendly lady who said that she held the key to the adjacent cathedral, and would be pleased to let us go in there instead.

St Colman’s Cathedral at Cloyne – a print from 1853

Cloyne Cathedral: the worship area, a small part of the large building 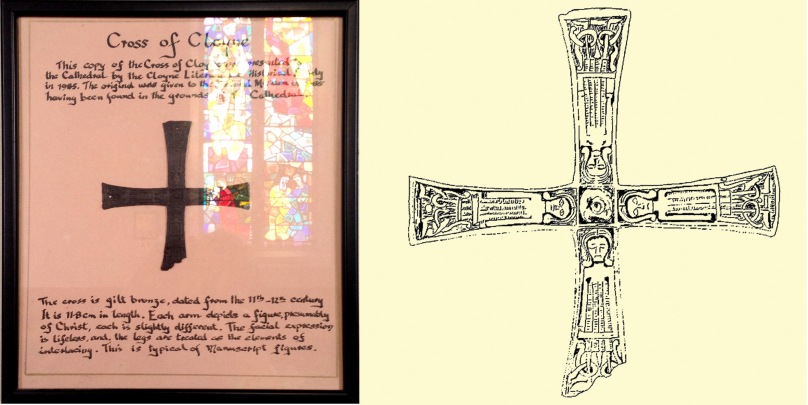 The Cathedral of St Colman in Cloyne is well worth a visit. To this Englishman the term ‘cathedral’ conjures up images of Gothic magnificence with soaring spires, arches and intricate buttressing – and set picturesquely within a medieval city centre; this, however, is a humbler structure – although grand in size – constructed in 1250 and located in a somewhat overgrown graveyard in the back streets of a small East Cork town. For more detailed information on the cathedral, have a look at the excellent blog Pilgrimage in Medieval Ireland.

Every day you should learn something new, and until then I had heard nothing of St Colman: St Colman mac Lenene lived in the sixth century and was a friend of St Finbarr, who we have encountered previously. He founded his monastery in Cloyne in 560 here and the cathedral is built over a network of caves, now inaccessible but used in the penal days by priests as a secret underground link from Cloyne House to the Catholic graveyard in order to say mass for the people. 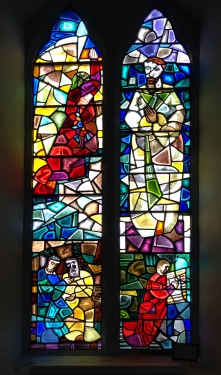 A window by artist Patrick Pye

Nor did I know anything about the Bishop of Cloyne whose alabaster effigy rests in the north transept of the cathedral, watchfully guarded by a wonderfully personable Lion: it all made me think about how I would like the world to remember me after I’m gone… 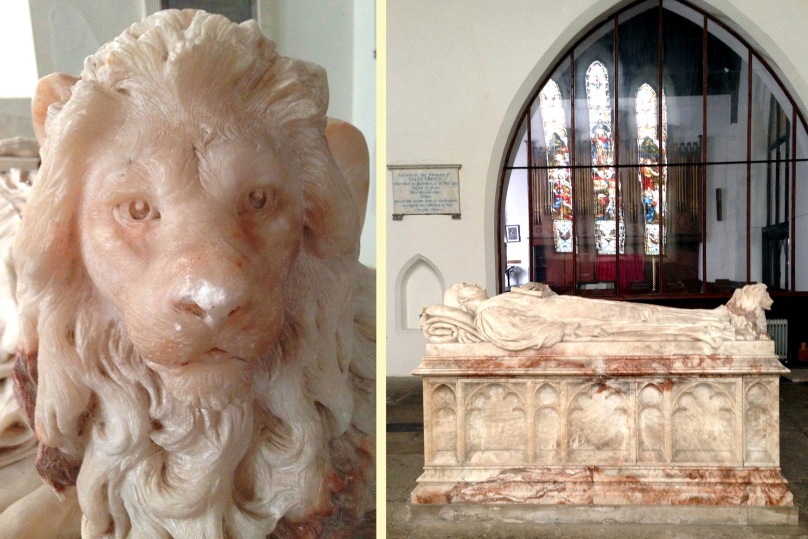 You may know – or you may not – that it was Bishop Berkeley who gave his name to the University of California, Berkeley, although he gets a very scant mention on the University’s website. George Berkeley (correctly pronounced bark-lee) was born on 12 March 1685 in Kilkenny and was educated at Trinity College, Dublin, where he later became a lecturer in Greek. He was a radical thinker and philosopher whose best known achievement was the advancement of a theory he called Immaterialism, also known as Subjective Idealism. This theory denies the existence of material substance and contends that familiar objects like tables and chairs are only ideas in the minds of perceivers, and as a result cannot exist without being perceived.

He left the British Isles for the American Colonies in 1729, settling in Rhode Island but determined to found a Utopian city in Bermuda based in principles which he set out. One was: …for the better supplying of churches in our foreign plantations and for converting the savage Americans to Christianity… while …being in Bermuda would prevent the Native American youngsters from “returning to their brutal customs, before they were thoroughly imbued with good principles and habits.”

Berkeley’s social experiments didn’t get off the ground, mainly due to lack of funding, and he returned to London in 1732 and then to Ireland where he was appointed Bishop of Cloyne in 1734, a post which he retained until his death in 1752.

It’s a long way to Indian Rock: Berkeley, California – named after the Bishop of Cloyne

George Berkeley wrote Verses on the Prospect of Planting Arts and Learning in America – inspired by the colonisation of the New World: …Westward the course of empire takes its way; The first four Acts already past, A fifth shall close the Drama with the day; Time’s noblest offspring is the last…  and it was these lines that were remembered when the city and University of Berkeley were founded in 1866. This Californian institution ‘…became a catalyst of economic growth and social innovation — the place where vitamin E was discovered, a lost Scarlatti opera found, the flu virus identified, and the nation’s first no-fault divorce law drafted…’

From the time of Colman and Finnbarr Cloyne was a great centre of ecclesiastical power. Today the cathedral is a Church of Ireland (Protestant) house and in need of maintenance and repair – a problem for a small population of worshippers. The churchyard is overgrown, and a sanctuary for wild flowers; the ancient gravestones are leaning and barely decipherable. All in all, a place – like so many in Ireland – imbued with a fascinating history which embraces the world.