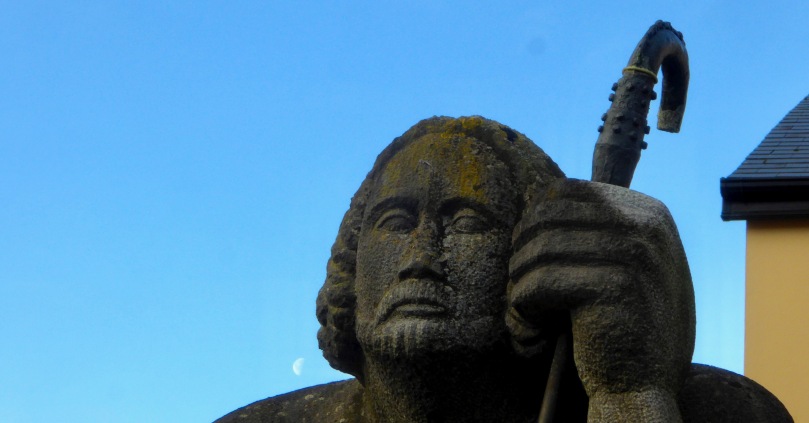 Saint Fanahan is venerated in Mitchelstown, Co Cork. A holy well, a college, a couple of medieval churches and lots of Mitchelstown boys, all bear his name. What’s incontrovertible, then, is that he is the patron saint of Mitchelstown. Or is it? He’s also know as St Fionnchú of Bangor (pronounced Finn Coo, meaning white or fair hound). Same guy. He succeeded the Abbot of Bangor, Comgall, but departed subsequently to end up near Mitchelstown.

But wait – he is also the patron saint of Blow-Ins! At least, that’s what a local man told us when we visited Fanahan’s holy well. Apparently, Fanahan came from the North of Ireland but eventually settled at Brigown near Mitchelstown in Cork. He wasn’t a local, so why not? We blow-ins deserve a patron saint, don’t we? He’s also probably the most muscular saint I’ve ever come across! He was a warrior-monk, famed for both his holiness and his strength in battle. No gentle, man of peace here! 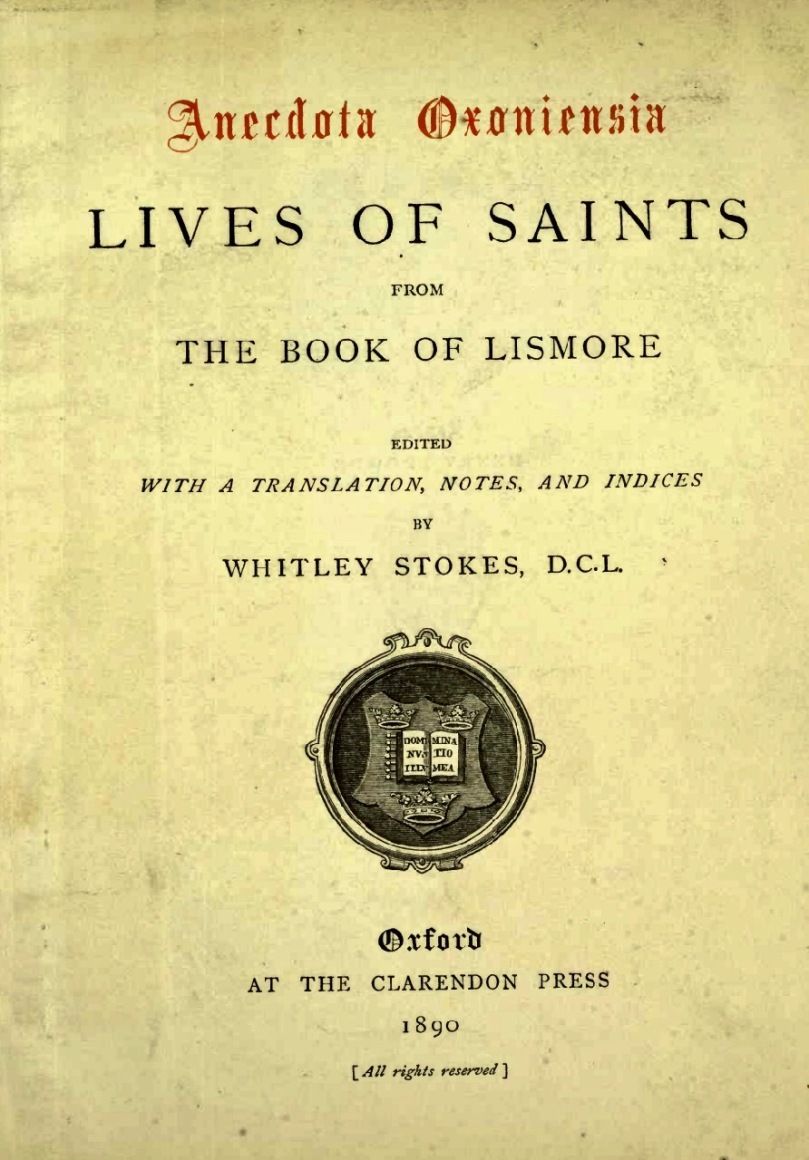 How do we know about these early Irish saints? In Fanahan/Fionnchú’s case, we can rely on a

complete Life, recorded in The Book of Lismore, a 15th century collection of hagiographies and histories. Take a look at this video to learn more about The Book of Lismore. We are fortunate that there are translations – the one I am using today was done by Whitley Stokes in 1890 and is available online. Stokes, a distinguished scholar whose work is still vital, uses a kind of high Victorian language that manages to be a noble translation of the original Old Irish.

You might perhaps want to make a cup of tea at this point – this is going to take a little while – Fanahan/Fionnchú’s is quite a story. Ready now?

Even in the womb, Fionnchú had extraordinary powers, once saving his mother’s life by causing a cloak of darkness to surround her. A great future was prophesied for him that

He will attack the valourous, He will overwhelm the guilty,

He will seek crowned kings, He will be the tree of Tara’s correction,

Who will benefit Liffey, And profit Leinster.

In his youth he was fostered by Comgall, the Abbot of Bangor. Fionnchú performed several miracles while he lived with Comgall: So these are Findchua’s three miracles after he came to Bangor, to wit, making flagstones of the horses of the king of Ulaid; and raising the earth around the king to his knees; and burning his tutor’s cowl by the fury of his anger.

Fionnchú then spends seven years as Abbot of Bangor. After spending the seven years Fionnchú is expelled from Bangor and from the whole of Ulaid [Ulster] because of the scarcity of land. Then Findchua comes from Ulaid, from the north, till he came, through the urging of an angel, to the men of Munster and to their king, even to Cathal, son of Aed, to Cashel; and the king gives him a welcome and ordains to him his choice of land in Munster. Said Findchua: Tis not permitted to me to have land save in the place in which my bell will answer me without the help of any man. Said Cathal : Search Munster till thy bell answers thee, and the place in which thou shalt set up, thou shalt have without contention with thee. 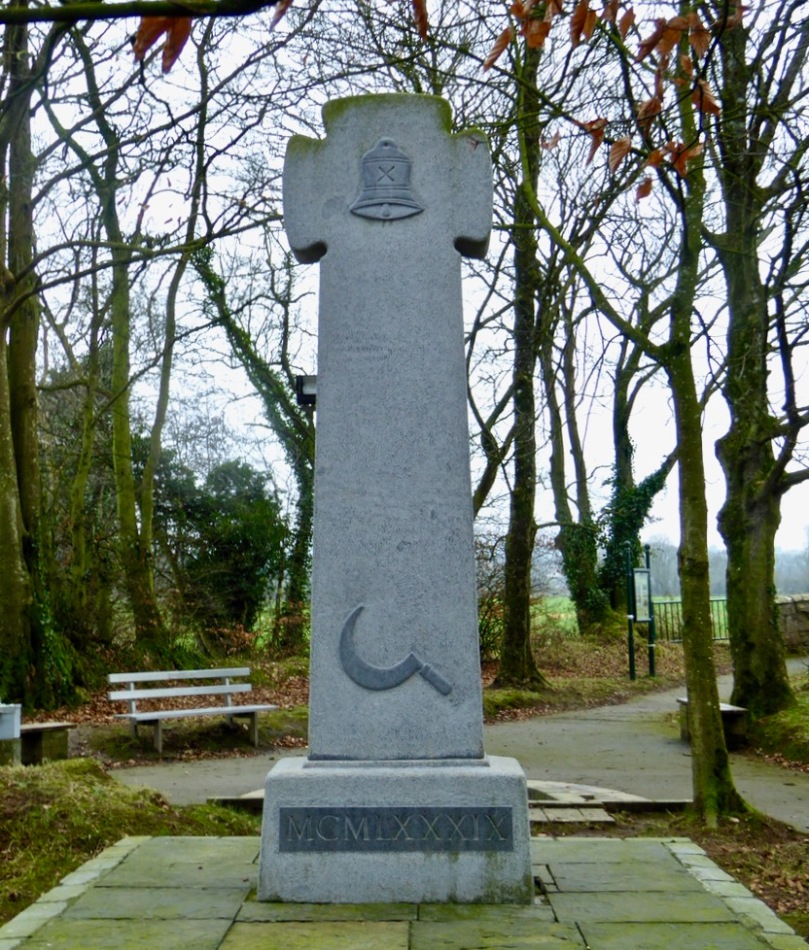 After many vicissitudes Fionnchú and his band finally settle down in the place where his bell answers him. His enclosure is arranged, and his houses are covered, and his households are allotted to the nine other townlands which the king of Munster had in residence.

The King of Déise’s son comes to see him and Findchua gave him, as a soul-friend’s jewel, his own place in heaven. So then there came to him seven master-smiths who dwelt near him, and they made for him seven iron sickles whereon he might abide to the end of seven years, so that he might get a place in heaven; for he had given his original place to the king of the Deisi. He blesses the smiths of that place, and left them continually the gift of handiwork, provided that they should perform or begin it in that place, and palm of masters to them. The smiths ask him to give their name to the place in reward of their work, that is, Bri Gobann (Smiths Hill). Fionnchú spends seven years hanging on his sickles, unable to touch the ground.

Fanahan, from the Ken Thompson Sculpture at the holy well

He did get one break when he marched off to battle to save the armies of Niall of the Nine Hostages, who were being attacked by marauders. In Fionnchú’s rage sparks of blazing fire burst forth out of his teeth destroying all before him. Returning to Brigown, Fionnchú resumes hanging from his sickles. He also spends the first night with any new corpse brought to be buried at Brigown, emerging in the morning, and allows his body to be eaten by beetles. All these mortifications of the flesh cause his fame for holiness to spread far and wide.

The Fanahan sculpture in Mitchelstown is by renowned artist Cliodhna Cussons

He performs various other miracles, including breast feeding a baby, Finntan, the son of Nuada, King of Leinster. Eventually, he goes off to battle for that king too. After that, the King of Ulster invades Munster (his wife wants the Munster kingship for her sons, and was not to be gainsaid, apparently) and the King of Munster, Cathal, sent for Fionnchú (no rest for the wicked!) because he promised me that, whenever stress of war should be on me, he would come with me to battle to help me, having with him the Cennchathach, even his own crozier.

This head has been inserted into a wall at the holy well. He looks like a victim of the Head Battler

The Cennchathach (head battler) was duly deployed in a great battle. The Ulster men roared and bellowed like stags in heat, and charge from the top of the hill. The cleric seeks the slope beyond them and leaves the hill to them. The Ulaid bent down eagerly to deliver the battle. When Findchua perceived that, he took them in that position and allowed them not to rise up beyond their knees, and breaks the battle upon them against the height. Therefore Findchua left the Munstermen, from that time forward till Doomsday, to defeat foreigners and every host besides when charging down a height; and verily this is fulfilled. [Note to self – must let the Munster Rugby team know this vital information.]

The old abbey at Brigown is associated with Fanahan. A round tower once stood here but eventually burned down

Having performed several miracles, and been merciful to the remaining Ulster men, Fionnchú returned once more to Brigown. However, his peace was short lived as, you guessed it, ‘foreigners’ started to make life very difficult in Connaught, so of course, they sent for Fionnchú. Then through the mighty powers of the cleric a terrible heat seizes the foreigners there, in the midst of their camp, from the iron posts that stood all around the camp, so that on the morrow there was found of them nought save their bones and their remains amidst their camp, and showers of their weapons near them. Wherefore Cuil Cnamrois (Recess of Bone-wood) is the name of the place from that to this.

Although the tributes were supposed to last forever, nowadays a polite sign asks for donation for the upkeep of the well

After each of these battles, Fionnchú receives tributes and rewards (milch cows crop up a lot, as do boars and cattle), so that the wealth of his settlement grew. Several other battles are recounted. During one, …the howling and rending of a hound possessed him in his valour on that day. Although no heroes save himself alone were fighting the battle, the foes would have been routed before him, for he cut off the foreigners equally with his weapons and his teeth. Wherefore the name Findchu clave to him, that is, like a cú (hound) on that day was he.

Finally, weary of warfare, he undertakes a pilgrimage to Rome where he spent a year doing penance. We are told nothing further about his life, except that it is recorded elsewhere that he died about 660AD. 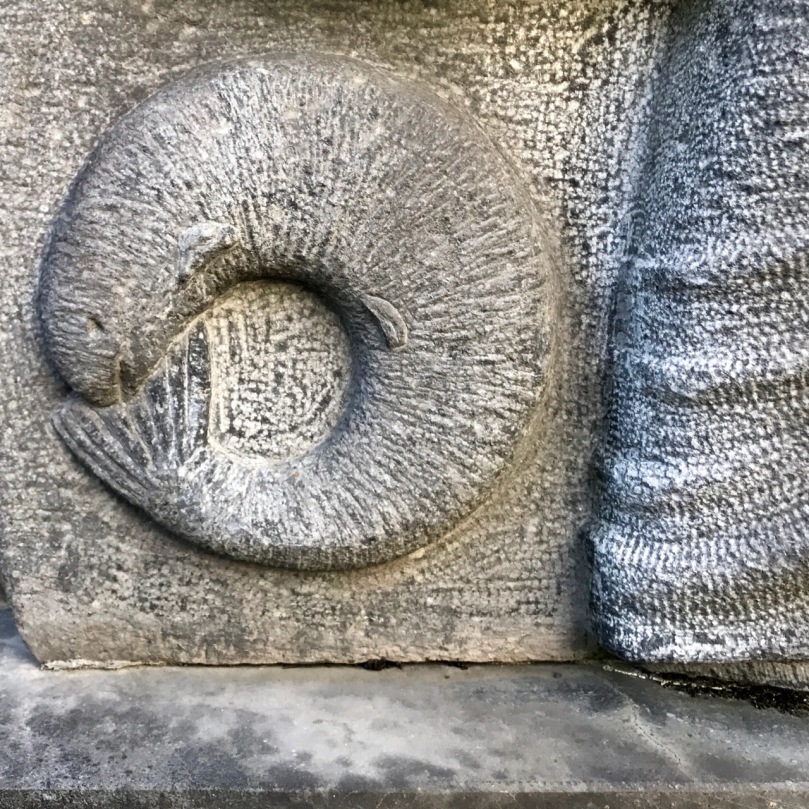 A note at the end of this account of his life says The friar O Buagachain wrote this Life out of the Book of Monasterboice. A further note elsewhere says it was actually written in the Friary at Timoleague.

A unique 700m dead straight, raised causeway leads to the holy well. This unusual feature may be medieval in date.

Many legends grew up about Fionnchú in time, while the name itself transformed into Fanahan, still a popular boy’s name in this area. His feast day is November 25, and it is marked by a Novena (nine days of prayer) before and after that day, when pilgrims visit the well and do the rounds. Because this is a dark time of year, and people come after work, a benefactor has installed lights along the causeway which get turned on for this period. Besides the story of the eel, the well is associated with cures – at one point there were crutches hanging beside the well. The Dúchas Schools Project has recorded some details of the well from the 1930s – even a photograph.

Some writers have pointed out the similarities of Fionnchú’s deeds to those of Cúchulainn, the great hero of the early Irish sagas. Like Fionnchú, Cúchulainn is named for a hound, and like him he performs legendary feats of strength in battle. Some have even pointed out the crucifixion analogy of his time hanging from the sickles, not to mention the implications of his nights in the otherworld with the corpses and his return from the dead.

I think the sculptors capture him differently. Ken Thompson emphasises the holy man of the well, with the eel (sighting an eel is a common feature of holy wells – great good luck attends it) at his feet and his crozier held as any bishop would hold it. But he also suspends him on a cross and gives him a sword. He places (the surprisingly soviet-looking) sickle on the back of the sculpture, along with the bell that rang when he finally came to Brigown. Coming over the little bridge into the glade of the holy well, it’s a beautiful but interestingly ambiguous image that presents itself. 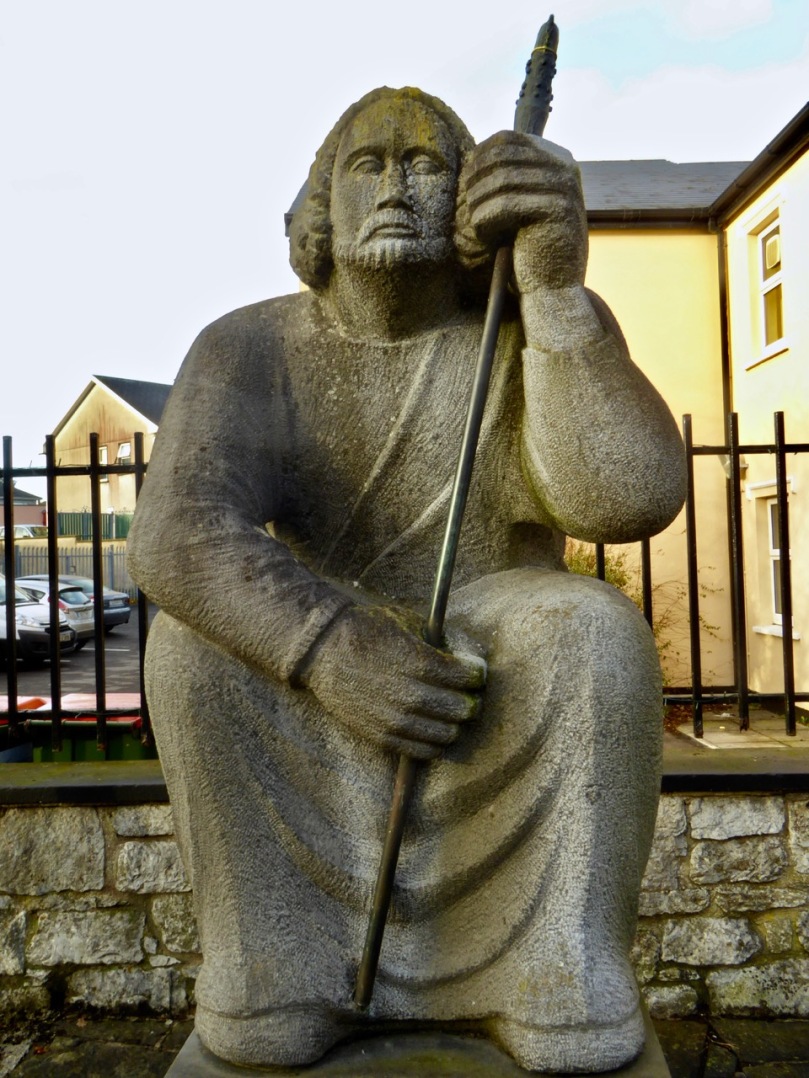 Cusson’s piece is all warrior and places him at the end of his life, perhaps contemplating in sorrow all the mayhem he has been part of. His crozier is between both hands, looking more like the Head Battler than a symbolic crook. It’s modelled on the medieval croziers in the National Museum, such as the one from Lismore. The White Hound (Fionn Cú) is one one side, the eel on the other. The figure is massive and solid, the gaze is faraway, the features grim. Every inch a warrior-monk.