In April I introduced you to the form of architecture known as Irish Romanesque – the dominant form of church architecture in Ireland in the 12th century. If you haven’t read that post already a quick glance over it will get you ready for this one. To continue the series, I’m going to look at one of the glories of the form – the elaborate doorways, often highly decorated, such as the one at Clonfert, above.

Our friends Brendan and Kathie are visiting at the moment and I pressed Brendan, an artist, into service, drawing the Killeshin doorway for me, so I could use his drawing to illustrate the main features of these doorways, and cover some basic vocabulary. (Thank you, Brendan!) Take a look at our joint effort – it will help as I talk about the doorways.*

This simple door is at Ardfert in Co Kerry. It only has one order and no decoration apart from a string of bosses above the arch. The romanesque elements at Ardfert are mixed with later gothic elements – fragments only of the 12th century buildings that once occupied the site. The doorway below is yet another example, built into the wall of the later cathedral building. The stone is soft and much weathered but the columns were once carved, and the door is flanked by blind arcading. 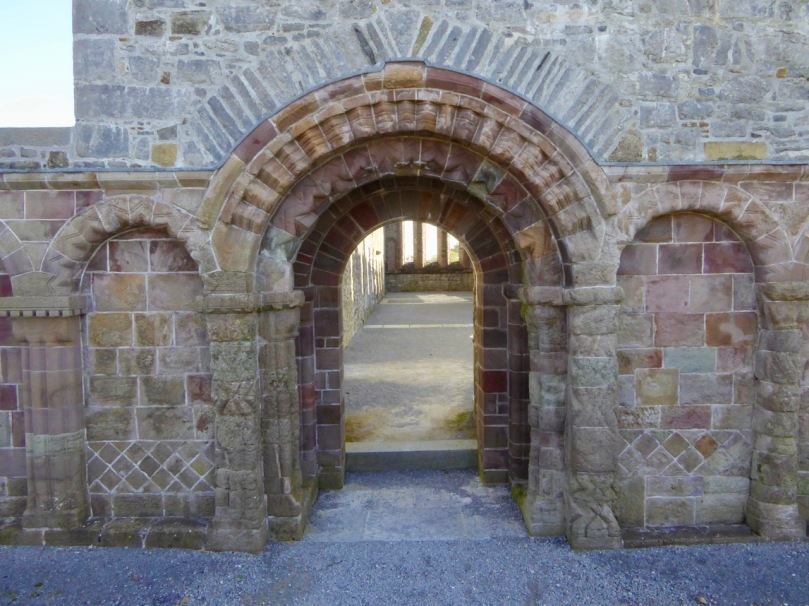 This doorway (below) at Ardmore in Waterford is no longer complete – while the jambs are there, the columns have disappeared, leaving only their capitals behind.

Killeshin in Co Laois, our model for the drawing, is a beautiful site. The early church retains antae on one side, and there are windows and vestiges of a stone roof reminiscent of the early medieval site we described at Kilmalkedar in Kerry. 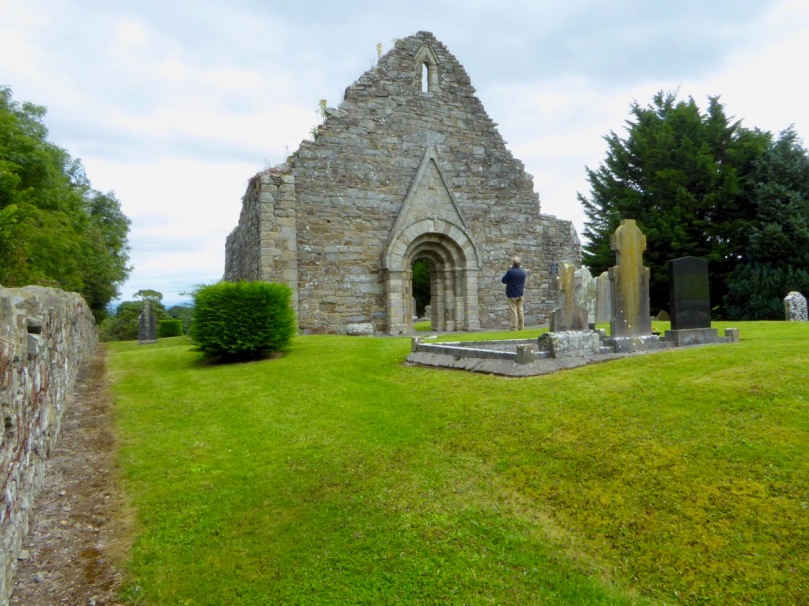 The doorways has three orders and a pediment above. Many of the voussoirs are carved with intricate designs and the keystone features a carved head. 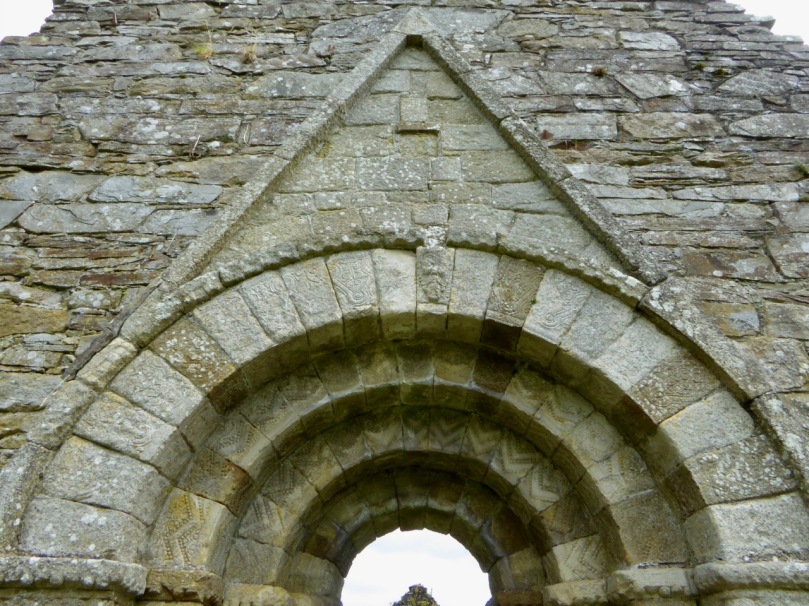 Not only do the Killeshin carvings include intricate geometric patterns and heads on the capitals, but there is writing memorialising the builder and the donor.

Not far from Killeshin is Freshford (Co Kilkenny) where a church still in use has incorporated a romanesque doorway from a 12th century church into a later building. Much modification has taken place – the round widow in the neo-romanesque style is an 18th century addition and the cross at the top of the pediment is also recent.

Note the inclined jambs – meaning the doorway tapers towards the top. The stone is soft and badly weathered, but some carvings are still discernible on the capitals. Interestingly, the jambs originally had niches for statuary, one example of which, two figures, remains,

Two of my personal favourites come now. The first in in Clare, at Dysert O’Dea, a fascinating multi-period site. The romanesque doorway is distinguished by its multiple carved heads on the voussoirs of the outermost archivolt of the arch.

The columns, capitals and inner archivolts are also highly decorated, but it’s those carved heads that never fail to capture the imagination. Not all are human, but of the ones that are I can’t help wondering who the models were – bishops? warriors? saints? kings? Or perhaps the carvers themselves?

Finally, the greatest doorway of all, widely considerered to be the masterpiece of romanesque architecture on Ireland – the great door of Clonfert cathedral in Co Galway. It’s the photograph I led off with, showing the whole doorway. Let’s take a look at some of the details.

The pediment is unusual in that it is filled with triangular reliefs, each having a carved head. Below that are blind arcades with yet more heads. Although weathered, each head has its own distinct character. 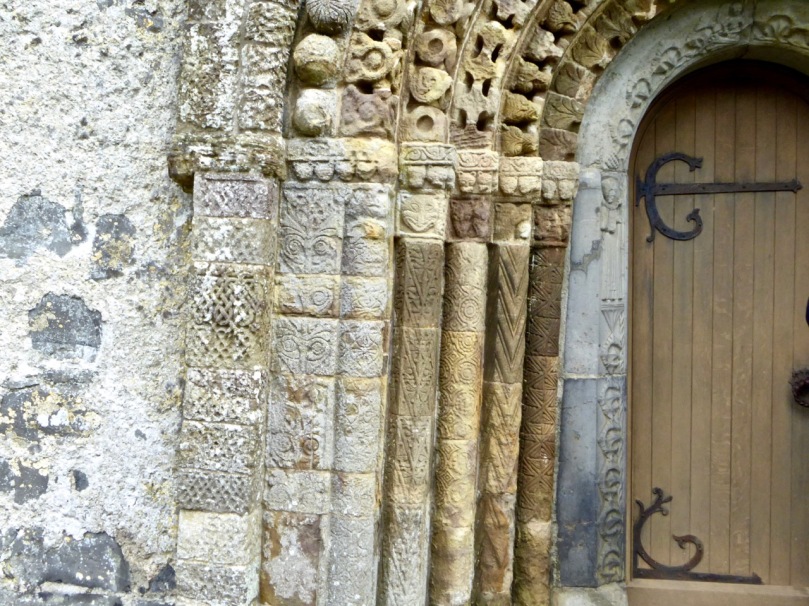 All seven orders of columns and capitals are decorated, as are the archivolts. In fact, it’s hard to find an inch on this doorway that isn’t intricately carved. There are fantastical creatures, animals, geometric and interlaced designs, and on the innermost jamb, two carved figures that are mostly likely 15th century additions, but no less compelling for that.

Romanesque carvings deserve a post to themselves one of these days, as does the iconic building of the period – and this time not just doorways but a complete building – Cormac’s Chapel at the Rock of Cashel. Look out for those posts in the future. Meanwhile, one last glimpse of some of columns and capitals from Clonfert… 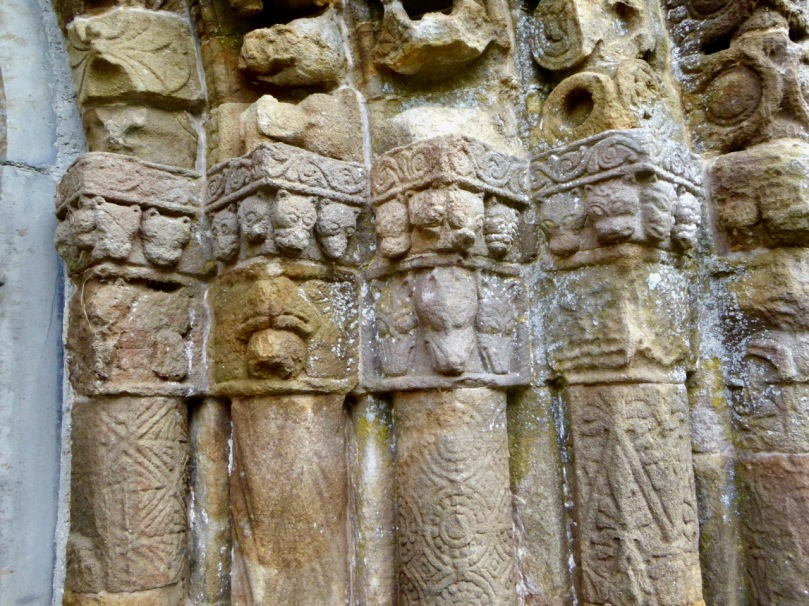 *For a truly erudite treatment of Irish Romanesque, see the Corpus of Romanesque Sculpture in Britain and Ireland – its the Romanesque Encyclopaedia!