Henry David Thoreau, philosopher and naturalist, might be called the patron saint of swamps. He was in love with them. I know how he feels. Hope and the future for me he said, are not in lawns and cultivated fields, not in towns and cities, but in the impervious and quaking swamps…the wildest and richest gardens that we have. 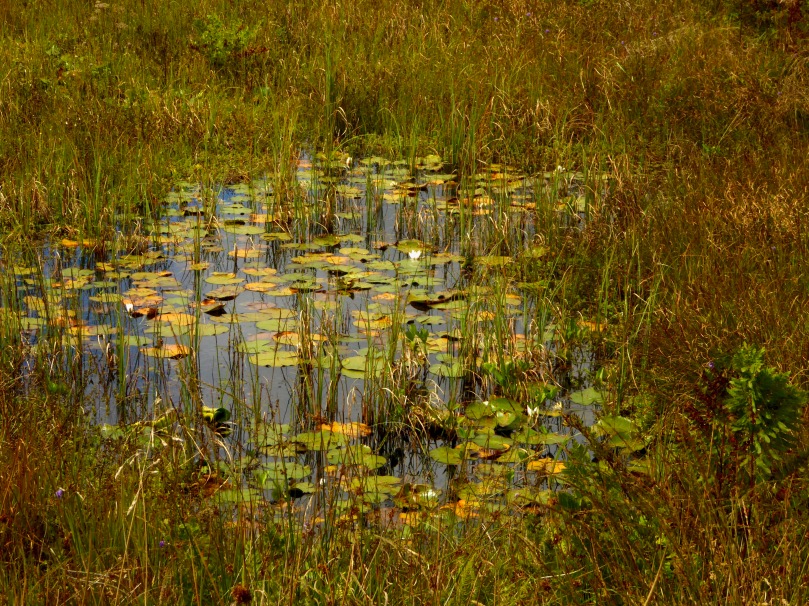 Thoreau was talking about American swamps, but he could just as easily have been talking about an Irish bog, marsh, or wetland. I have two within easy walking distance of my home in West Cork and I am drawn to them like a magnet. One is tiny – a pond in the middle of a boggy area at the highest point in Foilnamuck townland. The other is more extensive – Derreennatra Bog, between Ballydehob and Schull.

A bog is a highly acid environment, and some plants, such as heathers, are specially adapted to deal with this habitat. The mineral-rich pools that form in the bog – technically known as bog soaks – are fed by groundwater and rain. Nutrients are more available in these patches of open water, they provide a less acidic environment and support a variety of plant life different from that of the surrounding bog.

Derreennatra Bog has been recognised as a very special habitat of the lowland bog type. It has been designated as a Natural Heritage Area and is under the protection of the National Parks and Wildlife Service. While there are several reasons for its special status, the main one is that it is home to Slender Cottongrass, an extremely rare form of Bog Cotton that only grows in a few places in Ireland and Britain. 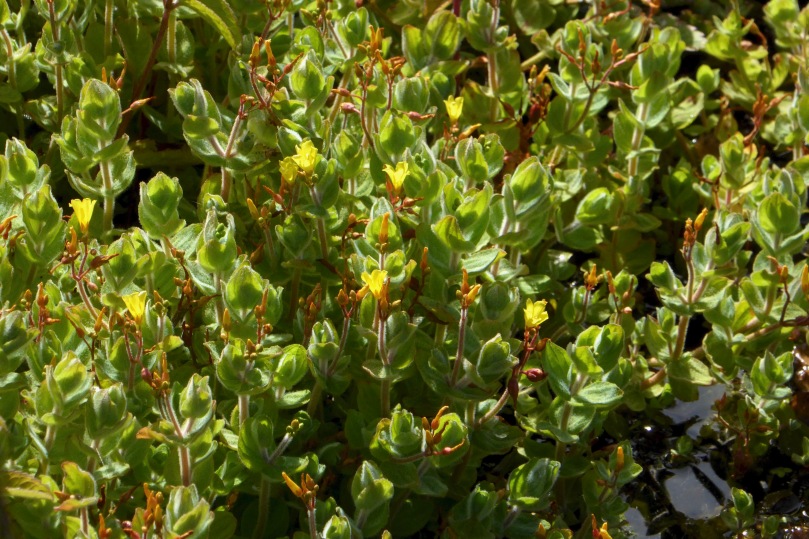 Marsh St John’s-wort, above and below, in its watery habitat

Derreennatra Bog has other uncommon species, but they are hard to photograph without a really good long lens. The one I did manage to get close to was Marsh St John’s-wort. I had to go back several times and wait until the flower opened before I could figure out what it was. It was worth the wait – a very beautiful native wildflower.

Another reason to hang out at Derreennatra Bog is that the lovely, native, White Water-lily flourishes here. It’s an exotic beauty that been here, apparently, since soon after the last ice-age. 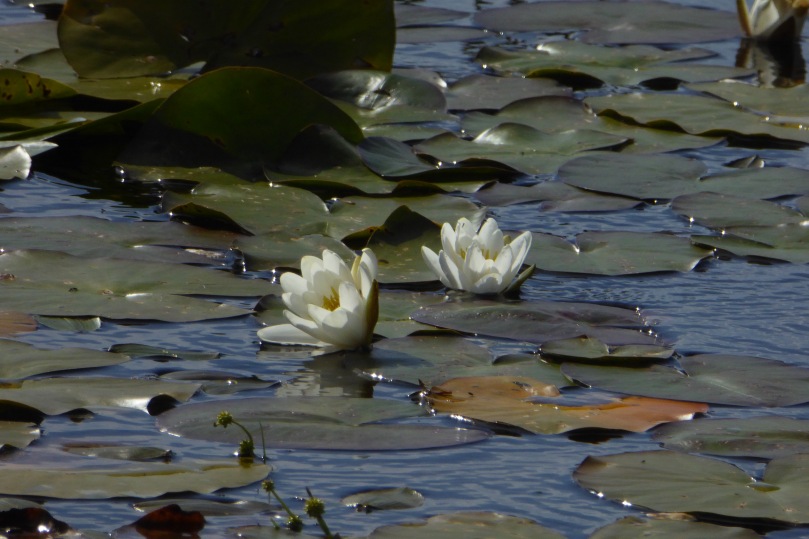 The soak in the bog at Foilnamuck is far less extensive – just a tiny wet patch – but it’s reliably present all the time, probably because it’s bounded by a natural amphitheatre of slightly elevated rocky ground. Here is where I was able to photograph Bog Bean for the first time, although not without getting my feet wet. It’s a fascinating plant – it sits in the water and holds the flower head well above the surface. The flower heads are pink before they open but inside the petals are pure white and fringed with long hairs.

The other plant that loves the environment of this little soak is the Round-leaved Sundew. Sundews are carnivorous – the sticky liquid on its hairy round leaves trap unwary insects, which are then digested by the plant. It’s a marvellous adaptation to the lack of soil nutrients in its habitat.

The spikes carry the flowers, not yet open in this shot, but it’s the leaves that do all the work in this plant

The other flowers of the bog – the heathers and asphodels, the mosses and mints – are equally beautiful and interesting, but I will leave them for another day. 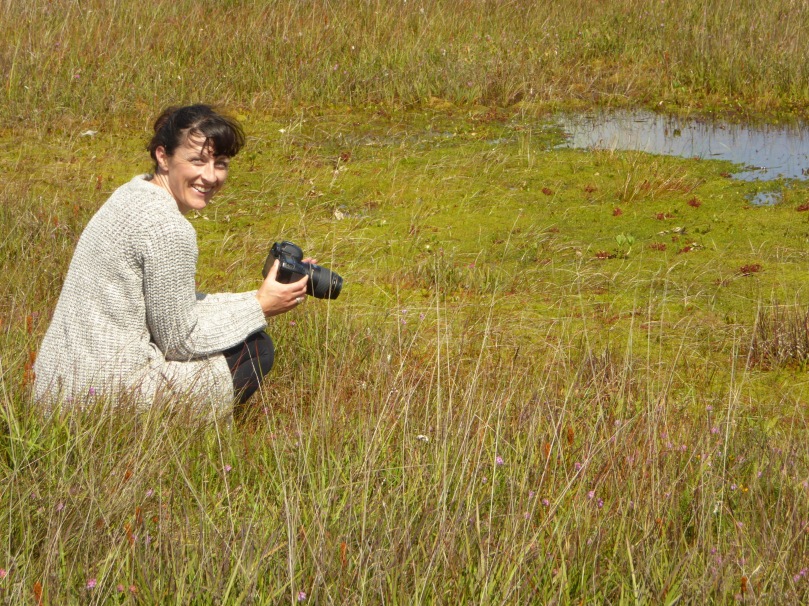 Trish Punch – remember the workshop day I spent with her? She’s gone from teacher to friend and she’s into the wildflowers, just like I am!

Now so, why don’t you wander on over to your local bog/swamp/fen/marsh soak and see what you can see! 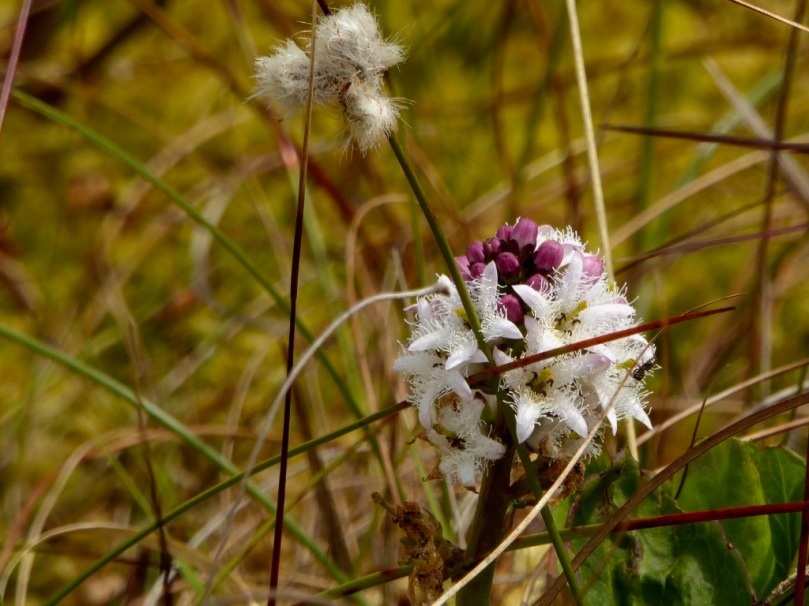