Our talented friend, Peter Clarke, has a marvellous new blog and you HAVE to see this one. It’s called Hikelines and the subheading tells the story – I hike and I sketch. 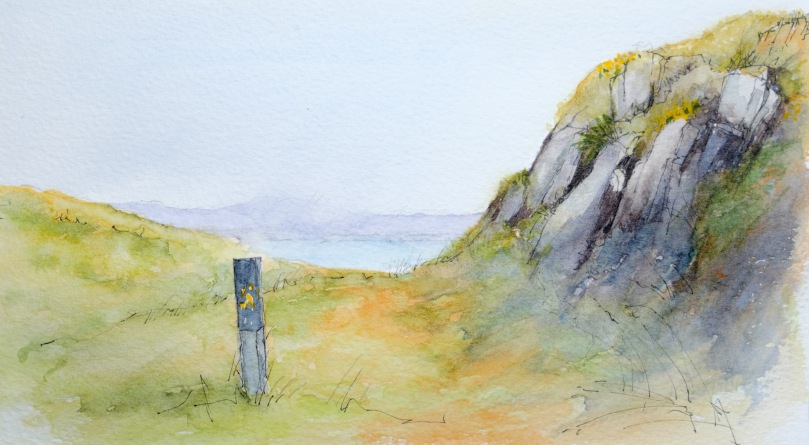 Peter has done two long walks in England, sketching as he went along – the Cleveland Way and the Tabular Hills Way. People who know those routes will appreciate how he has captured landscape, villages and landmarks in his signature style. But I want to concentrate on his two West Cork routes – The Beara Way and The Sheep’s Head Way. 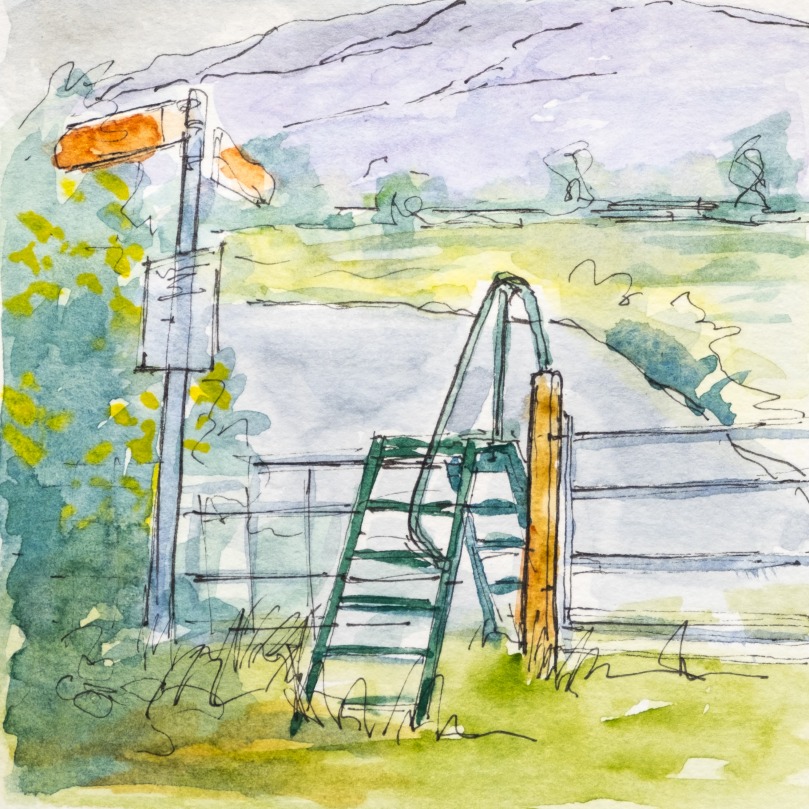 Several things mark these routes as different from the English ones: they seem wilder, more remote; archaeology is all over the place; the place names are unpronounceable; they’re not as organised (especially the Beara Way) for the walker so there are directional and accommodation challenges. However, they are as rugged and spectacular as any hiker could wish for.

The Beara is the largest of the West Cork Peninsulas and the farthest from population centres. Peter accomplished it in nine stages, spaced out between the end of May and the beginning of August, starting and ending in Glengarriff and travelling clockwise.

Some parts were very rough going and signage was not always reliable, but Peter takes it all in his, er, stride. He writes beautifully in a clear accessible style – here’s a sample from his first day:

I reach the ladder-stile that marks the start of a hard, steep climb up to 550 metres. The red line of the route looks impossibly steep on the map but on the ground I find a stony track that dog-legs its way up the contours to make the going a little gentler: nevertheless, my lungs and legs are soon in the red zone. I take shorter strides on the rough stony surface, the plodding drumbeat of my boots accompanied by the tip-tap rhythm of my walking poles. At each turn where I stop to look back, the small houses in the valley are even smaller, the distant hills begin to show on the horizon, catching patches of sunlight, and soon I can see above the nearby hills across to Bantry Bay, glassy calm with Whiddy Island casting long reflections in the waters.

He stops to sketch what catches his eye – occasionally doing a whole sketch, sometimes colouring it later, sometimes taking a photograph to sketch from when the hike is over. He includes technical details for those who like to know. 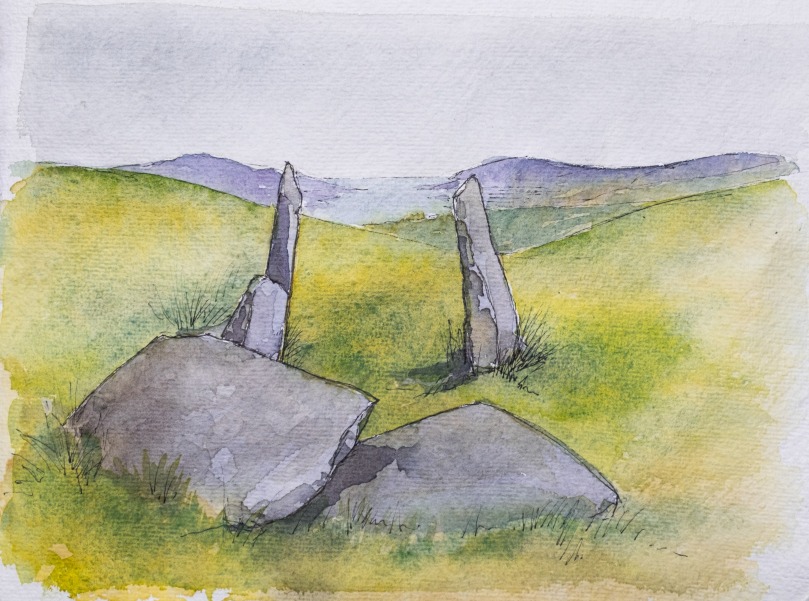 He detours to visit prehistoric and historic sites and often includes these in his sketches. Amanda makes an appearance now and then – she’s on pick-up or drop-off duty and is usually combining this with adventures chronicled in her own blog Holy Wells of Cork. (When I told you about the start of Holy Wells of Cork it was only a year and a half ago – she has now recorded over 200 wells!) She is along as they ride the cable car to Dursey Island but Peter strikes out on his own along the trail.

As I set out alone along the only road, I think about how the past seems somehow embedded in the landscape of places like this. Some might say there are ghosts here and I can understand why. A short detour brings me down to the ruined monastery and burial ground sitting just above the shore. It feels lost and forgotten, even in the sunshine.

I climb back up over soft springy grass onto the road which rises and falls around the smoothly rounded hills that make up the island. Purple foxgloves hang on the cliff edges; the peaks of roofless gable-ends rise from the patchwork of fields running down the lower slopes; sheep and cattle graze below and a kestrel hovers overhead. This road must have seen plenty of traffic at one time and there is even an old bus stop: whether real or not I don’t know. 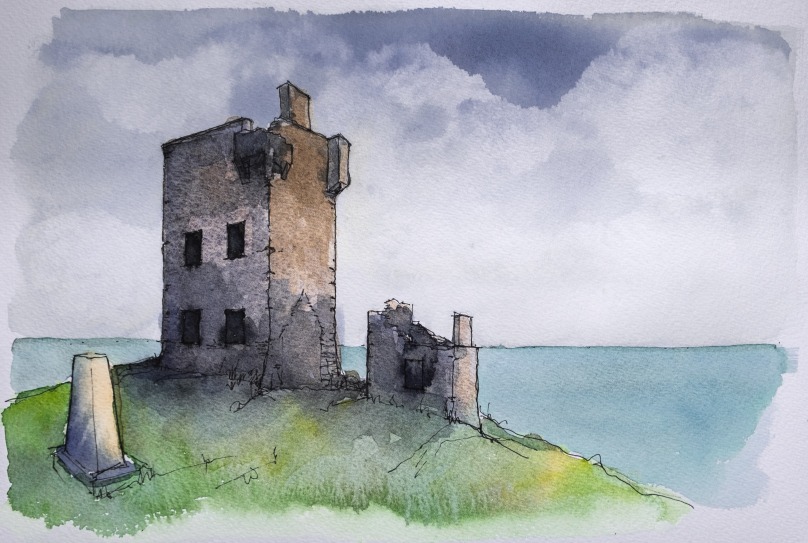 The weather deteriorates as he traverses Beara – you can feel the discomfort of the sodden gear and the squelching mud and it’s a gut feeling of relief when he reaches colourful Eyeries and can dry out. But it finally improves and the next two days brings the compensations of stunning views and stone circles. The final leg back to Glengariff from Kenmare is largely along a busy road – less enjoyable and more arduous. 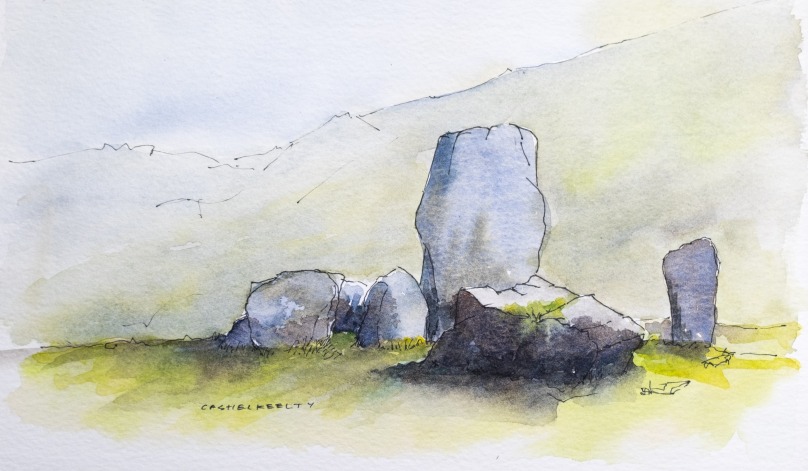 The Sheep’s Head Way is familar ground – for Peter and for me as a reader. Peter and Amanda (regular readers will remember) are the couple behind the guidebook Walking the Sheep’s Head Way – we highly recommend it for anyone contemplating walking on the Sheep’s Head. For Peter, then, this is a continuing of his long love affair with this wild and magnificent landscape. He knows it intimately, he’s walked every inch of it before, and he brings all that love of place to his sketches.

He’s adding more information now too – distances and links to further information as well as links to detailed route directions. Now is the time to sign up for the blog – it’s easy, just insert your email address in the box in the right margin – and follow along. He’s only done four stages, and there are many more to come.

His last post, at time of writing, was one of my favourite walks, encompassing the route I described in Sheep’s Head: Searching for Cornish Miners. Here’s the start of his walk:

I take the ‘Horseshoe Road’ which is more of a track than a road, and descend into the mist which is thick but too bright to be ‘fog’ perhaps. The filtered light brightens nearby colours and softens shadows and I think how it creates a type of liminality with a veil through which things can only be partially glimpsed.

This is one of those treats you can feel really good about. When the email comes in, telling you there’s a new post, just settle down with a cup of tea and immerse yourself in Hikelines. I have deliberately not captioned the images because I want you to see them for yourself! Now so, enough talk – head on over to Hikelines. 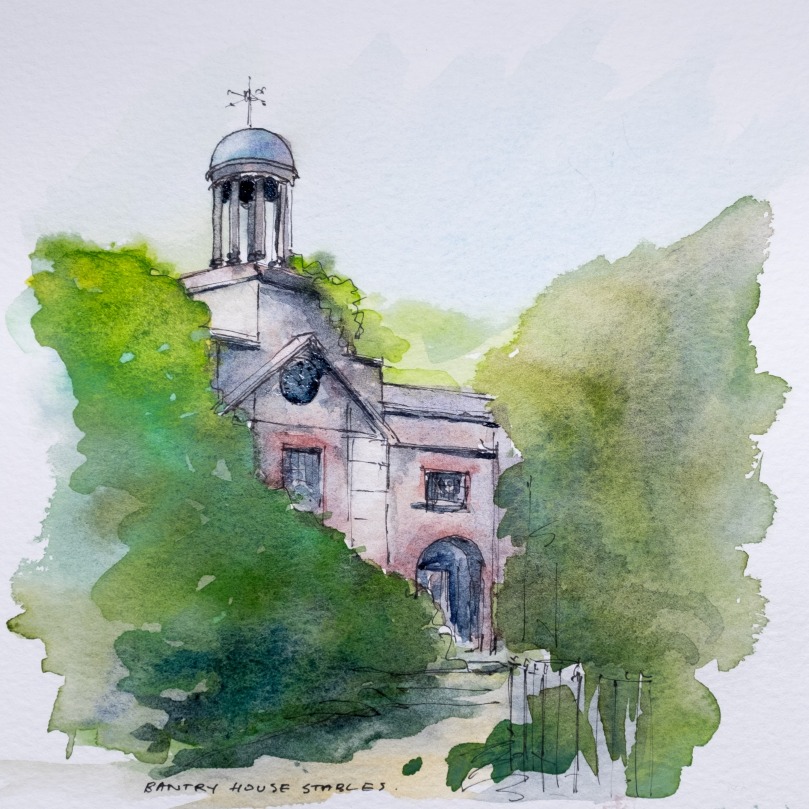