There are two reasons why Ballyfin, in County Laois, was high on our list of Important Places To See In Ireland. One was the story that the name – An Baile Fionn in Irish – could mean ‘The Place of Fionn’ – and there is a legend that the great warrior Fionn Mac Cumhaill was raised here, in the foothills of the Slieve Bloom Mountains. Fionn has left behind him so many traces all over Ireland that the place where he was – perhaps – born and grew up deserves pilgrimage status.

A place fit for a legendary Irish hero? Ballyfinn has associations with Fionn Mac Cumhaill. The lake which is central to the prospect from Ballyfin today was constructed by William Pole in the second half of the eighteenth century

An alternative translation of An Baile Fionn is ‘The White Town’, and the location has long had a reputation as a place of great beauty. Emily Fitzgerald, the Countess of Kildare – a remarkable lady who was illegitimately descended from King Charles II and who bore twenty-two children – wrote in 1759:

. . . Yesterday, I saw a most delightful place indeed, much beyond any place I have seen in Ireland – Ballyfin . . . 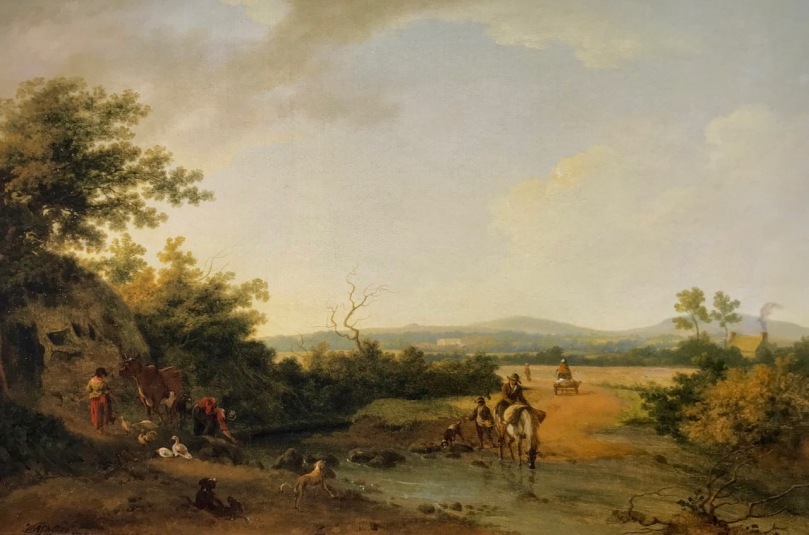 The beauty of the Irish Midlands in the eighteenth century: Ballyfinn House can be seen in the centre distance of this pastoral view from 1784: beyond are the Slieve Bloom Mountains (painting by William Ashford)

In medieval times Ballyfin belonged to the O ‘Mordha clan but was lost during the Tudor conquest of Ireland. The process of Plantation (in which areas of the country were to be settled with people from England, who would bring in English language and culture while remaining loyal to the crown) was first implemented in Laois – then known as ‘Queen’s County’ after Queen Mary I – in the mid sixteenth century. It was a complicated and unstable period in British and Irish history, and Ballyfin saw many possessors ascend and fall until in May 1666 the estate of approximately 3,500 acres was conferred on Periam Pole, a recent arrival from Exeter in Devon. Pole and his son William expanded the estate, built a ‘modern’ house and reshaped the entire gardens and demesne. William planted woodlands and constructed the 30 acre artificial lake which is there to this day. The improvements were ‘grand and expensive and their designs were elegant’.

A view of Ballyfin engraved by William Beauford and published in 1794 shows the woodland, landscaped grounds and lake. The house  – which the Poles extended and improved – was described as ‘a rambling Georgian house’ although with no particular architectural merit

In the time of the Poles, Ballyfin began to build its reputation as one of Ireland’s grandest estates. However, it was not until the Poles were succeeded by the Cootes, in 1813, that the significant architectural statement that is Ballyfin today came into being.

Progenitors of Ballyfin: left – William Pole who died in 1781 (artist unknown) and right – Sir Charles Henry Coote who died in 1864 (artist John Hoppner). The legacy of these two families is a house and demense which are acknowledged as outstanding examples of their period – probably the finest in Ireland

Sir Charles Henry Coote already owned substantial estates close to Ballyfin, and it was timely and appropriate that he was able to purchase the demesne. He employed the father and son team of Richard Morrison and William Vitruvius Morrison as architects to rebuild the house, which is widely acknowledged as one of the most important examples of nineteenth-century neo-classical architecture in Ireland and is famed for its elaborate interior design.

A print showing the ‘new’ house designed by the Morrisons in the neo-classical style (1828 British Library). below – views of the house today

The picture above shows the west elevation of the house with the finely-wrought conservatory that was added in around 1855, designed and constructed by ironfounder Richard Turner, who was also responsible for the great Palm Houses at Kew and Belfast Botanic Gardens and the range of glasshouses at the Irish National Botanic Gardens at Glasnevin, Dublin. It’s my favourite part of the architecture – lightweight and elegant: seemingly timeless – it could be a contemporary structure.

Fine though the house is, it would fail without its context. The demesne is so important as a setting for the rather uncompromising architecture of the elevations. Finola has looked at the grounds and the surroundings. But it’s also the interior that sets Ballyfin apart as an icon of its time. 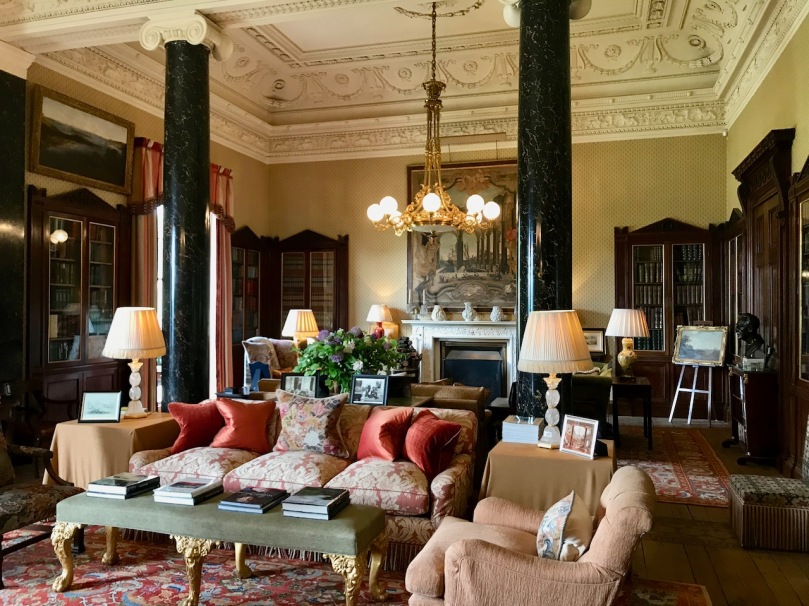 The Saloon: upper – a sketch from c 1855 by the Marquis de Massigny de la Pierre (Coote Archive); lower (and header picture) – the restored Saloon forms the centrepiece of the house today. Note the magnificent parquet floor 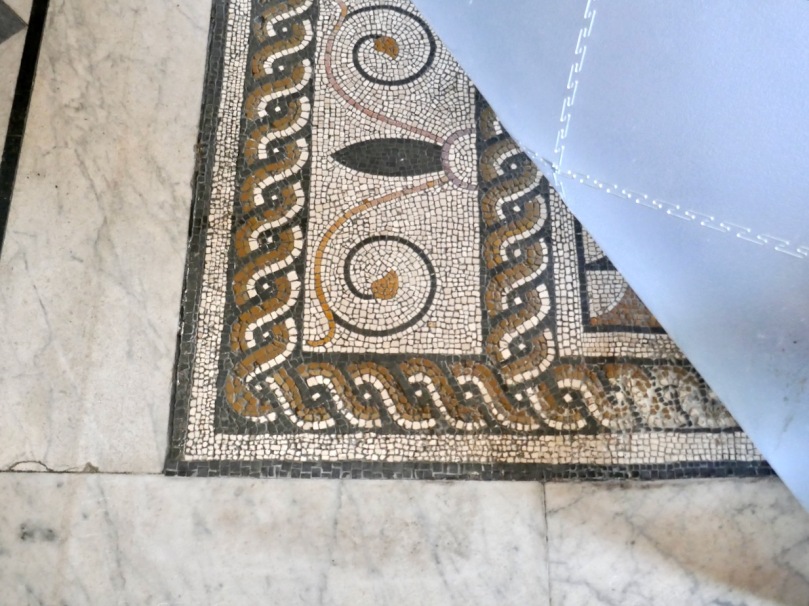 The Entrance Hall incorporates a Roman mosaic pavement: one of the art treasures brought over by Sir Charles Coote from his Grand Tour of 1822. The hall also displays a far more ancient antiquity: the antlers of Megaloceros Giganteus – the Irish Elk, recovered from an Irish bog and some 10,000 years old! 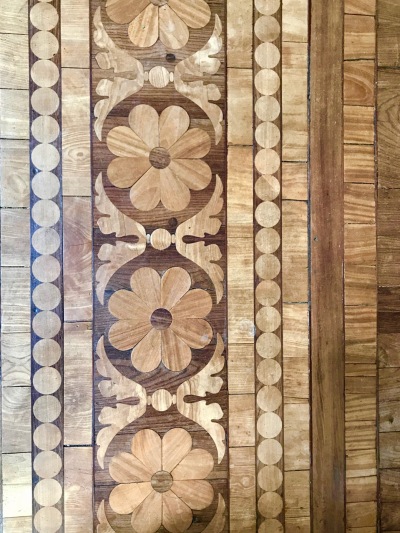 The first part of our story ends with the Cootes: the family owned Ballyfin until the 1920s. But there’s much more to tell about its succeeding time as a school – periods of neglect and decline – and, most remarkably,  its revival and return to distinction through one of the most complete and elaborate architectural restoration projects undertaken in Ireland in the 21st century. Ballyfin is now a first-class 5 star hotel where attention to detail in the service it offers is absolute: it has justifiably won many accolades and awards.

The story of Ballyfin has been expertly and completely documented by Kevin V Mulligan in the volume Ballyfin – The Restoration of an Irish House & Demesne, Churchill House Press 2018. We are indebted to this author and his work. The architectural restoration and the incarnation of the house today is described in Part 2 of this post: Decline and Revival.