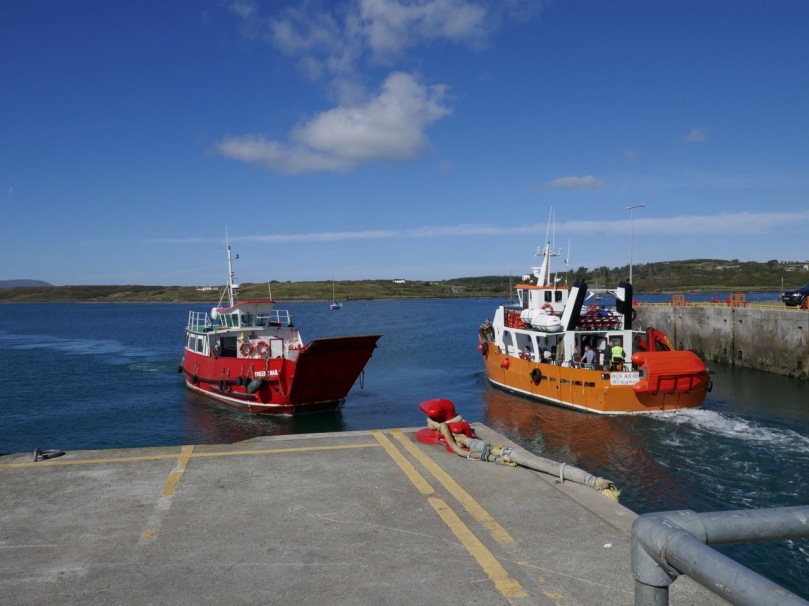 You can’t live in West Cork without constantly being aware of the sea – it’s all around us. And the offshore islands are always in our view as we look across Roaringwater Bay. It’s easy to get to the inhabited ones: there are good ferry services that run year round, although they can be hampered by winter storms. In this picture – above – the Cape Clear Ferry is leaving Baltimore, while the Sherkin Ferry is arriving to collect passengers for that island, including us: on a whim we went across on a wonderful warm September afternoon. 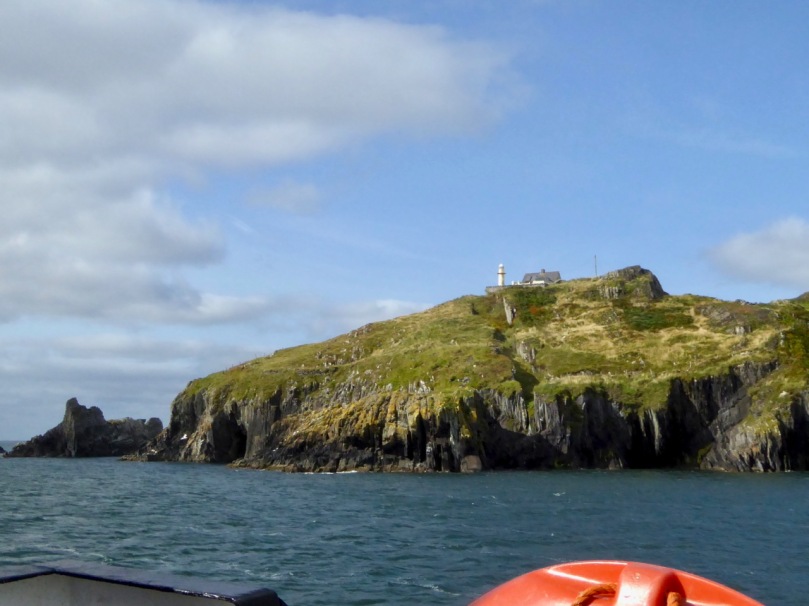 It’s a short sea voyage to Sherkin – all of 15 minutes! But it’s always exciting to be on the water. That’s the lighthouse on Sherkin in the picture above: it was built in 1885 of cast-iron construction and is now fully automated, as are all of Ireland’s lighthouses today.

We did have an aim – to find a piece of Rock Art that may be the earliest physical evidence of human occupation on the island. It’s a cupmarked stone in the townland of Kilmoon, overlooking Kinish Harbour. It was a fair walk to the west, over deserted roads and through fields. After a bit of backtracking we managed to find the stone, well weathered but with its markings still visible. It is situated with panoramic views all the way round, taking in the peaks of Mount Gabriel, Mount Corrin and Mount Kidd on the mainland: surely it must have been placed with those views in mind? 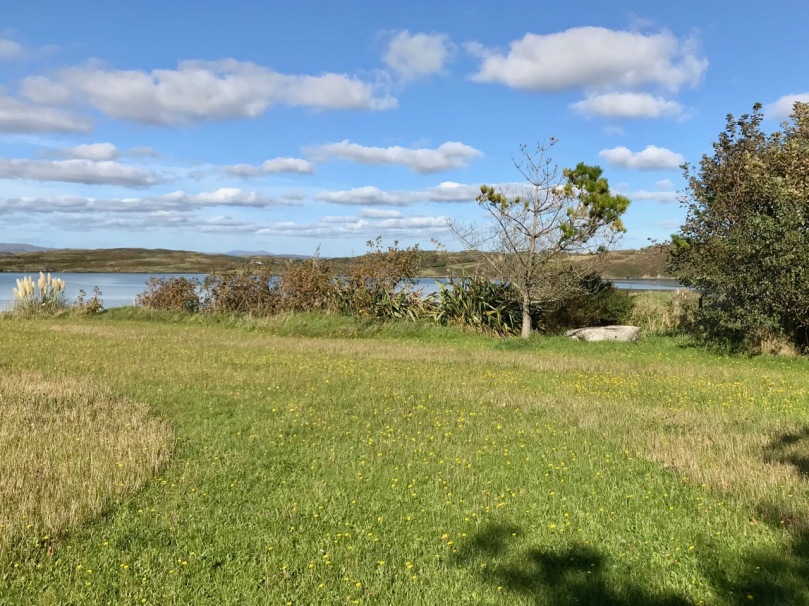 This picture shows the cupmarked stone in its present setting, just inside a private garden (if you go, please make sure you seek permission from the owners of the house!), while the one above shows the panoramic distant view which the stone commands.

Here is the surface of the stone which is heavily blotched with lichen, but it is possible to make out the well defined cupmarks: there are 14 in all. If you want to find out more about cupmarked stones and how they compare with Rock Art in general, we wrote this post a while ago. It sparked off a whole lot of debate (have a look at the comments at the end of that post) – and there is still much to be discovered in a history that may go back 5,000 years. 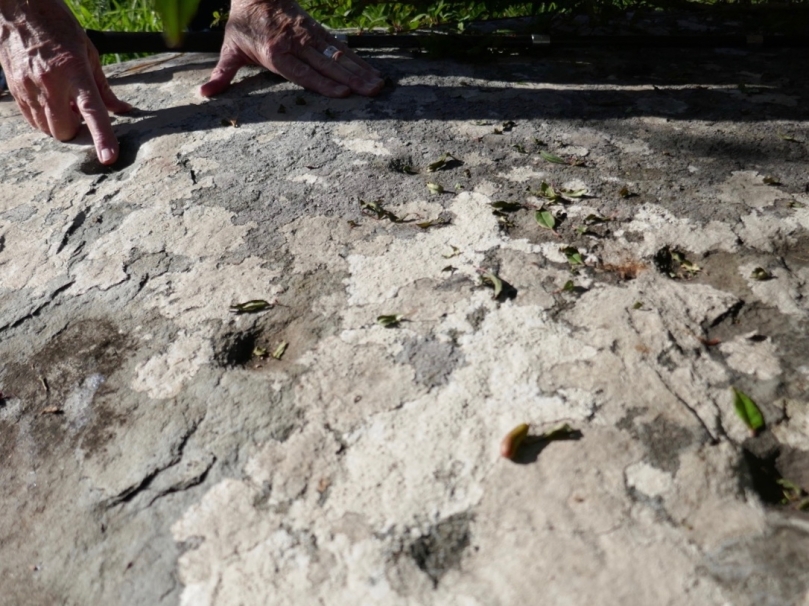 Our main mission was accomplished, but we couldn’t resist taking in some other historical sites while on the island. Firstly, we had a good look at the Franciscan friary – situated in the townland of Farranacoush – which has a colourful history. Here is a description from the current Irish Franciscans site:

. . . Permission for this foundation was given by Rome to Finighin O’Driscoll in 1449, but it was not until just after 1462 that the Observant friars actually arrived. The friary became the traditional burial place of the O’Driscoll’s. In 1537 the citizens of Waterford burned the building in retaliation for acts of piracy by the O’Driscolls. The great bell of the friary was on display in Waterford as late as 1615. There is no evidence to suggest that the friars were disturbed by the events of the Reformation until the island was garrisoned by the English following the Battle of Kinsale. The friars soon returned and, except at the height of the Cromwellian persecu­tion, were active all during the seventeenth and well into the eighteenth centuries. The last friar, Fr Patrick Hayes, died soon after 1766 . . . 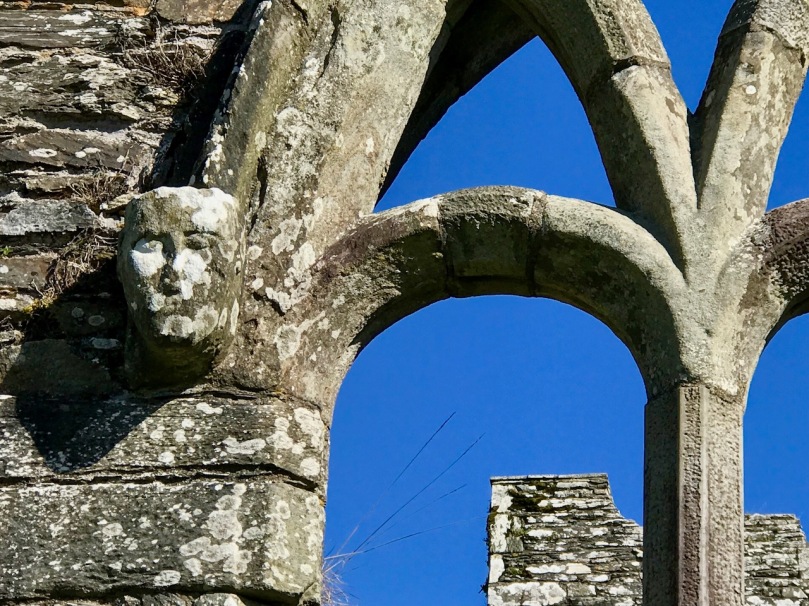 In the picture above – taken from the OPW information board – you can see the attacks of 1537 by ‘the citizens of Waterford’ on both the Friary (in the foreground) and the O’Driscoll stronghold of Dún na Long (beyond). The castle was subsequently partially rebuilt and was garrisoned by a Spanish force in 1601. It was then acquired and restored by the Becher family in 1655 and remained in their ownership until the late nineteenth century. We went to see what remains of the castle today. 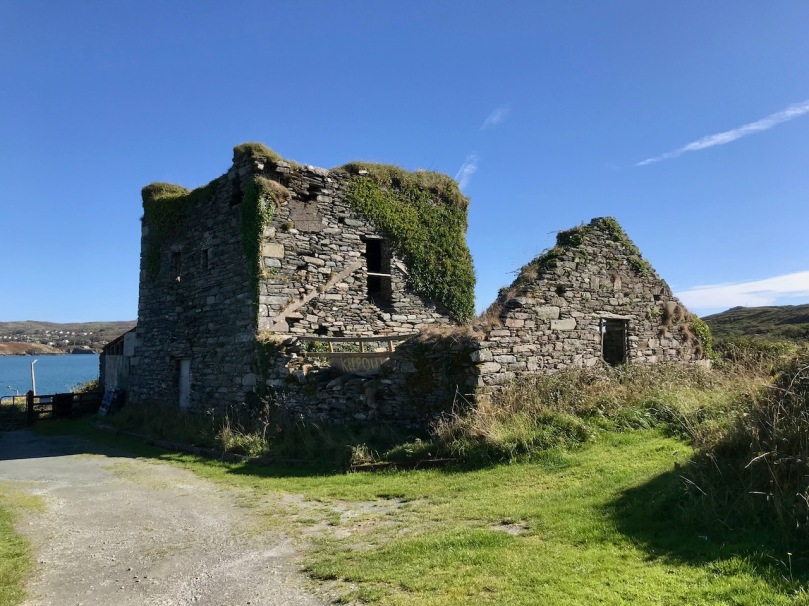 Our visit to Sherkin only took an afternoon – albeit a golden one. There’s plenty more to see there – and other islands to be investigated. And an endless exploration of history to be had in the landscapes of West Cork. 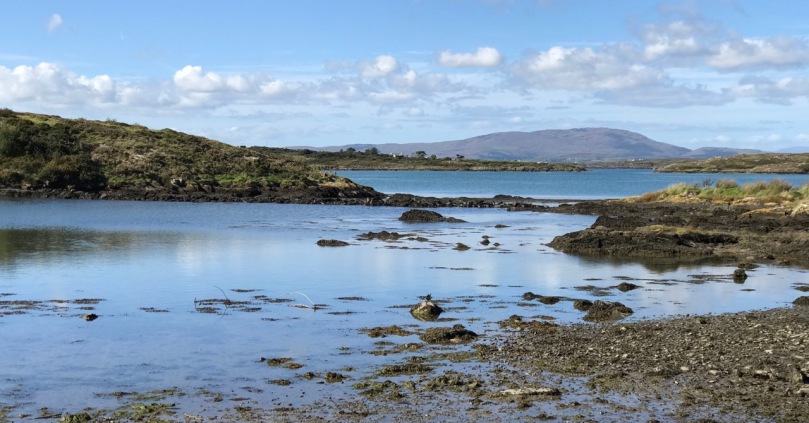