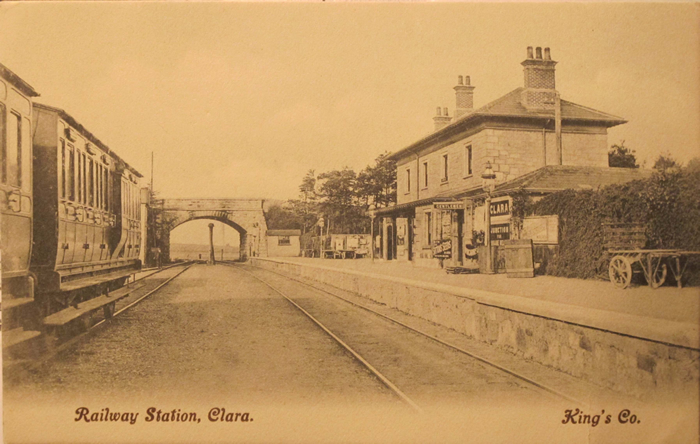 I was in the little two-horse train which labours west from Clara to Banagher and the outlook was desolate. There was another chap in the carriage. He sat hunched up in the corner with his nose to the window. One glance convinced me that it was useless to say anything and there the two of us kept on staring rather lovingly at a wilderness of bog stretching away to the Slieve Bloom Mountains. It seemed to me that there was a kind of promised land on the other side. On past a few scattered farm houses some grey boulders and the ruins of a church. I found myself thinking dismally enough of the tourists. After all what do they get? Just ruins, ruins and more ruins – the saddest ruins in Europe. Then suddenly I heard my friend of the opposite corner speak in a mournful kind of way with his nose still glued to the window – “That’s Leamanaghan, a quare kind of place, decent people, too, the best in the world, people who’d give you all the milk you could drink but wouldn’t sell a drop of it for all the gold in Ireland and it’s all by raison of a cow, Saint Manchan’s cow.” 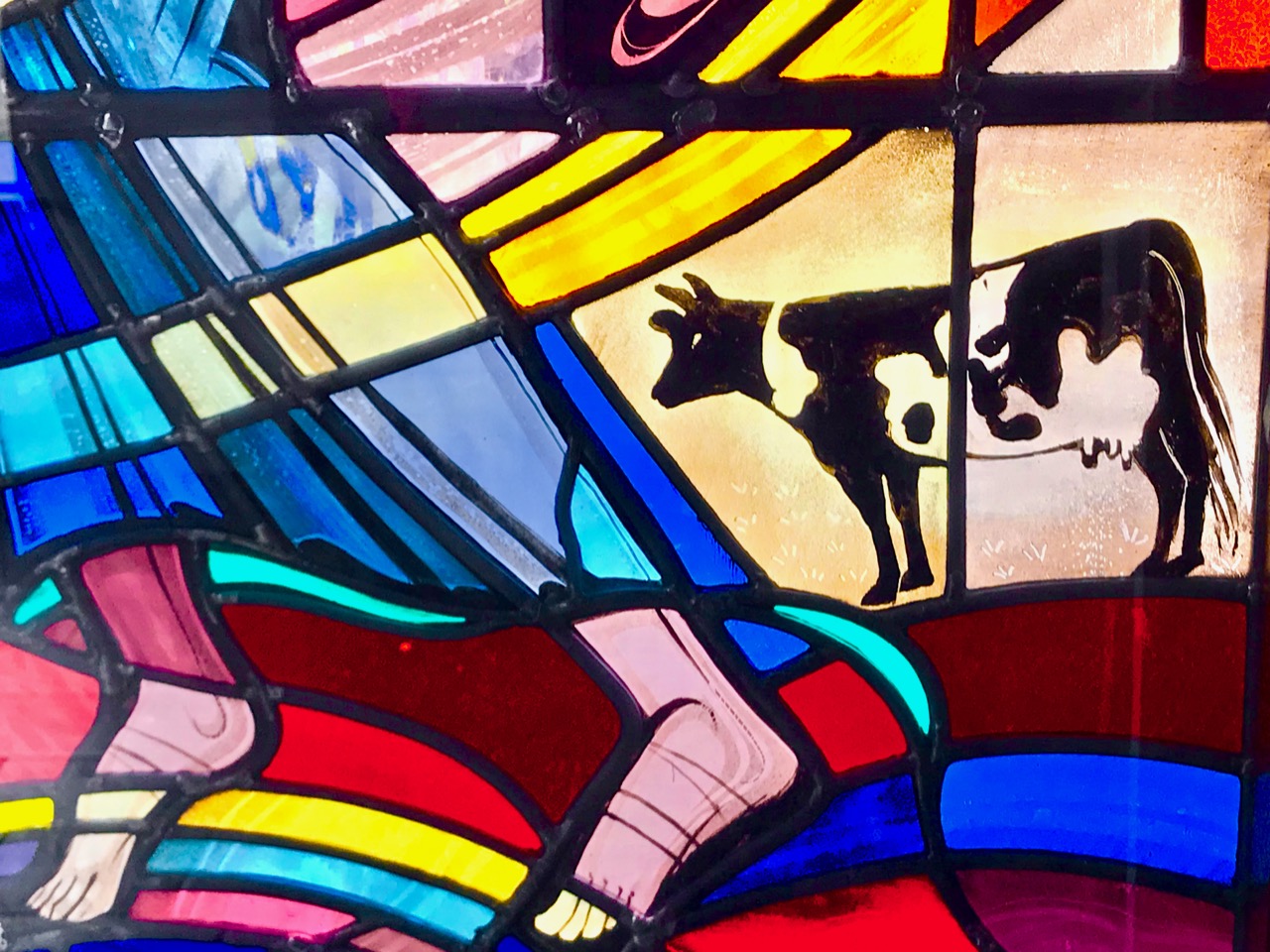 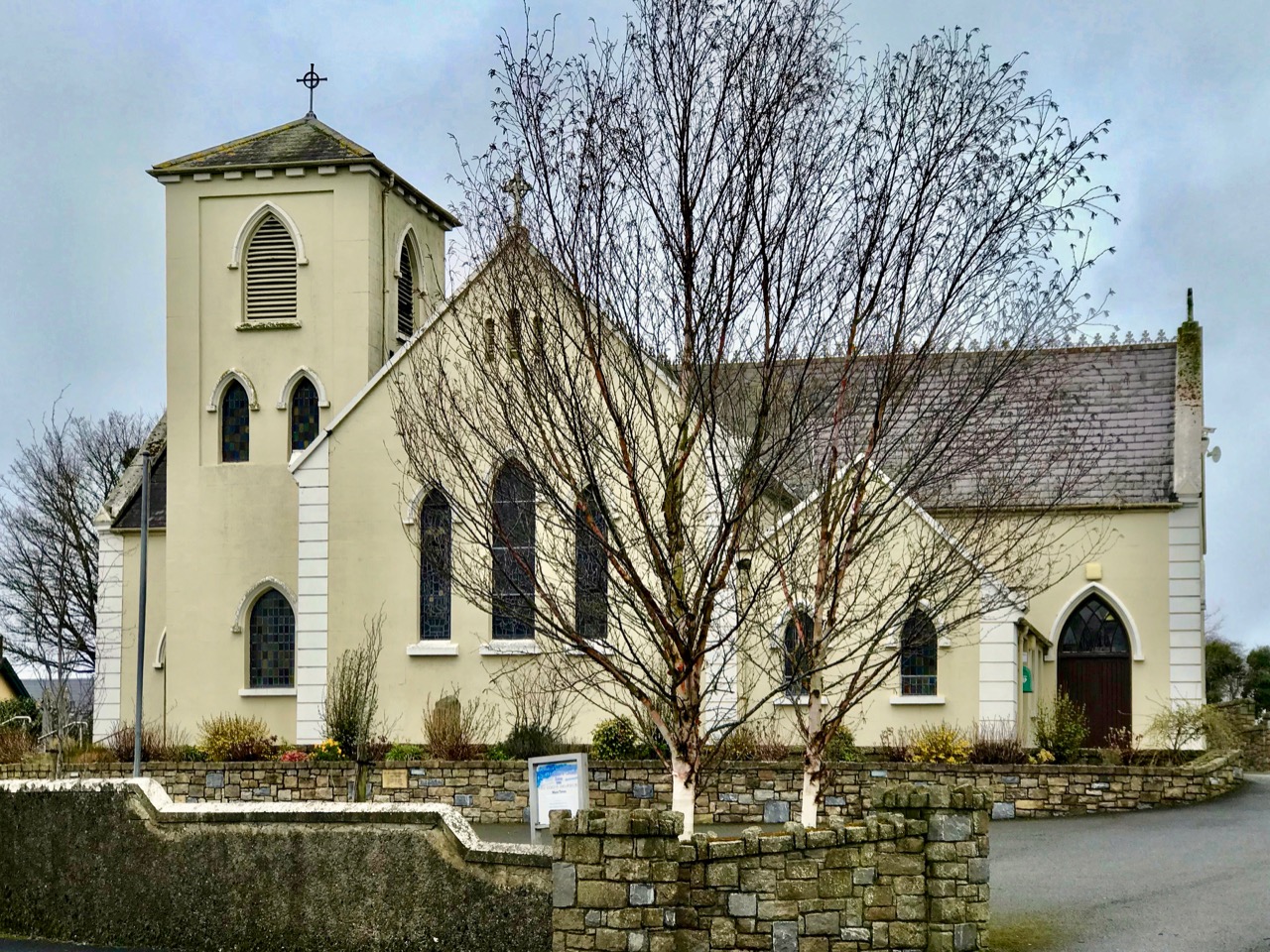 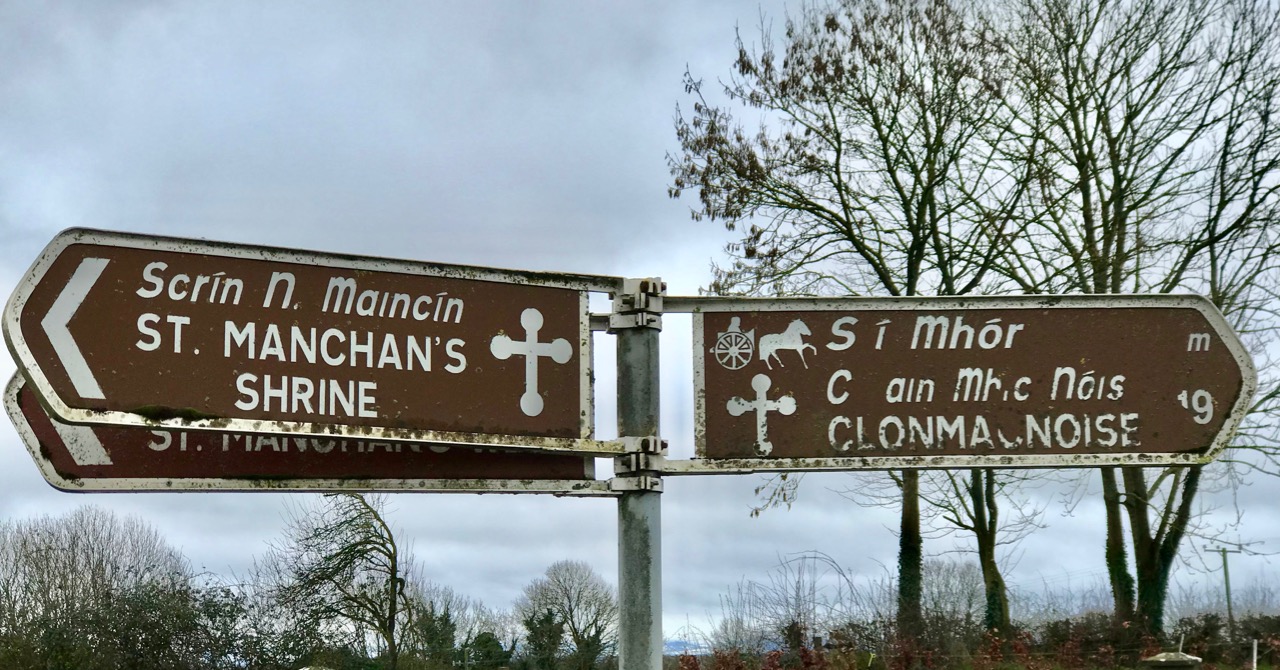 Upper – Finola is featuring the work of stained glass artist George Walsh this week. We were fortunate to find his portrait of Saint Manchan and his cow in the  little church at Baher , Co Offaly, on our travels. Centre – The Church of Saint Manchan

(From Robert’s diary, 2012) – St Manchan had a Cow, a miraculous animal that was always in milk, and the people of Leamonaghan had the milk for free (and, to this day, will not charge anyone for a pint straight from the herd). We tramped through a field of cows as we searched for St Manchan’s holy well: they gazed at us with some disdain. The well is a curious affair – old stones, concrete and rather ugly. The water is alive with tadpoles. We were tentative as we sampled the rank, slow moving stream – but it gave us the gift of credulity! 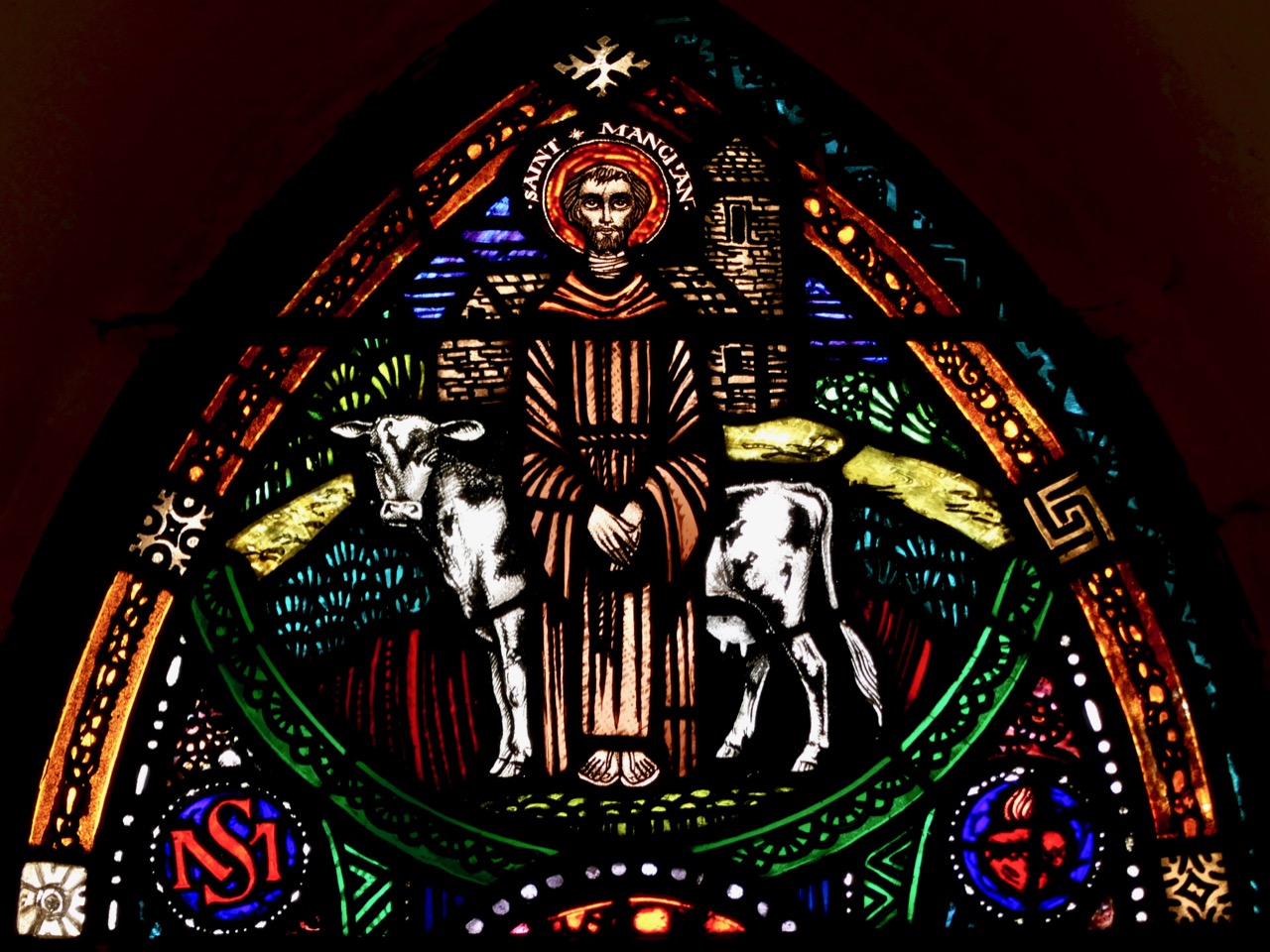 I went through a storm of real Irish rain to see Leamanaghan that very evening. It is four miles from Ferbane in County Offaly and hidden away in a vast bog region which is dotted with scattered boulders of magnesian limestone. The general depression is summed up in the name – Liath Manchan – the grey land of Manchan. Aye! The grey, lonely, chill land of Manchan. Saint Manchan lived here and died in AD 664. That might have been only yesterday, however as far as the good neighbours are concerned because he is the one subject over which every man, woman and child can get really voluble. I was taken to see the ruins of his church and then down to his well and heard how when you are sick you should pray here, walk three times round it and then go back and leave a little present for the saint himself in the window of the church . . . I was told that on the 24th January when all the rest of the world works, the people of Leamanaghan just take a holiday and make merry because it would be the unpardonable sin to think of work on their Saint’s day. 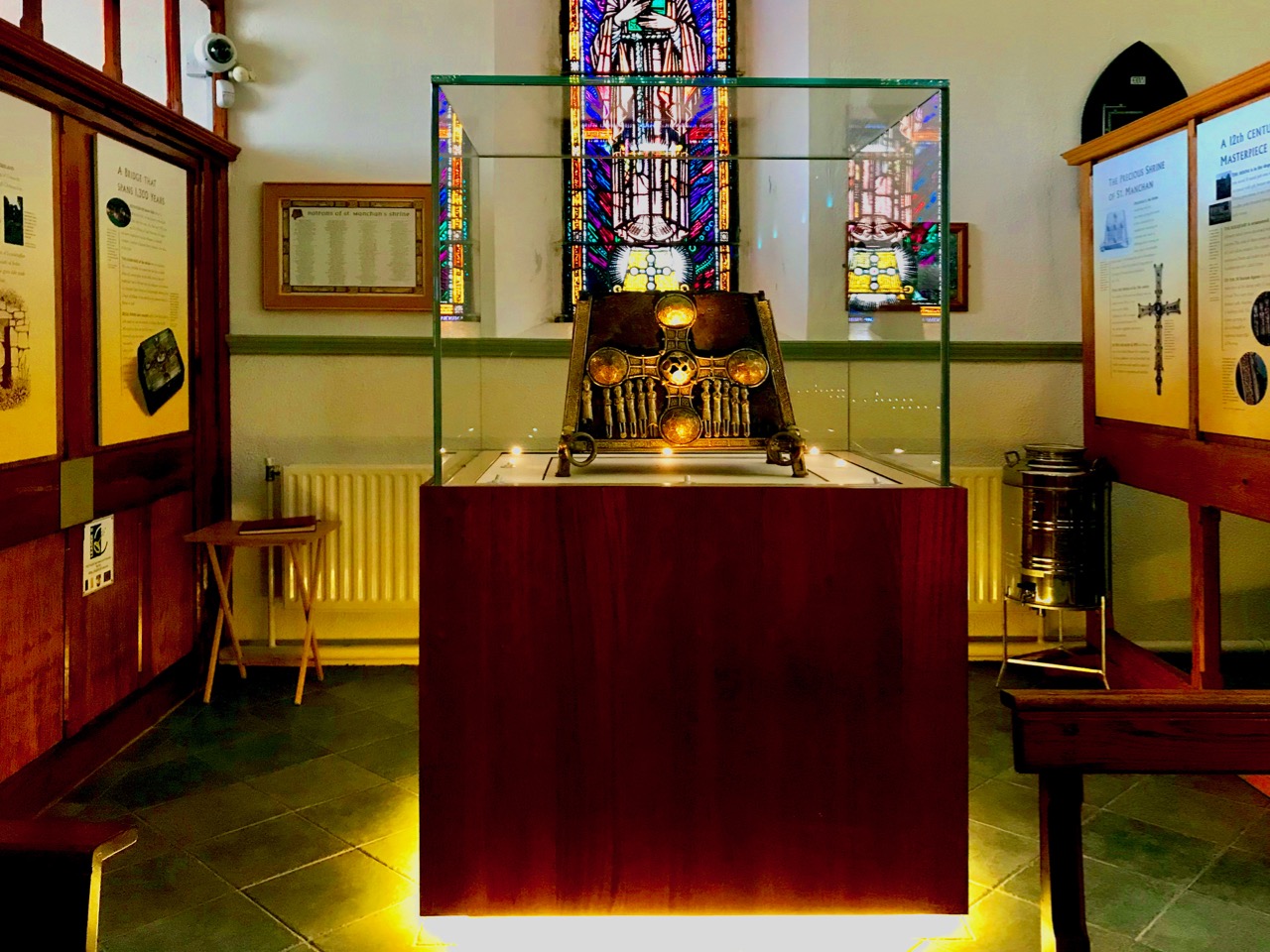 The twelfth century shrine of St Manchan securely displayed in the church today, with the Harry Clarke Studio window behind it

St Manchan died in a plague which he had asked God to bring on his sinning people. After his death, his herdsmen – Bohooly (from which the name Ua Buachalla – or Buckley – is derived) found it necessary to call upon the Saint to help recover the Community’s cattle, which had been stolen by raiders. Manchan duly appeared, but one of his faithful herdsmen was so overjoyed to see his old master again that he threw his arms around him. This he should not have done, as he was a mortal sinner: the Saint fell into a heap of dry bones, but the cattle were recovered. We learn that Manchan’s bones were gathered up and taken to Clonmacnoise, where a fine casket was made to house them, out of yew wood, bronze and gold. Nearly a thousand years later we stumbled on this same shrine in the little church at Boher which carries the Saint’s name, with a glorious representation of itself shining out from a Harry Clarke Studio window set behind it. It resided in a case of armoured glass, alarmed and watched by cameras  – incongruous…. and ineffective: the day after we saw it there the shrine was stolen in broad daylight, evidently after only a few minutes’ work. (Robert’s diary, 2012) 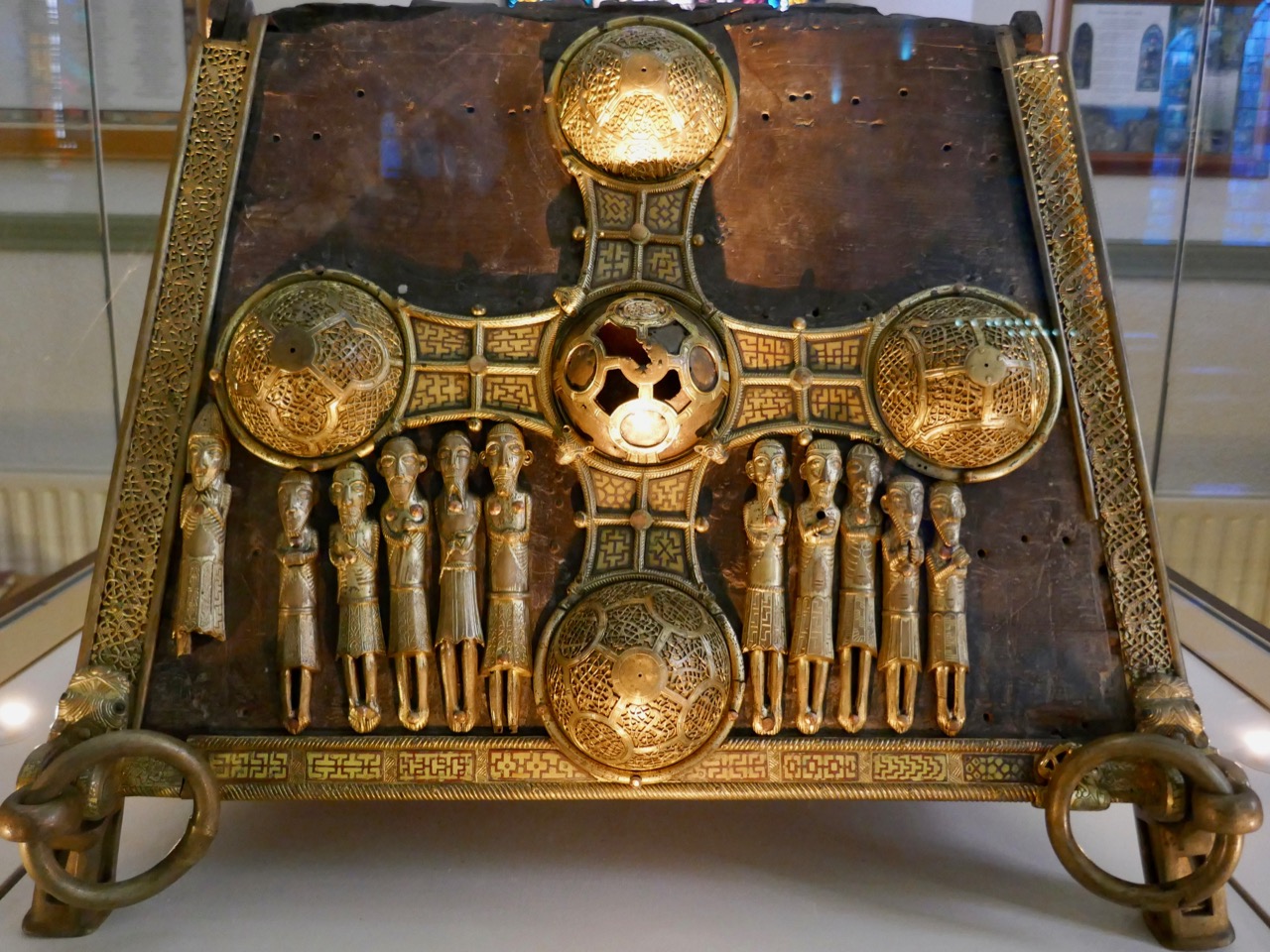 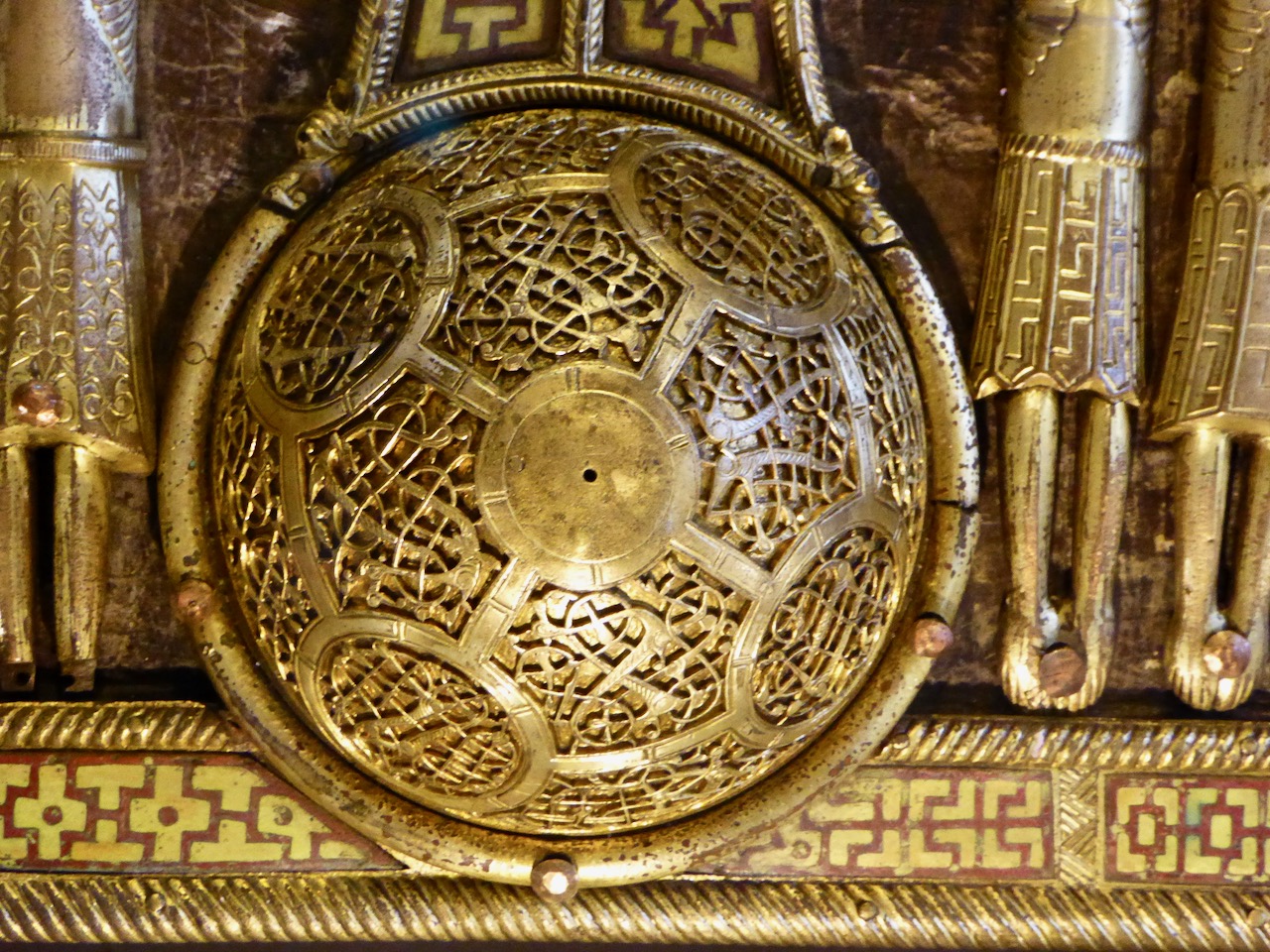 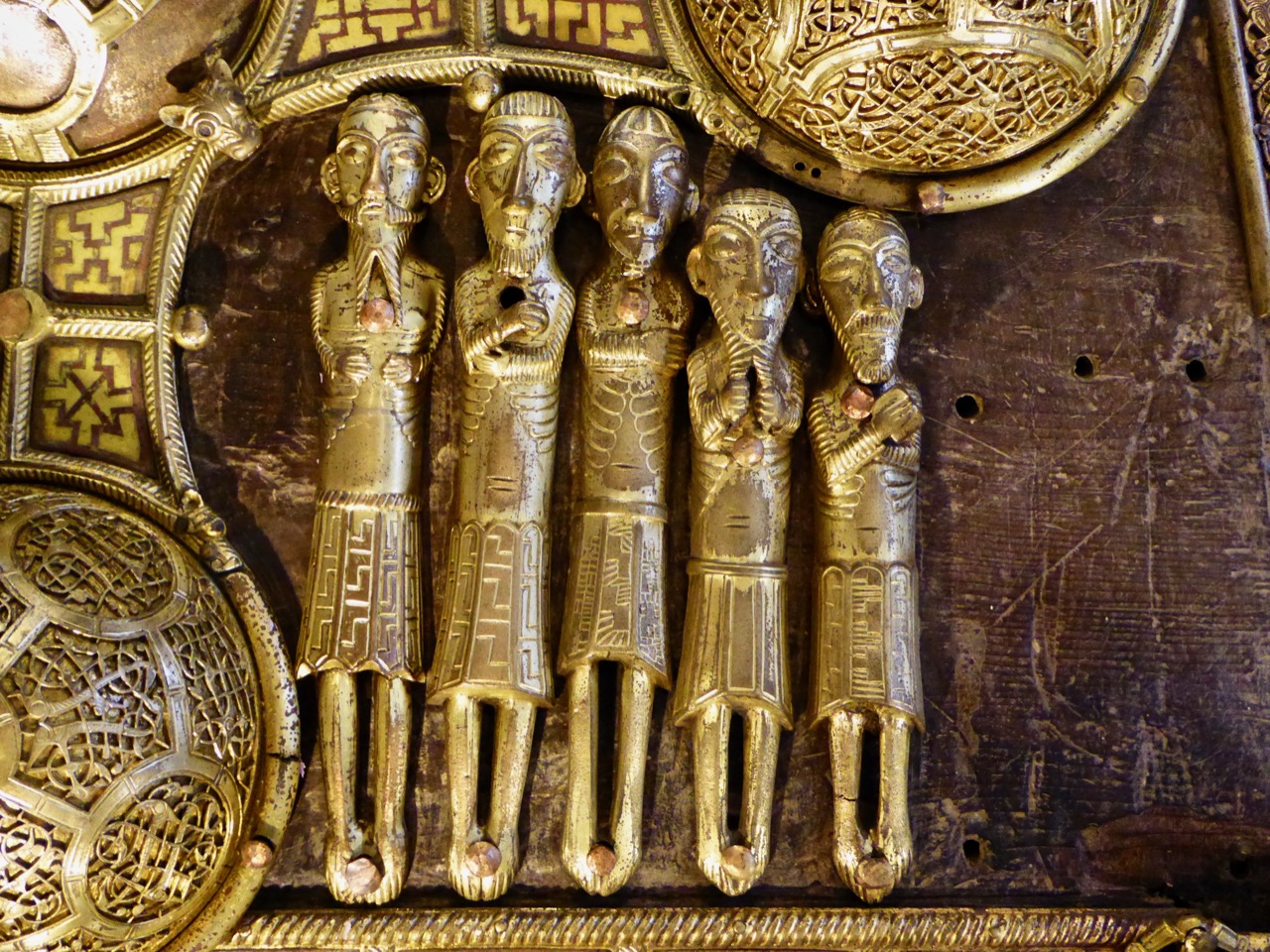 It’s wonderful that we can see the actual reliquary containing St Manchan’s bones returned to the church at Boher, Co Offaly, close to the ruins of the monastery at Leamonaghan which the Saint founded in the seventh century. Although it has suffered some damage over the centuries, the detailing is exquisite: it is one of Ireland’s finest medieval treasures

They have all kinds of stories about the good saint but the best one of them all explains why Leamanaghan people don’t sell milk. Here it is: Saint Manchan had a cow – a wonderful cow that used to give milk to the whole countryside – good, rich milk for which no charge was ever made by the saint. Then, the people of the neighbouring Kil Managhan got jealous and watched for their chance. One fine day when Manchan was absent they came and stole the cow and started to drive her along the togher through the bog back home to Kil Managhan. The good cow, suspecting something was wrong, went backwards and most unwillingly, fighting, struggling and disputing every inch of the way. Now she’d slip designedly on the stones: again she’d lie down but every where she went, she managed to leave some trace of her rough passage on the stones of the togher. The marks are there to this day, – hoof marks, tail marks – every kind of marks and the chef-d’oeuvre of them all has a place of honour at the entrance to the little school. Alas! In spite of that very gallant resistance, the cow was finally driven to Kil Managhan. There, horrible to say, she was slain and skinned. 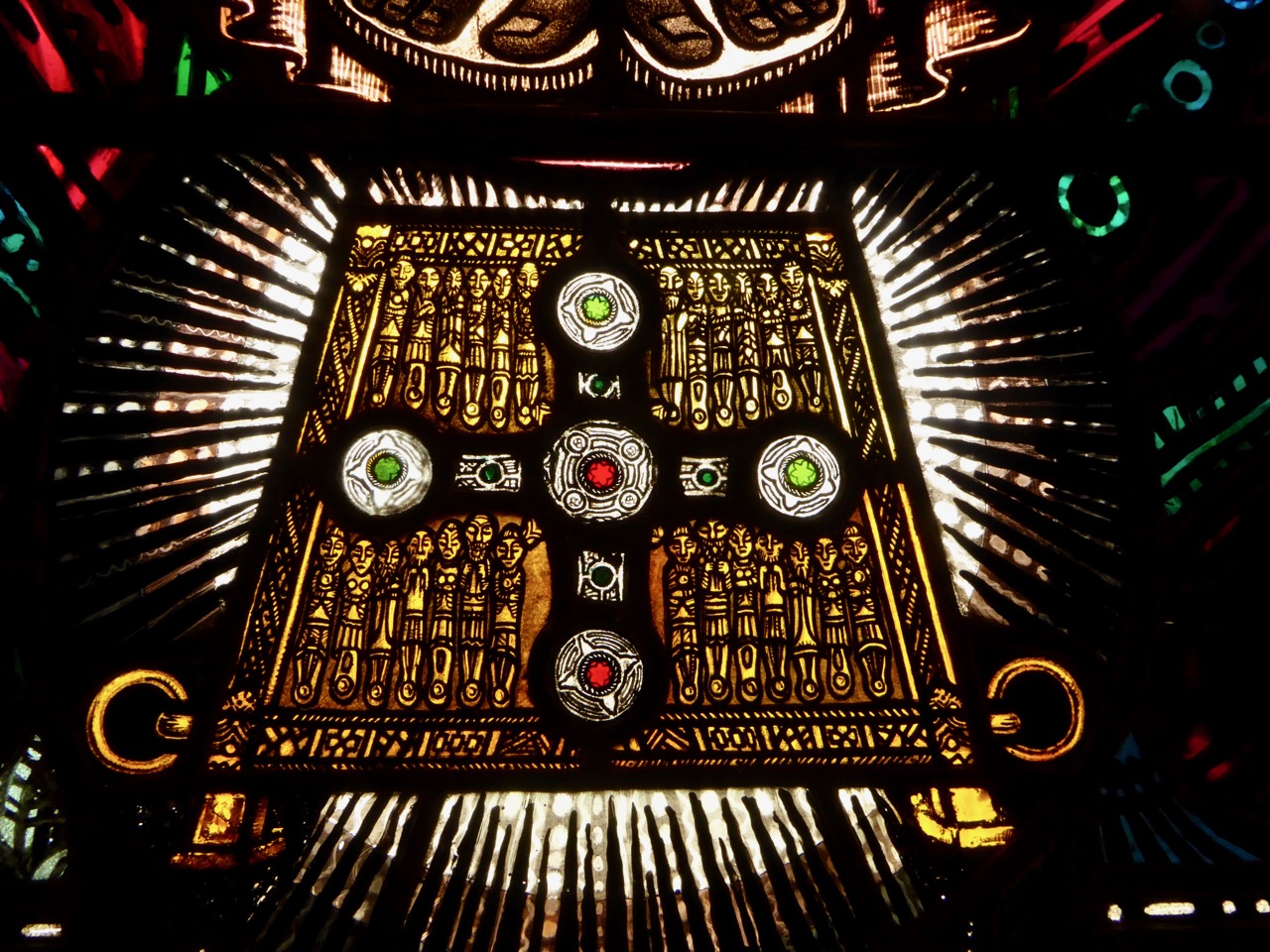 Prior to being housed in the church the shrine had rested in an ancient chapel. This burned down, but the shrine was rescued and then was kept in a thatched cottage nearby: legend has it that the ruin of this cottage became the unprepossessing holy well that we had found . . . Miraculous cows; plagues; holy wells; a modern theft – St Manchan’s bones do not rest lightly in his casket. The stories tell that Manchan was a tall man with a limp. When the shrine was sent to the British Museum some years ago for refurbishment, the experts examined the bones and proclaimed that they belonged to a tall male who had suffered from arthritis. (Robert’s diary, 2012) 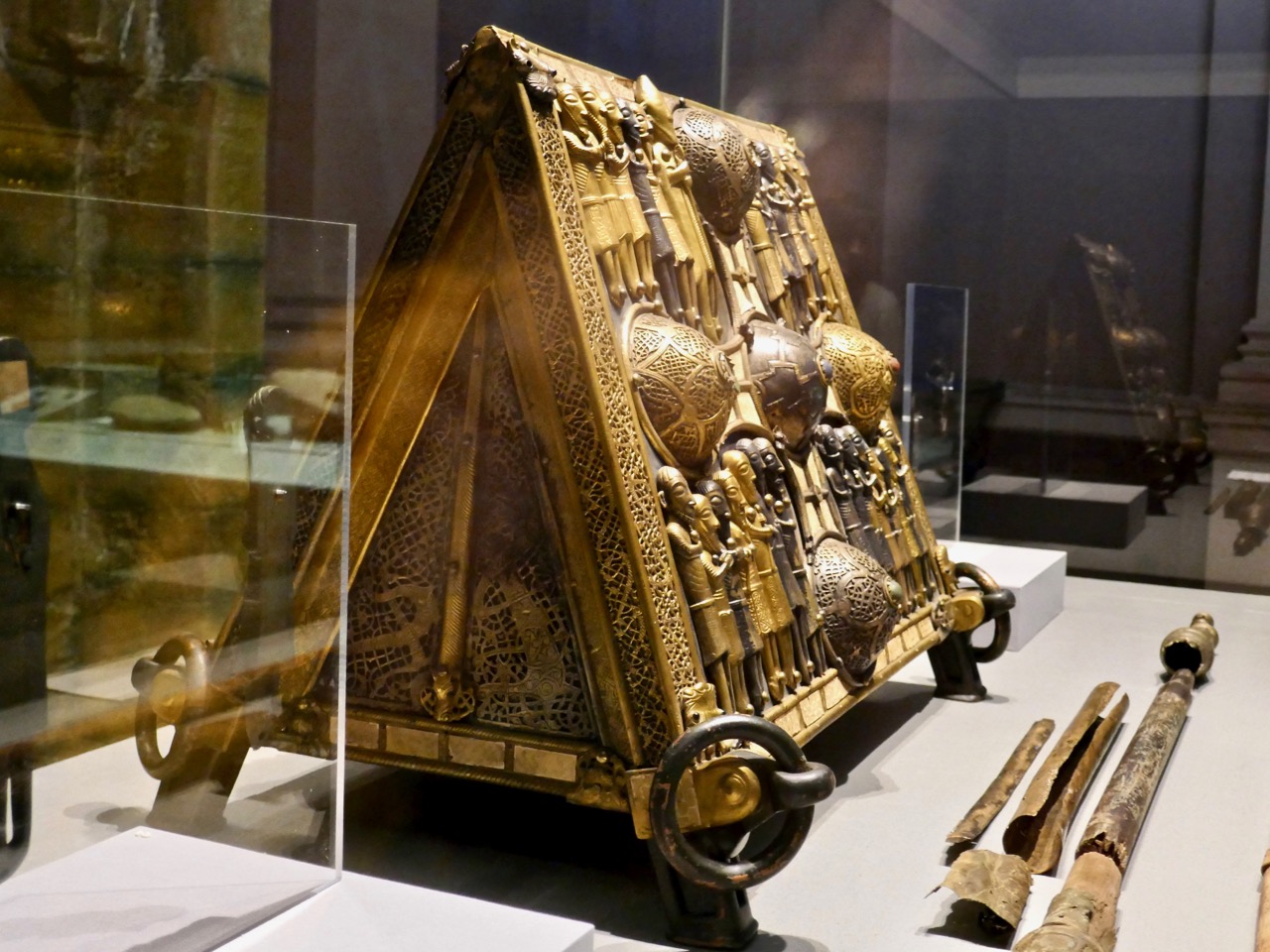 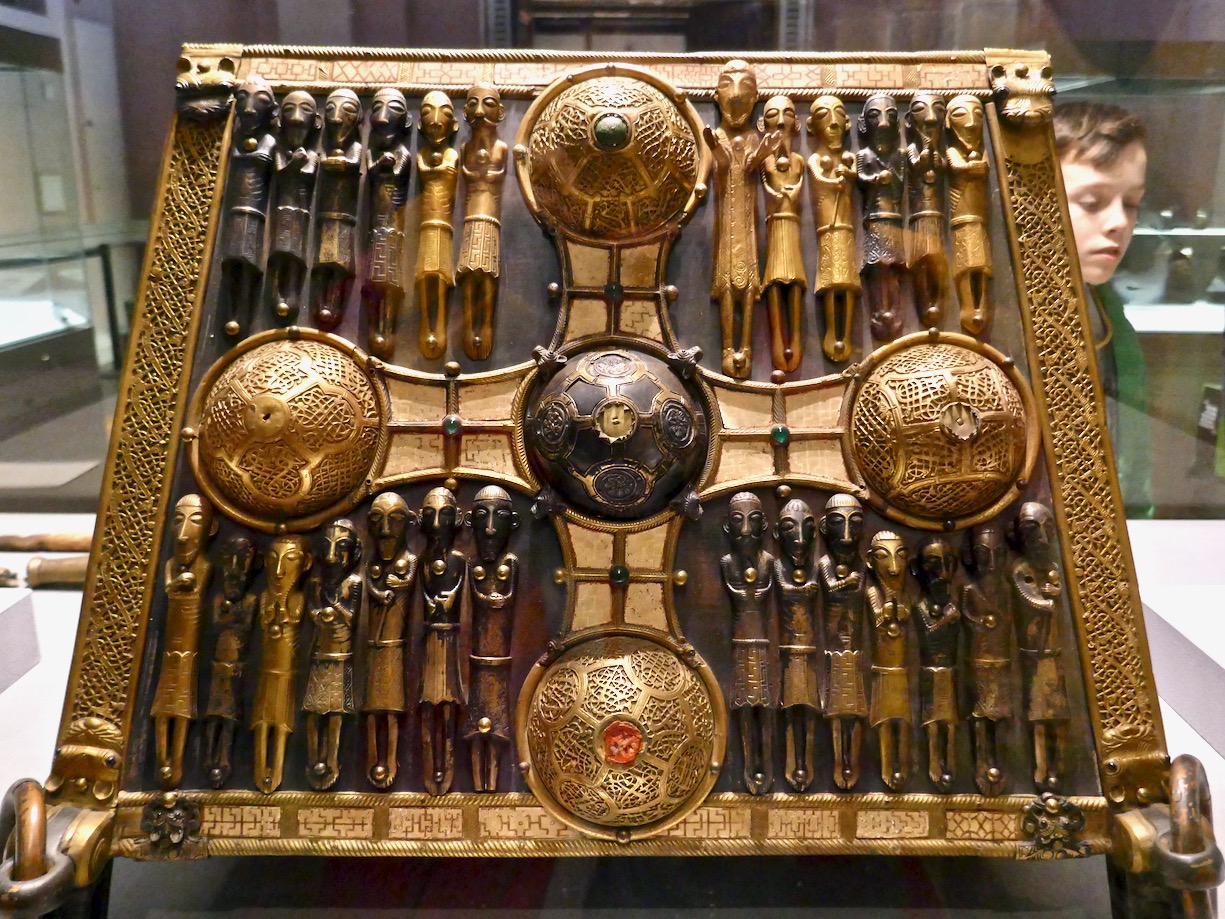 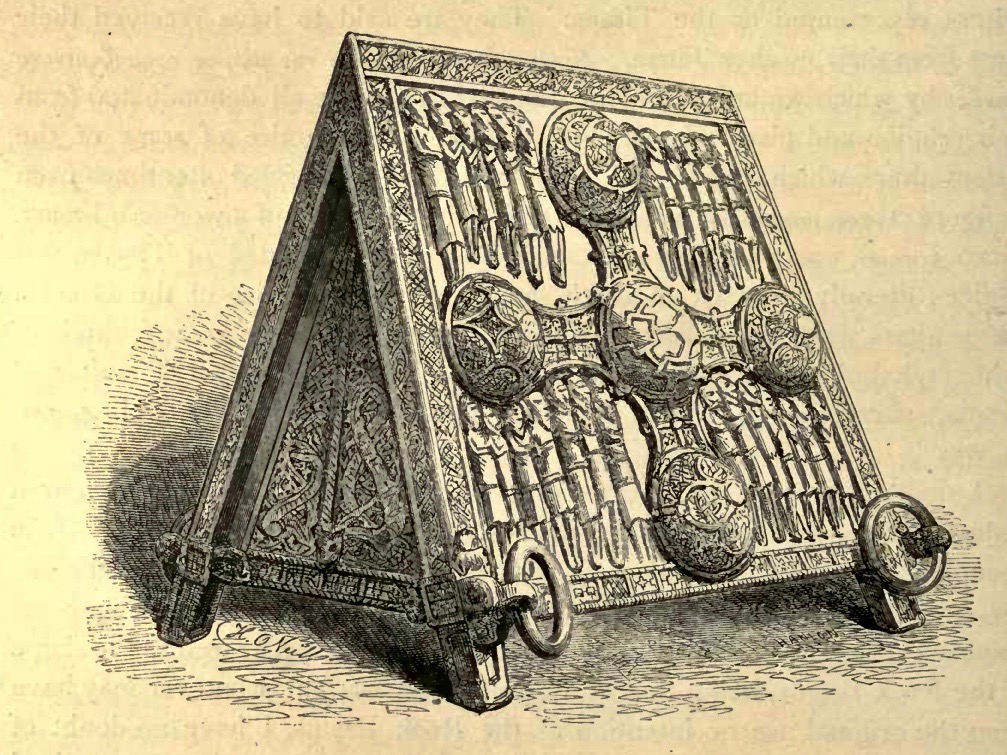 Remarkably, St Manchan’s Shrine has been exactly replicated. This full-sized copy of the reliquary is in the National Museum of Ireland: all the ‘missing’ figures and details have been restored. The drawing dates from 1867, and is a plate in a book titled The Towers and Temples of Ancient Ireland by Marcus Keane MRIA. In that book it is said that the copy belonged to Sir William Wilde, and it may well have been commissioned by him. It is likely that the Harry Clarke Studio modelled their version of the shrine on the replica, rather than on the original

In the meantime, the saint returned, missed his cow, and straightaway started in pursuit. He succeeded in tracing the thieves by the marks on the stones and arrived just at the moment when she was about to be boiled. He carefully picked the portions out of the cauldron, pieced them together, struck at them with his stick and immediately the cow became alive again. She was every bit as good as ever, too, except that she was a wee bit lame on account of one small portion of a foot which was lost. She continued to supply the milk as before, and, of course, no charge was made by the saint. Ever since the famous custom still lives on, and good milk is given away but never gold by the loyal people of Leamanaghan. Now, can any lover of the grand faith of Medievaldom beat that? 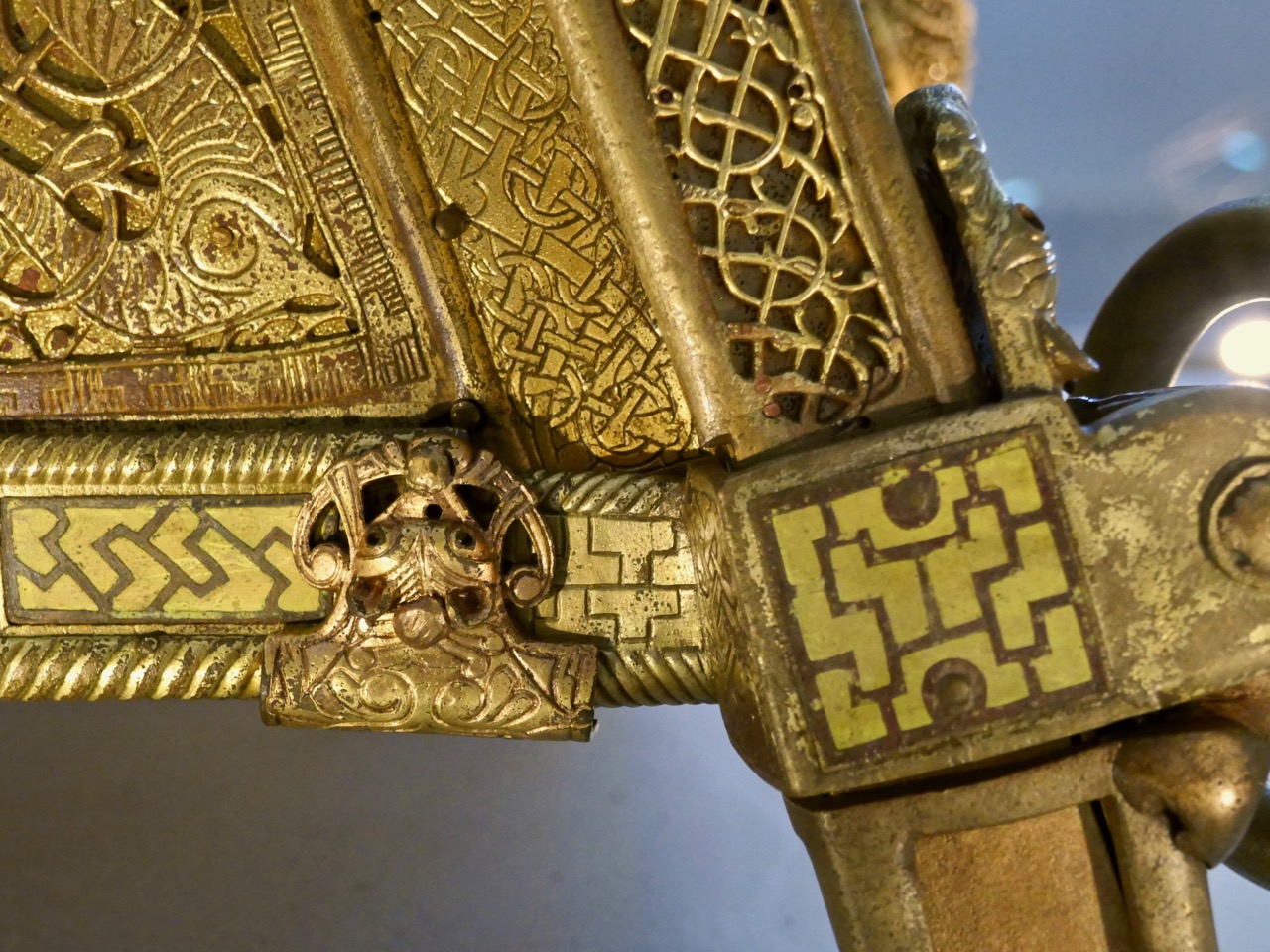 A detail of the original Shrine in St Manchan’s Church

There’s one more piece to this Saint’s story: the fame of his miraculous cow grew and the people of neighbouring Kilmonaghan were jealous, and sent out some rustlers to drive the cow over into their own parish. The cow proved reluctant and stalled and slipped all the way, leaving hoof marks on the many stones that lay on the road. Those marks are still on the stones to this day (they say) and the Saint was able to follow her tracks and recover her. (Robert’s diary, 2012) 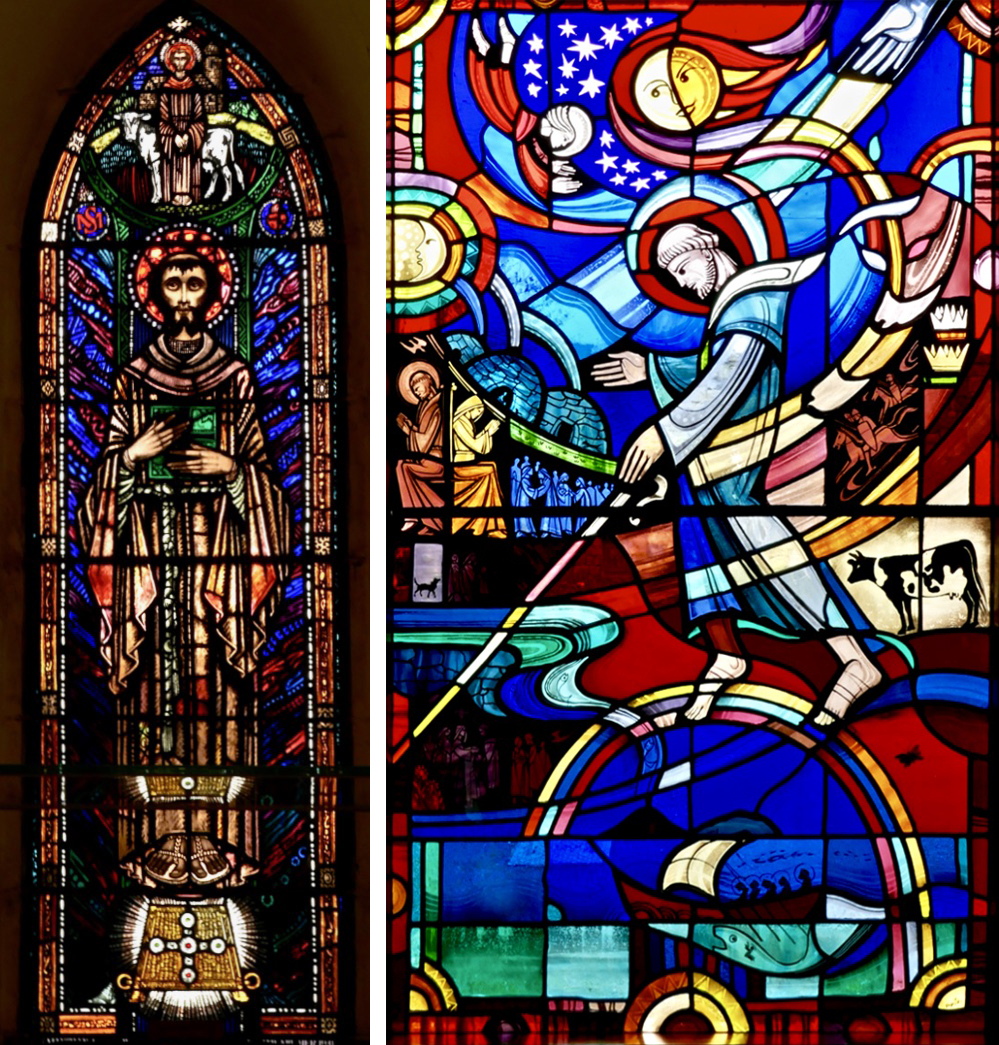 Saint Manchan, depicted in stained glass: Harry Clarke Studio (left) and George Walsh (right). Both can be seen in the church at Boher, Co Offaly

The very old vellum books state that Manchan of Liath was like unto Hieronomus in habits and learning. I can well believe it. Some distance away from the church is the little rectangle cell which he built for his mother – Saint Mella. Cold, austere and with no window, you get the shivers by even looking at it. There is also a large flag-stone on the togher leading from the well, and they say the saint and his mother used to meet here every day and sit down back to back without speaking a word because the saint had vowed never to speak to a woman! 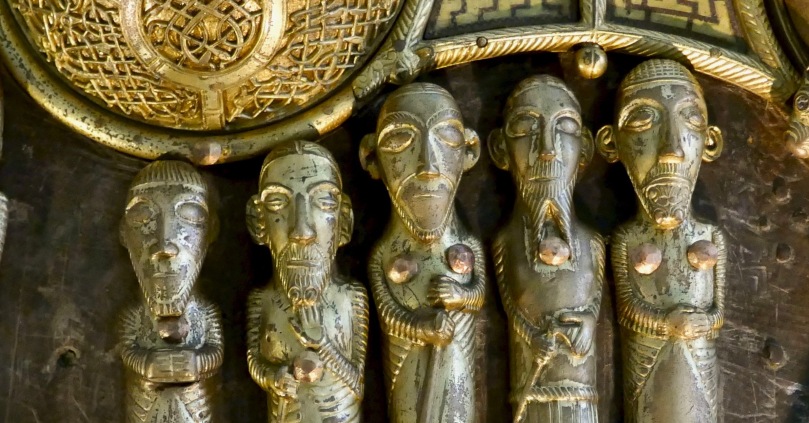