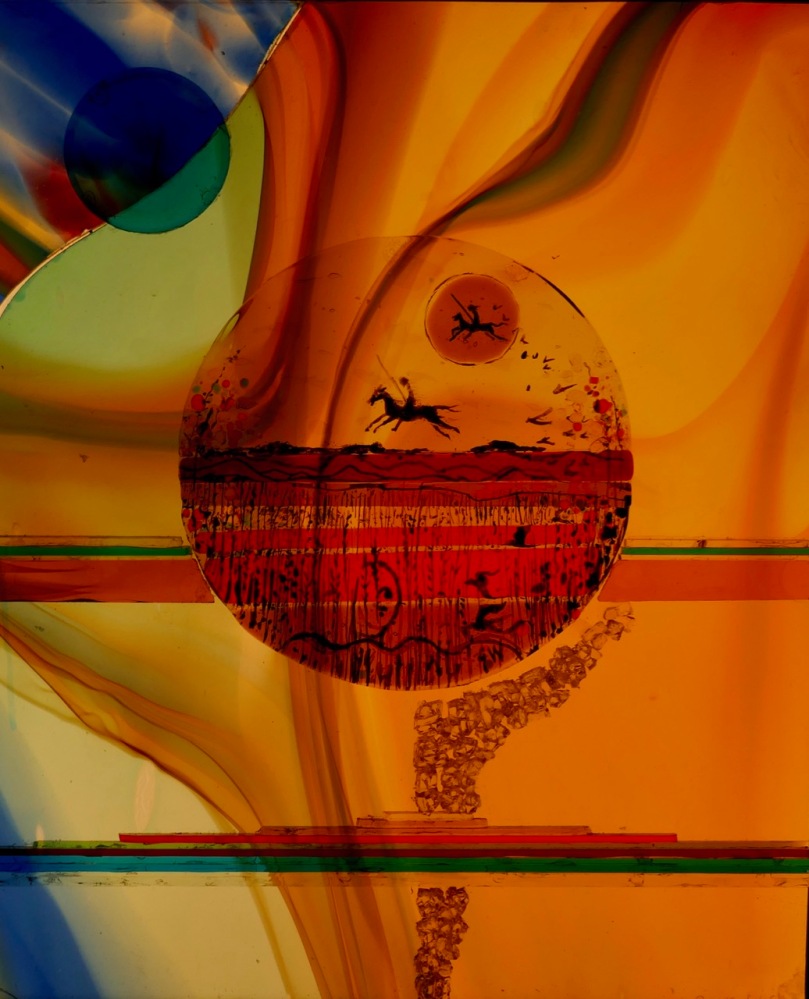 Robert and I are just back from a magical celebration in Dublin – the launch of a solo show by the stained glass artist George Walsh, at the Trinity Gallery. It was a joyful occasion and a huge success. As one of the organisers said afterwards, “It’s a long time since there was a queue outside a Dublin gallery for an exhibition.” The piece above, Ancestral Fields, is a good example of the vibrant and glowing glass – stained, fused, painted – on display.

At the exhibition opening at the Trinity Gallery: Imelda Collins and Loretto Meagher, Gallery Owners, Janet and George Walsh, Yours Truly and Eamonn Mallie (Photo by Stephen Walsh)

This month, my piece on George was published by the Irish Arts Review – I have been waiting for that to come out, and for this exhibition to open, before I write too much about him in the blog. It’s been difficult to sit on it all, because I’ve been studying his work seriously now for a couple of years, growing more and more entranced with every window.

The March 2019 Irish Arts Review, featuring my 6 page article about the art of George Walsh

Regular readers of the blog, or our Facebook Page followers, will recognise George’s work right away from the occasional image we share on either platform. We ‘discovered’ him on a trip to the Beara five years ago, and have been encountering his work all over the place ever since, initially by chance and more recently as part of a concerted effort to document his body of work for a specific project – more on that project later.

Saints, from a window in Kilcummin, near Killarney

Researching and writing the Irish Arts Review article has been a fascinating journey, as it involved capturing images of George’s work, interviewing colleagues and gallery owners, and most of all getting to know George and Janet as I peppered them with questions and as Robert and I spent time in their company.

George apprenticed with his father who, in turn, had apprenticed under Harry Clarke. They (father and son) worked together and separately both in the United States and in Ireland, producing wonderful windows for several studios and finally, in George’s case, settling down in Ireland and going out on his own. George’s son, Stephen, also an artist and currently living in London, is developing a website to showcase George’s work – visit it here as a work-in-progress – and also runs an Instagram feed full of gorgeous images.

George is inspired by Venice – another exhibition piece

George has collaborated with several architects to design and decorate new churches. His work with Holly Park Studios is breathtaking, demonstrating as it does what can be achieved when a project is conceived with stained glass as an integral part of the design from the start.

This screen door is but one of the stained glass pieces in the award-winning Church of the Holy Family in Belfast designed by Holly Park Studio. The mosaic flooring is by ceramic artist Laura O’Hagan, whom I was delighted to meet at the opening

But even where windows have been added over time (as is more normal in church architecture) George’s work shines and is instantly recognisable. First of all, his windows blaze with colour. What I have discovered by spending time with them is that he has this amazing ability to convince you that he is using primarily bold and primary colours but in fact any section taken at random in any of his windows reveal a host of colours, many of them subtle and gentle – it’s the way his choices of colour combine that result in the vibrancy and energy that are so typical of his windows.

The second thing is his complete mastery of his chosen artistic medium – glass. Perhaps this is best revealed in the complexity of the leading. Only an artist that has been classically trained in stained glass techniques could produce such incredibly complex images. 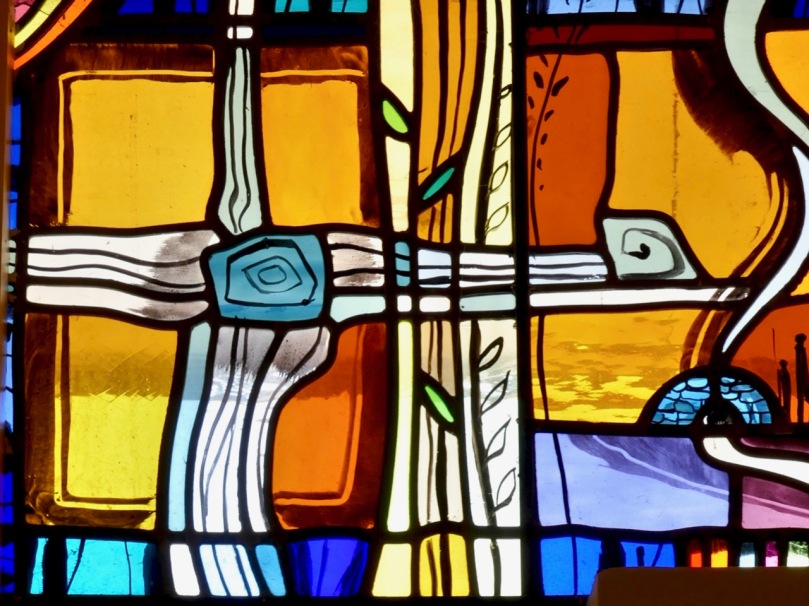 Larger expanses of a single colour (always painted and textured in subtle and not-so-subtle ways) are balanced by areas of the window is which each colour is a tiny sliver of glass, all cut and shaped in different ways and all leaded together to produce a final exciting effect. Just this week I stood in front of a Last Supper (below), which George had decided to depict in a field of wheat. The wheat occupied more than a third of the window and I estimate that it contained hundreds of different pieces of glass, all separated by twisted and swirling lead lines. it spoke to a level of skill and experience, a practice of perfectionism, and an acceptance of nothing less than the full realisation of the vision that only dedicated artists attain. 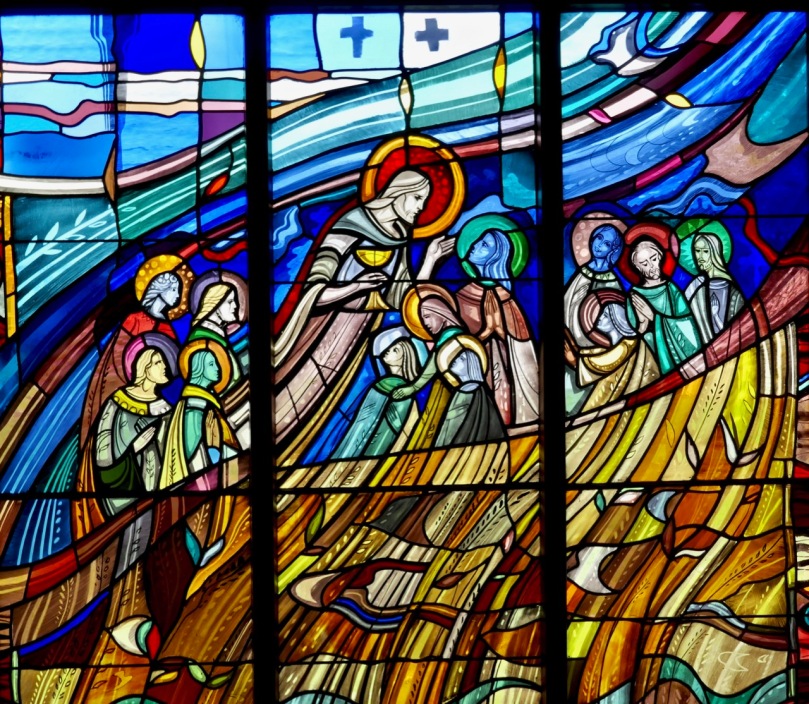 Finally, he is as comfortable with the transcendent as he is with the everyday. While most parishes want specific sacred images, he also makes himself familiar with the area so he can convey that sense of place that is so characteristic of his windows. 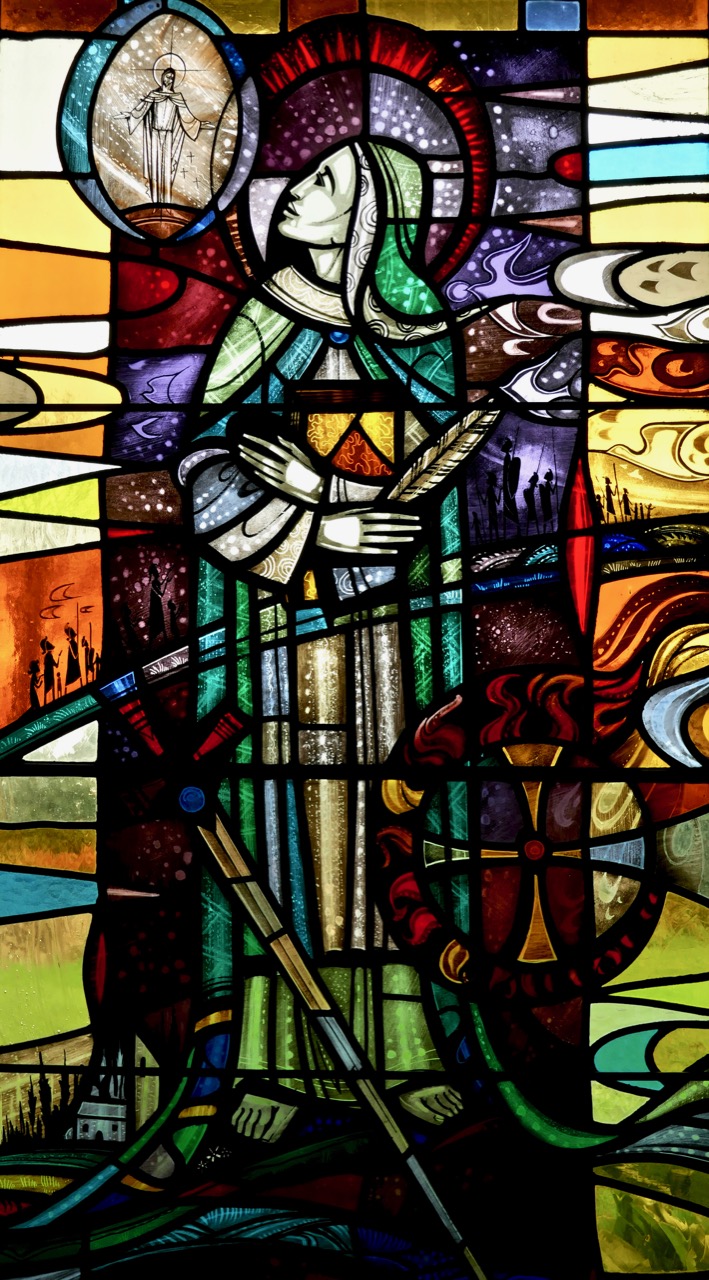 Above: Moses in the basket, Galway Cathedral. Below: St Catherine of Alexandria, from St Maur’s Church in Rush, Co Dublin. Catherine is shown with her usual attributes – the martyr’s palm, the sword which was the instrument of her death and the wheel which was used to torture her. But the Catherine Wheel is also a firework – called after St Catherine’s torture wheel, and George has introduced a subtle reference to that in his depiction of the wheel

He loves to add in quirky little items that keep you searching through the windows for things that make us smile – pterodactyls and construction cranes, butterflies and elephants, rats and hares, flowers and insects, beehive huts and Brendan with his whale, a postman on a bicycle, water that flows from window to window around the church. 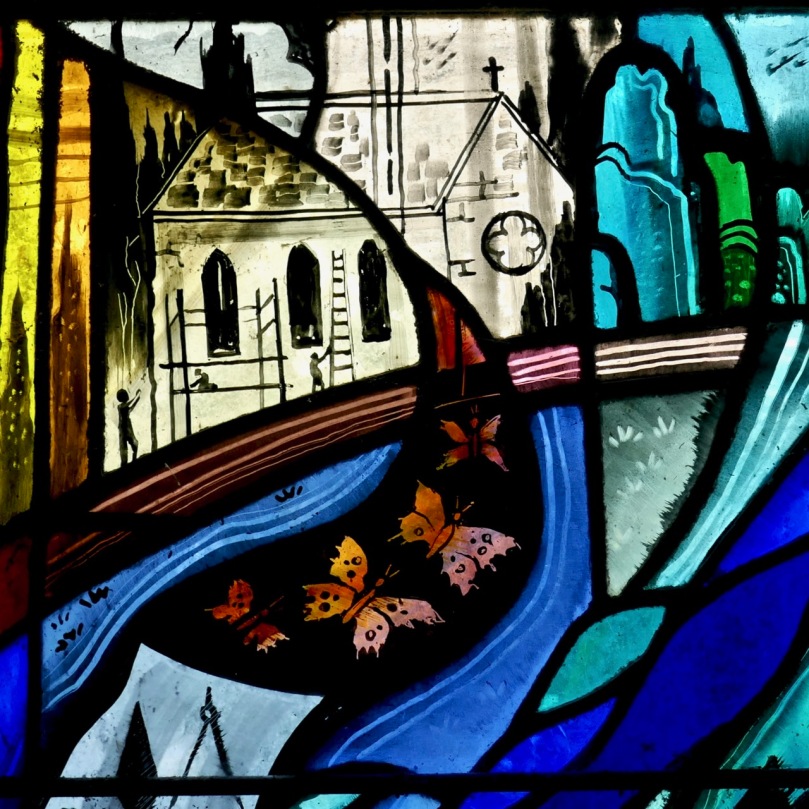 Above: A reference to church renovations. Below: A mouse and a fly are both characters in the story of St Colman Mac Duagh, and these little critters are from his Kilmacduagh window in Tirneevin, Co Galway

Lately I have come to recognise his model for his Madonna and Child images – in one of his explanations of his windows he refers to the “tender figure of motherhood” and that is exactly what he captures – and the Marian figures always manage to look remarkably like Janet.

And the ultimate project? My friend and relation-by-marriage, David Caron, is bringing out a second edition of the Gazetteer of Irish Stained Glass, and George is to be included. The first edition, long out of print, was written by David, and by Nicola Gordon Bowe and Michael Wynne, both of whom have passed away. The original Gazetteer listed the works of Harry Clarke and the artists associated with An Túr Gloine (The Tower of Glass). David will update this with a listing of artists of the mid- and late-twentieth century who chose to work in stained glass (many of them worked in other media as well) and who made a significant contribution to the art form. 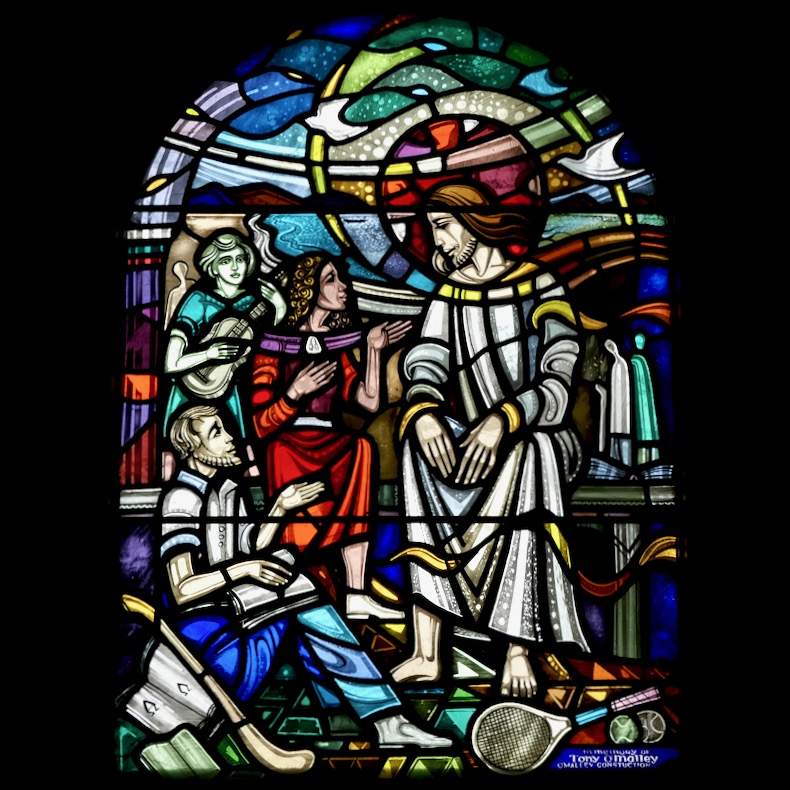 This window is in the National University of Ireland, Galway, Chapel of St Columbanus. It depicts a conversation or debate between students and God

If you’d like to follow David’s progress, he maintains a great Instagram feed as he tracks down stained glass windows all over the place. It’s at Irish Stained Glass and it’s always got something new! 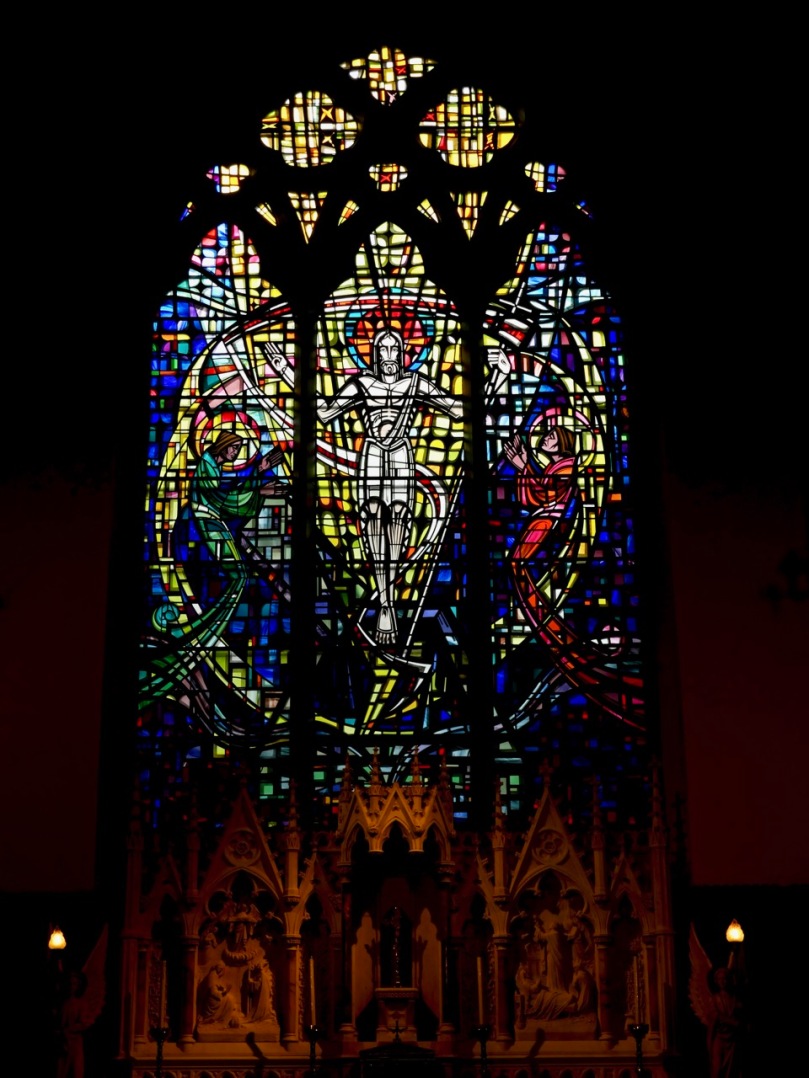 Some of George’s windows are simply enormous. This one is in the Augustinian Church in Galway City

I have taken on the task of documenting George’s windows for this new edition. I’m only part way through my quest – I have several more on my list and keep discovering new ones all the time. George has been amazingly prolific, so much so that he hasn’t kept track of all his windows, so if any of you out there know of any, let me know. I don’t think you will have any difficulty recognising a ‘George Walsh’ if you find one!

George, Imelda and Loretto outside the Gallery (Photo by Stephen Walsh)

Drop into the Trinity Gallery on Clare Street in Dublin if you are in the area – the exhibition runs until the 19th of March. But if you can’t make it to that, there are at least two examples of his work in West Cork – the famous Eyeries windows that turned us on to all this in the first place, and a more recently discovered set in the little country church of Darrara, near Clonakilty.

I will leave you with one of George’s exhibition pieces, below, just to remind you that there is more, much more, to stained glass that what we see in churches. It is a complex medium, difficult to master, but so rewarding in the hands of a true artist/craftsman. This one was titled Masks and reflects his love of all things Venetian.