On Stephen’s Day we went up to Fingal County to see the Mummers – it’s a mere hare’s leap from Nead an Iolair. Until 1994 there was no county of Fingal: the area was part of Greater Dublin. Since that time this county has recorded the highest birth rate and population increase of any community in Ireland. Why? I would like to suggest that it’s because Fingal has , for countless generations, been the home of a Mummers tradition.

On our new green last evening here was presented the drollest piece of mummery I ever saw in or out of Ireland. There was St George and St Dennis and St Patrick in their buffle coats and the Turks likewise and Oliver Cromwell and a doctor and an old woman who made rare sport till Beelzebub  came in with a frying pan upon his shoulder and a great flail in his hand threshing about him on friends and foes, and at last running away with the bold usurper whom he tweaked by his gilded nose – – and then came a little Devil with a broom to gather up the money that was thrown to the Mummers for their sport. It is an ancient pastime they tell me of the citizens . . .

This account of Mummers in Cork is supposed to date from 1685, and is found in a manuscript collection in the Library of Trinity College Dublin, lodged by Thomas Crofton Croker in the 1840s. It is probably the earliest recorded portrayal of the custom in Ireland or Britain. Three hundred and thirty four years after this description of ‘an ancient pastime’ was written down, recognisably the same ‘mummery’ is happening every year across these islands around midwinter. 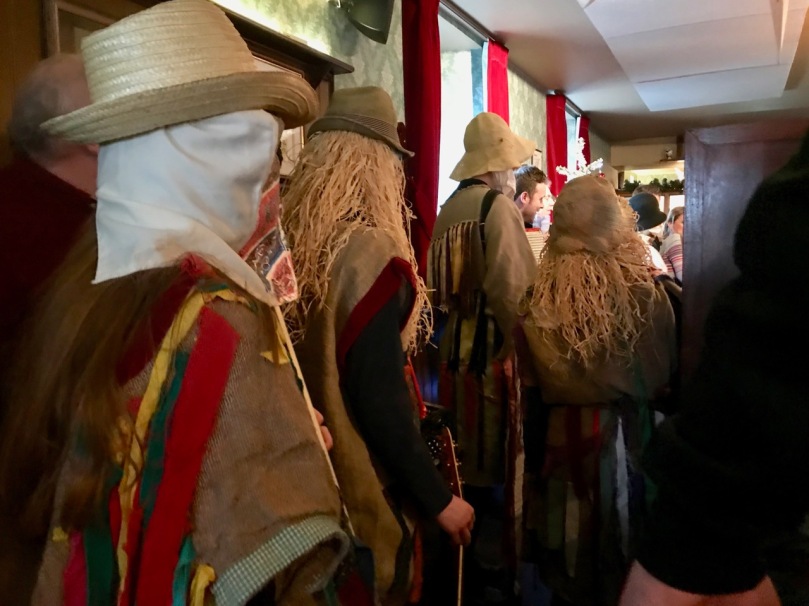 The Fingal Mummers ‘entering in’ (above). Following a revival in the 1950s, this group travels around several towns and villages on Stephen’s Day, performing their play to crowds who gather to see them. We tracked them down to their starting point, O ‘Connors Inn, Ballyboughal, which seemed a quiet little settlement until we walked through the door of the pub and realised that every resident of the village – and quite a contingent of visitors – was crammed inside waiting expectantly for the visiting players. The excitement was tangible, and everyone was in good spirit, enjoying the Christmas cakes, puddings and treats that were being freely handed around.

It seemed that the visit to O’Connors was a purely ritual appearance, as the crowds and the noise were too overbearing to permit a performance of the play. There was music and singing, but the group eventually moved on – with us following – to the next venue: Man O’War! This bar, which also gave its name to the scattering of houses around it, was evidently established in 1595 and became a toll point on the turnpike section of the main Dublin to Belfast road in the 1700s. The road has long since been superseded and is now a quiet lane. The pub, however, has grown in size and reputation and, on Stephen’s Day was packed: a large number of musicians was seated around an enormous table, and post-Christmas festivities were in full swing, with an air of expectancy leading up to the arrival of the Mummers. 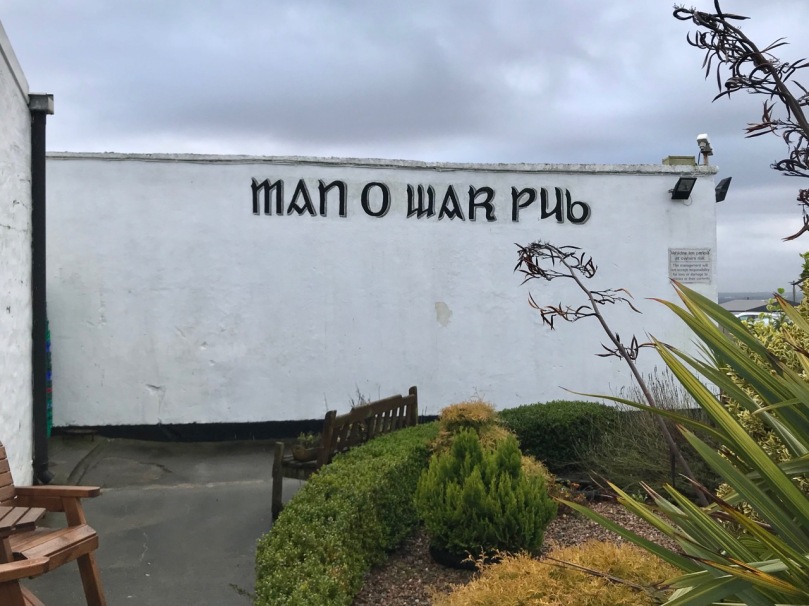 It was at Man O’War that we saw the Fingal play performed. There are around a dozen characters, which include St Patrick, Prince George, The Doctor, The Butcher, Jenny Wren and Beelzebub. The main protagonists, Patrick and George, fight with swords until the former kills the latter (obviously!). A quack doctor is brought in and raises George to fight another day. There is considerable humour, innuendo and – always – music and dance. A most important aspect, however, is the appearance towards the end of the play of a character – Slick-Slack – who carries a large family on his back (usually dolls and teddy bears). 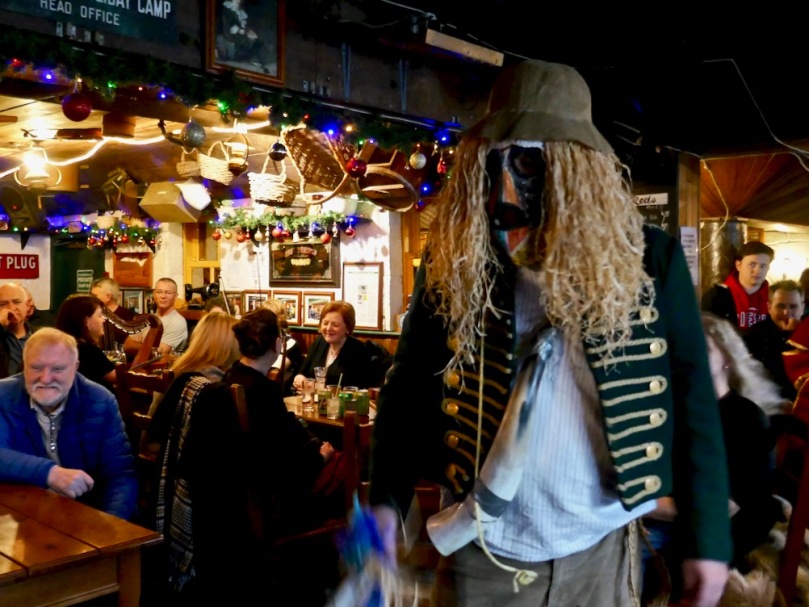 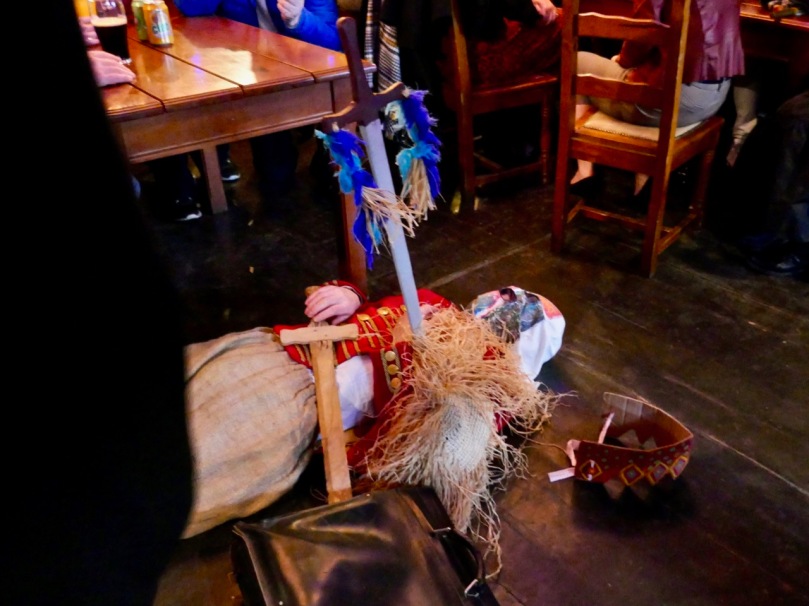 For me, it was just slipping back to old times: from when I could barely walk we attended the Mummers play at Crookham Village in Hampshire, England, every Boxing Day, and I absorbed the tradition into the rhythm of 1950s life. Here are the Crookham Village Mummers around that time: 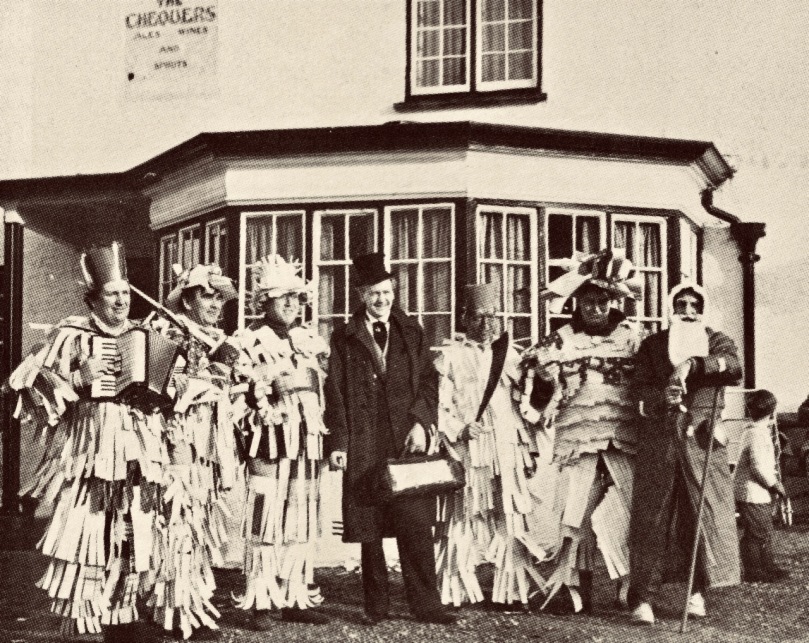 A mid 20th century photograph of the Crookham Mummers, Hampshire: could the little boy on the right be me? The characters in this play, left to right – Roomer, Slasher, Trim Tram, Doctor, Turkish Knight, King George, Old Father Christmas

Into adulthood I never questioned the existence of the Mummers: they were just an essential part of Christmas – like carols, bells and reindeer. As soon as I was able, I joined the Mummers myself and now, after decades of performing it, carry the complete play in my head (the Hampshire version of it, anyway). It was only when my interest in folklore became academic that I asked myself: what is all this about? And then I became aware of the significance of mummery in the traditional cultures of northern Europe, Scandinavia – and beyond – and saw its place and relevance to the season when the sun gets to its lowest point and then has to be encouraged back again: cold and darkness have to be replaced in the natural cycle with light, warmth and regeneration. The old spirit of winter has to be supplanted by the young fertility character who carries his wife and (large) family on his back. In Fingal that is Slick-Slack; in Hampshire it is Trim-Tram who rounds off the performance:

In comes I, Trim-Tram, left hand press gang: press all you bold fellows to sea to fight the French and Spanish. Although my name be Jolly Jack, wife and family on my back – although my family be but small, I thinks myself best man of all . . .

Trim-Tram fights with Old Father Christmas and kills him, causing some consternation to younger members of the audience. Trim-Tram concludes:

Ladies and gentlemen, see what I have done: killed my poor old Father Christmas, just like the setting sun. So, while I sits and takes my ease, good people – give us what you please . . .

At which point the hat is passed around, giving the watching crowd a chance to partake of the ‘luck’ which the Mummers bring to the communities they visit. 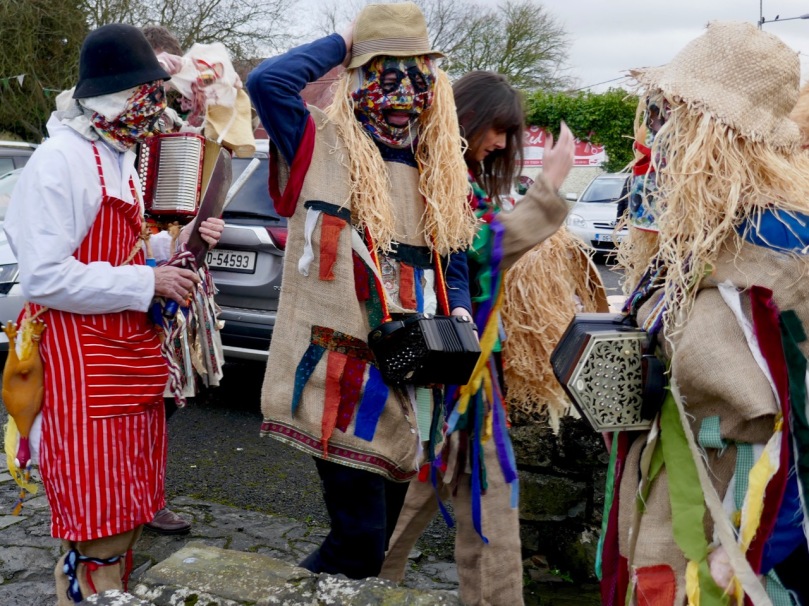 The Butcher is on the left – replete with carving knife and turkey!

Masks and straw headpieces are common in the Irish Stephen’s Day traditions. Remember the workshop we had in Ballydehob a few weeks ago? That was in preparation for a Wranning there this Christmas just gone. Unfortunately, we couldn’t magic ourselves to be in two places at once on the day, so we will have to wait for next year’s event. Meanwhile we were very happy to have the Fingal experience. Long may that county continue to hold on to the luck, and perpetuate its fecundity!