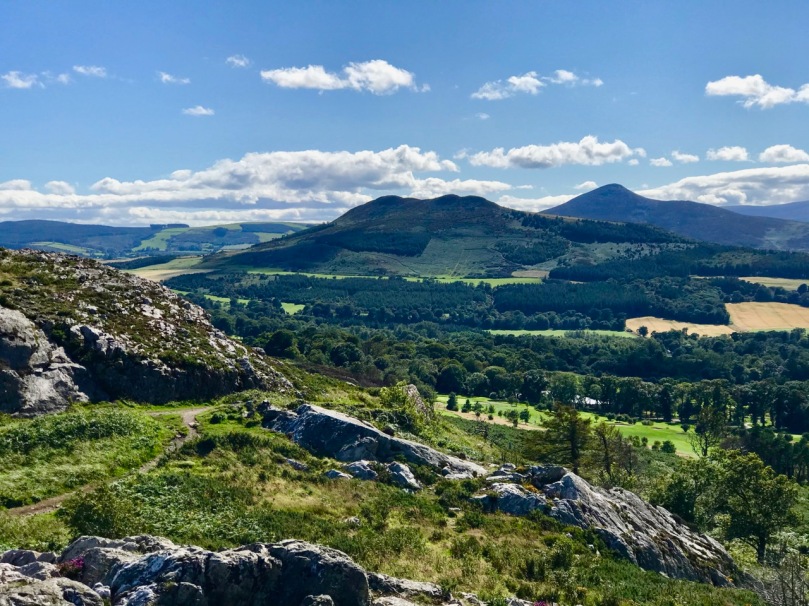 There seems to be a thread going through our recent posts: my Mizen Mountains and Signal Tower projects take us to high places, and today Finola reports on her exploration of hilltop crosses dating from the 1950 Holy Year. Our travels have brought us to many peaks and pinnacles in and beyond West Cork. I must say there’s nowhere I would rather be than far away from the crowds up on an Irish eminence which – without fail – provides us with the most spectacular views across the topography of this greenest of all lands. 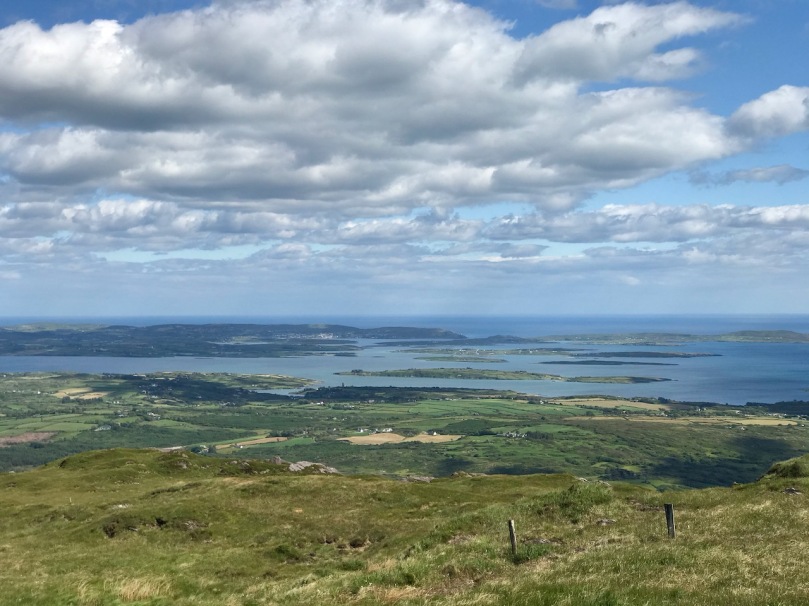 After lockdown restrictions were eased, we made a little trip up to County Wicklow to see family and friends, and took full advantage of the many trails that cross the granite outcrops between Bray and Greystones. The header picture looks south-west from Bray Head towards the Great Sugar Loaf, part of the Wicklow mountain range which, at 501 metres, is significantly higher than our own Mount Gabriel in West Cork at 404m, but which nevertheless provides this view (above) towards the coast of Roaringwater Bay, and looks out over Carbery’s 100 Isles. 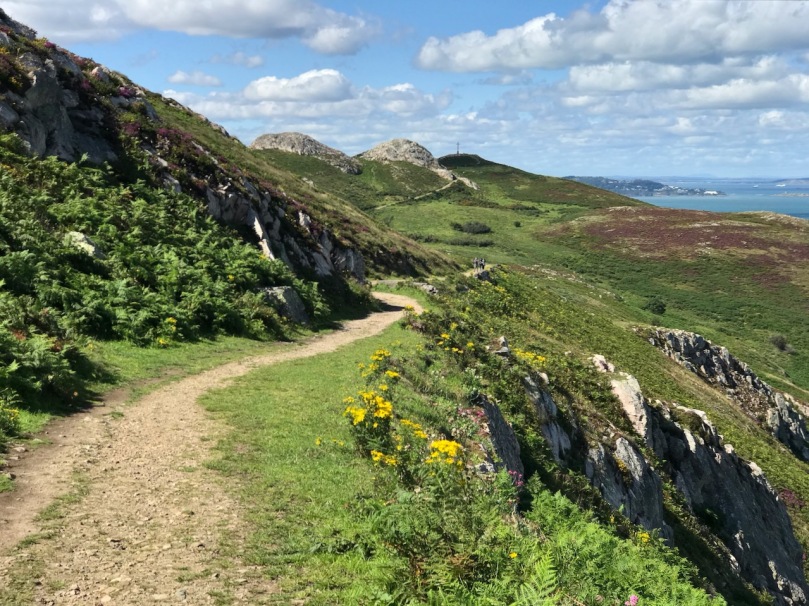 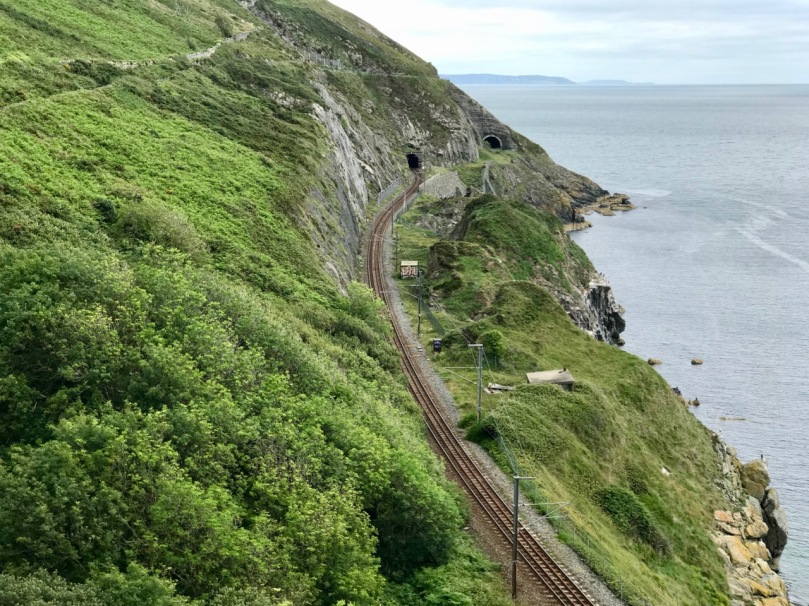 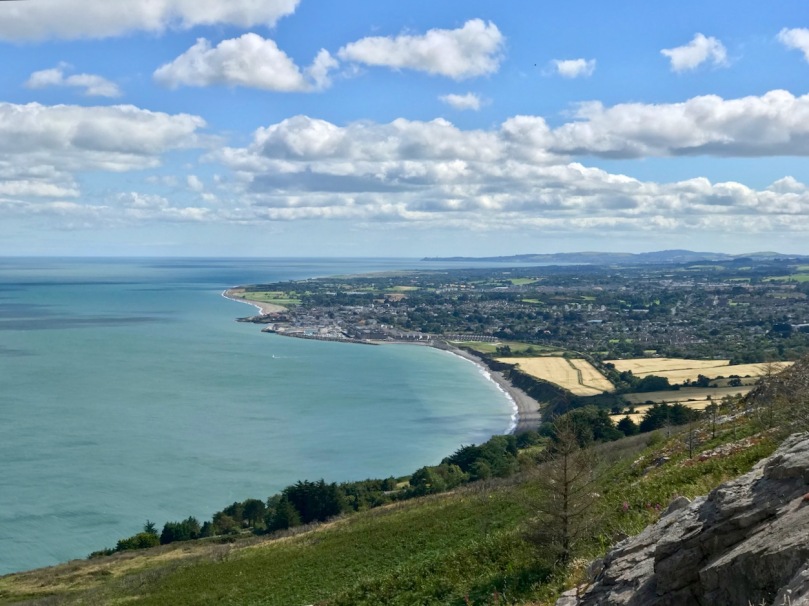 Travellers through Wicklow have, since ancient times, oriented themselves using the high peaks. Pilgrims going to the holy city of Glendalough and keeping to the coastline south out of Dublin might have followed the routes which, today, pass over Bray Head. A modern way of doing it, at least in part, is on the railway line that hugs the cliffs between Greystones and Bray – a feat of engineering laid out by Isambard Kingdom Brunel in the 1850s and surviving to this day, although it has had to be realigned six times because of erosion and rockfalls. It has even been described as one of the world’s most picturesque train journeys – something of an exaggeration, perhaps, but it’s well worth taking the trip if you are in the area. The photos above show (from upper) the public trail leading from Windgate up to the Bray Head Cross; the railway line seen from the cliff path that runs close to the route – note the abandoned tunnel on the far right; the view from Bray Head looking south to Greystones with Dunbur Head, south of Wicklow town, far beyond. 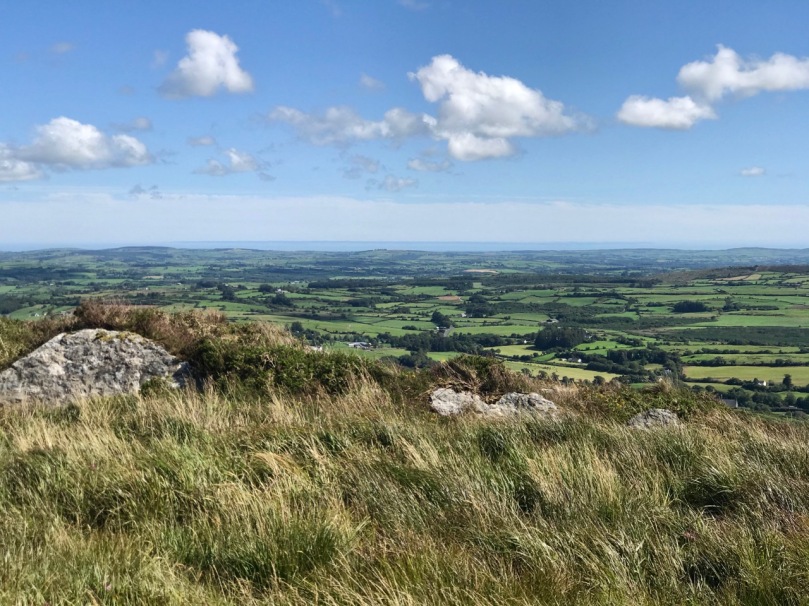 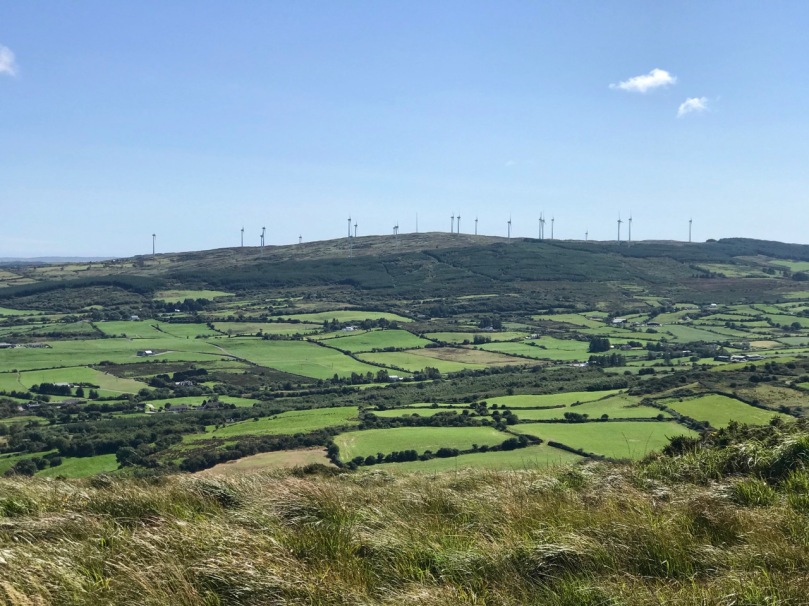 Back in West Cork we have no end of high places to choose from. Our latest escapade was a climb to the 1950 cross at Dromore, between Bantry and Drimoleague, which provides the two views above and this one, below, from which you can see the high peak of Gabriel in the distant west. 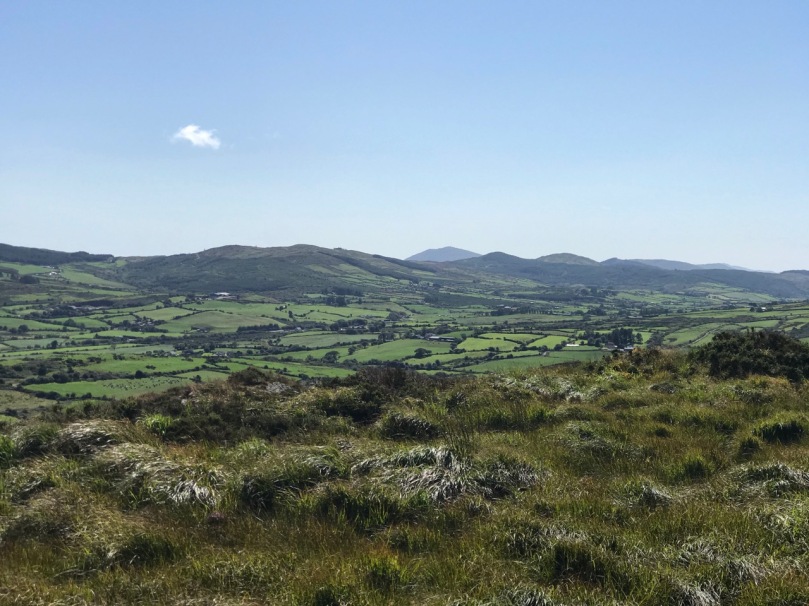 We have shared with you some of our favourite high journeys in our own part of the country, including the remarkable Borlin Valley road, which crosses the County border between Cork and Kerry: 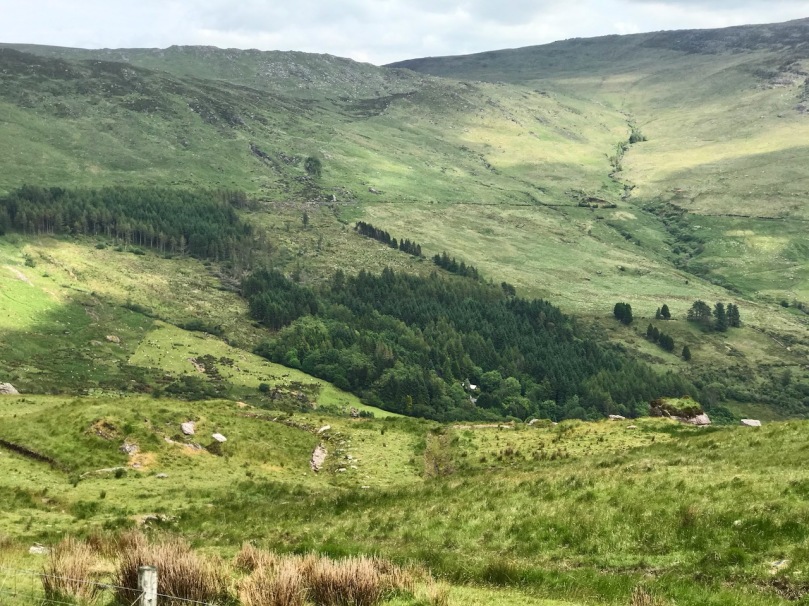 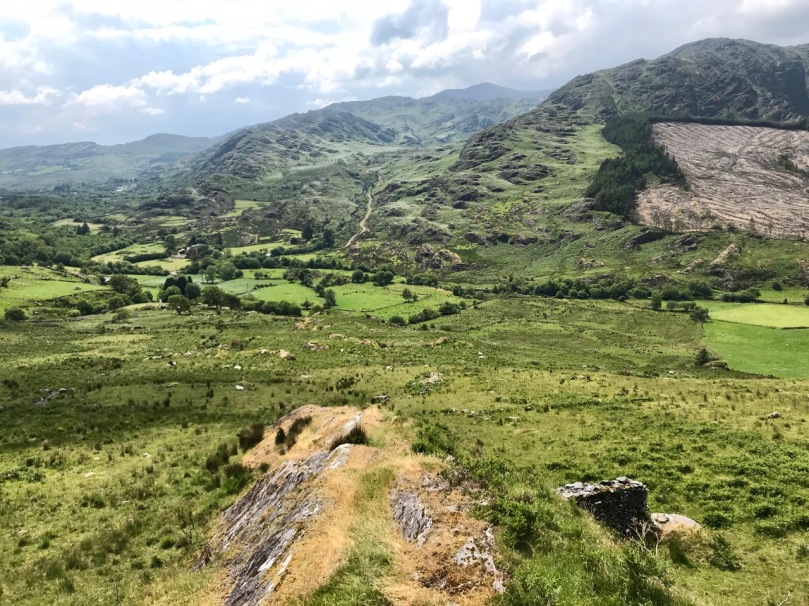 Climbing to the summit of Knockaphuca gave us this striking view over the Mizen village of Goleen and out to the ‘Wild’ Atlantic beyond it: 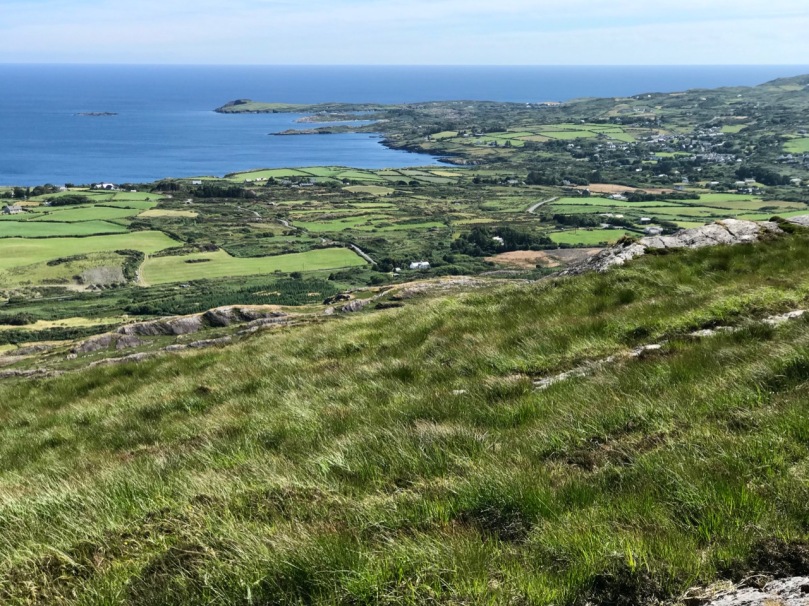 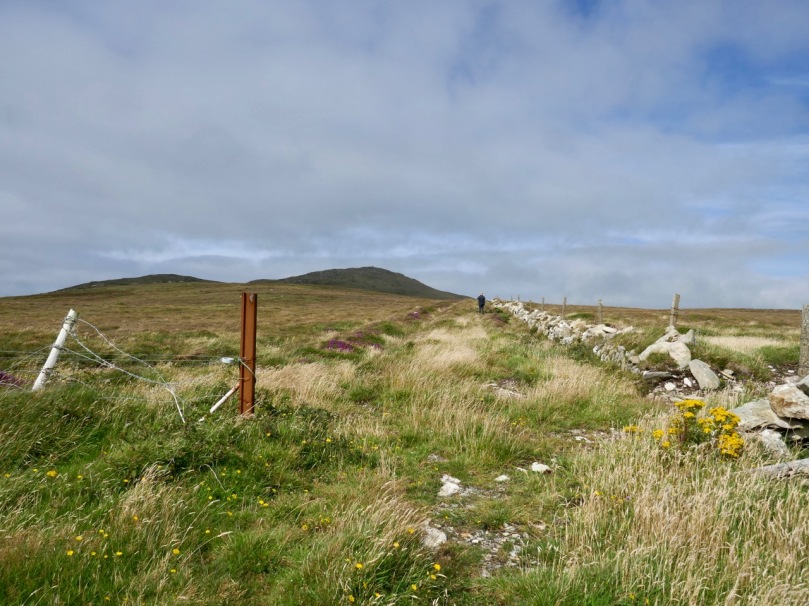 Heights still to be scaled: in the picture above I’m walking on a very old roadway which leads out to a ruined Napoleonic signal station perched right above Mizen Head. To my left is the distinctive Mizen Peak. Both sites will feature in future posts, and both reveal dramatic views over this western edge of the land. 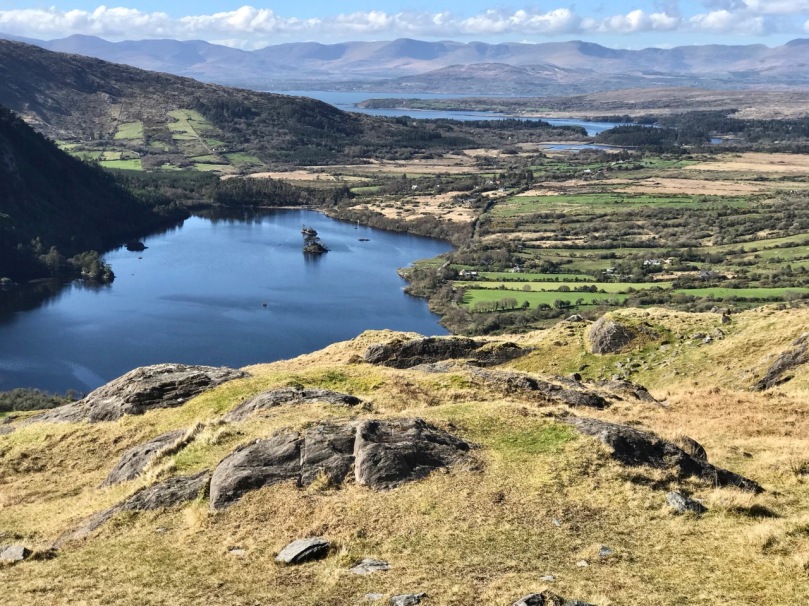 We couldn’t complete any account of high places in the west of Ireland without mention of one of our favourite destinations: the Beara Peninsula. Above is the view north from the top of the Healey Pass, looking into Kerry. Below is a dizzying view into the heart of the Beara: look at the farmsteads and cottages below the ancient field system, dwarfed by the power of the mountains. 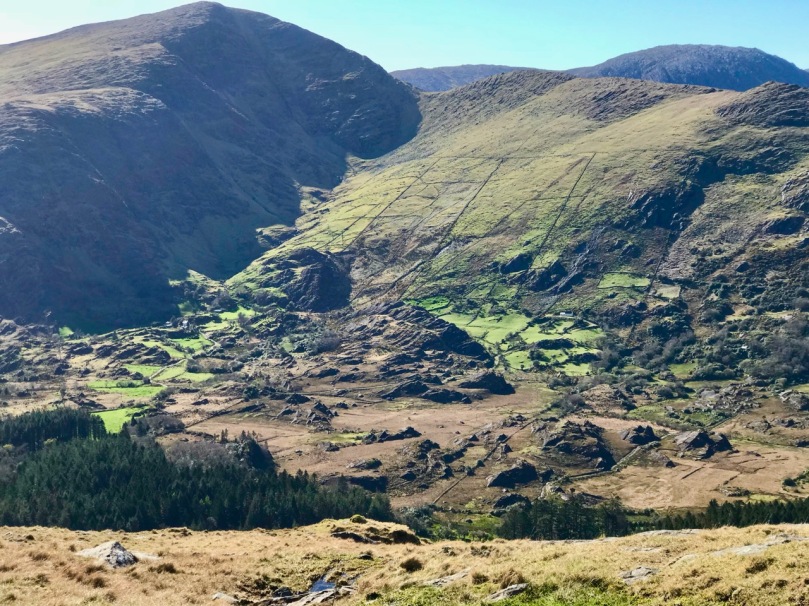 We will continue to share with you our experiencing of the landscapes here, and not just the high places, of course. We have many years of exploring Ireland under our belts, and look forward to lots still to come. 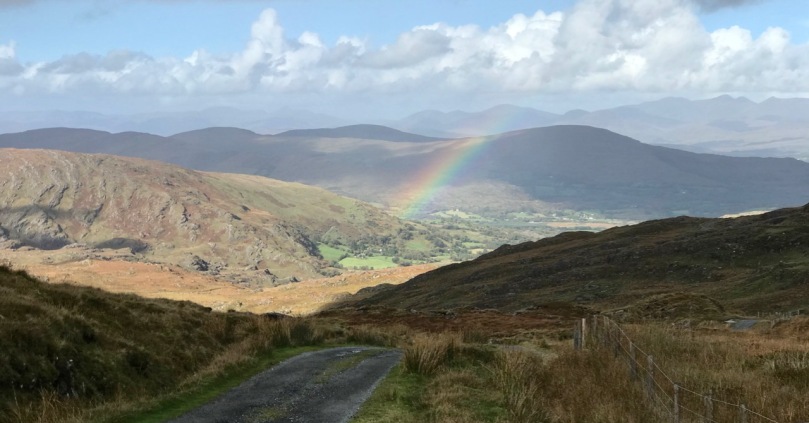