Nead an Iolair – that is the house we live in, here in the townland of Cappaghglass, West Cork. That’s it, in the picture above, with a pair of eagles flying overhead… We don’t see them very often. Well, in truth, we haven’t seen them at all – this is a bit of photographic magic – and wishful thinking. Nead an Iolair – our Irish readers will know that this means Nest of the Eagles – is a perfect name for the site, suspended way up above Rossbrin Cove – a good lookout with higher ground behind: exactly the right environment for the big birds. There were undoubtedly eagles here once – and in various other parts of Ireland – but when and how many? As with most things nowadays, someone has carried out the research and there’s a study available online. It’s worth a read, but I can summarise the main points: analysis of place-names and documentary evidence from the last 1500 years enabled the following diagrams to be drawn up:

Data from The history of eagles in Britain and Ireland: an ecological review of placename and documentary evidence from the last 1500 years – Evans, O’Toole and Whitfield, RSPB Scotland 2012. Diagram (a) is 500AD and diagram (b) is 1800AD. The dots show Golden Eagle locations in dark grey, White-tailed Eagle locations in light grey and overlapping of both species in black

The diagram shows that White-tailed Eagles have lived here on the Mizen Peninsula 1500 years ago, and both species have been located a little further up the west coast as recently as 200 years ago. In 2001 fifty young golden eagles were released in Glenveagh National Park, Donegal, in an attempt to reintroduce the bird to Ireland. In a similar project to reintroduce white-tailed eagles,  one hundred of the birds were brought from Norway to the Killarney National Park between 2007 and 2011, and up to September 2016 thirteen chicks have survived. The aim is to get at least ten chicks flying from their nests each year. Six white-tailed eagle chicks have flown from their nests in Ireland in 2016, making it the most successful year yet; one of these chicks was born near Glengariff, which is only just over the hill from us in terms of an eagle’s range. So we remain ever hopeful that the white-tailed eagles (sometimes known as white-tailed sea eagles) will soon make their way down here to Nead an Iolair – attracted, perhaps, by the name. We’d be very pleased to see them circling overhead – they are the largest birds on Ireland’s shores. Already our bird feeders attract avians of all shapes and sizes, and they generally get along fine with each other, although the smaller birds do make themselves scarce when Spioróg turns up!

A superb photograph of Haliaeetus albicilla – the white-tailed eagle or white-tailed sea-eagle, by Yathin S Krishnappa (via Wikipedia Commons). This was taken in Svolvaer, Norway – geographical source of the birds that were reintroduced into Killarney National Park within the last decade

Whenever we are on our travels we look out for the word Iolair (eagle) in place-names. We found one in Duhallow, a Barony in Cork County, just north of the wonderfully named Boggeragh Mountains. In fact we were alerted by signposts directing us to Nad or Nadd (nest) and found ourselves in a tiny settlement which was determined to point out its links with the eagles.

The village of Nead an Iolair in Duhallow, North Cork makes its associations with eagles very clear. The pub is named The Eagle’s Nest, and there is a fine sculpture of the bird sitting Nelson-like on a column beside it

Besides these features the village has a poignant memorial dating from the struggle for independence: a reminder of harsh realities still within living memory. The words that stand out are May God Free Ireland. 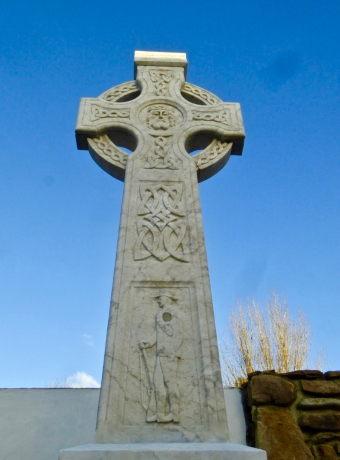 Back to the eagles and – in an interesting diversion into semantics – we noticed that the name over the door of the pub is in old Irish script and has introduced an additional character to the word Iolair – it looks like an ‘f’. Finola tells me that the use of the accent over that ‘f’ – which is known as a búilte – serves to silence the letter. In modern script it would be converted to ‘fh’: so fhiolair would still be pronounced ‘uller’. But we can’t find any precedent for using the word in this form. Perhaps an expert in Irish language can help us here…?

Regular readers will be aware that I am always on the lookout for links between Cornwall and the West of Ireland (and there are many). Interestingly, Nead an Iolair is one of them. Just outside St Ives, on the north coast of Cornwall, is a superb house, also called Eagle’s Nest. It was the family home of Patrick Heron, one of the influential St Ives School artists. When I lived in Cornwall I frequently passed by the house and was always impressed with its location – like us now, it is high up above the coast with a commanding view over the myriad small fields and out to the ocean. I always thought I would like to live there, because of that view… Now I have my own Eagle’s Nest – and I couldn’t be more content. 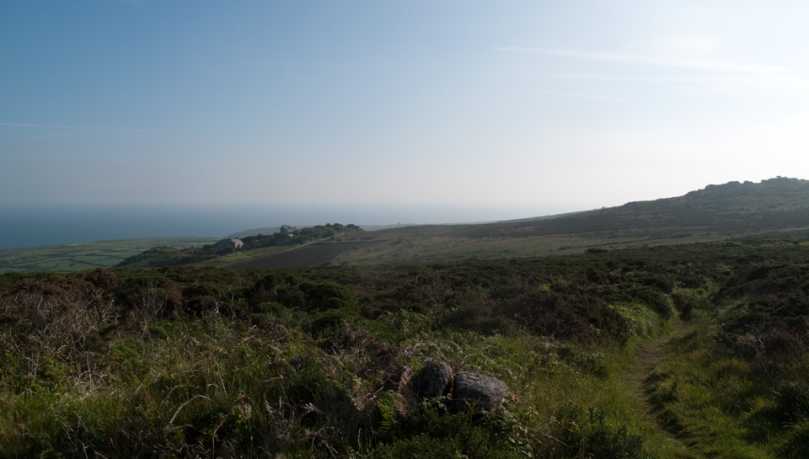 Looking across the Cornish moorlands near Zennor, towards Eagle’s Nest – photographed by the artist Patrick Heron, whose home this was

Amanda started her blog, Holy Wells of Cork, in February and oh my goodness she already has over 100 wells documented. Not just documented – recorded, photographed, mapped, described, researched and written up in a charming cheerful style that’s a hoot and a pleasure to read.

Standard Amanda shot as she checks out St Laitiaran’s Well

Robert and I go along on her well-finding trips every now and then. Between accompanying Amanda, and wells we’ve gone to ourselves, we’ve visited about half the wells in her gazetteer. The sheer variety is astonishing, as also is the varying state of preservation. From muddy holes in the ground to gleaming and designed surrounds – holy wells come in all shapes, all sizes, and all conditions.

Duhallow – isn’t that a lovely word? It’s a lovely place too – a barony (part of Ireland’s old land division system) that occupies the northwest corner of the county of Cork. It’s mostly rolling hills and farmland, drained by the headwaters of the Blackwater River, with the Derrynasaggart and Boggeragh mountains to the south and the rich agricultural lands of Limerick to the north, while the Kingdom of Kerry lies just over the county border to the west.

Duhallow has its act together when it comes to holy wells – the local development committee has developed a Holy Well Trail. A brochure leads you around the trail and at each well is a detailed history of the well, the saints associated with it, the cures attributed to it, and the rounds and prayers to be undertaken.

Tubrid Well, Millstreet. Robert adds his mark to the cross inscribed by hundreds of pilgrims

At  many of these sites mass is still said once a year and cups and bottles are provided so that you can drink, or take away, some of the water. The Tubrid Well outside Millstreeet is the largest and most active. While we were there people came and went and fresh flowers and candles were in evidence. This is a well that even has its own Facebook page!

The well devoted to Inghne Bhuidhe (Inyeh Bwee, daughter of Buidhe, the Yellow-Haired) provided a complete contrast – out in the middle of corn fields, surrounded by a low wall and with a rag-festooned thorn tree looming over it. This one had a remote and tranquil vibe, suitable for contemplation.

My  personal favourite was the Trinity Well near Newmarket, mainly because it was built inside a fulacht fiadh (pronounced full okt feeah) – that’s an ancient (possibly as far back as the Late Bronze Age) cooking place where stones were heated and then rolled into a trough of water. Over time, the used stones built up into a horseshoe-shaped mound that surround the trough – now re-purposed as a holy well. It was a marvellous testament to the timeless character of special places in the deep countryside. 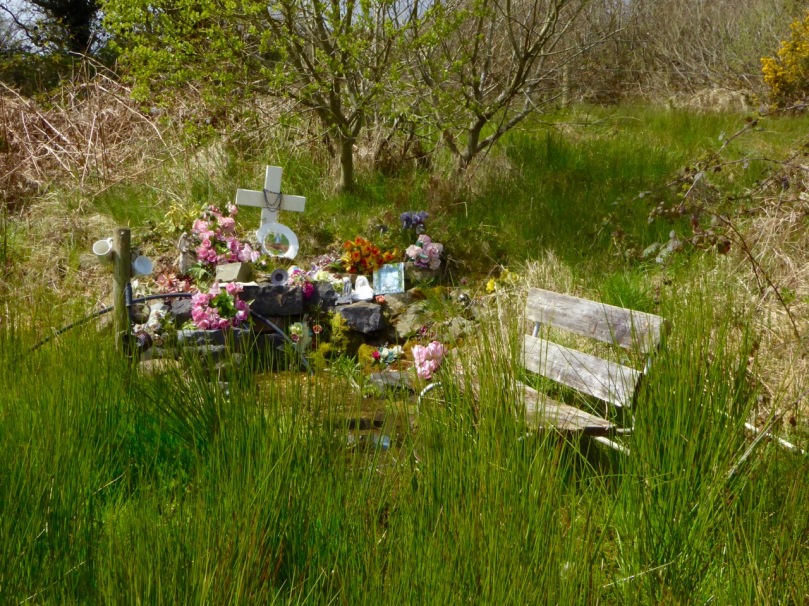 One of Duhallow’s wells is high in the Mushera Hills and dedicated to St John. The first photo in this post shows the location and extent of it. Back when the veneration of holy wells was at its peak, this one was the site of an enormous pilgrimage on St John’s Eve, June 23rd, every year. As with many such events the prayers and devotions of the daytime gave way to the partying of the night time and eventually the church acted to curb what they saw as the excessive debauchery of the occasion. Read Amanda’s account of the goings-on at Gougane Barra for an insight into the aprés-penance hooleys.

Tullylease had three wells, one devoted to Mary and another to St Beirechert (a saint whose name is spelled in a bewildering number of ways). The third well turned out to be something different – see below. The Marian well is thoughtfully stocked with holy water. Some of it is now in our bathroom to see if a few drops added to the bathwater will fend off the rheumatiz. So far, so good. 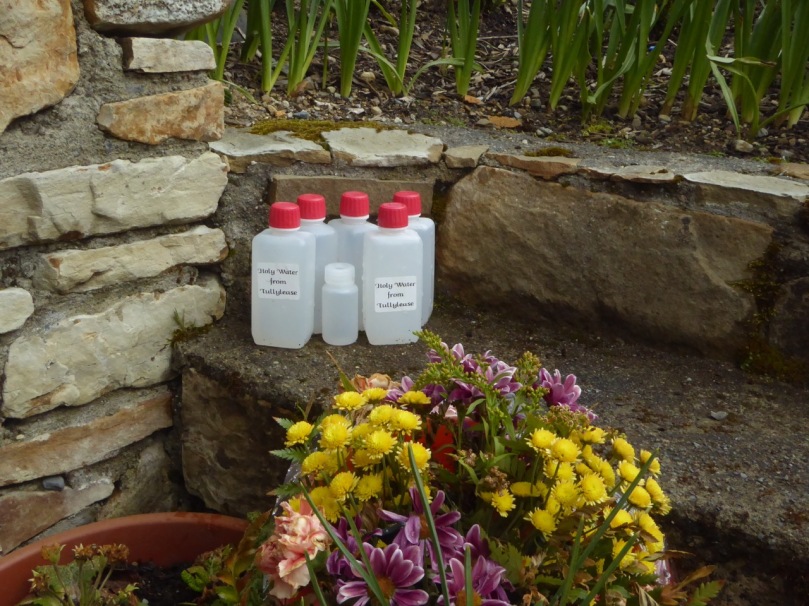 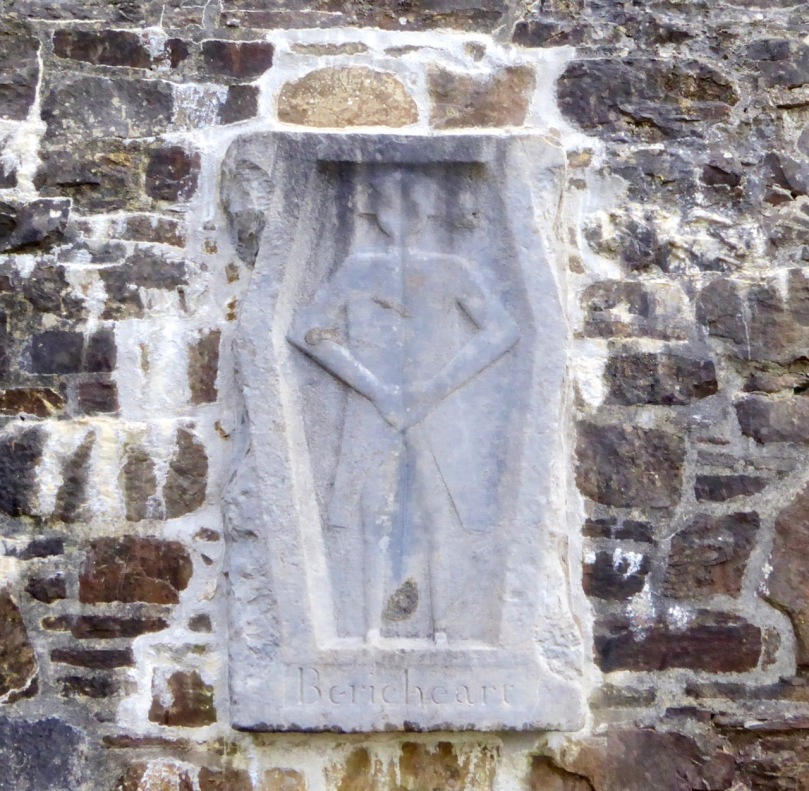 We  were intrigued to learn recently that this very cross was used as a model for the design of leather and fabric pieces for UCC’s Honan Chapel, an Arts and Crafts masterpiece, when it was being built a hundred years ago. I can’t show you a picture of that, as it’s undergoing painstaking conservation, but click here to see a modern use of the design!

The final well we saw at Tullylease  wasn’t really a well at all but a bullaun stone – a big one. It’s supposed to cure headaches if you rub your forehead all around the rim, so here is Amanda, about to give it a try. 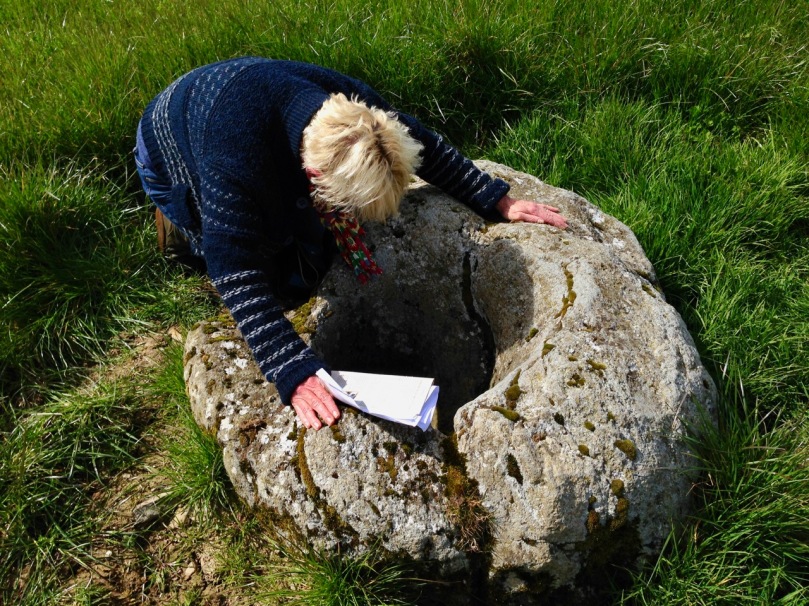 Our last stop was at a well for St Brigid. This one had a kind of cupboard containing a book in which visitors can write their prayers and ‘intentions’. It was fairly up to date, indicating recent visits.

In  this post I have concentrated on the Duhallow wells, as examples of how one community has embraced this aspect of its heritage and created a wonderful experience for its residence and for visitors. For a detailed description of each of the ones I’ve mentioned here, browse through the North Cork section of Amanda’s Gazetteer.

But following a brochure and a map to wells that are tidy and well signed is not a fair representation of how you find holy wells in the field! In my next Good Well Hunting post I will invite you to come with us as we fight brambles, mud and neglect, as well as discover little gems still intact and visited in the deep countryside.