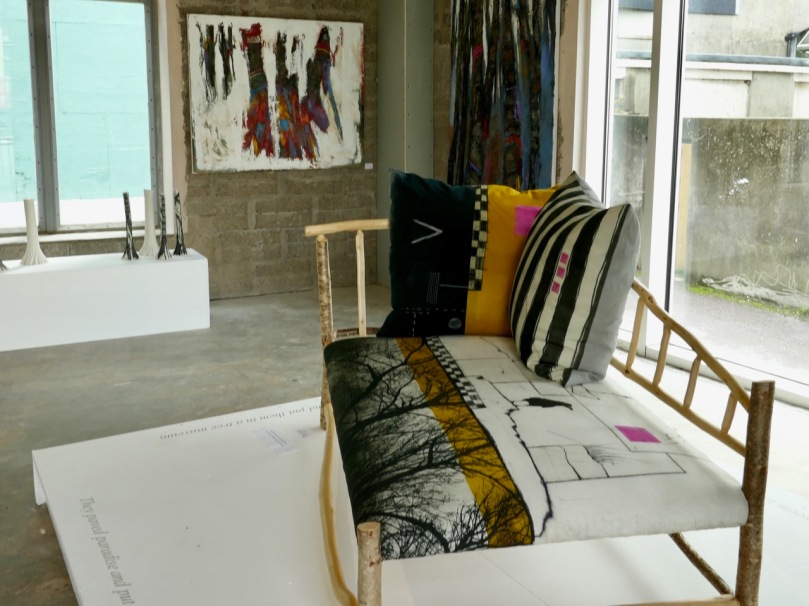 We’ve been enjoying a week of laid back excursions, In Ballydehob and Skibbereen, as we take time this week to enjoy what’s around us in West Cork at this time of year.

There are always excellent art exhibitions in the summer – we have written this summer already  about the always interesting Blue House Gallery and Judi Whitton’s watercolours, the marvellous art trail in the Skibbereen Arts Festival and of course the Ballydehob Arts Museum’s current exhibition, Ballydehob on Bahnhofstrasse. 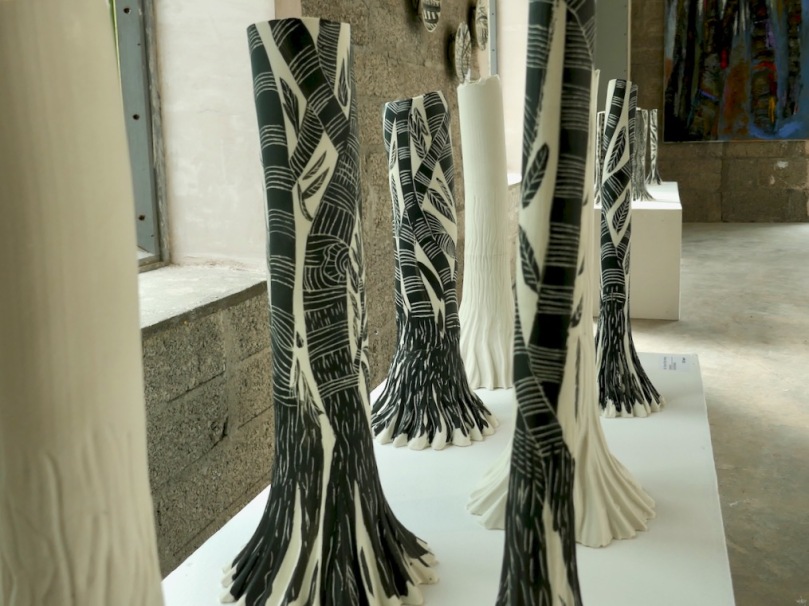 This week saw the opening of what’s always eagerly anticipated – the annual West Cork Creates exhibition on Skibbereen. Curated by Alison Ospina of Greenwood Chairs, this show brings together the best of West Cork arts and crafts in an exciting mix of styles and materials.

Next to it is Geoff Greenham and Melanie Black’s Creative Spaces, a photographic journey through the studios of artists currently practising in West Cork. It’s a great idea and feels like a real privilege to catch a glimpse inside these spaces. 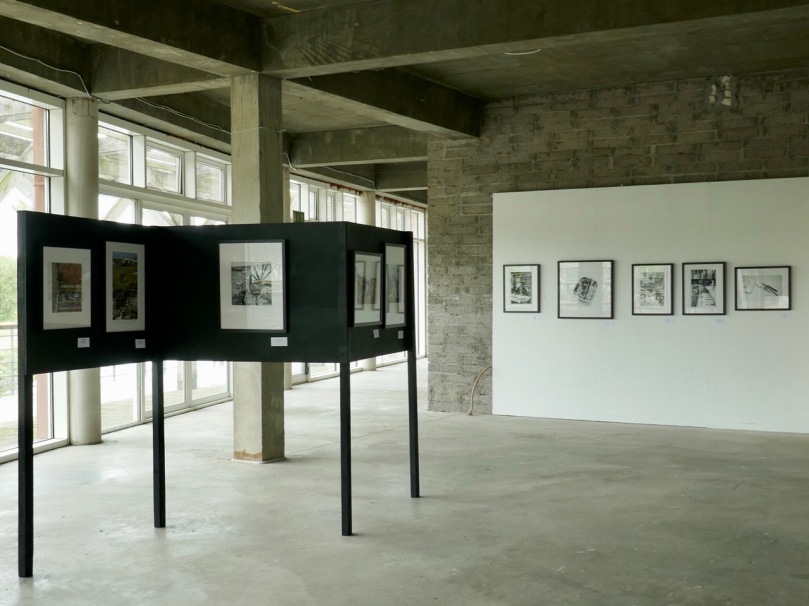 The two images above are borrowed, with thanks, from the Blue House Gallery, where an earlier exhibition matched the studio images with pieces of art from each artist. The first shows Brian Lalor’s studio and the second is that of John Doherty.

And yes, I thought, somehow those spaces do reflect the art that comes out of them. I’ve tried to photograph artists’ studios myself in the last couple of years, so I know how difficult it is to capture the essence. 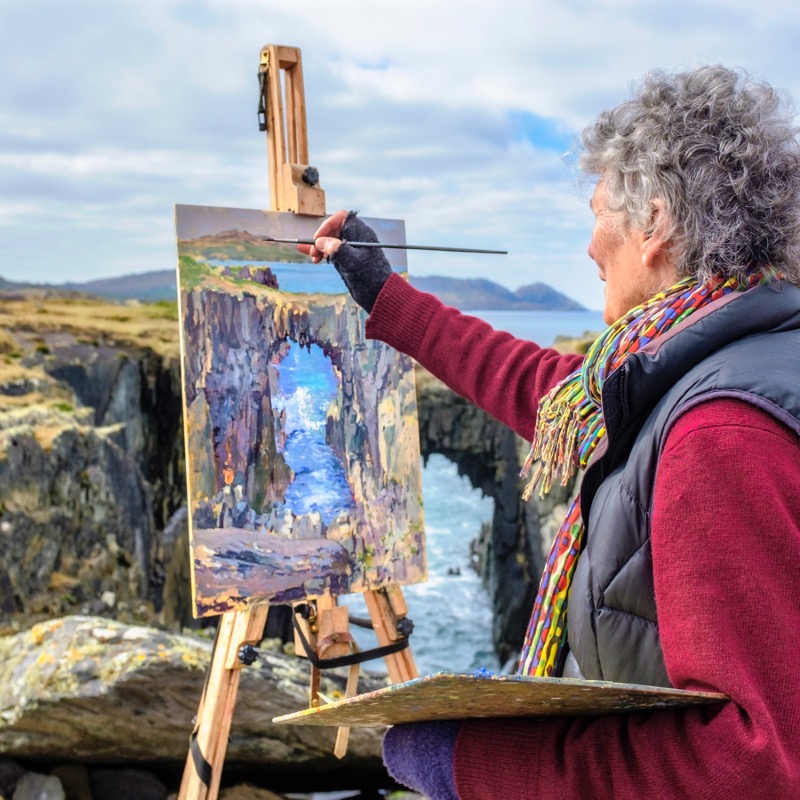 No studio needed when you paint en plein air. This is Damaris Lysaght at work at a site we wrote about in our post Mizen Magic 13: Dunmanus Promontory

Do catch these two exhibitions if you can. Then make your way to Ballydehob and take in the new space that is the Working Artist Studios, right on the Main Street. We’ve all been looking forward to the opening of this venture, previously situated in Skibbereen but now adding to the thriving streetscape of Ballydehob.

The grand opening was well attended! (The railings are not for the WAS but for the Turnip Races, see below)

Working Artist Studio is an innovative idea that melds gallery and performance space with studios for artists at reasonable rates. Pól and Marie are bursting with ideas and plans and it’s wonderful to see this shop and house, surprisingly roomy inside, so nicely re-purposed.

The opening exhibition was by Caoimhe Pendred (above), titled Hy Brasil – her ethereal take on the notion of the mystical Isle to the West. It was opened by none other than Tim Pat Coogan (below), the Irish historian, and Caoimhe’s grandfather.

But woman cannot live on art alone, and we were delighted to welcome back Bia Rebel Ramen to our village this summer after a stint at the Taste of West Cork here a couple of years ago. Brian and Jenny have made a name for themselves with top restaurant critics as the best place in Ireland for ramen. 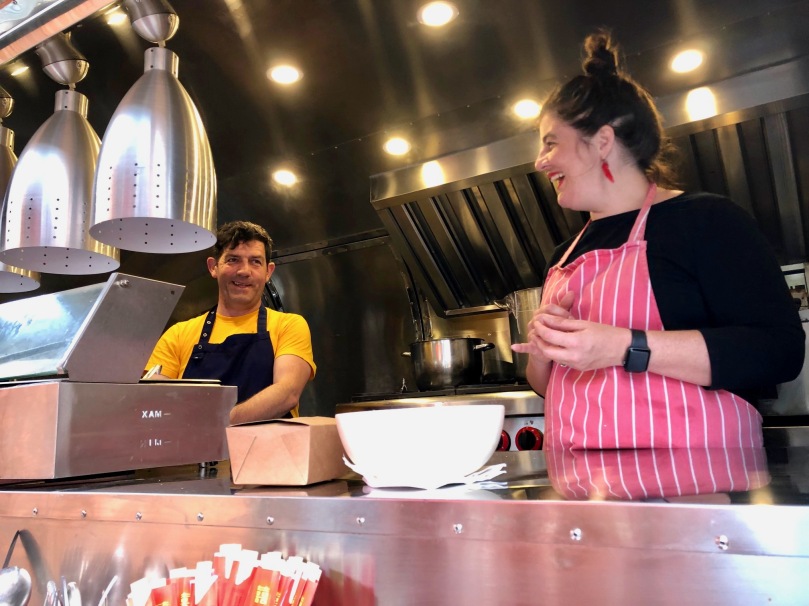 The truck is set up to serve the food at Levis’s Corner house. They are only here for a few more days

They normally operate out of their food truck in Belfast,  but are on ‘holidays’ in West Cork. Some holiday – they are so busy that they run out of food on a couple of hours. What can we do to entice them to stay here permanently? This is the best ramen I have ever eaten, and having lived in Vancouver (Canadian home of Japanese food) that is saying something!

Did you know that Ballydehob hosts the World Championship Turnip Races? This Irish Times article in 2006 described it, and 13 years later it’s still going strong and still great fun, with Barry O’Brien (below in the pink shirt) doing the marshalling.

And to round out my week, a major thrill. I hitched a ride on my friend Jack O’Keefe’s Drascombe Lugger as he participated in the Ballydehob Crinniú na mBád. I wrote about this wonderful event a couple of years ago, but it was a whole other experience to be out on the water with the boats as they gathered at the mouth of Ballydehob Bay and then sailed up the estuary. See Robert’s post today, Ballydehob and Boats, for some more of my photographs of this event.

All around us summer is in full swing – we have just mentioned a tiny fraction of what’s going on. Why don’t you join us next year? We can’t guarantee good weather, but you won’t be bored!

Lilian Roberts Finlay, the novelist and short-story writer, was brilliant, complicated, fascinating, infuriating, mendacious and beautiful. She was also my mother. She wrote all her life although she didn’t start to publish until her 70s. I recommend her book of short stories, The Bona Fide Husband, and her first novel, Always in My Mind (after that, things went downhill). Old copies are still available through Amazon. 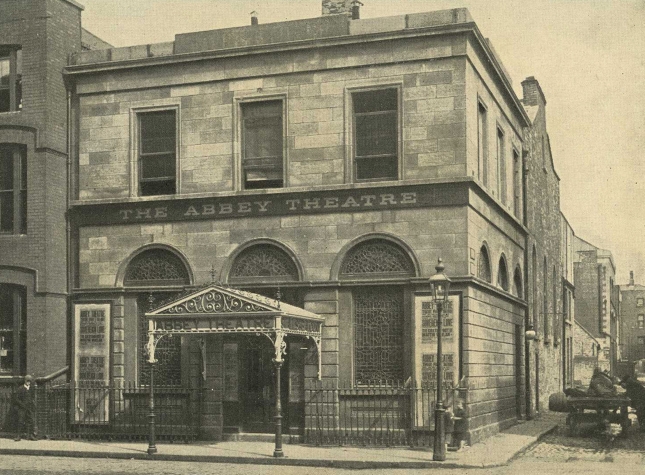 The original Abbey Theatre , which was destroyed by fire in in 1951. The Abbey School of Acting was housed in the Peacock Theatre, an annex to the main theatre

Lilian died, aged 96, in 2011. Because her books have been out of print for a long time I was surprised when a Google search turned up a very recent reference to Always in My Mind. Intrigued, I logged on to a blog called Chasing Aideen, written by Ciara O’Dowd Conway. Ciara researches and writes (beautifully) about women in the early days of the Abbey Theatre, Ireland’s famous national theatre. She had been delighted to discover passages in the novel that described the narrator’s experiences as a student in the Abbey School of Acting, since the women she researches had been associated with that period (the 1930s) of the Abbey Theatre and the Abbey School as influential and pioneering actors, teachers and directors.

Shelagh Richards, Sarah Allgood and Ria Mooney in a 1937 film of Riders To The Sea by J M Synge

As part of the 1916 centenary celebrations the Abbey Theatre, last year, announced its 2016 year long programme. When the programme revealed how scandalously underrepresented women were as writers and directors, it created a furore. Almost overnight the WTF/Waking the Feminists movement came together to work for gender equality in Irish theatre. An exhilarating meeting in November galvanised a powerful new direction for Irish theatre women and they haven’t looked back since.

This 1937 cover of Dublin Opinion, a satirical magazine, shows the ancient and powerful women of Ireland haunting De Valera’s dreams. While women had fought for Irish freedom and while the 1916 Declaration of Independence promised equality for all citizens, the Constitution assigned women to a ‘special role in the home’

For Ciara it was all too reminiscent of the challenges that had faced her ‘girls’ in the 30s and 40s. Was it really still going on, 80 years later? She wrote a piece on the WTF website – sorry, this is no longer available, but it helped me to understand her reaction and her decision to use her website as her own personal contribution to Waking the Feminists. 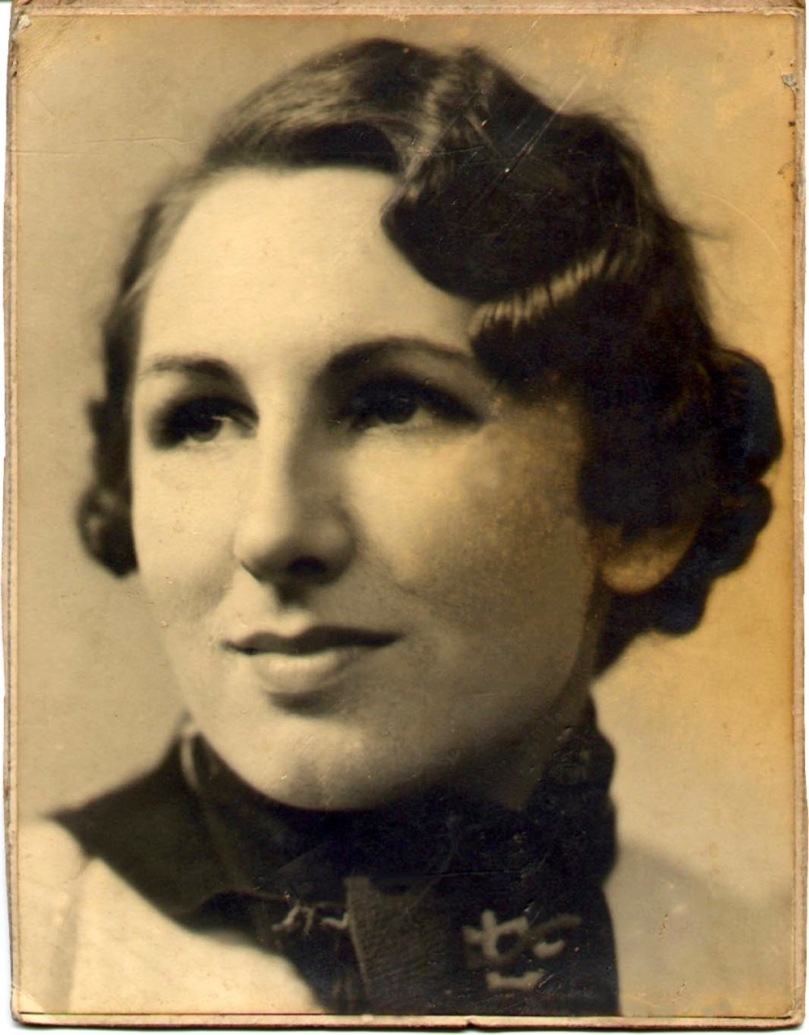 Lilian, about the time she studied at the Abbey School of Acting

Back to Lilian. When I read Ciara’s blog piece, I contacted her to say that we had some letters from my mother’s Abbey School of Acting days that might be of interest to her. Not only that, I was able to put her in touch with Ria Mooney’s niece, a friend of mine who lives in Vancouver. Ciara and Robert and I met over coffee  in Dalkey last week and yes, the letters in the old chocolate box turned out to be grist to the mill for Ciara. 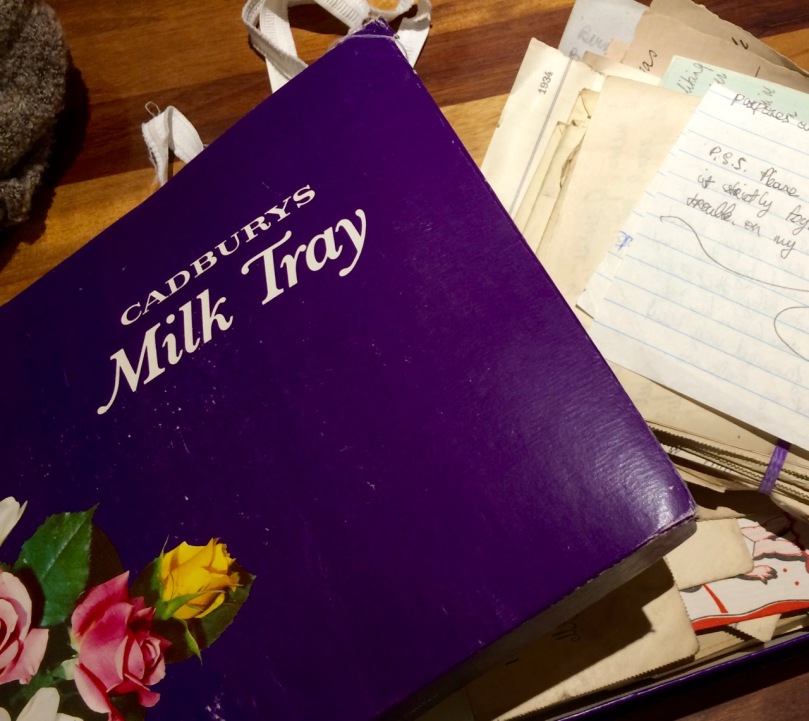 She has written a couple of posts already about them, and there are more in the works. She writes in an expressive and entertaining style, so why don’t we let her take up the tale from here? I’ve put a link so you can leave Roaringwater Journal at the end of this post and head on over to Chasing Aideen.

But come back when you’re finished and tell me what you thought of it all. If you want to know more about Lilian, you can read obituaries here, and here.  Just don’t believe everything you read – my mother specialised in fiction, after all.

The precious letters, written 80 years, now scanned and ready for study by Ciara

And next week, I’ll get back to writing about West Cork…