My strongest memory of our visit to Labacallee wedge tomb, Co Cork, earlier this summer was the rookery above it. Our presence seemed to make this multitude of large black birds restless: there was a constant movement over our heads – a mixing up of flapping feathers, wind in the still bare branches and screeching protests. These are the unpaid guardians of this monument, apparently the largest of its kind in Ireland, with a long documented history and a wealth of folklore.

Labacallee today: it must once have been an impressive and dominant feature on an open landscape. Now it has been closed in by fields, trees and a byroad running north out of Fermoy. In the foreground is a cairn, possibly made in relatively modern times from material excavated from the monument

Finola has written about wedge tombs. She calls them The Last of the Megaliths: court-tombs, portal-tombs and passage-tombs are slightly earlier constructions, built before c2000 BC, while wedge tombs date from some 500 years after this. According to the Archaeological Inventory of County Cork Volume 1 (Stationery Office Dublin 1992) …The more numerous and widespread wedge-tombs are relatively small and simple constructions, so called because of an increase in height and width from the chamber rear to the entrance front. They generally face in a south-westerly direction, an orientation they share with stone circles and stone rows…

The east facing – and narrower – end of the wedge tomb

Labacallee is enormous, especially if you are only familiar with examples such as Altar, west of Goleen (itself sizeable) or our own more domesticated version at Kilbronogue, a neighbouring townland:

A more ‘human scale’ wedge tomb at Kilbronogue, West Cork: many thanks to Stephen Lynch, a near neighbour, for looking after this example and allowing us access

Labbacallee – the name seems to be from the Irish Leaba Caillighe – ‘the bed of the witch’ – measures some 14 metres by 8 metres overall. It has a series of upright stone ‘walls’ supporting three capstones. The largest of these measures 5 metres by 2.5 metres and is a metre in thickness: it must weigh at least 10 tons. These stones house three ‘chamber’ enclosures.

Plan of Labbacallee wedge tomb drawn following the excavation by H G Leask and Liam Price in 1934, from Proceedings of the Royal Irish Academy Volume 43

The tomb has been recognised as an important site in British and Irish archaeology over a long period. English antiquary John Aubrey, who lived from 1626 to 1697 (and who was incidentally described as “Shiftless, roving and magotie-headed…”) is recognised as one of the first serious recorders of historic sites. He was also a keen collector of folklore and, like me, felt that the stories that local people told about the monuments around them were valuable insights into perceived history. 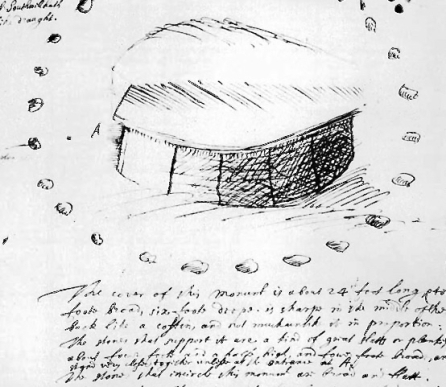 John Aubrey and a drawing of Labbacalle  he published in 1693. While you can see in the drawing the principle of a chamber constructed of upright stones and roofed with large slabs, there is very little resemblance in the drawing to the structure itself (which was anyway in a ruinous state in Aubrey’s lifetime). It has been suggested that Aubrey obtained the sketch – or a verbal description of the tomb – from a Mr Gethyng who lived close by it

A drawing from the1897 work The Dolmens of Ireland, their Distribution, Structural Characteristics, and Affinities in Other Countries; together with the folk-lore attaching to them and traditions of the Irish people by William Copeland Borlase 1848 -1899. This Cornish antiquary and politician spent part of his life in Ireland so it is likely that he did visit the tomb. Certainly the drawing is more true to life than Aubrey’s. After what has been described as ‘high living’ Borlase died in disgrace, having been involved in scandal and bankruptcy 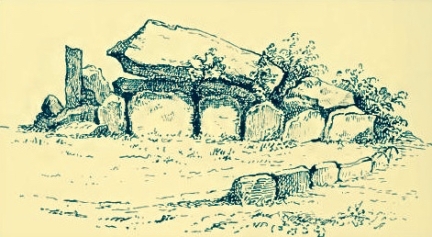 Artistic interpretations of a subject: views of Labbacallee dating from 1827 (top), 1844 (below left) and 1845 (below right by George Wilkinson)

The first full scientific examination and excavation of the tomb was carried out in 1934 under the supervision of H G Leask, using workers paid one guinea per week as part of a government unemployment relief plan. According to the excavation report, at this time the smallest chamber was filled to the top with rubble, including earth, stones, ash and the bones of animals and humans. When these were cleared a skeleton of a woman was exposed, together with a bone pin which might have fastened a garment or shroud. The woman’s skull was missing but later found upright (as though on display?) in the large main chamber. One of the leg bones of the skeleton was deformed: this led to the speculation that her handicap may have set her apart in life, giving her a status that was either feared or revered: she might have been ‘marked out as a witch’. 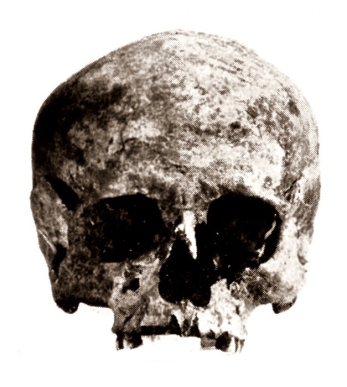 Leask’s excavation team in 1934 (top) and (left) his drawing of the headless skeleton as found; (right) the separated skull of the ‘witch’

I am fascinated that ‘folk’ or oral traditions survive through generations, centuries and even millennia. In the case of Labbacallee, we know that the name existed back in Aubrey’s time – over three hundred years ago – and was undoubtedly well established by then. Could it be that the name – ‘bed of the witch (or hag)’ – was the persisting memory of the interment of an important person, perhaps a priestess or shaman, from very ancient times?

The Hag’s Bed – the main chamber in the monument, where the skull was found

While the excavators were exploring Labbacallee they found evidence to suggest that the tomb (or part of it) had been an occupied dwelling at some point during its history. The notion that some historic and prehistoric monuments were (or are still) the dwelling places of the Old Ones, or The Other Crowd – supernatural beings possibly descended from ancient invaders of Ireland – or had in fact been used in some way by practitioners of magic – is not unknown. Borlase’s 1897 work on The Dolmens of Ireland… included this illustration (albeit from the Netherlands) of ‘A ‘White Woman’ (wise woman or witch?) prophesying from a dolmen-mound’. It’s not a big leap to the idea of a witch being buried in a wedge tomb.

Legends specific to a ‘hag’ of Labbacallee suggest that she was married to a druid, Mogh Ruith, who ‘had an eye’ for the hag’s sister. In a fit of jealously the hag chased the druid towards the River Funchion. He reached the water and started to cross it: the hag threw an enormous boulder which struck the druid, toppling him and pinning him down under the water. As far as we know, he’s there to this day!

Another story specific to Labbacallee also involves a drowning – and a warning! This version is from theirishplace.com:

…Whatever the provenance and history of the remains found in the Labbacallee Wedge Tomb, there is no doubt that it is a site around which legends abound. One of the most pervasive legends tells that one day, very long ago, four local men went to the tomb in the middle of the night, with the aim of digging for the treasure that they had heard was buried there. As they started to dig, it is said that an enchanted cat appeared, fire bursting from its tail, terrifying the men, who were dazzled by the light emitting from it. Panicking, they ran screaming from the scene, and in the ensuing panic one fell into the nearby river (Funchion) and drowned. The remaining men lived to tell the tale, and their experience stood as a stark warning to others that they should never, under any circumstances, disturb the resting place of the long dead at this most mysterious of megalithic sites… 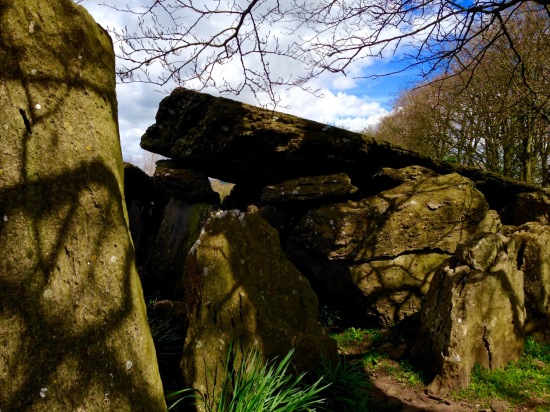