Straide, Co Mayo – Michael Davitt’s statue outside the museum dedicated to him

On our recent travels in Mayo we chanced upon a little museum in a rural situation. I was fascinated by the setting: housed in an old church adjoining the ruins of a 13th century abbey (which itself has some fine medieval carvings). The church has been restored specifically to accommodate the museum, which tells the story of Michael Davitt – who was born close to the site of the museum in 1846, and was buried right behind it in 1906. 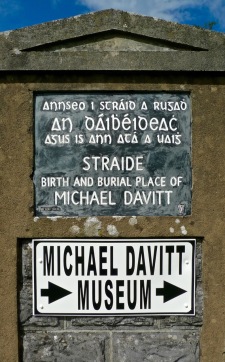 Sixty years: a relatively short life – but years filled with remarkable achievement pursuing the causes of basic human rights and of freedom for Ireland. Years filled, also, with considerable hardships.

The village of Straide, in County Mayo, was hard hit by the famine – The Great Hunger – when Michael was born: a disaster that led to starvation and forced emigration for millions of Irish people. The Davitts were no exception to this. When he was only four years old Michael witnessed his own family being evicted from their cottage because they were unable to pay the rent to the landlord. He watched while their few possessions were piled on to the lane and their home was flattened. 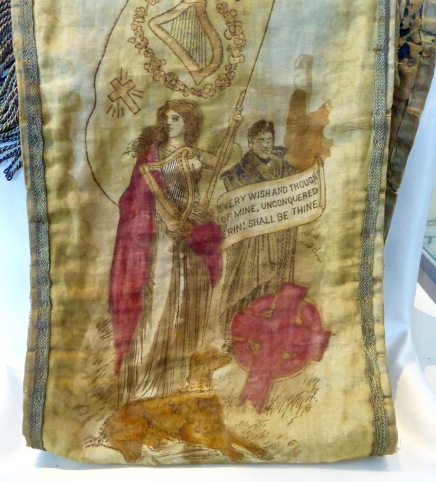 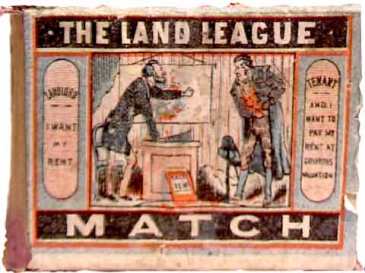 Evicted families had little choice: starvation, the workhouse or emigration. The Davitts took the latter course, arriving in Liverpool in November 1850. From there they travelled on foot to Haslingden in Lancashire and settled in the closed world of a poor, Irish immigrant community with strong nationalist feelings and a deep hatred of ‘landlordism’.

At the age of ten, Michael was sent to work in a local cotton mill. At the age of eleven his right arm was entangled in the machinery of a spinning machine and had to be amputated. There was no compensation for accidents suffered by child labourers in the Victorian world, nor – indeed – very much concern or compassion for the conditions suffered by the working classes generally in the British Empire at that time.

Michael was fortunate as his plight was noticed by a local benefactor, John Dean, who helped him to gain an education in a Wesleyan school. When he left the school at fifteen, Michael Davitt secured a job in a post office and learned to become a typesetter. He also started night classes at the local Mechanics Institute and used its library, where he read extensively about Irish history, contemporary Irish life and radicalist views on land nationalisation and Irish independence.

One of Michael Davitt’s campaigning newspapers

In 1865 Michael joined the Irish Republican Brotherhood. Two years later he left his job to devote himself full-time to the IRB, as secretary for Northern England and Scotland, organising covert arms smuggling to Ireland. He was arrested in London in 1870, convicted of treason and sentenced to 15 years of penal servitude in Dartmoor Prison.

While imprisoned he came to the conclusion, recorded in his Leaves from a Prison Diary, that violence was self defeating and he became an advocate of agitation through non-violence: years later  Mahatma Gandhi cited Davitt as a major influence in the creation of his own peaceful resistance movement. 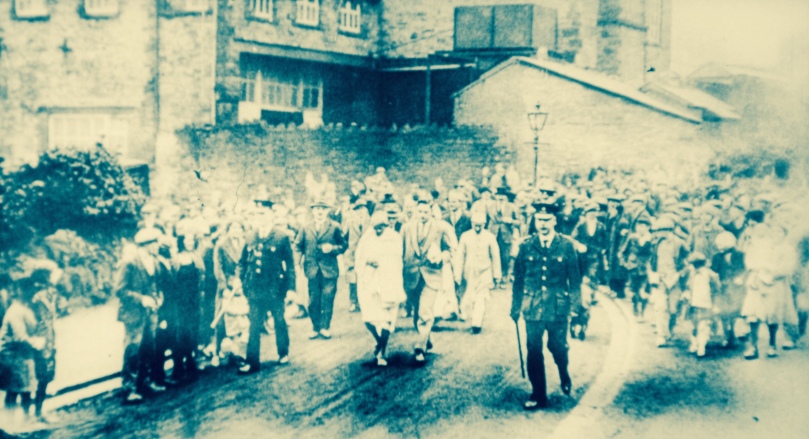 Eventually in Westminster the Irish Parliamentary Party began to campaign against cruelty inflicted on political prisoners and pressed for an amnesty for detained Irish nationalists. Partially due to public furore over their treatment, Davitt and other prisoners were released in 1877 on a ticket of leave: Michael had served seven and a half years. He and the other prisoners were given a hero’s welcome when they returned to Ireland.

‘Licence to be at large’

For the rest of his life Michael Davitt was devoted to the causes he believed in. In Ireland the Land League became a reality and eventually Irish tenant farmers were enabled to buy their freeholds with UK government loans through the Land Commission. County Councils in Ireland were also able to build over 40,000 new rural cottages, each on an acre of land. By 1914, 75% of occupiers were buying out their landlords. In all, over 316,000 tenants purchased their holdings, amounting to 15 million acres out of a total of 20 million acres in the country. This set the pattern of small owner-occupied farms that we see all around us today in rural Ireland – a system that has long struggled to be economically efficient, but which allows independence and self-pride, which the landlord system certainly did not.

Michael Davitt was not able to see the realisation of his vision for Ireland, but he played an important part in the movements that enabled it: many historians say that his role was central to it. Such were his energies and beliefs that he involved himself in universal human rights movements, and advocated for more than just the oppressed Irish. He said women should have the right to vote; he spoke out for labour unions and helped found the British Labour Party. He served in Parliament, wrote numerous books, founded newspapers and travelled the world speaking for the underprivileged everywhere. He spoke out against anti-Semitism and supported the Boer fight for freedom in Africa.

I had never heard of Michael Davitt (Finola had): it seems his name was erased from Irish history for a while because of disagreements with other campaigners. Fortunately, that wrong has now been righted, and we have this museum in his memory – celebrating his life and work and open seven days a week all through the year. There is a life-sized bronze statue outside it. Recently a new bridge in Mayo has been named after him. As a man he didn’t seek personal acclaim: he wanted his funeral to be unassuming, yet over 20,000 people filed past his coffin. At Davitt’s grave a Celtic Cross in his memory bears the words Blessed is he that hungers and thirsts after justice, for he shall receive it.

Davit wrote in his will: To all my friends I leave kind thoughts, to my enemies the fullest possible forgiveness and to Ireland an undying prayer for the absolute freedom and independence which it was my life’s ambition to try and obtain for her…

For his group, Patrick Street, musician Andy Irvine penned a song about Michael Davitt: his memory lives on…

O Forgotten Hero in peace may you rest

Your heart was always with the poor and the oppressed

A prison cell could never quell the courage you possessed