We are standing in one of the most beautiful places in the world… Or so it seems to us on this late November day as a cloudless sky casts an azure sheen over the whole sea stretched out between the Sheep’s Head and the Mizen, while the folds of the mountains behind are painted an indescribable autumnal gold by the low sun. 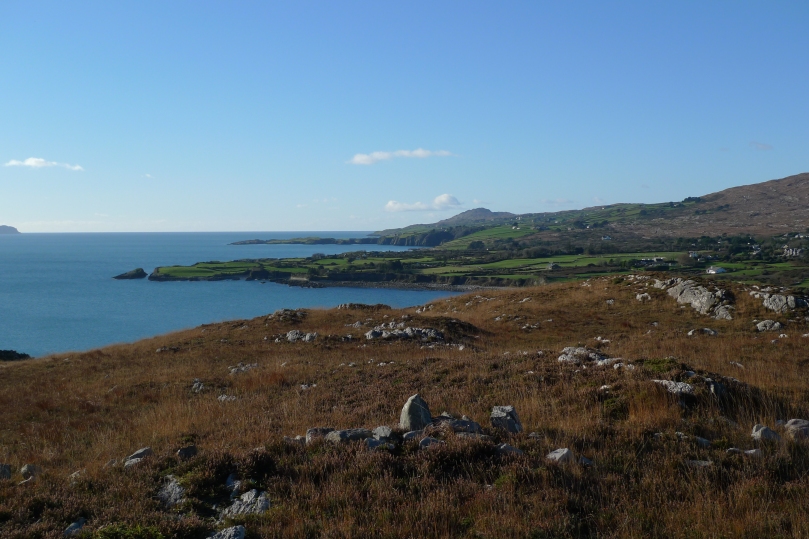 We decided today that our Sheep’s Head walk would be by the water, and chose to start at Dromnea – where we were intrigued by mention of an old Bardic School. This is listed in the guide book, together with the nearby castle of the O’Mahony’s: both are picturesque ruins. In Feudal times, when they flourished, students of the school would serve a seven year apprenticeship which consisted of spending hours in a darkened cell composing poetry which was later read out to and critiqued by the whole company. They carried the traditions and history of families and communities, to be recited on their travels around the countryside, where hospitality for bards and minstrels was obligatory. The Dromnea School was owned and run by the O’Daly family, traditionally bards to the O’Mahony’s. The most famed of the poets was Aenghus O’Daly – also know as the Red Bard – who died in 1617. He is best remembered for his work – Tribes of Ireland: A Satire. As ‘research’ for our walk I read this – an 1852 edition available online: in a hundred or so verses Aenghus tells of his travels around the four provinces seeking hospitality from the ancient families of Ireland, as was the right of his profession. The whole work is a list of complaints as to how lacking the hospitality actually was. For example:

The tribe of O’Kelly—the screws whom I hate

Will give you goats’ milk, mixed with meal, on a plate

This hotch-potch they’ll heat with burnt stones, and how droll some,

Among them will tell you ’tis pleasant and wholesome.

Three reasons there were why I lately withdrew

In a hurry from Bantry: its want of a pantry

Was one; and the dirt of its people was two;

Good Heavens! how they daub and bespatter

Their duds! I forget the third reason. No matter…

And a worm, or a grub, is scarce to be found

Still don’t visit the O’Keeffe; rather brave the hard weather –

He’d soon bring your breast and your back-bone together.

Such was the reputation of the Dromnea Bards that the King of Spain sent two of his sons to the School to receive their education. They were both drowned while swimming in the lake by the castle: the story tells that they were turned into swans. We leave the ghosts of the school behind us and reach Lough Farranamanagh – a tranquil stretch of fresh water which flows out to the sea. We look across to the few stones that define the O’Mahony stronghold: sure enough, floating serenely in front of it are two stately swans.

After passing the time of day on the beach with a periwinkle collector (she exports great tubfuls of them to France) we walk for three hours, leaving the coast behind and going up into the the hills where we come across further ruins: this was once a village, and lazy-beds and ancient field systems are visible in the rocky moorland terrain. Finally we descend back to the now defunct old Ahakista – Kilcrohane road: a remote green trackway that has been given a new lease of life as one of the Sheep’s Head Way walking routes. This brings us back foot-weary but satisfied to our starting point after our tour through an intellectual and historical landscape in stunning West Cork.

A Bard of the Cornish Gorsedd