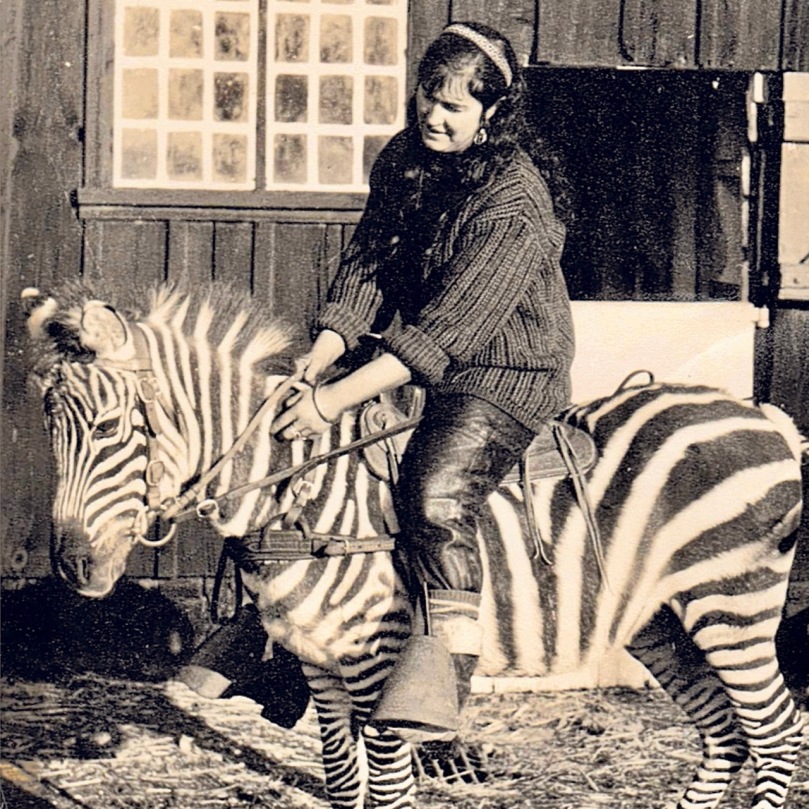 Have you ever met a Zorse? That’s a cross between a zebra and a horse. Probably not… But I have met the lady who invented them (above)! And, by quirky chance, she’s one link between Ireland and the group of artists who formed the ‘St Ives School of Painting’, Cornwall, in the twentieth century. You already know from last week’s post that the forthcoming exhibition in Uillinn, Skibbereen – West meets West, opening on 3 June, celebrates the historic connections and similarities between these two western outposts of Britain and Ireland, explored through the medium of art. 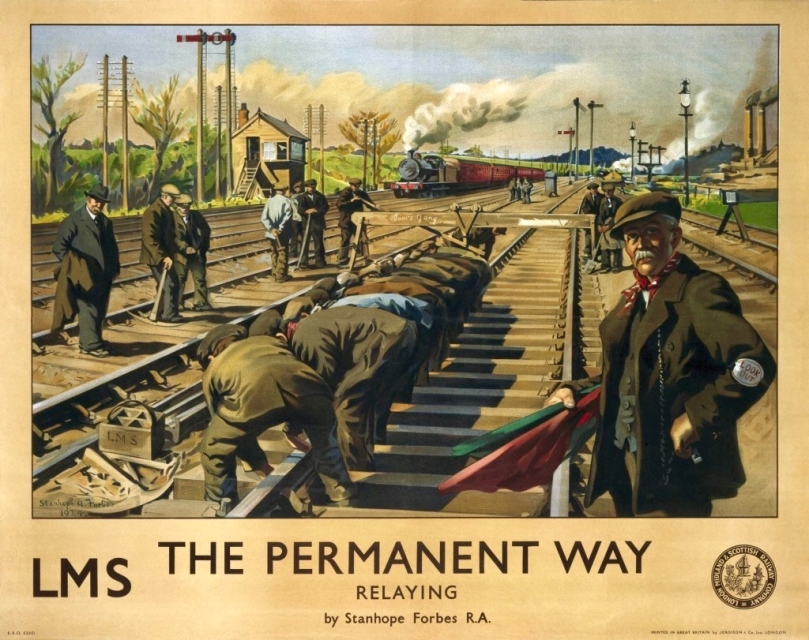 I was pleased to find this poster (produced for the London, Scottish and Midland Railway Company) by Stanhope Alexander Forbes, an artist who was born in Ireland but spent most of his long working life in Newlyn, Cornwall

It was the coming of railways from the capital to Cornwall (arriving to Penzance in 1860, and to St Ives in 1877) that opened up the far south-west of Britain to tourists – and to the artists who were drawn to this hitherto remote and unspoiled ‘rural idyll’. They were particularly attracted to the picturesque fishing villages, and rather overlooked the equally interesting and visually dramatic mining communities which were the centre of the county’s economy in the latter years of the nineteenth century. 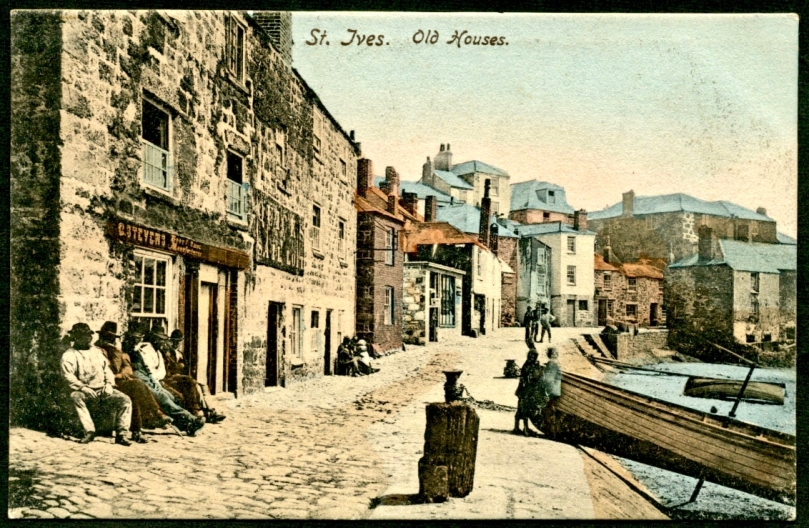 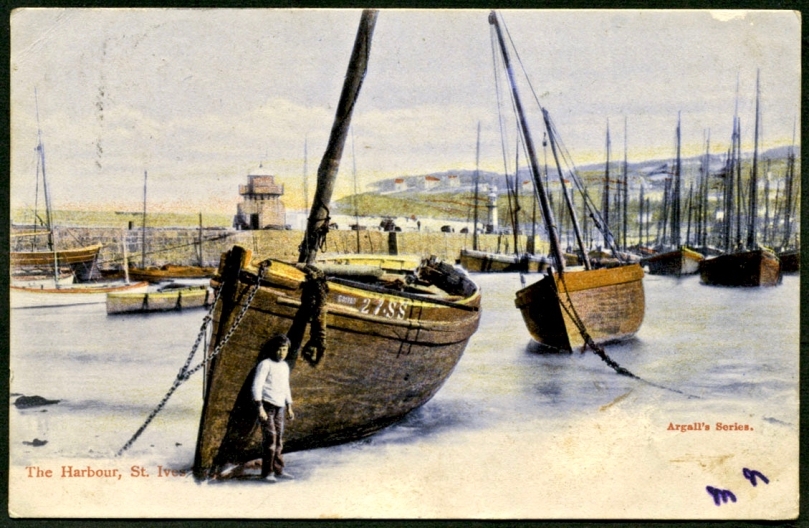 The first art gallery in St Ives opened in 1887, and an art school was opened the following year. By the time the photographs on the postcards above were taken, there were ten private schools of painting in the town. The development of St Ives as a national (perhaps even international) centre for ‘modern art’ began after the Great War when Ben Nicholson and Christopher (Kit) Wood visited and ‘discovered’ the seafarer and naïve artist Alfred Wallis, who spent his retirement years painting nautical scenes on old fish boxes, driftwood and even scraps of cardboard.  They found his small cottage (now marked by a plaque) filled with these images, many of them (to the artists’ horror) attached to the walls by nails driven through their centres. 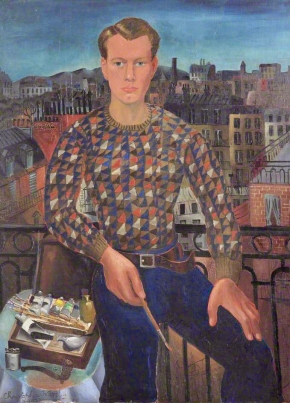 As the century progressed and another European war loomed, remote St Ives became home to many artists – some conscientious objectors, others just escapists. It made for a cosmopolitan mix. Ceramicists Bernard Leach and Hamada Shoji arrived from Japan in the 1920s. Many potters from all over the world were apprenticed at the Leach Pottery (which exists today in St Ives and is also now a museum), and spread Leach’s style and beliefs. At the outbreak of war in 1939 Nicholson (then the centre of the London based British avant-garde movement) returned with his wife, sculptor Barbara Hepworth, followed by their friend Russian Constructivist pioneer Naum Gabo and his wife Miriam. To quote the history pages of the St Ives Society of Artists:

…Soon Cubism, Futurism, Constructivism, eastern philosophy, true naïveté and the English marine tradition were being discussed behind the blackout curtains of the town. The place was a hotbed of creativity and its importance grew… 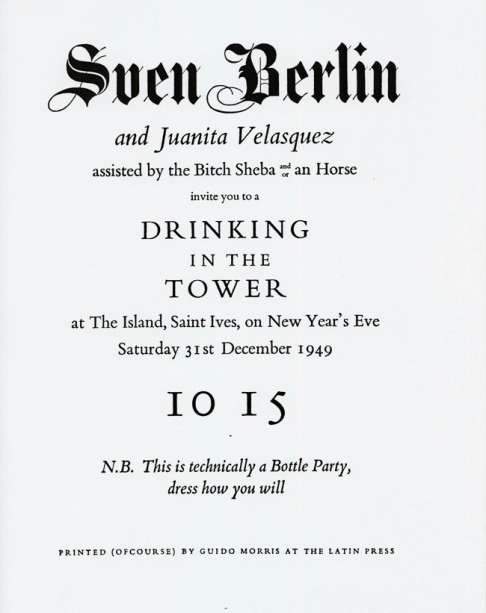 Post-war, the artists’ community expanded, and changed. The names we now remember from the mid-century years include Sven Berlin, Peter Lanyon, Roger Hilton, John Wells, Patrick Heron, Terry Frost and many others. A good insight of what life was like there is given in the entertaining autobiographical notes of Irish artist Breon O’Casey, son of playwright Sean O’Casey:

…One day, watching television, sometime in the late fifties, I saw a film about Alfred Wallis, a primitive painter who had lived at St Ives in Cornwall. The film showed St Ives and the studios of some of the artists living there. I realised it was the place for me… Ah St Ives! In those days still a working fishing port, with tourism and art only tolerated, but kindly tolerated. The relief of mingling with other crazy artists was enormous. It was literally as if a great weight was lifted from my shoulders. This is exactly how it felt. One must remember the strong antagonism to modern art then, and the nervous energy used up resisting it… One was with a group of people who were hoping to make a living from their art and indeed some were professional artists. That times were hard mattered little. If no one has much money it doesn’t matter. And I certainly never experienced the depths of poverty and the necessary determination to survive it, that my father had experienced. Nor indeed did I face the privations that, as one reads, Matisse faced, never mind those suffered by the true early warriors, Van Gogh and Gauguin… My studio was in a ramshackle, wooden structure tucked in behind other similar studios facing out over Porthmeor beach to the wide Atlantic. I slept in a curtained off alcove at one end – illegally – and in the winter the thud of the great waves would shake the whole crazy structure like a dog shaking a rat. It was kept standing by the law of inertia which says: if an object has been in one place for a number of years, it will resist, of itself, natural physical forces trying to move it…

Peter Lanyon was one of the most influential artists in the St Ives School during his working life. He was a native of the town – born in The Red House, Bellyars, St Ives in 1918. Both his parents came from families who were connected with mining. Lanyon was a teacher and an artist. Irish artist Tony O’Malley (1913 – 2003) received his only formal art education from Peter Lanyon and, after Lanyon’s death in 1964, O’Malley dedicated all his work to his friend and mentor. Irish sculptor Conor Fallon (1939 – 2007), a friend of O’Malley and O’Casey, was also inspired by Peter Lanyon’s work and spent some years in St Ives before moving back to Kinsale. Lanyon claimed that he sought in his work to ‘get under the skin’ of his native county and explored it by going underground in the mines and flying over it in a glider. Lanyon died as a result of a gliding accident; the work of one of his sons – the late Matthew Lanyon – will feature in the West meets West exhibition in June this year. 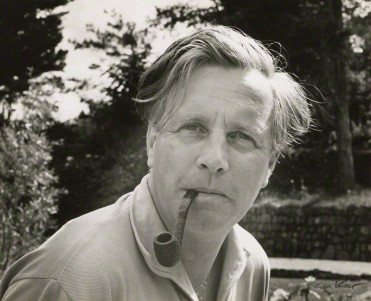 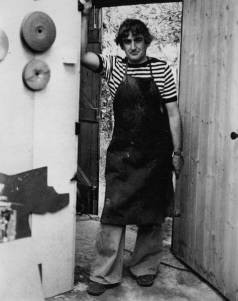 This post is a necessarily brief historical summary of the St Ives artists and their influences on the annals of art in the islands of Britain and Ireland. Many important names have been omitted. But we cannot leave the subject without mentioning Sven Berlin – and coming back to the Zorse!

‘The Dark Monarch’ – a fictionalised novel by Sven Berlin that characterised and defamed many of his fellow artists in the St Ives colony – they drummed him out of town! Right – Juanita Casey, Berlin’s second wife (photo Dolmen Press)

Sven Berlin (1911 – 1999) was a colourful and controversial addition to the St Ives group. Born in London, he came to Cornwall in 1938, meeting with Nicholson and Hepworth and writing the first book on the life of naïve artist Alfred Wallis. While there he met Juanita (1925 – 2012), who was named by her uncle after his favourite circus lion. Her mother, an Irish Traveller, had died in childbirth and her father, an English Romany, had given her up for adoption. She joined a circus at the age of 13, beginning a lifelong obsession with horses. She was a writer, artist and poet and – later – a horse breeder and circus trainer. She spent some years working on boats in Penzance and exhibiting paintings in the Newlyn Gallery, and there she became involved with Sven Berlin; they married in 1953. Soon after, Sven was ostracised from St Ives and they travelled in their Romany caravan to the New Forest and lived for a while in the Shave Green Gypsy community. 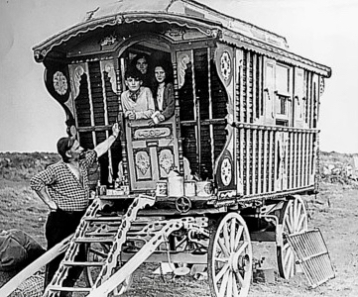 Sven Berlin in St Ives, left, and with Juanita and their family in their Gypsy wagon

The marriage broke up when Juanita met and eloped with a groom, Fergus Casey. While with him she trained and rode zebras and embarked on her project to produce the Zorse – apparently unsuccessful.  Her lifestyle was forever Bohemian. Her obituary in the Independent newspaper observes:

…Casey wrote that her children looked upon her “the way steam enthusiasts admire a hissing antique boiler.” Often, she would be the first to admit, her creativity and spontaneity took over from her domestic duties and responsibilities…

Fergus, a journalist, was drowned in Galway and Juanita, with her daughter, Sheba, continued to travel – firstly to Sneem in Co Kerry, and then to Okehampton in Devon, England where she once again joined the circus, as a horsemaster. I met her in Okehampton when she was in her eighties, and was fascinated to listen to many of her incredible stories – although while telling them she was always keeping half an eye on her television set in the corner, which was always on and always tuned in to the horse racing channels!

Below, Juanita Casey, living in Okehampton, Devon, in her eighties and an illustration from her novel  The Selene Horse 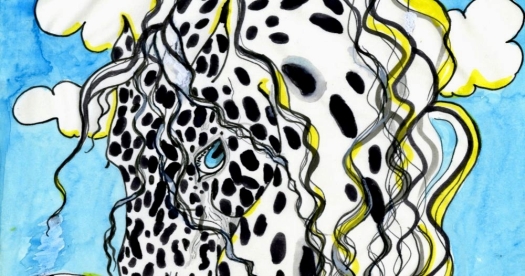