In my time browsing and photographing stained glass windows I have come across many WWI memorial windows in Protestant churches, but only three in Catholic churches – an extraordinary ratio, given that over two hundred thousand Irish men fought in that war, with Catholics far outnumbering Protestant Irish soldiers (simply because they represented a far greater portion of the population). It is estimated that thirty five thousand Irish soldiers died in that conflict. 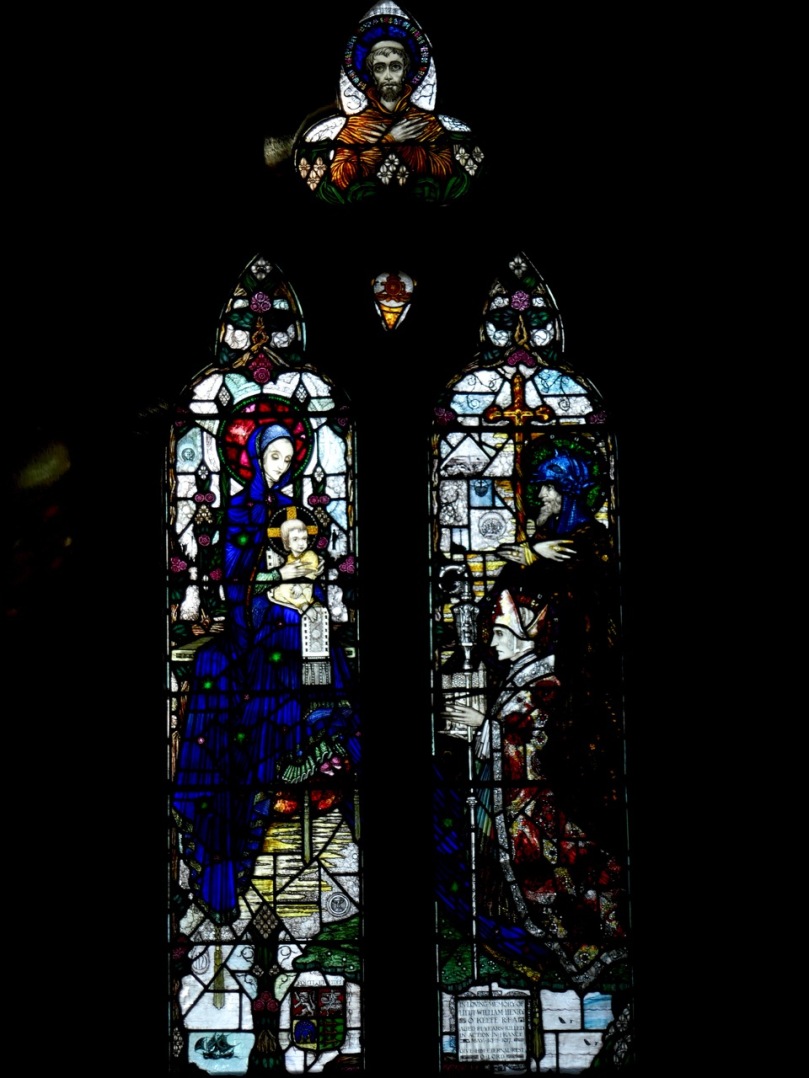 The O’Keefe War Memorial window in the Church of the Assumption, Wexford town, by Harry Clarke (above, and detail top image)

There are many reasons for the lack of memorials in Catholic churches – for example, the vast majority of Irish soldiers in the British Army came from poor families who could not have afforded such a memorial. But also it has to do with the collective amnesia we developed about our participation in British wars. As I wrote in Outposts of Empire, returning soldiers came back to a new Ireland, one in which nationalist aspirations dominated, and many young Catholic men preferred not to speak about their British Army service.

A figure, possibly St Anthony, in the top tracery light of the O’Keefe window

But the three windows I have seen are beautiful and interesting, using some different icons from so many Church of Ireland windows, which tend to feature Michael the Archangel defeating the dragon or a knight in armour fighting “The Good Fight” with regimental standards and lists of engagements in the bottom panel. 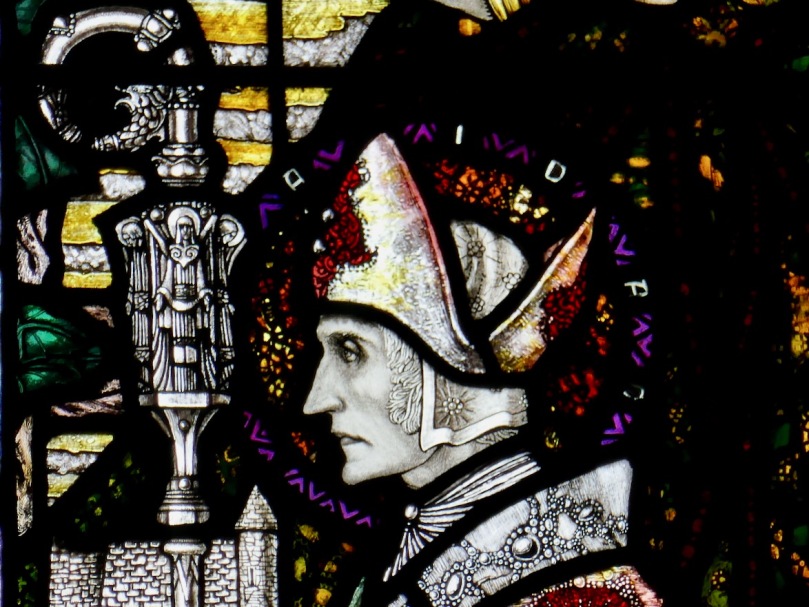 I have started with everyone’s favourite, Harry Clarke, who designed and executed this window in the Church of the Assumption in Wexford town. The fallen soldier was 21 year old Lieut Henry O’Keefe and Harry travelled to Wexford in Sept of 1918 to meet his mother and discuss the window, which was installed the following year.

The design is classic Harry Clarke. Serenely floating high on the left panel is the Madonna and child, clothed in an elaborate and bejewelled blue gown which extend across to the second panel where two saints have come to pay homage. The image of the Madonna evokes the bond between mother and child, while the two saints are carefully chosen: St Adrian is the patron saint of soldiers and St Aidan of Ferns represents Wexford. Above, in a tracery light, a monk, possibly St Anthony, gazes out in an attitude of prayer.

The O’Keefes were a prominent Wexford merchant family and their coat of arms is shown in one panel. Numerous tiny details – a ship, leaping fish, crucifixion images, a tiny image of the Church of the Assumption itself, as well as Harry’s ubiquitous floral ornamentation, fill every section. The overall result is highly emotive. I can imagine the O’Keefe family visiting often and finding comfort in the beauty and compassion of the imagery.

Harry Clarke designed two WWI memorial windows simultaneously and they are completely different. Above is the cartoon for the O’Keefe window and, on the left, for a window, Angel of Hope and Peace, for the Holy Trinity Church of Ireland in Killiney, Co Dublin

Our second example is from the West Cork Church of the Immaculate Conception in Enniskeane. Probably by Watsons of Youghal, this window is a memorial to Dr Thomas J Fehily, a native of the parish who qualified and practised medicine for many years before enlisting. 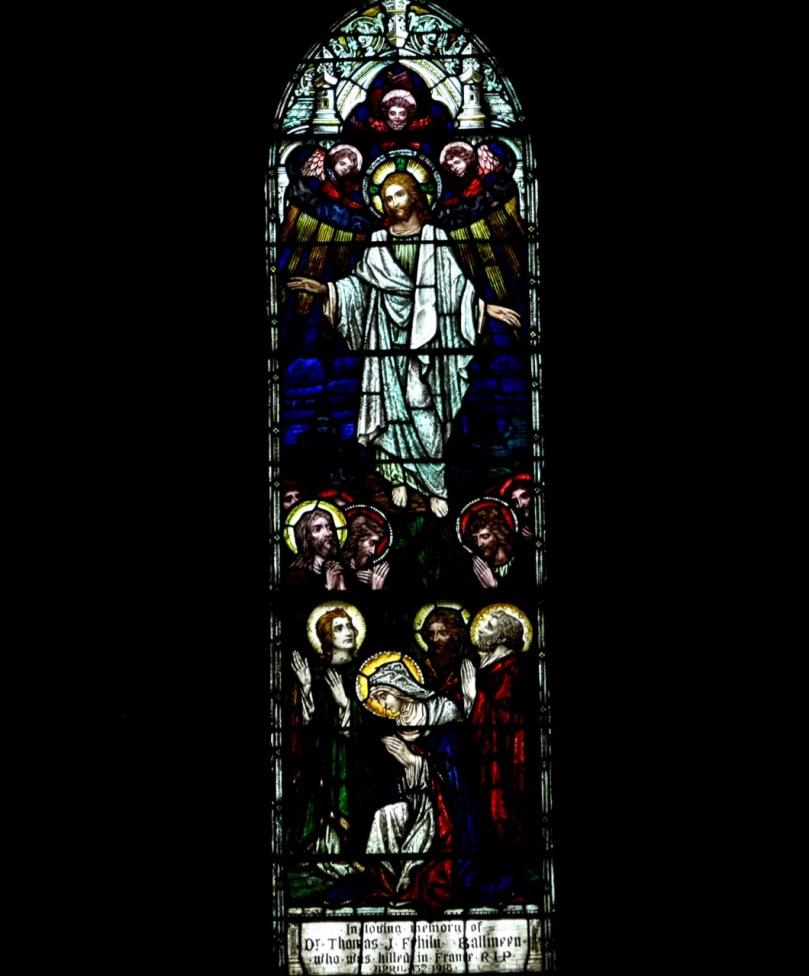 Local historian, Anne Lynch has given a good account of his life in a Southern Star article. She writes, Ballineen was a long way from the action when World War I started in the summer of 1914. However, two local brothers, both medical doctors, saw the war as an opportunity to utilise their medical skills. In doing so, it cost one brother his life, while for the other, it was the start of an illustrious career in the British Empire. The doctors were the Fehily brothers.

This is an Ascension window and at first I was puzzled by this choice for a war memorial window but as I thought about it, it became clear – Jesus ascends to heaven having sacrificed his life for his fellow man, while his sorrowing mother weeps below.

The final window is in the neo-Romanesque church of Spiddal in Co Galway and is dedicated to the memory of George Henry Morris, a hero of the war, and second son of Lord Morris.  A painting of George Henry by William Orpen ends this post.

There is an affecting account of a visit to his grave by his grandson Redmond Morris with his own children, where they even manage to take a photograph in the very spot that George himself was last photographed. By all accounts a brilliant man and a highly respected officer, George died within two weeks of arriving in France. Read more about him on his Wikipedia page and note that he was the father of Lord Kilanin, for many years the esteemed President of the International Olympics Committee.

The window is by Catherine O’Brien, one of the artists of An Tur Gloine.  See this post about Loughrea Cathedral for more about this design co-op: Edward Martyn was also involved with the design and furbishment of this Spiddal church. O’Brien has depicted a golden-haired figure reaching upwards to a divine light, with the words lux perpetua luceat ei – Let Perpetual Light Shine Upon Them. The figure is a rider (denoted by his spurs only) and a riderless horse is seen at the bottom right. The location in Connemara is captured with thatched cottages and sea cliffs.

One of our most famous War Dead was the poet, Francis Ledwidge. His poem, A Soldier’s Grave, has given me my title, and I will leave it here now in honour of the many brave Irish men who gave their lives in WWI.

Then in the lull of midnight, gentle arms
Lifted him slowly down the slopes of death
Lest he should hear again the mad alarms
Of battle, dying moans, and painful breath.

And where the earth was soft for flowers we made
A grave for him that he might better rest.
So, Spring shall come and leave its sweet arrayed,
And there the lark shall turn her dewy nest.