Birthplace of a Folk Hero

T’was on an August morning, all in the dawning hours,
I went to take the warming air, all in the Mouth of Flowers,
And there I saw a maiden, and mournful was her cry,
‘Ah what will mend my broken heart, I’ve lost my Laughing Boy’

Let’s face it: our travels today were a pilgrimage. We went out in search of a hero and we found shrines, monuments, places of devotion and folktales. It all started last week, which was ‘Rebel Week’ in Cork County and Skibbereen was one of the centres of activity. We were attracted by a flyer for a ‘Tribute to Michael Collins’ being held in the Eldon Hotel – a venue which we now know features in the story of the man: it claims to be the place where he ate his last meal. The ‘Tribute’ proved a bit of a damp squib as the advertised speaker didn’t turn up, but as compensation we were shown a 1973 British film made and zealously narrated by a very ebullient Welsh actor, Kenneth Griffith: Hang Up Your Brightest Colours. This film extravagantly documents the life of Michael Collins and the Irish struggle for freedom in the early twentieth century, and was considered ‘incendiary’ in a time when The Troubles were boiling over; consequently its showing was banned for twenty years. We determined to visit some of the significant locations that featured in the film and which are not too far away from Nead an Iolair. 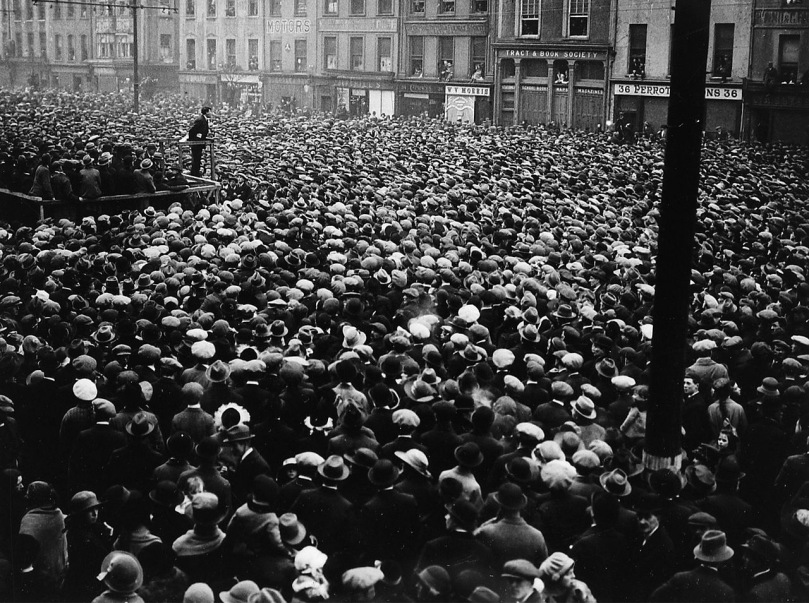 West Cork is Collins’ country: he was born in Sam’s Cross, near Clonakilty – the youngest of eight children – in October 1890. His father Michael had married Marianne O’Brien (23) when he was 60. Already the folklore kicks in: Michael the elder was the seventh son of a seventh son and therefore gifted with powers of divination. On his deathbed he predicted that our hero – then aged 6 – would one day “…be a great man. He’ll do great work for Ireland…” Also, there’s a touch of mystery about Collins’ birth: the records state he was born on 16 October whereas on his tombstone the date is given as 12 October.

The Collins grave in Rosscarbery

In the burial ground in Rosscarbery we found the family grave. There is a modest entry on the headstone for young Michael, recording that he died on 22 August 1922 (he’s actually buried in Dublin). That’s about all that’s modest about the Collins story. He was known as The Big Fella, as much because of his reputation and charisma as for his physique.

You can’t miss his birthplace – it’s signposted for miles around the area of Woodfield – but the family farmhouse isn’t there! It was burnt to the ground by the Auxiliary Division of the Royal Irish Constabulary in 1920, during the Irish War of Independence (and not by the Black and Tans, which is often claimed). However, the site has been preserved as an essential waymark of the Michael Collins pilgrim trail. 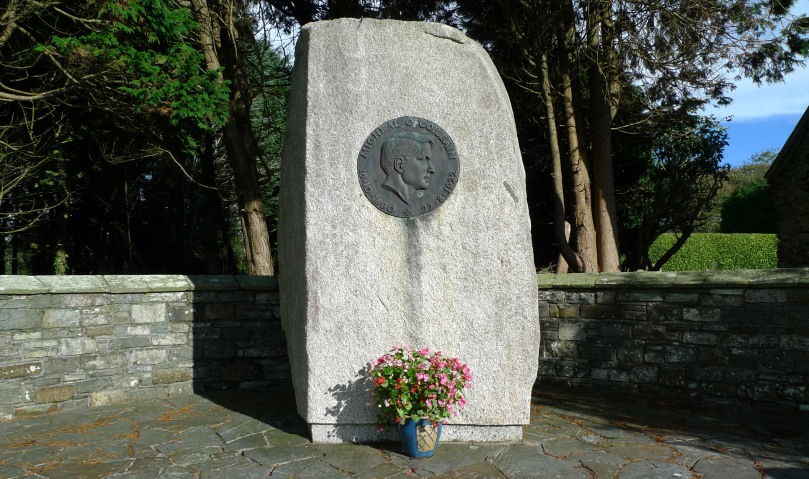 There is also another, larger monument to Michael a little way up the road at Sam’s Cross – this is in fact next door to the house where his mother was born – and opposite his cousin Jeremiah’s pub – The Four Alls (this is one of several places where Collins is supposed to have taken his last drink).

For anyone who doesn’t know I had better just say that Michael Collins – soldier, freedom fighter and politician – was one of the key figures in the long Irish struggle for Independence – a conflict that was won, after a fashion, in December 1921 when the irish Free State was set up. Collins signed the Treaty in his then role as ‘Chairman of the Provisional Government and Commander-in-chief of the National Army’ and (legend has it) pronounced that he was also signing his own death warrant (the great folk heroes usually foretold their own death). The conditions of the Treaty, and the exclusion of some of the northern counties from the new state caused such dissension that a civil war ensued, and Michael Collins fell as a victim to that war as he toured through his home county of Cork on 22 August 1922.

His convoy left the Eldon Hotel, Skibbereen, in the early afternoon for Cork city and was ambushed at Béal na Bláth, on a minor road between Clonakilty and Macroom. During the skirmish Michael Collins was shot in the head and died instantly. He was the only casualty of that confrontation.

Béal na Bláth may mean ‘Gap of the Blossoms’ but there is some debate as to its correct translation: ‘Mouth of the Ford of the Buttermilk’ is one suggestion. Brendan Behan, in his folk ballad on the death of Michael Collins (the first stanza of which starts off this post), goes for ‘Mouth of Flowers’. We began our pilgrimage here on a wet Sunday morning. The place had a sombre atmosphere and the monument that we found – although unmistakably Messianic – is grim. Crowds come to this site, especially on the anniversary of the assassination. A white stone marks the actual spot where he fell: the fine details seem all important.

But – sifting through these details when I was trying to assemble this piece – I realise that there is so much that is apocryphal or contradictory in the various accounts, not just of his death but with many aspects of his life. And it’s the stories that will win out in the end. Michael Collins is a real national hero – quite rightly – but he’s on his way to becoming a folk hero – something different. He could be a Saint (he did after all perform a miracle in bringing together so many different factions and feelings to found the beginnings of modern Ireland) but to me he is more likely to end up in the ranks of the great Hero Warriors of Irish mythology such as Cu Chulainn, Medb or Finn McCool – or even the Gods. I wish I could be around to hear his sagas told in a few hundred years from now.

The Fate of a Folk Hero…