Here comes himself at the head of the parade

Time for the next lesson in how to sound like you’re from West Cork! In Lessons 1 and 2 we covered like and grand, now and so – versatile words that will take you a long way in any conversation around here. Then in Lessons 3 and 4 we looked at how you would frame your sentences in the conditional tense, and how to use the pronouns ye, and himself, herself and yourself. I hope you have been practising, in preparation for your visit. You ARE coming, right? Good – well so, you would need to be moving along to the next important steps in your language development. And to help you see where you’re coming, I will illustrate these lessons with pictures of the St Patrick’s Day parade last Monday in Ballydehob.

Nothing distinguishes the West Cork denizen like the phrase in fairness. Occasionally rendered as in fairness, like or even to be fair, it is tacked on to the end of sentences with total abandon, whether it matches with the sense of what’s been said or not. If you meet someone on your walk, don’t be surprised to hear him say “’Tis a grand evening, in fairness like.” It’s as if it’s important to give God His due – He’s sent us lots of storms lately and endless days of rain, but sure, He’s doing His best to make it up to us now, isn’t He?

Sometimes you are left wondering about what’s not being said. If you hear “She’s a terrific dancer, in fairness,” you might wonder if there’s another part to the sentence, that has been left out – “even though she can’t sing,” maybe. But no, it’s probably just been added for some kind of emphasis, or to round out the sentence in some way. So go ahead, just drop it in here and there, and you’ll be grand.

Going to the creamery

Nobody in West Cork is very happy – no, we are happy out. And why wouldn’t we be, living in this beautiful place? We might also, if we have a lot to do, be busy out. If we badly need a pint, we might be thirsty out.

If using out as a modifier doesn’t trip off your tongue, try altogether instead. Or entirely.

We saw a good movie the other night. “It was great fun altogether.”

A recent story in The Examiner tells of a local hero, a student who found a toddler wandering late at night and made sure he was safe. Since the story is told mostly in dialogue, it’s an excellent example of Irish speech.

And the student, I think you will find yourself saying, “Wasn’t he a fine lad entirely?”

Don’t they look happy out?

In Irish, the diminutive is formed by putting –ín (pronounced een) at the end of a word. We tell people that we live down a boreen (Irish word for road is a bothar, pronounced bo-her, and a bothairín is a small road). I’ve written about the children’s graveyards here: a cillín, pronounced killeen, actually means a small cill or church.

Some West Cork people routinely add -een to the end of a word to convey a sense of its size. Our landscaper asked if he should put the tools in our shedeen. Our neighbour, when I asked him about a certain piece of land said it was “nothing but a fieldeen.” You may well be asked by a waitress if you’d like a biteen more coffee.

Isn’t that a grand careen?

Now so – there you are! I think you might be ready to put all of that into practice.

Announcing our second ever COMPETITION (the first one was about place names). Your task, Dear Reader, is to construct a short conversation between two individuals. They are driving in opposite directions, but meeting on the boreen they roll down their windows to pass the time of day. The big topic of the moment is the St Patrick’s Day parade in the village and this, therefore, is the subject of their conversation. Reconstruct the chat, using what you’ve learned in the seven lessons so far, and your own imagination. An astute panel of judge will pick the winners and excellent prizes will be dispatched. Actually, prize-eens, in fairness. Good luck! 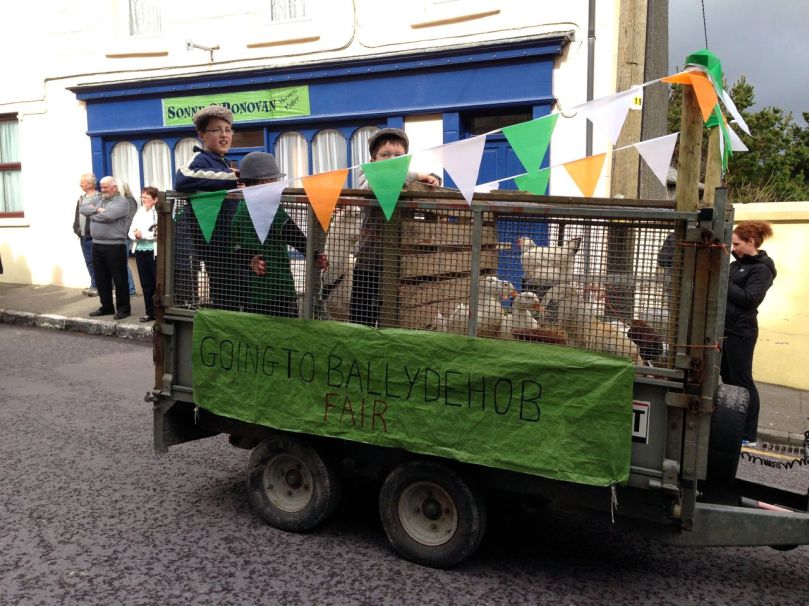