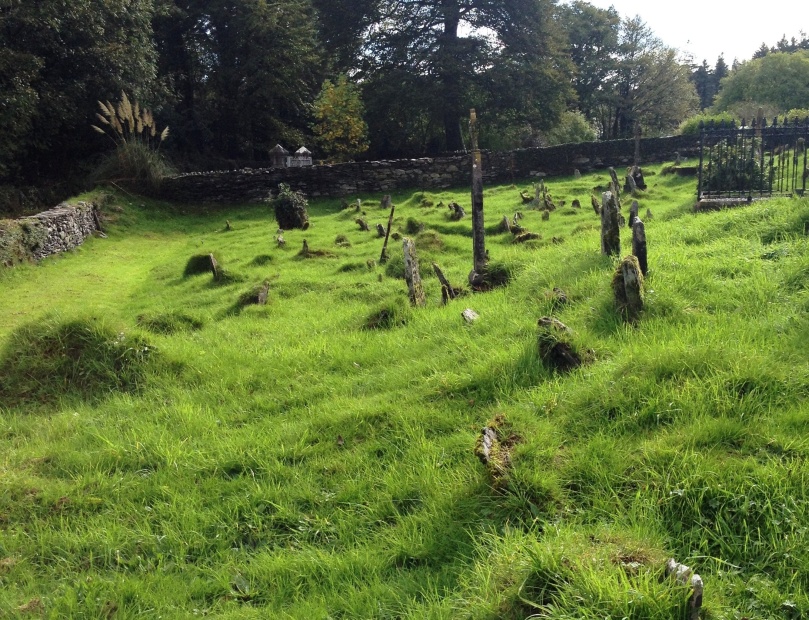 Unmarked graves in a section of a Protestant churchyard

Dotted across the countryside around us, and throughout Ireland, are the loneliest places on earth. These are the cillíní – the children’s graveyards. A cill (kill) is a monk’s cell or church site, cillín (killeen) is the diminutive and cillíní (killeenee) is the plural: small churches. Ironically, the cillíní despite their names were usually non-church sites. They were burial grounds reserved for unbaptised children (those who died before they could be baptised or were perhaps born out of wedlock), pregnant women (because they were carrying unbaptised children), unrepentant murderers, suicides, shipwreck victims and strangers – anyone, in short, who was not ‘saved’ or whose baptismal status was ambiguous or unknown. They were used into the twentieth century. Some cillíní were also used for mass burials during the time of the famine. 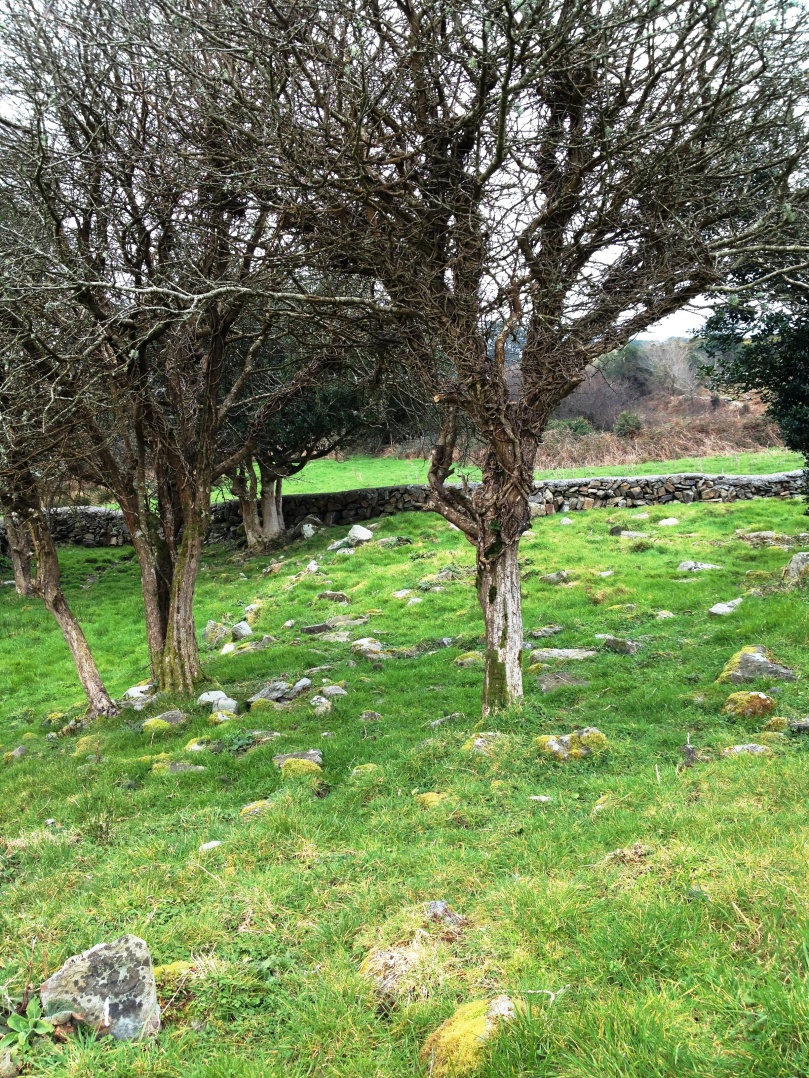 This week we attended a fascinating talk on cillíní by William Casey, a local historian. As he explained it, the teachings of the Catholic Church on where unbaptised babies go after death had evolved from a position of ‘they go to hell’ (Augustine, 4th century) to a more moderate invention of the concept of Limbo (Thomas Aquinas, 13th century) – an in-between place where these lost souls would dwell eternally, never to suffer but never to reach heaven.

An 11th century round tower watches over a graveyard; a recent plaque commemorates lost souls

This ‘placelessness’ extended to their burial: cillini were normally situated away from the what the church considered ‘consecrated ground.’ Locations often contain poignant echoes of other trapped or wandering souls: boundaries, for example, of parishes or townlands were chosen.  Sometimes cillíní are found in ring forts. Known in Ireland as ‘fairy forts’ these ancient sites were believed to be the domain of the sí, the fairy folk who also inhabited the world in between earth and heaven. The association of the ring forts with the fairies guaranteed their security – if you interfered with a ring fort bad luck would dog you from that day on.  Protestant churchyards were also used, or areas within or near abandoned or ruined church sites. Perhaps, as William put it, these choices reveal an attempt by parents to ensure their children were buried in holy ground, while still adhering to the strict rules of the Catholic Church 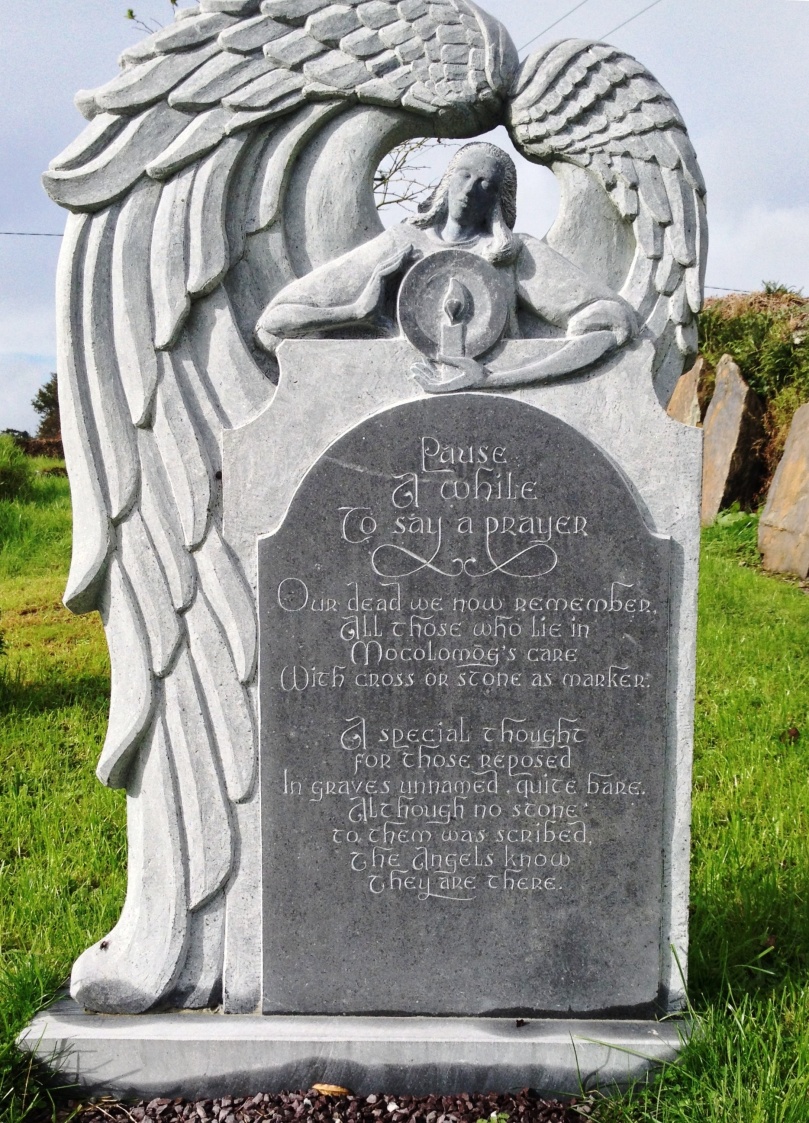 Maybe the saddest thing we learned from William’s talk was that tiny children who had died before baptism were buried at night, by lantern light, by the father and male relatives. Women had no role to play and the mother was not present. The grave was placed east-west, alongside other babies who had been buried in the same way and marked, if at all, with a small uninscribed stone. Over time many cillíní melted into the surrounding landscape and are now impossible to find. Others have been restored so that these lost souls will not be forgotten. Here, simple monuments invite us to remember. They attempt to reinstate the dignity and hope that were once robbed by the rigid beliefs of another age. 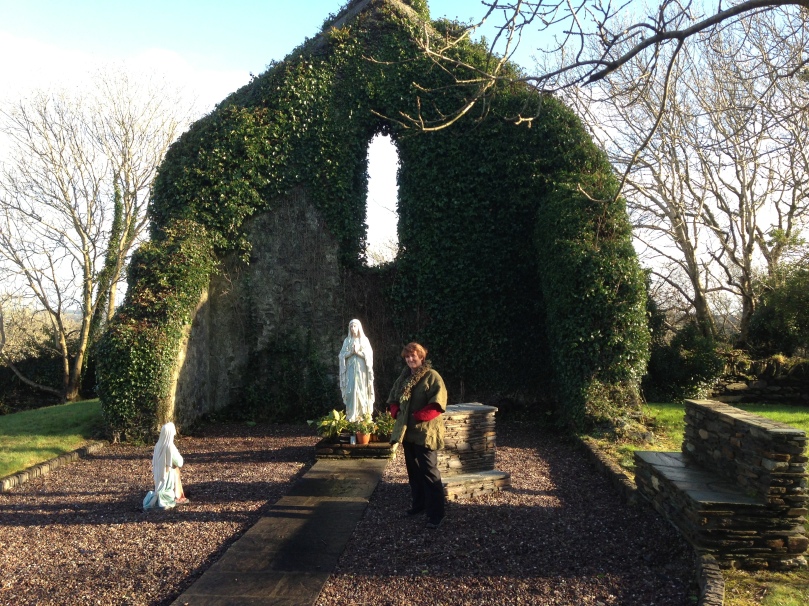