Recently, as part of the Ballydehob Country Music Festival (although the connection may be a little tenuous) we noticed posters going up around the town for a dance to be performed on the famed Twelve Arch Bridge. The dance company, Croi Glan (Kree Glan – pure heart) had more information on their website:

Professional dancers from Croi Glan, 5 musicians performing live, Croi Glan’s aerial dancers suspended from the bridge on rope and harness and aerial silks, and 40 West Cork Inclusive Dance Group community performers from COPE, CoAction and the local West Cork area, 25 of whom have intellectual disabilities, in a once-in-a-lifetime, hugely ambitious project directed by Tara Brandel, a native of Ballydehob.

Intrigued, I sought more information on Croi Glan. Here is a piece from TG4, the Irish language television station, that illustrates what the company is all about:

We arrived at the Pier to find that the whole of Ballydehob had turned out. The place was rocking, with live entertainment, gourmet hot dogs and a wine bar. While the morning had been overcast, by early afternoon the clouds had parted and brilliant sunshine added to the festive atmosphere. 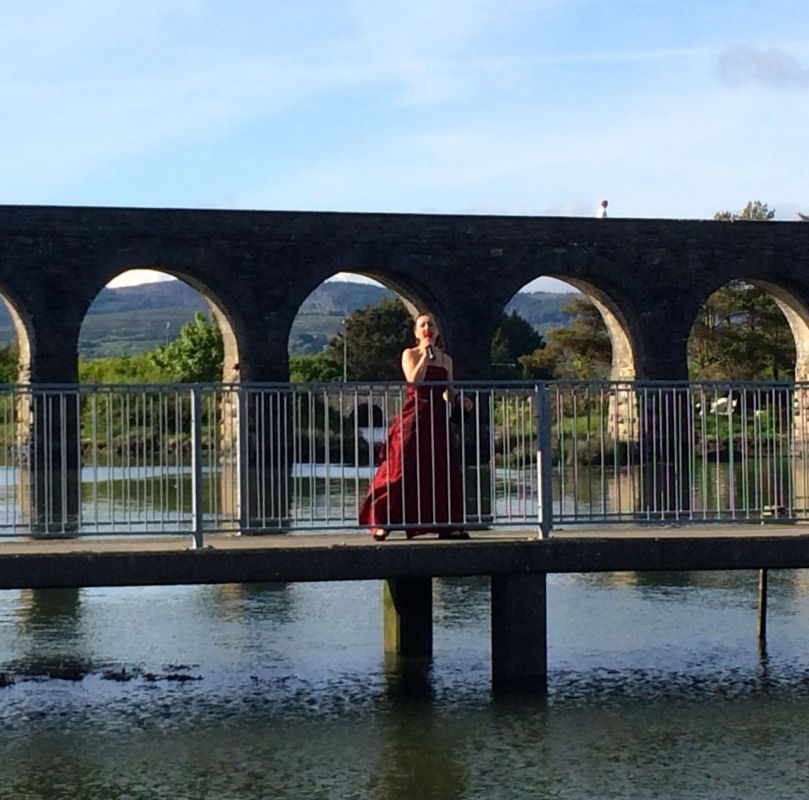 The dance started with a local singer, Siobhan Heapes, singing on the walkway over the water, calling the dancers. One by one and in groups they arrived on the walkway and we began to appreciate the diversity of the troupe – some professional and balletic, some in wheelchairs or with mobility difficulties, some with intellectual disabilities. Together, they told a story: a story of bridging and transcending differences, of supporting each each other, of honouring the part each played in the dance.

The stage became larger and larger, as the dancers occupied the green spaces around the walkway, and then moved onto the bridge itself.

Two dancers were lowered over the bridge –  a heart-stopping moment – and then yellow silks unfurled and their bodies twined and moved with the silks as we watched entranced from the Pier and Siobhan provided the haunting musical background.

The finale had all the dancers back on the walkway for one final movement together of intense communication, lifting and balancing each other, paying a last homage to the theme of Bridge. And suddenly it was over and we erupted into possibly the most enthusiastic standing ovation I have ever been a part of. It was loud, it went on and on and then on some more. Some us were in tears, all of us were smiling and turning to each other and searching for superlatives to describe what we had just witnessed.

There were flowers, and speeches. Tara Brandel said she had “never been prouder to be from Ballydehob.” We lingered, chatted with the dancers, congratulated Tara (it was hard to get close to her) and her assistant choreographer, Mary. People took a long time to disperse – something had stirred us all in that way that makes you want to hang on to the feeling as long as possible.

Perhaps it was, as Tara explains in the YouTube video above, that when you watch a Croi Glan performance, you are operating entirely in your heart.